Stop transfer of turbines to Gazprom 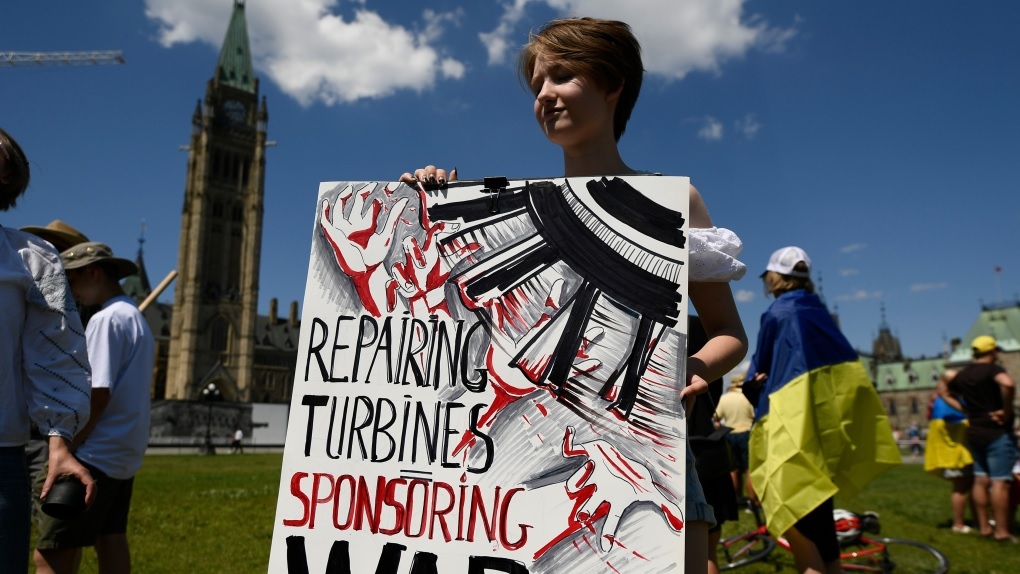 Supporters of Ukraine hold a rally against the Canadian government’s decision to send repaired parts of a Russian natural gas pipeline back to Germany, on Parliament Hill in Ottawa, on Sunday, July 17, 2022. Photo: THE CANADIAN PRESS/Justin Tang

The Government of Ukraine, the Ukrainian Canadian Congress and opposition parties in Parliament have all called upon Canada to revoke the permit issued on July 9 by the Minister of Foreign Affairs, which allows for the repair and transport of six Siemens Nord Stream 1 turbines over a period of two years to the Russian state gas monopoly Gazprom.

In fact, the whole question of supplying the other five turbines, which are still in Canada, has become moot after Gazprom, the Russian natural gas monopoly itself came out and said it won’t take them anyway.

August 3 Gazprom stated: “The sanctions regimes of Canada, the EU, the UK and a mismatch of the current situation with the existing contractual obligations by the Siemens side make delivery of the 073 engine to the Portovaya compressor station impossible.”

Germany had initially asked Canada to remove the sanctions placed on the turbine, which had been under repairs in Montreal, in order to allow for critical gas flows to Europe under Nord Stream 1. Releasing the component would remove an excuse for Russian President Vladimir Putin to keep the pipeline closed. Within days the request of one turbine was expanded to six.

Canada agreed to Germany’s demands. Federal Natural Resources Minister Jonathan Wilkinson told Parliament’s Standing Committee on Foreign Affairs and International Development, August 4, that we “have to be sensitive to the very legitimate economic concerns of the Germans, who are worried, to be honest with you, about not having fuel to heat their homes in the winter and not having fuel to be able to run the industrial parts of their economy, which would be a disaster for all of Europe if that were to happen.”

How much of a disaster this would be we don’t know. Suffice to say it would be nowhere near the disaster Ukraine faces every day with continuous bombing of civilian targets, the mass murders that result, the mass rape by Russian soldiers of civilians, the torture of prisoners of war, the total destruction of civilian infrastructures. In short – a deliberate and methodical campaign of genocide. All these crimes against humanity are financed by Russia’s energy sales.

A somewhat honest if cynical explanation was given by Germany’s Ambassador to Canada, Sabine Sparwasser who stated: “The reasoning behind our request is simple. Our sanctions should impose an economic cost on Russia, but they must not harm us more than they harm Russia.”

Both Canada and Germany ended up with egg on their faces once Gazprom decided not to accept the first turbine. But the spin they have put on this debacle is that they actually outmaneuvered Russian dictator Vladimir Putin. Both Canada’s Minister of Foreign Affairs Mélanie Joly and Sparwasser told the committee that they succeeded in calling Putin’s bluff.

“We, my government and the Canadian government… believe that we called Putin’s bluff by actually honouring the part of the turbine delivery. We’ve called the bluff because it is now very clear to see that Russia has not been asking for the turbines in good faith and in order to restore the provision of gas. It has done it in order to blame us with our own sanctions for the fact that Europe will not receive any gas,” said Sparwasser.

According to her, had the turbine not been delivered, it would have played right into Putin’s disinformation campaign by telling European Union members no gas was delivered because Canada would not send back the turbines.

But Putin didn’t simply refuse to take the turbines. In its August 3 announcement, Gazprom stated that it needed documentation to confirm the equipment was not subject to sanctions. That really amounts to upping the ante by demanding Western nations repeal the sanctions altogether.

Why should Canada and Germany allow themselves to be manipulated in such a manner? It is not Putin’s bluff we are dealing with here, but Putin’s blackmail.

What is especially dangerous here is that in removing the sanctions preventing the release of the turbines, not only is Canada setting a precedent for other countries to withdraw from existing sanctions, but we are destroying our own credibility on the international stage. Canada is not an economic or military powerhouse that can use that kind of clout to influence other states. It’s historically been a “middle power” and more importantly an “honest broker” which relies upon its moral reputation to influence events. It now needs to rebuild that reputation.

“At the same time, the latest Canadian-German agreement and the decision announced on its basis is the adjustment of the sanctions regime to the whims of Russia. This dangerous precedent violates international solidarity, goes against the principle of the rule of law and will have only one consequence: it will strengthen Moscow’s sense of impunity.”

She went on to cite several alternatives to Gazprom deliveries.

“We call on the Canadian government to reconsider this decision and ensure the integrity of the sanctions regime. “There can be no exceptions when it comes to holding Russia accountable for tens of thousands of murdered Ukrainians, hundreds of thousands of destroyed infrastructure objects, millions of internally displaced persons and refugees, and an undisguised attack on democracy and the rule of law around the world.”

Bearing in mind Gazprom’s decision not to accept the turbine that already has been delivered to Germany, that makes the transfer of the other five totally unnecessary. The first turbine is gone. That can be considered water over the pipeline so to speak. But any further deliveries will only serve to undermine Western unity and feed Putin’s war machine.