UCC calls for revocation of Siemens turbines transfer to Gazprom 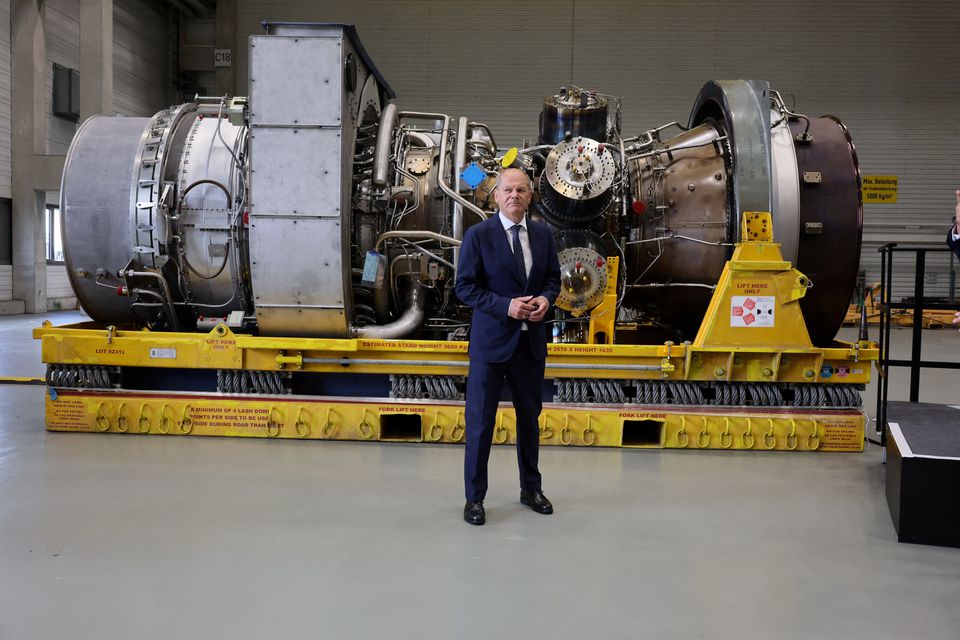 German Chancellor OIaf Scholz stands next to a gas turbine meant to be transported to the compressor station of the Nord Stream 1 gas pipeline in Russia during his visit to Siemens Energy’s site in Muelheim an der Ruhr, Germany, August 3, 2022. Photo: REUTERS/Wolfgang Rattay

The Ukrainian Canadian Congress has asked the Government of Canada to revoke the permit issued to allow for the transfer of six Siemens turbines to Gazprom to allow for greater flow of gas to Germany and the EU.

One such turbine has already been delivered to Germany, but Gazprom refused to accept it stating its wants documentation to prove all sanctions on it have been removed.

The other five remain in Canada.

“The UCC asks that you do the following: call on the government of Canada to revoke the permit that allows for the ongoing servicing of the turbines that enable Russia’s terrorist war machine to function, namely the Nord Stream 1 pipeline, and restore full sanctions against Gazprom.

“Why do we suggest that? Because it is absolutely clear that Russia has contrived the Nord Stream 1 incident to test the resolve of Germany, Canada and our allies. Thus far, we have failed that test, UCC National President Alexandra Chyczij told Parliament’s Standing Committee on Foreign Affairs and International Development (FAID), August 4.

“As you know, the UCC opposed and continues to oppose the waiver of sanctions on Gazprom, and indeed the waiver of any sanctions as they relate to Russia and its genocidal war in Ukraine.

“It has been the longstanding position of the UCC that seeking accommodation or trying to placate Russia has only the effect of emboldening the Russian regime. The Russian regime responds only to strength.

“The rectitude of this position – which is axiomatic when dealing with a ruthless totalitarianism – has been borne out by events in the past, by Russia’s war against Ukraine in the present, and will be borne out in future as well.

“There is no reasonable justification for the continuation of the waiver of the sanctions on Gazprom and there was none when the decision was taken,” she added.

Chyczij was questioned on several matters including whether Canada should increase its military and humanitarian aid, make the sanctions process more transparent, to which she answered affirmatively.

Conservative James Bezan said it was unfortunate that Chyczij had only been invited to speak for half an hour and moved that she be invited for another hour at a later date.

He was cut off at the pass by Liberal Rachel Bendayan who said by making the motion he was actually cutting into Chyczyj’s time and moved adjournment of the motion. Her motion was passed 6-4 with five Liberals and one Bloc Quebecois voting in favor, three Conservatives and NDP-er Heather MacPherson opposed.

“Our position from the beginning is that the decision to provide the permit for Siemens turbines was a very dangerous precedent, that violates international solidarity, goes against the principle of the rule of law. And in fact, the waiver has already strengthened Moscow’s sense of impunity,” said Kovaliv.

“We repeat what was stated by us before: it’s clear that Russia’s demand for turbines had no technical basis and was aimed only at putting even more pressure. The more you concede, the more emboldened Kremlin feels in pushing for further exceptions. Simply put, it’s a slippery slope.

“I would like to remind you of the key facts:

“First, Russia is able to continue full gas supply gas to Germany without the turbine that was shipped from Canada. This turbine is still in Germany and Gazprom announced that it will not accept it.

“Secondly, Ukraine offered to use our gas transit capacity, 40% larger than NS1. We can fully substitute Nord Stream 1. Ukrainian route has traditionally supplied the main volumes of gas for Germany, Italy, Austria and other countries of the region. It is the only pipeline delivering gas from Russia to Europe, with no Russian stake. It is fully reliable and delivers gas to Europe even during the war.

“Delivery through Ukrainian route would also provide additional security for over 11 million Ukrainian households, who are getting gas through our transmission system.”

Joly said ahead of Canada making the decision, both she and Natural Resources Minister Jonathan Wilkinson discussed the matter with Germany and Ukraine and “knowing that turbines were being repaired in Canada, the German Chancellor reached out to us directly pleading for us to call Putin’s bluff.”

Opposition MPs were sceptical of this claim and queried why the idea of calling “Putin’s bluff” has only recently surfaced and why Canada didn’t consider that Russia would continue to use energy as a weapon regardless of what happened with the turbines.

“This whole decision was based on the idea that there is any trust, any belief that Putin would in fact continue to provide gas to Germany… He lies. We know Putin lies… Why call the bluff as you say, when realistically, he’s already told us, he’s already told the world what he intends?” asked NDP MP and foreign affairs critic Heather McPherson. “We already knew the bluff was there. So now what we’ve done is we’ve weakened our sanctions regime, we’ve weakened Canada’s standing with Ukraine, and yet we haven’t actually helped get gas to Germany.”

Bezan told the committee that Canada had been “outmanoeuvred by the Russian Federation.”

He said it seemed that Putin was playing chess while Canada was playing checkers and accused the Liberal government of “enabling” Gazprom, which would give Russia more funds to buy weapons to kill Ukrainians.

“It’s embarrassing that the government of Canada capitulated,” he said.

The report, which was published by the Globe and Mail on August 2, cited three sources who alleged that Global Affairs Canada received intelligence confirming Russia’s intention to wage war against Ukraine — and that Ukrainian staff at Western embassies were among those on likely Russian hit lists.

Despite that warning, the Globe report said Canadian embassy staff in the Ukrainian capital of Kyiv were told to keep that information from Ukrainian staff, who were not among those pulled out of the region when Canada moved diplomatic staff to neighbouring Poland ahead of the invasion.

Conservative MP Garnett Genuis accused Joly of issuing a “qualified denial” of the report, asking her to definitively share whether she believes the reporting to be correct.

“Their story was that Canadian embassy staff were likely on lists, and that the Five Eyes briefed Canadian officials that Ukrainians who work for Western embassies were likely on the list, and further that the Canadian embassy made a decision not to pass that information along. So, Minister, to be very clear, is the Globe and Mail story in your view, correct or not?”

Joly responded, but did not specify whether she believes the Globe and Mail story was correct.

Genuis repeated his question, pressing Joly on whether the Five Eyes — an intelligence alliance that includes Australia, Canada, New Zealand, the U.K., and the U.S. — provided a briefing to the Canadian embassy suggesting Ukrainian nationals working at Western embassies were “likely on the list,” as the Globe and Mail had reported.

“There were some lists specifically targeting … Ukrainian people in Ukraine, and of course, we were preoccupied with (this) targeting,” Joly replied.

This response sparked a back and forth between the two, which saw Joly and Genuis talking over one another for roughly 40 seconds straight, before the committee’s chair intervened.

The brief respite didn’t last long. Genuis began questioning Joly about whether Ukraine is Canada’s ally — to which she replied “of course.”

Unsatisfied with her response, Genuis repeated the question as Joly continued to speak.

“Is Ukraine part of the alliance, Minister?” he asked.

“You want me, Garnett, to answer your question or you want to cut me off every time, every single time?” Joly fired back.

“Ukraine is an ally,” she added, before the clock ran out on Genuis’ turn to ask questions.