They say that growing up is discovering one’s identity. For artist Peter Shostak, that identity became the inspiration for a lifetime of work.

“When an artist is working, you need to zero in on something… You have to have your own voice, your own niche separating you from everything else,” he explains.

Growing up as the son of Ukrainian pioneers on a Western Canadian Prairie farm, he decided to transfer that experience onto canvas.

In 1973 Shostak set about photographing Ukrainian pioneer homes in Smoky Lake County in the heartland of the Ukrainian Settlement Bloc of East Central Alberta to use as backdrops for his paintings. He stayed with that for a number of years then branched out to Western Canadian activities that were common to all ethnic groups, especially children’s winter games.

Later this was to result in several publications containing illustrations of the paintings he had done — When Nights Were Long, Saturday Came But Once a Week and Hockey Under Winter Skies.

Shostak’s most ambitious project, to which he devoted five years of painting, was completed in 1991 with the unveiling of his series For Our Children. These 50 large oil paintings, that portray early pioneer settlement in Western Canada (based on Ukrainian pioneer experiences), have been exhibited across Canada. All 50 paintings, along with background stories gleaned from Shostak’s many years of research, are reproduced in the coffee table book For Our Children. In the introduction to this book, W.D. Valgardson states, “In his life and his art, Peter Shostak depicts what it means to be Canadian. He honours the memory of all our past lives.” 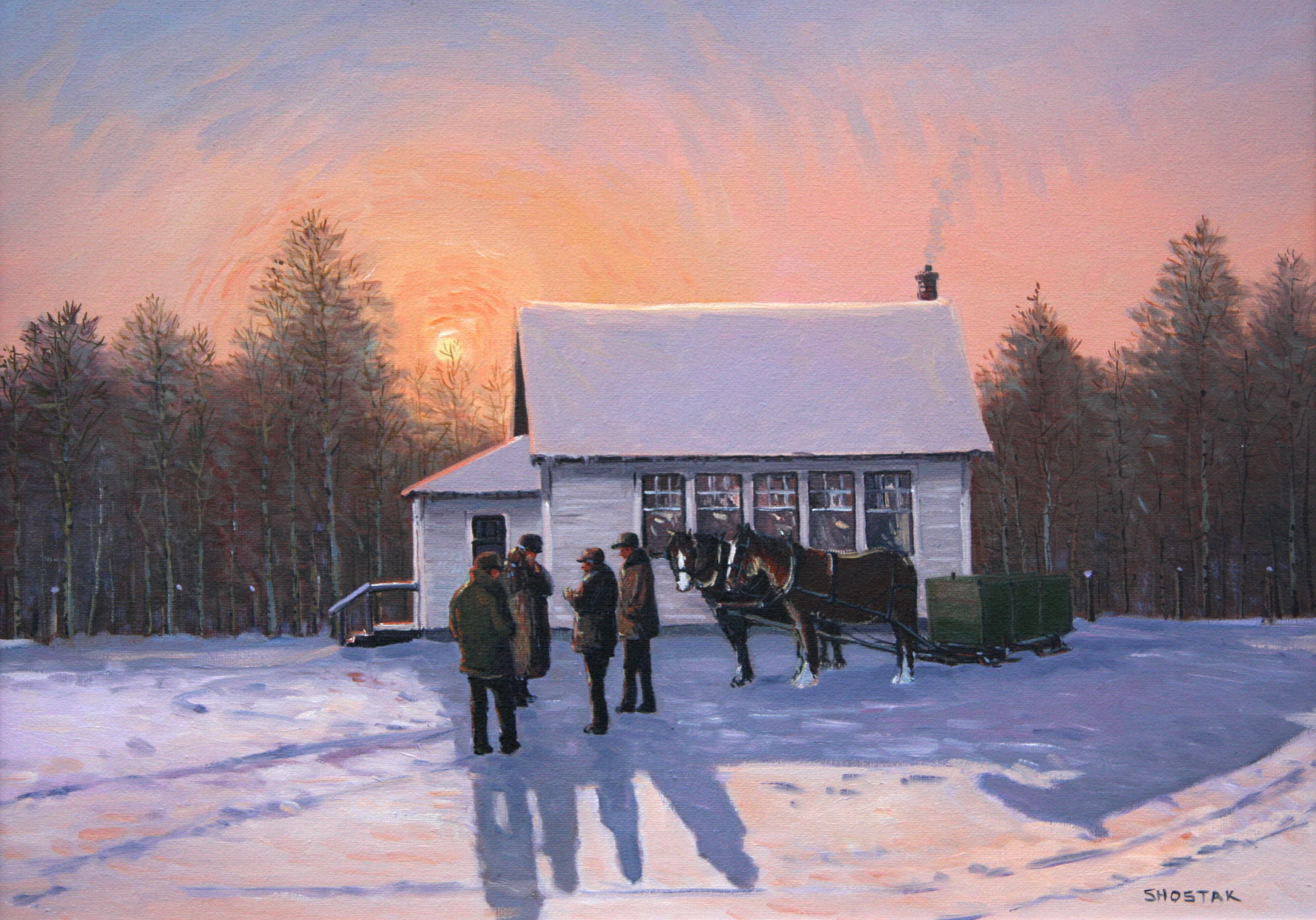 I am going to town tomorrow

Peter Shostak was born and raised on a farm near Bonnyville, Alberta. His early interest in art inspired him to major in art at the University of Alberta. In 1969, he obtained a graduate degree in Art Education and then took a teaching position at the University of Victoria. He remained there as Associate Professor of Art Education until 1979, when he decided to leave teaching and pursue a career as an artist, devoting all of his time to painting and silkscreen printing.

For this he credits Mykhailo and Yaroslava Szafraniuk, founders of the Ukrainian Canadian Art Foundation, who gave him his big break.

““They were very important in giving me the confidence to leave my full-time job at the University… They were very critical in hosting several exhibitions in their gallery… M. Szafraniuk was a very good salesman… He was very persuasive and as a result a lot of people bought my paintings. That gave me reinforcement and certainly, in 1979, when I decided to leave the university, I was quite confident so I could make it as an artist,” he says. 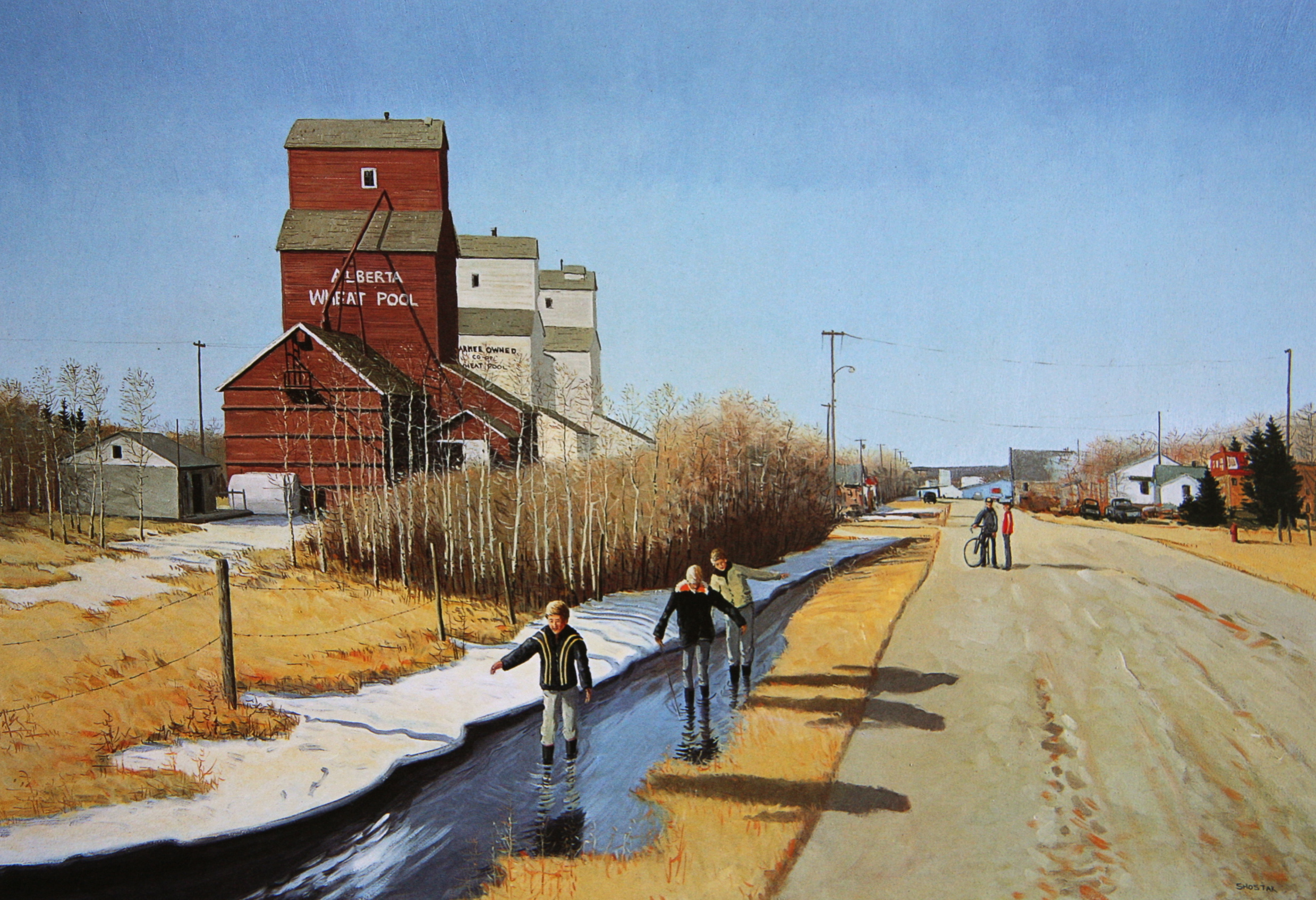 My boots are high enough

But the one person who has been the most important in his development as an artist has been his wife Geraldine, who has taken over as business manager.

“I wouldn’t have succeeded to the extent that I have without her. She does the business, she runs the office, she does my editing. She’s my first critic,” says Shostak.

Due to his subject matter, the comparison with William Kuerelek is often drawn.

“It’s valid in that we both lived on the prairies and used the prairie landscape as a backdrop to our paintings,” Shostak notes.

But the styles are totally different in that instead of painting a detail, Kurelek would scratch the paint out with a knife and could finish two paintings in one day.

Shostak, on the other hand, takes three to four days to finish one painting as he paints in layers and oil paints take time to dry. Thus, he may be working on several paintings at one time. 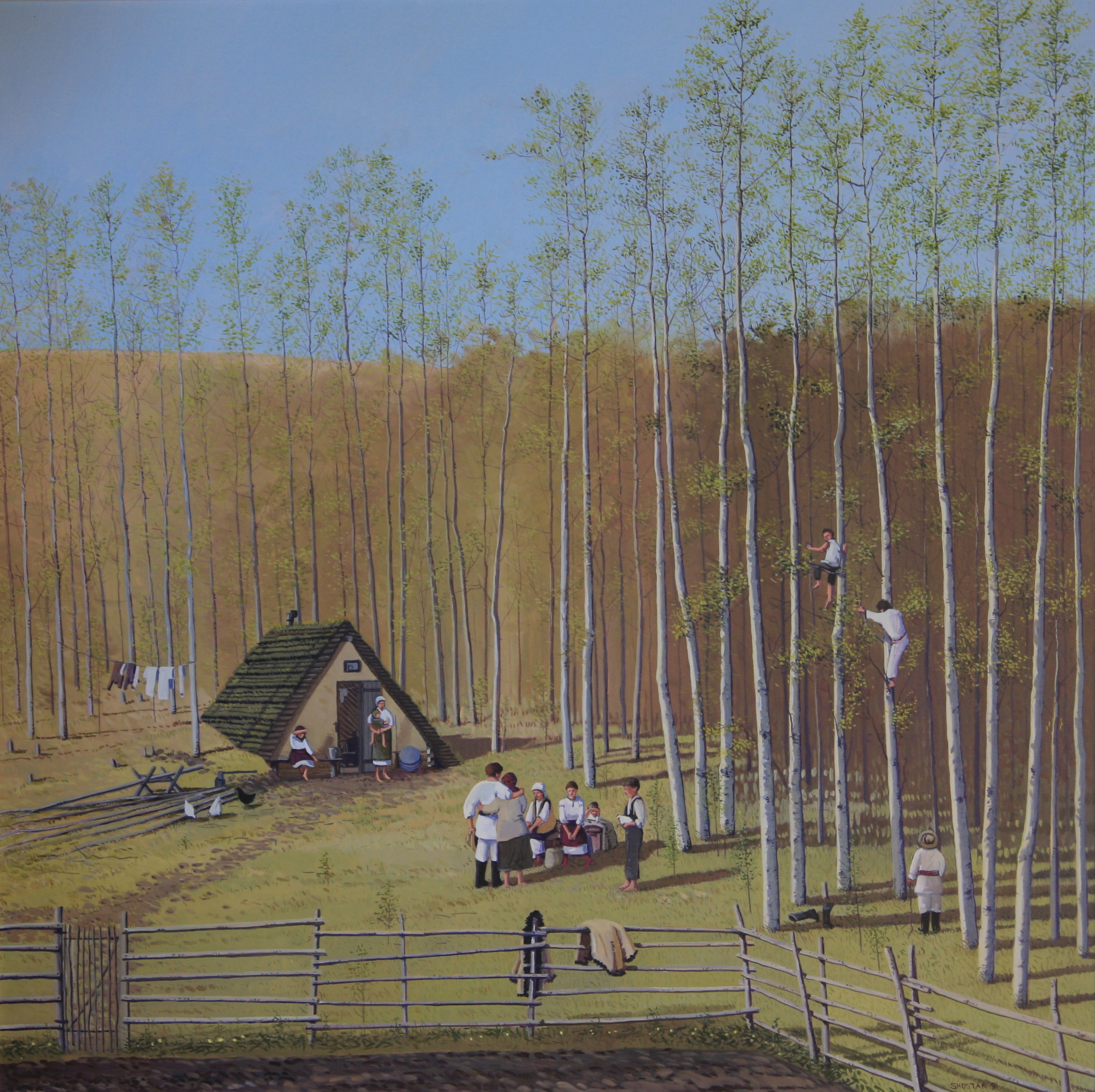 Don’t cry, here we are free and will soon prosper
{This painting is part of the For Our Children series}

One distinguishing mark of Shostak’s work is the blue shade he uses to paint the Prairie night sky.

“I have my secret formular and it doesn’t take me long to create the colours that I need. So yes, that is referred to as the Shostak Blue,” he explains.

In 2003, Peter Shostak received the Queen’s Golden Jubilee Medal in recognition of his outstanding exemplary contribution to Canada. He also is the recipient of the Taras Shevchenko Medal, the highest honour awarded by the Ukrainian Canadian Congress. The Medal recognizes exceptional achievement in culture and the arts and is measured by the recipient’s level of excellence and initiative, body of work, peer recognition and the impact both within and outside the Ukrainian Canadian community. Other awards include Western Showcase at the Calgary Stampede, an annual juried world class exhibition, “Best New Artist” – flat work and Western Art Auction “Best New Artist” – flat work.

Most major cities in Canada have repeatedly hosted exhibitions of his work over the past several years and he has completed many commissioned paintings and serigraphs for individuals, organizations and major corporations.

After living in Victoria for many years, he now lives in Courtenay, BC. Shostak frequently returns to his native Alberta to photograph and refresh his mental images of prairie life and the landscape.

Right now, he is looking for a place to exhibit his works for posterity. Initially Shostak considered the planned new Ukrainian Canadian Archives and Museum of Alberta (UCAMA) building as a possible home, but that fell through with the project itself.

Asked whether major Canadian galleries like the Art Gallery of Alberta or Ontario could be possibilities, Shostak replies that is a possibility, but someone has to lead the way.