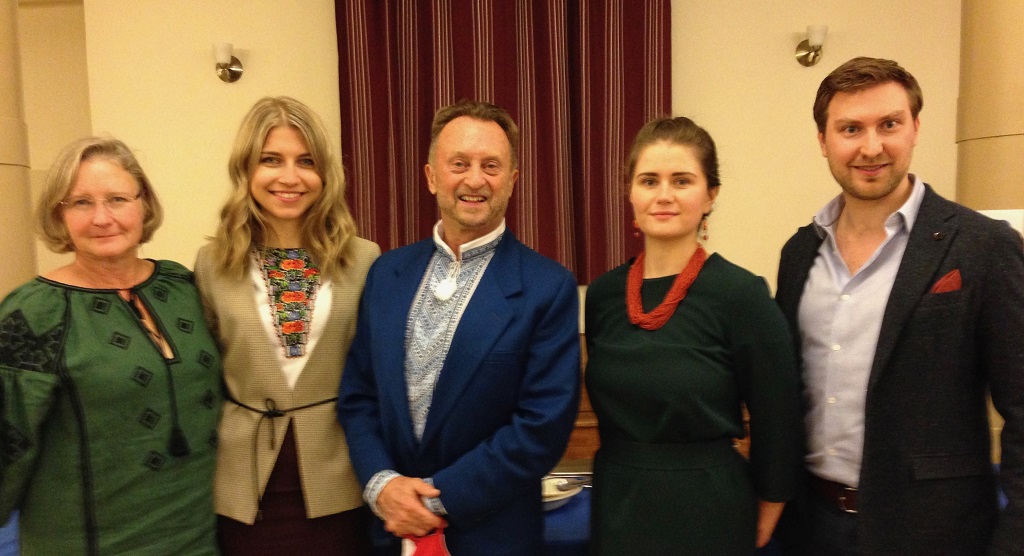 To mark the 30th anniversary of Ukraine’s renewed independence, the Cultural Committee of UNF-Montreal branch held a celebratory concert of classical music and jazz on October 17, 2021 at UNF-Montreal hall. Members of the Ukrainian community and Montreal public attended.

To begin, an original rendition of “Shche ne Vmerla Ukrajina” was performed by pianist Serhiy Salov, and trumpetist Paul Merkelo of the Orchestre Symphonique de Montréal, in an unforgettable performance of the Ukrainian national hymn.

The concert was officially opened by Katrusia Smolynec, president of Ukrainian National Federation – Montreal branch who welcomed the guests, gave brief comments about the historic building, including an overview of activities of the UNF-Montreal branch. Ms. Smolynec thanked the Cultural Committee headed by Dr. Nadia Demko for her lead in organizing the event, as well as members of the cultural committee, particularly Taras Kulish, for his lead in organizing the classical music portion.

In attendance was special guest Mr. Evhen Czolij, Honorary Consul of Ukraine in Montreal who addressed the audience. His comments also reflected on the ongoing war in eastern Ukraine, and Ukraine’s efforts to end Russia’s invasion.

The first half of the concert featured Ukrainian-Canadian soprano Natalya Gennadi and renowned international pianist Serhiy Salov. The program included arias from Ukrainian operettas, songs by M. Skoryk and S. Liudkevych as well as piano works by M. Lysenko, and I. Shamo.

Soprano Natalya Gennadi, born in Ukraine, is now living in Toronto. She is establishing her operatic career in North America in a wide range of repertoire. Pianist Serhiy Salov resides in Montreal and has performed with orchestras worldwide such as London’s Philharmonic Orchestra, Berlin Symphony, Tokyo Symphony, Orchestre classique de Montréal, to mention a few.

Performance by UNF’s Marunczak Dance Ensemble, bridged the concert into the second half which featured jazz music presented by The Bogdan Gumenyuk Jazz Quartet. Bohdan won a Fulbright scholarship, which brought him to Philadelphia where he received a Master’s Degree in Jazz Performance in 2013. Members of the jazz quartet include saxophonist Bohdan Humenyuk, percussionist Jim Doxas, bassist Adrian Vedady and pianist Paul Shrofel.

Standing ovations were given throughout the concert.

Following the concert, there was a small reception in the downstairs hall. Additional remarks were presented by newly elected National UNF President Jurij Klufas of Toronto. Also present from Toronto was Uliana Hlynchak of Kontakt-TV. Jurij Klufas was followed by Mykhailo Shwec. president of the Ukrainian Canadian Congress, Montreal branch/Quebec Provincial Council together with Zorianna Hrycenko-Luhova: “What better way for the Montreal community to celebrate the renewal of Ukraine’s Independence, but with a program of classical music and modern jazz. Ukraine has a rich history of world-renowned music, composers, musicians – Bortniansky, Stravinsky, Lysenko, Oleksander Koshetz as does our diaspora. In Montreal, performers and composers such as pianists Luba and Ireneus Zuk (present with us today), George Fiala, Bohdan Veselovsky, Nestor Horodovenko with his renowned choir here at YHO-Montreal, and many more. These cultural ambassadors in music bring public and international attention to Ukraine’s history, its achievements and its struggle for Independence. They are a reflection of Ukraine’s centuries-old unique music-legacy to world culture and going strong. …”

The in-person attendance at the live-concert was allowed according to Quebec Health regulations, with presentation of the covid vaccine passport, a valid identification at the entrance, distancing rules, and mandatory mask wearing.

The event was filmed and excerpts shown on Kontakt Ukrainian Television Network.