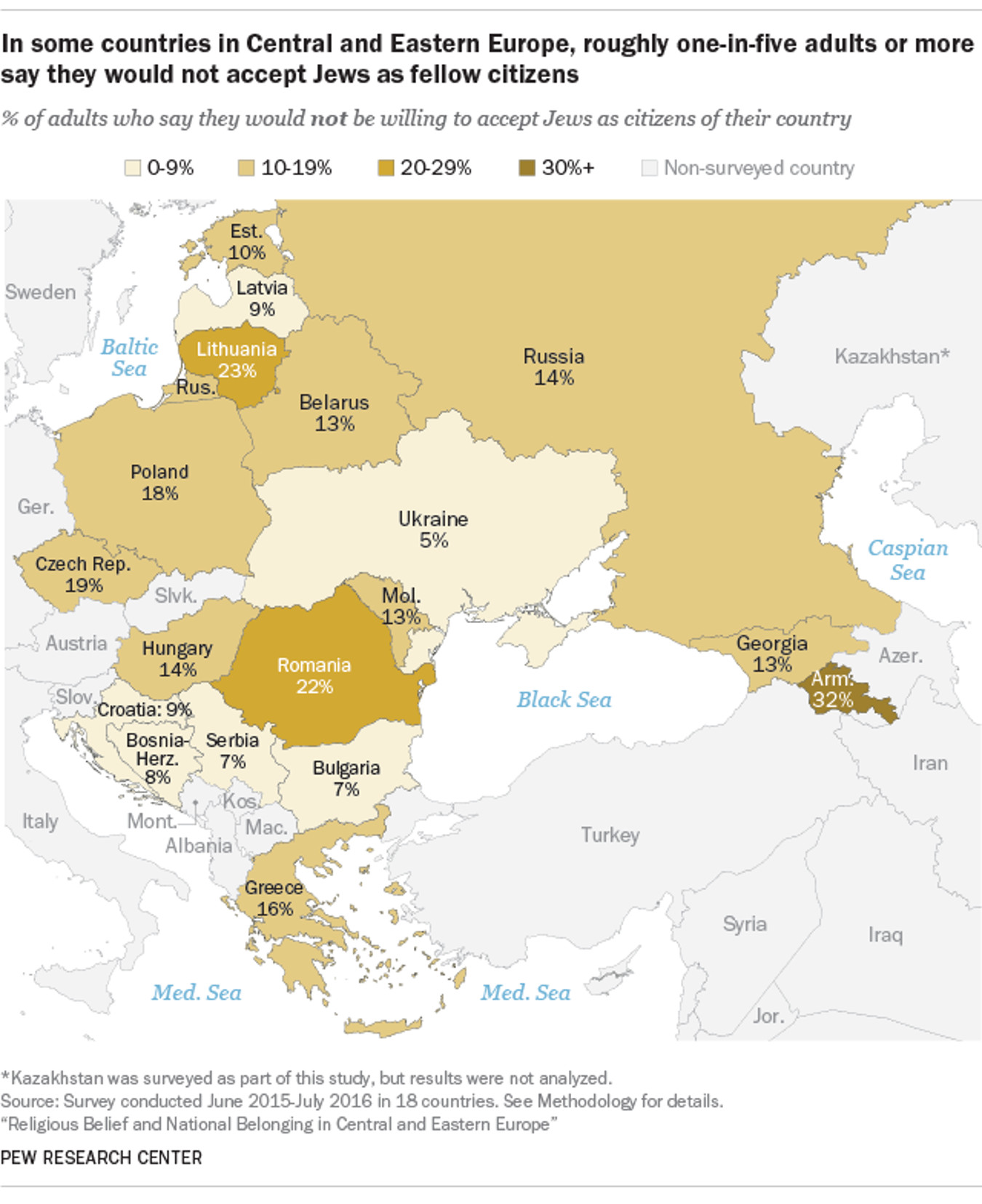 In a recent survey by the Pew Research Center, residents in 18 East European countries were asked whether they would NOT accept Jews as fellow citizens. Roughly one in five said yes, but it varied from country to country. The results were quite surprising. The highest percentage was recorded in Armenia with 32% saying they would not. Next were Lithuania with 23% and Romania with 22%. Countries in the mid range included the Czech Republic (19%), Poland (18%), Russia and Hungary both with 14% and Belarus with 13%. The country that was most tolerant was Ukraine, with only 5% saying they would NOT accept Jews as fellow citizens.

While this may be surprising considering Ukrainians have often been historically vilified as virulent anti-Semites in various historical accounts, it is not that surprising when one carefully and objectively examines many of the historical myths regarding supposed Ukrainian anti-Semitism. Let’s focus on just some of these.

First, the 1648-1657 uprising of Hetman Bohdan Khmelnytsky, which led to the establishment of the Kozak Hetmanate, considered by Jewish historians to be one of the greatest traumas of their history. While massacres did occur, the numbers have been greatly exaggerated and the types of atrocities claimed are questionable. Early 20th-century estimates of Jewish deaths were based on the accounts of the Jewish chroniclers of the time, and tended to be high, ranging from 100,000 to 500,000 or more, but the total Jewish population of Ukraine at that time numbered only 50,000. Ukrainian American historian Jarowlaw Pelenski narrows the number of Jewish deaths to between 6,000 and 14,000. As the late Professor Orest Subtelny stated: “While many of them were killed, Jewish losses did not reach the hair-raising figures that are often associated with the uprising.”

Much of the antagonism directed at the Jews by the Ukrainian peasantry was not so much racial as economic. Polish nobles relied almost exclusively on Jews to collect taxes from the peasants in return for a percentage. As there was very little regulation, many took advantage of their status to exploit the peasantry. While there is no justification for any acts of anti-Semitism or violence targeted at Jews regardless of underlying circumstances, they must nevertheless be studied in historical context and from more than a single perspective.

Next, we come to the Ukrainian War of Independence from 1917 to 1921 and the military leader Symon Petliura, who has been unjustly vilified as a perpetrator of anti-Jewish massacres. This is mostly Russian-Bolshevik propaganda. The Ukrainian People’s Republic (UNR in its Ukrainian acronym) was far more socially progressive in how it treated its Jewish minority than most other European states at the time. It had a special cabinet minister for Jewish Affairs and Yiddish was one of its four official languages (the other three being Ukrainian, Russian and Polish). According to Wikipedia:
“Symon Petliura made attempts to stop the occurrence of pogroms among Ukrainian detachments. When he discovered from the Minister of Jewish affairs of the UNR that the transiting squadron at the Yareska station had initiated violent acts against the Jewish population, he immediately sent a telegram to the military commandant of Myrhorod: ‘I command that the matter be investigated and reported back to me, and to use immediate measures so that similar excesses do not have a place and will be punished’.
“When Petliura took charge of the Directoria in 1919, at his initiative the government investigated the Jewish pogroms in Kamianets-Podilskyi and Proskuriv, demanding that the commanders ‘use decisive actions to totally liquidate the pogromist anti-Jewish actions, and the perpetrators are to be brought before a military tribunal and punished according to the military laws of war’.”

World War II is yet another example of how many historians, many of them Russian, have attempted to tar Ukrainians with the brush of violent anti-Semitism. In particular, Russian propaganda has attempted to vilify the Ukrainian Insurgent Army (UPA in its Ukrainian acronym). According to Moses Fishbein, a leading member of Ukraine’s Jewish community as well as a distinguished Ukrainian poet and translator:
“The claim that the UPA engaged in anti-Jewish actions is a provocation engineered by Moscow… It is a lie that the UPA destroyed Jews. Tell me: how could the UPA have destroyed Jews when Jews were serving members of the UPA? …“In 1942-43 Natalia Shukhevych, the wife of UPA Commander in Chief Roman Shukhevych, hid a young Jewish girl named Ira Reichenberg in her home. General Shukhevych prepared a fake passport for the girl in the name of Iryna Ryzhko. When the Gestapo arrested Mrs. Shukhevych, the little girl was brought to an orphanage based at a convent located in the village of Kulykiv in the Lviv region. There the little girl survived the German occupation and the war.”
What is rarely reported however, is how many Ukrainians actually saved Jews during the Holocaust. Ukraine ranks fourth, behind only Poland, the Netherlands, and France, when it comes to countries whose residents have been honoured with the Righteous Among the Nations award — an honorific used by the State of Israel to recognize non-Jews who risked their lives during the Holocaust to save Jews from extermination by the Nazis. And that does not even include some very notable individuals like Metropolitan Andrei Sheptytsky who saved hundreds of Jewish children in Lviv.

The history of Ukrainian-Jewish relations remains a complex and often disturbing one. We need to have an honest appraisal of events and one which is placed in its proper historical, social and political context. There have been episodes in Ukraine’s history when the country’s Jewish population has been the victim of murderous violence, none graver than during the Holocaust. It is also true that most of these episodes have not been systematic acts of state-sponsored violence directed by a sovereign, independent Ukrainian state against its own Jewish citizens or residents. Rather, such violence as has been inflicted upon Jews in Ukraine has in most cases taken place during times of war or insurrection and has either been instigated and provoked or, at times, directly carried out, by foreign invaders or occupying powers sometimes with the assistance of emotionally inflamed mobs and/or thuggish opportunists of various ethnicities. Ukraine’s history over much of the past 800 years has been one of territorial dismemberment and occupation by foreign powers including in just the last century, Tsarist Russia, Poland, Hungary, Slovakia, Romania, the USSR, Nazi Germany and now Putin’s Russian Federation. To cast Ukrainians as archetypal anti-Semites in such circumstances is historical revisionism of the highest order.
Prior to the Holocaust, the greatest number of state-sanctioned killings of Jews were the pogroms of the Russian Empire.
Since independence in 1991, Ukraine has maintained a remarkable record of respect for the rights and freedoms of all racial and religious minorities, including especially the country’s Jewish population.”

In fact, Ukraine’s Prime Minister, Volodymyr Groysman is himself Jewish. While there are some extremist elements in Ukrainian society, their numbers are miniscule when compared to those in other countries – in particular, the Russian Federation. Acts of anti-Semitism on Ukrainian soil are most often perpetrated by Russian provocateurs. As David Fishman, a professor at the Jewish Theological Seminary and director of Project Judaica, explains: “When we look at what is going on the ground in Eastern Ukraine, we are seeing the revival of the language of Russian imperial ideology from 100 years ago, which is both very nationalistic and very anti-Semitic, as well as anti-Ukrainian.”

Better still, let’s quote Yaakov Dov Bleich, an American-born rabbi recognized as Chief Rabbi of Ukraine since 1990: “All of the recent attacks on synagogues and Jews have taken place in the east where the Russian extremists are operating. Meanwhile, in the West, where there are supposedly ultra-nationalist extremists, all has been quiet. The Ukrainian Jewish Community is definitely more afraid of Putin and these pro-Russian hooligans than of Ukrainian anti-Semitism.”

And, as the Pew Research Center survey clearly shows, the myth of Ukrainian anti-Semitism has no place in the 21st century.