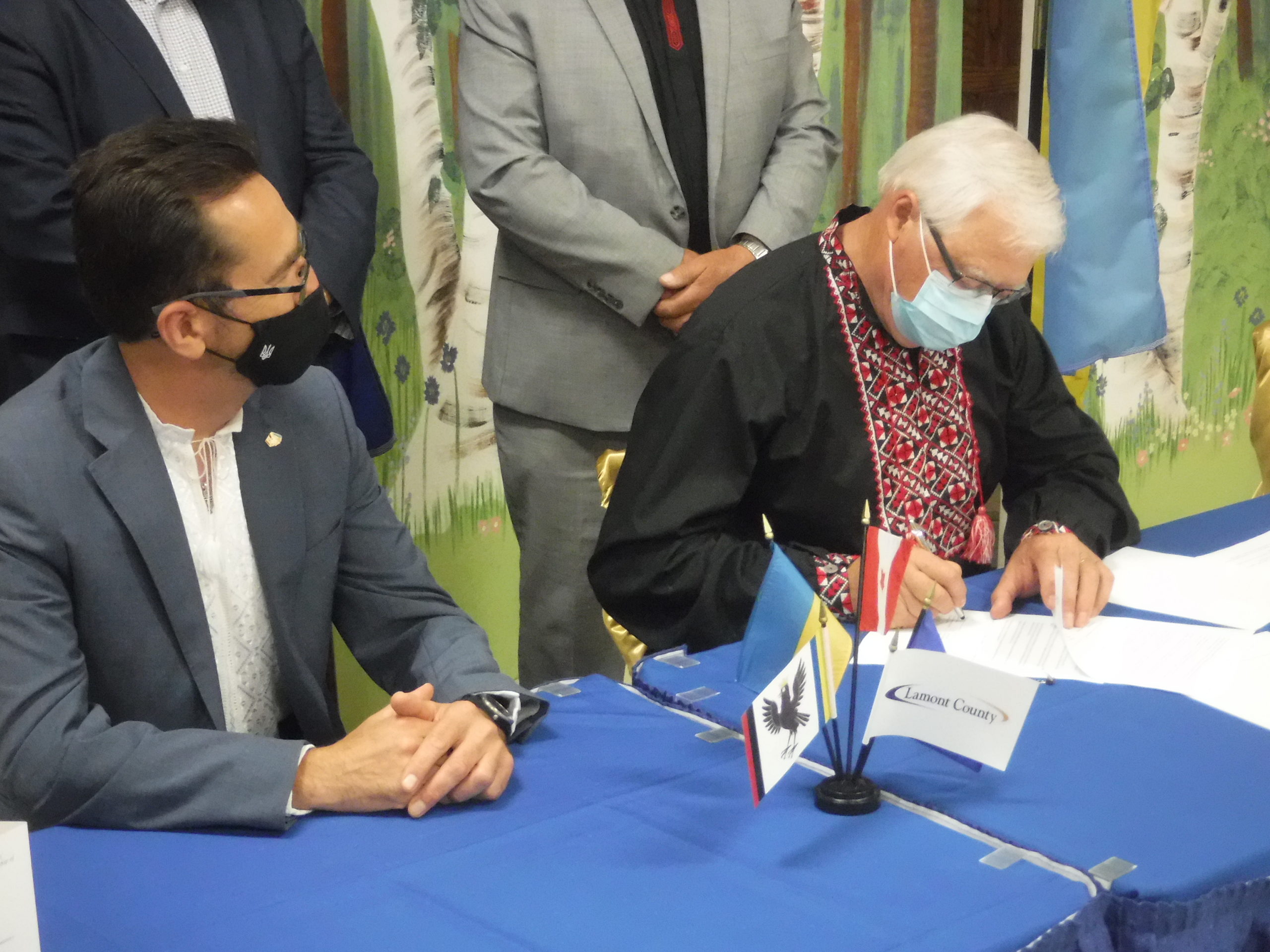 In an historic ceremony September 7, Alberta’s Lamont County Reeve David Diduck signed a Memorandum of Understanding on Cooperation (MOUC) with the head of the Perehinske United Territorial Community Council in Ukraine’s Ivano-Frankivsk Oblast, affirming the 130-year bond between the two regions.

The Perehinske United Territorial Community Council contains the village of Nebyliv from which the first two Ukrainians to settle in Canada, Wasyl Eleniak and Ivan Pylypow came from. Lamont County contains the Edna-Star colony in which they eventually settled.

The MOUC will allow the parties to work together cooperatively in a variety of sectors that could include Agriculture, Archival and historical cooperation, Arts and Culture, Economic cooperation, Education, Family networks, Governance, Health care, Humanitarian assistance, religious organizations, Youth, Sports, and recreation.

“Lamont County looks forward to facilitating contacts with Perehinske Community Village Council in order that specific projects can be identified and developed for the betterment of both parties,” said Reeve Diduck.

“By signing the twinning agreement, the Perehinske United Territorial Community Council and Lamont County will ensure the historical relationship between the two communities is remembered, traditions and cultures are maintained, and ideas and possibilities are explored by both parties for the mutual benefit of their citizens and future generations,” he added.

The ceremony was a virtual one in which both parties were connected live via Facebook.
Several speakers in Lamont addressed the significance of this event.

Representing the Government of Ukraine, Edmonton Consul-General Oleksandr Danyleiko said the signing was very symbolic as it restores “the historical ties between Ukraine and Alberta, between Ukrainian and Canadian regions.”

“My own great grandparents Stephen and Maria Motiuk and Stephen and Barbara Sawchuk, who immigrated in 1899, settling in Mundare… were, together with others, instrumental in establishing the Ukrainian Catholic Church, of which the majority of immigrants were members.

“May God bless the memory of our early immigrants, as well as their descendants. And may the twinning initiative… be a constant reminder of sacrifice and blessings which bind our two countries,” he noted.

MC Radomir Bilash read out greetings from both Alberta Premier Jason Kenney and Health Minister Tyler Shandro, who is a descendant of the first Ukrainian to be elected to the Alberta Legislature, Andrew Shandro.

“Our province and country would not be what they are today without the contributions of Ukrainian Canadians,” said Kenney.

“The heritage that was carried here by early settlers nurtured successive generations of industrious and innovative people who helped build one of the most prosperous and generous societies in the world. It is exciting to see the development of this new bond of friendship between the ‘Cradle of Ukrainian Settlement in Canada’ and the place where the journey began for so many of those who came to Alberta in search of opportunity,” he added.

“When my ancestors left Bukovina at the turn of the 19th century, they, like many Ukrainian immigrants, came to Canada for new opportunities for themselves and their families…Their pioneering spirit, and that of so many others, was the foundation for Alberta’s growth as a province for the last hundred years. I have no doubt it will be the foundation of its growth for the next hundred,” noted Shandro.

Local MLA Jackie Armstrong-Homeniuk (Fort Saskatchewan – Vegreville) also recalled her own pioneer roots and added that: “These two beautiful regions recognize their shared commitment for improving and sustaining the historic and cultural connections, between Ukraine and Alberta.”

“Perehinske and Lamont County enter this Memorandum of Understanding on Cooperation to work together to support and facilitate opportunities for collaboration in the private sector and areas of Education, culture, economics, and social initiatives.”

Edmonton Beverly-Clareview MLA sent video greeting in which he congratulated the two jurisdictions for signing the MOUC.

“The commonality throughout all their stories is the tremendous courage they showed by taking a great risk in hopes for a fresh start and new opportunities, and were rewarded with a tough, yet immensely prosperous life in their new country of Canada.”

Representing the Alberta Provincial Council of the UCC, its President Orysia Boychuk said that the two trailblazers, Eleniak and Pylypow “set the path for all waves of immigration which continue on until today.”

“Perseverance, resilience and sheer tenacity is in our genes, as Ukrainians have survived and overcame centuries of persecution and adversity, only to rise on top. Today, over 365,000 Albertans with Canadian Citizenship identify themselves as having Ukrainian roots. Our Ukrainian community in this province remains a strong, vibrant, and contributing force in this diverse multicultural fabric of Canada,” she added.

MC Bilash read out a greeting from Wasyl Eleniak’s grandson Steve Eleniak who noted that his ancestor “had no idea of the impact that he and his fellow villager, Ivan, would have on this country, and on what is now Ukraine.”

“After 130 years, the Ukrainians are no longer immigrants in Canada. We are a part of Canada and will continue to help develop this country for generations to come. But we haven’t forgotten our family in Nebyliv, and look forward to meeting them in person again, and soon.

“Thirty years ago, I published a book of the family tree of the Eleniak family in Canada. It is long out of print. Today, I am passing this book on to the County of Lamont, so that others across the world will be able to see what happened to Vasyl’s family after he came to live in Canada.… In the meantime, a digital copy of my book is now located on the Lamont County website for the world to see,” he added.

Representing the youngest generation of the Pylypow family, Ivan’s great-great-great-grandson, Marco Lytwiak noted that his family always stressed the importance of knowing your roots.

“From their stories of resilience, we have been pushed to try and retain as much as we can of our heritage… The values my family instilled in me. Ones that I see as the commonality of our people and our communities continue to push me and others in my generation in our lives and towards our future.”

Kevin Baron, President, Ukrainian Pioneers Association of Alberta stated: ”Firstly we thank the Nehiyaw and Michif peoples whose ancestors cared for the lands that make up Lamont County for generations before the arrival of the Ukrainian settlers, and who welcomed and helped the newcomers despite their own struggles. We thank you and also acknowledge that we have work to do to renew those positive early relationships. Hiy hiy! Maarsii!”

Referring to the Ukrainian immigrant settlers, he added: “Their risk-taking and hard work produced the thriving communities we have today in Lamont County and elsewhere. It was early settlers themselves who founded the Ukrainian Pioneers Association of Alberta in 1941, 80 years ago, and we strive to continue to honour their history and legacy today.”

“My great grandfather, George Gordey and my great grandmother, Magdalena, left Borovsti, Ukraine – not that far from Nebyliv – and arrived in Canada on June 2, 1900.
“They settled right here in Lamont County. Who knows, they might have even met some of those first families that came with Eleniak and Pylypow.

“It is my privilege to honour my great grandparent’s memory, and all the waves of Ukrainian immigration, through the Vision of the Ukrainian Canadian Foundation of Taras Shevchenko.”