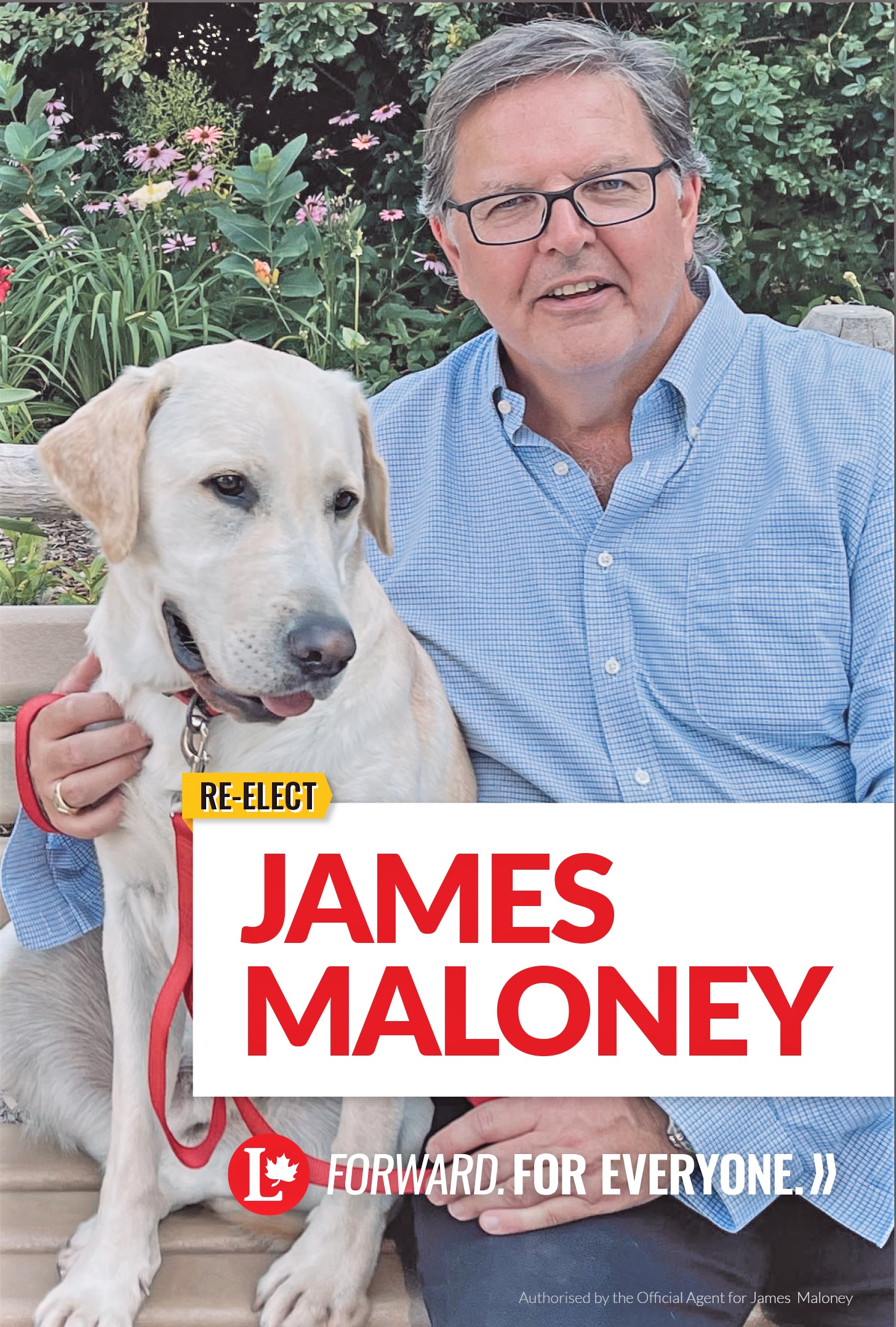 James Maloney served two terms in Parliament as MP from Etobicoke—Lakeshore (Ontario), the riding which hosts a sizeable Ukrainian ethnic group (over 3% of the total population) as well as headquarters and offices of numerous Ukrainian Canadian organizations including Ukrainian National Federation of Canada, League of Ukrainian Canadians, Ukrainian World Congress and Ukrainian Canadian Congress. Maloney is now running as a Liberal candidate in the same riding.

NP-UN: Let’s start with a few questions about the election campaign. First, on the Leaders’ Debates. Who do you think won the English-language debate?

James Maloney: I watched the news and everybody is asking that question, and you get a different answer from everybody. It was an interesting format. I’ve never seen a debate quite like that before – it was rolling out different people from different networks asking questions, so it was more of a question and answer session than a debate. I think the prime minister did an excellent job and showcased some of the important things we are running on this campaign.

NP-UN: You mentioned the format – at times, the debate was quite hectic and heated. Why do you think that debate and maybe this whole campaign at the moment is so heated?

James Maloney: I don’t know if the debate was heated because the host and the people asking the questions were getting into the mix quite a bit. The campaign is intense because there are many very important issues that we’re facing and that are being discussed. We’re just coming on the heels of 18 months of living through this pandemic. We’re not through it yet, and there’s a lot of critical issues facing the whole country, like making sure the economy continues to rebound, which it is, thanks to so many of the supports that were put in place.

The example I am particularly proud of in Etobicoke-Lakeshore is that we have over 4,000 small businesses. Without the support in the form of wage and rent subsidies, 30% to 40% of them would have gone bankrupt. But instead, they are able to keep going. We’ve already recovered nearly a million jobs nationally since the start of the pandemic. On the vaccines, our perspective is very clear: we believe they should be mandatory where appropriate and people should be encouraged to be vaccinated.

NP-UN: How are you planning to encourage people to get vaccinated?

James Maloney: We are making vaccinations mandatory for air and train travel and in federally regulated businesses at the federal level. In the parts of our economy controlled by the federal government, positive steps are being taken. Others are doing it too. John Tory, the Mayor of Toronto, made it mandatory for all City of Toronto employees. The province of Ontario is introducing vaccine passports shortly; that’s an encouraging sign as well. We’ve shown willingness to work with all the provinces and municipalities to help them take whatever steps they need to make sure people understand that vaccines are safe and the right way to move forward. The Prime Minister announced ten days ago that we’re willing to help the provinces financially to implement these programs.

NP-UN: Is the number of vaccinated people going up as a result of these measures?

James Maloney: Yes, absolutely. Every time a step is taken by any government level mandating or encouraging vaccinations, you see an immediate return. In Ontario, for example, the number of people registered to get vaccines has gone up just in the last few weeks. I’ve seen it first-hand; there was a vaccine clinic at the Islington subway station where I dropped by two mornings ago where many people were getting vaccinated on their way to and from work.

NP-UN: With the high rate of vaccinations in mind, do you think we can avoid further lockdowns, at least in Ontario?

James Maloney: That’s certainly the goal right now because nobody wants to see all of these small businesses locked down again. Just go down the main streets like The Queensway, Lakeshore, Kipling and everywhere in between and look at all of these small businesses. I’ve been working for 18 months, every single day on the phone with our local business owners and employees, trying to help them get through this. We’ve managed to get through it in a very good way so far. So, the more vaccinated people, the better off we are and less likely we are to have further lockdowns.

NP-UN: Have you participated in all-candidates debates in Etobicoke-Lakeshore?

James Maloney: Yes, I participated in one at the Daily Bread Food Bank on September 9th and an earlier one last Tuesday, hosted by Eculinks, an organization of local churches. Every election, they hold a debate, and it’s always well attended. I attended that along with the Green candidate and the NDP candidate. The Conservative candidate did not attend. We had a third one on the 10th, which was two hours long and dedicated to the climate change debate. Again, the Conservative candidate did not attend. The fourth will take place on the 16th and is organized by the Long Branch Neighbourhood Association at 8 p.m.

NP-UN: Tell us more about the debates so far. What were the main issues on peoples’ minds?

James Maloney: I think they are going well, great discussions. The main issues are some of the issues we’ve already talked about – COVID recovery, vaccines and health care, economic recovery and Indigenous rights, which played an important role in this debate, and it should. Climate change, of course, is a big issue. But, I mean, all of the issues you’ve seen nationally are the same issues we’re talking about locally.

Keep in mind, we’re doing these in a virtual world, which is different. Usually, these debates take place in person, usually at the Royal York United Church, but they did it on Zoom, and the organizers did a really good job of making the same debate. The Daily Bread Food Bank debate was done partially in person, partially by Zoom. The technology worked and was very effective. The one on Friday on climate change was 100% virtual. I did from my home sitting in front of my computer. While I miss the interaction with the people, the virtual format works as it provides more people with access to the debates because they are available afterwards online.

NP-UN: You mentioned climate change. Weren’t two of the debates focused on that issue, and is it an issue for Etobicoke-Lakeshore?

James Maloney: Yes. It has been an issue in all of the debates, actually. If you turn on the TV right now, there are fires in Western Canada, northern Ontario and other parts of the world, large-scale flooding in Europe. People realize that it doesn’t matter whether you live in a rural or urban area; climate change is very significant. Right here in Etobicoke, we’ve had significant storms recently that have come on suddenly and abruptly, and we’ve had several issues with trees and power outages. Our air quality has been affected by events hundreds of kilometres away. These types of things are happening more frequently and in a much more severe fashion.

We have done more to fight climate change than any other government in Canadian history at the national level. We are committed to achieving our 2030 climate target of reducing emissions by 40% to 45% of 2005 levels – which is in line with where science says we need to go. And we will reach net-zero by 2050.

James Maloney: I was born in Thunder Bay and lived there until 11 years old. I was a practicing lawyer for 20 years before I went into politics. When I was elected in 2015, I asked if I could be on that committee because natural resources drive our economy. It’s been a very worthwhile part of our government. We’ve had some very interesting discussions, including climate change and the response to the natural resources sector. You will see some of those issues we discussed in the platform, so it is valuable work. Canada is in a great position to be at the forefront of climate change solutions that will help the environment and create green jobs.

James Maloney: Together with the other MPs from Toronto, including our Finance Minister, Chrystia Freeland, who is a very strong advocate for the City of Toronto, we’ve accomplished some of the things we’re very proud of. First, we put significant sums of money into transit in Toronto, more so than any federal government has in history. You know that subway map above the doors when you get on the subway or get off the subway? It hasn’t changed significantly in the 45 years I have lived here. And the reason for that is because municipalities need extra funding. We’re making sure that they have it and will be investing in transit. And that’s going to help on a number of fronts: to help people get to and from work, it’s going to help on the environmental side because it means it’s going to take cars off the road.

The other thing we’ve invested heavily in is housing and affordable housing. We’ve invested hundreds of millions of dollars in the city of Toronto, that’s making a significant difference.
As I mentioned, climate change is a very real, very significant fact of the city. And we’ve invested money in infrastructure locally that will help address some of the problems caused by climate change. We invested $11.9 million in the tree canopy along the waterfront. Thanks to the Investment in Green Infrastructure program, we have invested $20 million for Toronto’s Ravine Strategy. We fought hard for that as a 416 caucus. Catherine McKenna, the former Environment Minister, visited the riding here several times in the last several months. As you know, we live on this beautiful waterfront, and we have a number of parks.

I am especially proud that Etobicoke-Lakeshore is home to a vibrant Ukrainian community. Head down to Evans and Islington Avenue area to see that many Ukrainian organizations, both provincial and federal, are located here. Growing up, as I’ve said many times before, Ukrainian Canadians were my neighbours, my friends, my schoolmates, and in Parliament, they are part of our team. I have been part of the Canada-Ukraine Friendship Group to represent that voice in Ottawa. I also work closely with colleagues on these important issues, including Chrystia Freeland. I was pleased she was in the riding last week out knocking on doors with us.

But what else would I like to achieve? I would like to get more transit in our community of Humber Bay Shores. Over 30,000 people live there now. We need more trains. After I got elected, the first thing I did was convene a meeting with the head of Metrolinx, the head of TTC, the councillors, and the provincial Member of Parliament in my constituency office. We sat down and said, “how do we get transit built there?” and now it’s going to happen. There’s going to be a GO Station put on the old Christie land. Those are the types of accomplishments that we have so far, but there’s more work to be done because it’s a growing community, and we have to make sure that it gets the things it needs.

While we have many challenges ahead as a country, I believe that we will find solutions by working together. Thank you for this opportunity to chat with you.