How long will we tolerate Russia’s horrific atrocities? 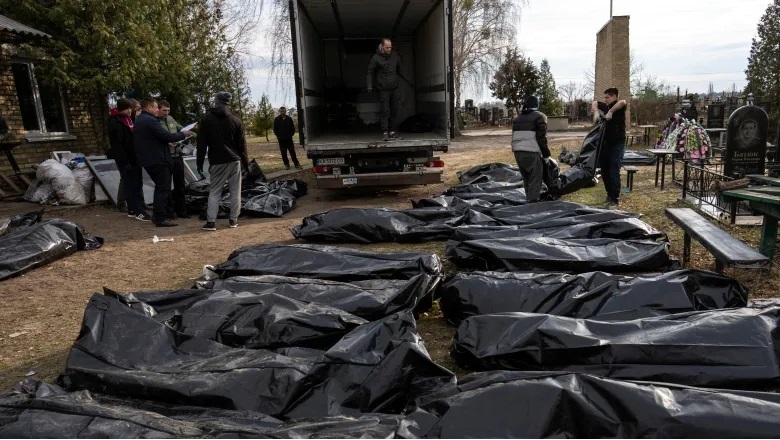 Cemetery workers are seen on the outskirts of Kyiv, loading the corpses of civilians killed in Bucha into a truck for transport to the morgue on April 6. Photo: Rodrigo Abd/The Associated Press/CBC

“Thousands of Ukrainians have been killed, tortured, shot by Russian soldiers. Civilians were executed with their hands tied behind their backs on the streets of Bucha. Women and children were raped and killed. The Russian army has shelled maternity wards, hospitals, schools, kindergartens, and humanitarian corridors. They have forcibly deported people to Russia. We carefully document every atrocity, every crime. We created a special online archive of these crimes for the world to know the truth, and for Russians to be held accountable for every Ukrainian drop of blood they spill,” he said.

Ukraine’s Ministry of Foreign Affairs says the evidence gathered of atrocities committed by the Russian army in Ukraine will ensure that these war criminals cannot escape justice. That may be wishful thinking. To bring these war criminals to justice, they must first be apprehended. And to be apprehended, Ukraine and the rest of the Free World must somehow find a way to bring them into custody – a tall order when Ukrainians are fighting a battle for their very survival and the rest of the Free World is sitting on the sidelines.

Oh yes, Western democracies have imposed sanctions that are being touted as the most comprehensive imposed against a major power since the Second World War. But how effective are they? The Russian ruble has regained its pre-war value on the international currency market. True this may be propped up artificially, but the fact remains that the sanctions haven’t come close to inflicting the damage that would compel Russia to reconsider its brazen aggression. And the petro-dollars that feed Putin’s war machine keep rolling in as Russia continues to export its oil and gas.

There have been symbolic acts like isolating Russia from international sports events and removing the country from the UN Human Rights Commission. But these remain symbolic acts. And how effective is the United Nations anyway? In a scathing critique in his address to that body on April 5 Ukrainian President Volodymyr Zelenskyy said Russia's actions were no different from those of a terror group, except that Russia is a permanent member of the UN Security Council. “Where is the security that the Security Council needs to guarantee? It is not there, though there is a Security Council… It is obvious that the key institution of the world designed to combat aggression and ensure peace cannot work effectively.

NATO countries are providing weapons to Ukraine. But even here it is like pulling teeth. At first only handheld weapons like Javelin anti-tank missiles and Stinger anti-aircraft missiles were provided. These did prove quite effective but bearing in mind the full military potential of the Russian Federation, much more is needed. Ukraine needs heavy tanks, it needs fighter planes, it needs anti-aircraft systems. One step in the right direction was taken by Slovakia which is providing its Soviet-era S-300 air-defense system to Ukraine. This is to be replaced with a U.S.-made Patriot system.

But what must be realized is the ultimate aim of Russia’s invasion of Ukraine is nothing short of genocide. Speaking with Newsweek, Holocaust expert Eugene Finkel, author of Ordinary Jews: Choice and Survival during the Holocaust, didn’t mince his words. “I am actually a firm believer that we are dealing with a genocide,” he said.

In an earlier tweet Finkel said that he had resisted applying the term the genocide. What changed his view was “more and more evidence” that Bucha “was not an exception” combined with, “explicit official rhetoric,” from Moscow.

He referred to an article by Timofei Sergeitsev published by the state-owned news agency RIA Novosti headlined “What Russia should do with Ukraine” which talked about the “final solution to the Ukrainian question”.

It expanded upon the ideas about the illegitimacy of Ukrainian statehood that Putin has endorsed, adding that most of Ukraine's population has “passively” enabled a “Nazi regime.”

Sergeitsev proposes “re-education” built on “ideological repression” which includes control of the mass media and school curriculum, among other things

Finkel tweeted that it was “one of the most explicit statements of intent to destroy a national group as such that I've ever seen.

“I have read a lot of Russian nationalist rhetoric in my life,” he wrote, “this is not some wild intellectual fantasy, it is a clear, actionable statement of intent by a state agency. The U.N. definition (of genocide) is problematic, but in this case, it fits like a glove.”

Were it any other country than Russia perpetrating those horrendous crimes, NATO would have created a no-fly zone and sent in troops to help. But the West is afraid. It’s afraid that Putin may actually start a nuclear war. This hesitancy has been criticized by none other than Philip Breedlove, a retired four-star U.S. Air Force general who led U.S. forces in Europe and served as NATO's supreme allied commander from 2013 to 2016. In a recent interview with RFE/RL, he stated:

“The bottom line is we in the West, certainly my nation, and NATO, are completely deterred in this matter. We have been so worried about nuclear weapons and World War III that we have allowed ourselves to be fully deterred. And [Putin], frankly, is completely undeterred. He has switched into the most horrific war against the citizens of Ukraine, it is beyond criminal at this point. You do not want to do what we have done, which is become deterred, and cede the initiative to the enemy.”

Indeed. Should Ukraine fall, Putin will not stop there. He will move on to the Baltic States and Poland. NATO will have no choice but to get involved. But how many Ukrainians will be murdered before this happens? How many people will be tortured? How many women will be raped in front of their children? How much damage will Ukraine suffer? Perhaps it is as Bob Dylan put it 60 years ago. “The answer my friend is blowing in the wind.”