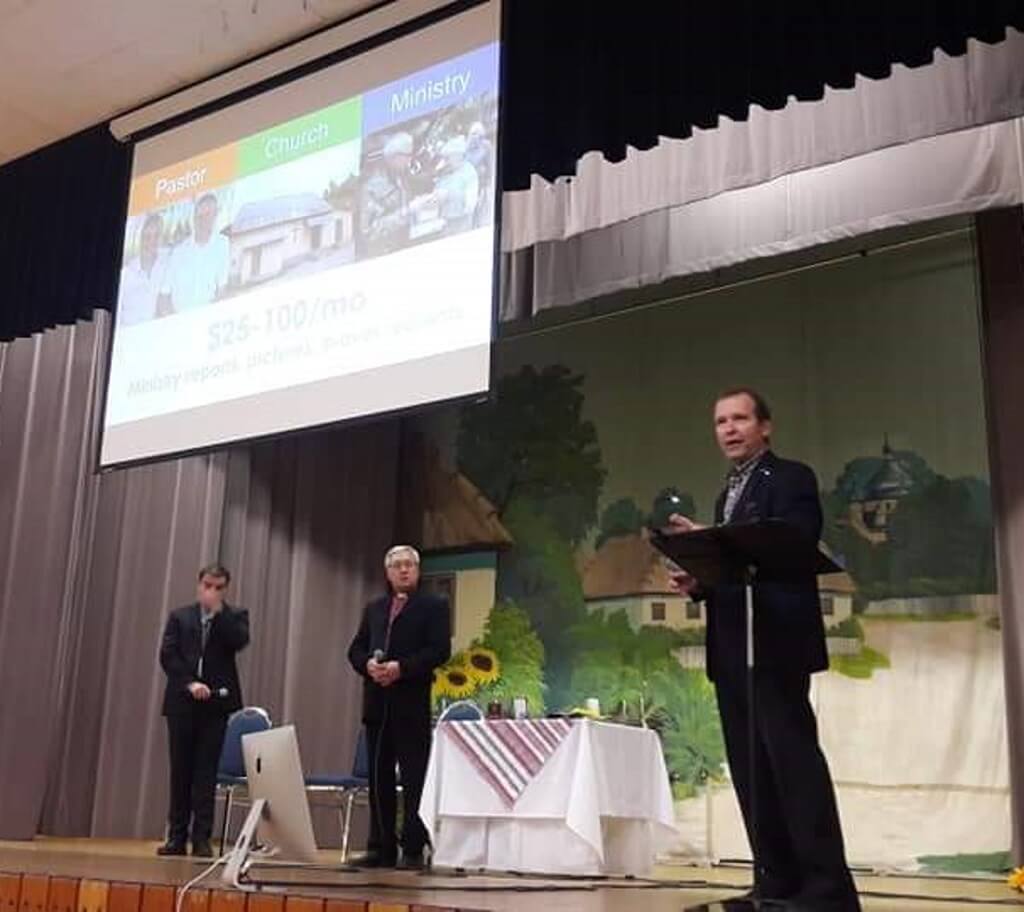 “We love Canadian people, we know they are praying for us. We Thank Canadians for being together with us in this war against evil.” That’s how Ukrainian soldiers signed a Ukrainian Flag with Thank You messages to Canadians for their support of the Military Chaplain Program in Ukraine.

Over 700 chaplains belong to Ukraine’s Independent Non-denominational Military Chaplain Association. Henadiy Prosyanko is one of them. Chaplains support each other in their work. They give people hope and demonstrate God’s love. The Chaplains believe God makes miracles using people and the people’s hands. Henadiy described his work at a HART Presentation October 21 at The Ukrainian Youth Unity Centre in Edmonton recently, where updates were given on HART’s current work in Ukraine.

Pastor Prosyanko, a missionary chaplain has been called to risk his life and the lives of his team in order to feed the hungry in the war-torn region of Eastern Ukraine. Henaidy provides refugee aid and civilian support to those who remain in conflict areas. Why? Because there is no food or food is hard to find and most live without heat, lights and water. Shelling continues frequently with no end in sight and there is no safe place to go. A loaf of bread or a small package of food is “a blessing from God”. His team is doing their work on a permanent basis. This ministry still goes on after 5 years because of God’s influence and his voice in the spiritual sphere. Soldiers need encouragement and prayer, people need food and prayer. Henadiy believes it is an honour and a privilege to be different. He brings food and hope to the hungry, encourages soldiers and brings Love & Hope to the darkest most forgotten places. Medical care is non-existent and it is hard to believe children are growing up in this environment. Henadiy’s Refugee Aid and Civilian support packages of hygiene kits, blankets, clothing, food and shoes are vital for survival. HART supports his essential work.

Henadiy has seen why there is a war in Ukraine. Ukrainians are being tested by an evil force. “There is A Need for All Ukrainians” explains the chaplain, “to be united now!” Ukrainians need not be distracted by conflicts and fighting over language, government, ethnicity, nationalism, religion, war or money “These are all divisive distractions. Putin works skillfully to divide us. We need to do this together, to help the elderly, to feed the hungry, help poor children, help refugees, help our soldiers. The government does not do it, the oligarchs will not do it – we must to do it!” he says.

Lloyd Cenaiko, president and founder of HART (1996 to present) emphasized that the biggest gap in world wide media is, the lack of world media coverage in reporting the war in Ukraine. The world has no concept of this war, including the poverty and the corruption experienced daily by millions of citizens. The world knows about the poverty in Haiti – it is all over the news media. The average monthly salary in Haiti is $150.00. In Ukraine, the monthly salary of a teacher is $175.00. No one knows about this poverty in Ukraine, nor how hard it is to pay for food. The world does not know that oligarchs in Ukraine own 67% of the corrupt economy. There is nothing anyone living there can do, things are stagnant. Food is expensive, fuel for vehicles costs $1.80 Canadian per litre. Today, the biggest threat for Ukraine is, Putin threatening war on Ukraine to protect his churches. HART has people on the ground in Ukraine who help the less fortunate. HART’s success comes from the network of extraordinary partnerships with local Christians and Churches in Eastern Europe. Dedicated and trustworthy leaders multiply the impact of a donation in the lives of the needy in their communities.

Poverty in rural areas prevails as well as in the cities. Numerous children suffer from poor housing, impoverished dysfunctional families and the numbers of orphaned children continue to grow. HART provides programs where the most neglected citizens can get some help. Sponsor a senior or a lonely Baba to give help and love and some dignity in the last phase of their life. HART’s Senior Care program is their newest initiative. HART provides Refugee Aid, Relief Aid, Aid for Children & Youth, Anti-Trafficking, Child Sponsorship resourcing children from a cycle of poverty, Education Scholarship Funds to assist those wishing to further their education, vocational training and support to schools, Mobile Medical Clinics, Medical Emergency Fund, Special Needs support for children with disabilities, Summer Camp Programs, Orphan Care Programs, Christian Orphanages and Foster Homes, Victim Rehabilitation. Legal Aid, Water Well Projects, Drug-Alcohol Rehab Farms, Play Centres for children, Prison Ministries, Programs for gypsy schools. Why is there such a huge need? Ukraine & Moldova are the poorest countries in Europe. Unemployment, despair and hopelessness coupled with extraordinary alcoholism rates make for a toxic situation for the family unit. The UN estimates that up to 78 percent of Ukraine and Moldovia’s population live in poverty. These two countries are also the two top “source” countries of human trafficking in the world. HART works with people on the ground and therefore involvement in many areas is successful because they have people in Ukraine who do the work.

To learn more about HART, visit their website for newsletters and to View their new GIFTS OF HOPE Catalogue. Give a Gift That Will Last www.hart.ca.