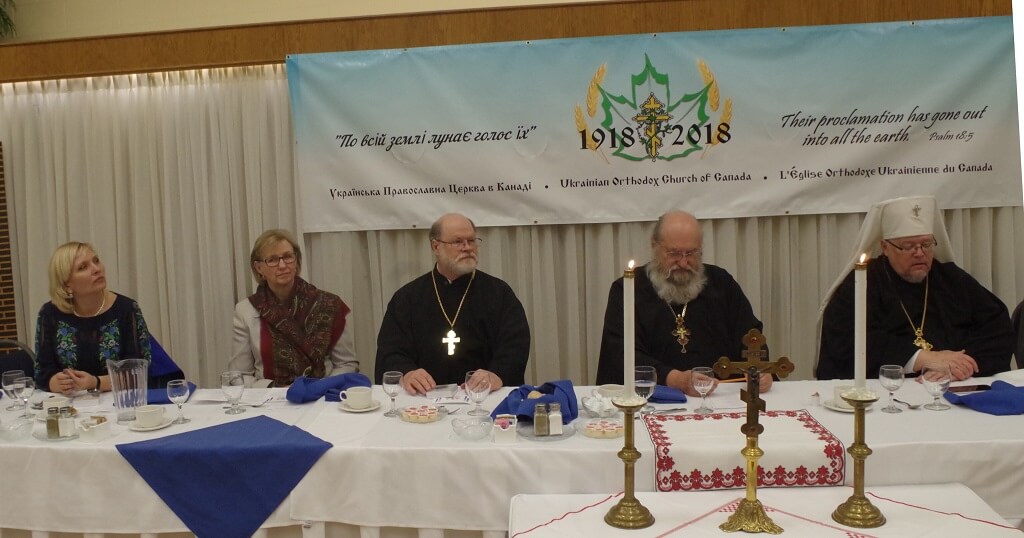 “I truly believe that only God has given us so much that we can’t comprehend the riches, the spiritual riches that we have received from on high on the occasion of this Centenary, the ability to gather and to pray and to celebrate in a free country,” said His Eminence Metropolitan Yurij at the banquet held at St. John’s Ukrainian Orthodox Parish Cultural Centre, Oct. 26, in conjunction with the assembly.

“As a special gift from God, today, we are witnesses and participants, and through the local bishop, His Grace Bishop Ilarion taking part in a world-shaking events in our ancestral homeland of Ukraine – the recognition of autocephaly for its Orthodox Church which has ramifications throughout the world, in the Ukrainian world and outside the Ukrainian world,” he added referring to the decision by the Ecumenical Patriarch of Constantinople Bartholomew to grant autocephaly to the Ukrainian Orthodox Church in Ukraine.

Bishop Ilarion is currently in Ukraine as one of two Eparchs appointed by the Ecumenical Patriarch to prepare the groundwork for the granting of a “tomos” which will give the Ukrainian Orthodox Church canonical status independent of Moscow. The other is Archbishop Daniel of Pamphilon from the United States.

Representing the Government of Ukraine at the banquet, Acting Consul-General and permanent Consul to Edmonton Nadia Kostenko stated:

“Today we live in historical time, in time when Ukraine deserved the right to have the Ukrainian Autocephalous Church. We are returning to historical justice.

“The victory is not only when Ukrainian land has been liberated. The victory is when for the first time, more than 300 years, Ukraine has got a real chance to create a united local Orthodox church and, most importantly, a Ukrainian church. Now, it is up to Ukrainians to elect the head of their local church. The state will not determine who will be the Patriarch of the new church, because this is not the government’s business. There will be no action by government fiat to support or not to support this or that candidate.

“The importance of this decision is hard to overestimate. The Orthodox church and its influence on its neighbors is one of the last remnants of the Russian empire. It is also one of the most effective instruments to spread Russian narratives and influence opinion. In the case of Ukraine, the stakes are even higher because it gives the aggressor-state direct access to the hearts and minds of Ukrainians. It’s not an overstatement to regard Ukraine’s independent church as a matter of national security.”

“Our two churches share not only this common history, but our hopes and desires for the future as well. If the challenges 100 years ago dealt with finding good soil for farming and strong logs to build houses and barns, today we face the new challenges of living in a secularized society which often rejects God and organized religion. It is our prayer that our two church communities will face these challenges together for the betterment of our Ukrainian people in Canada, keeping string our ties to our ancestral land Ukraine and always faithful to the Gospel message of Jesus Christ.”

Going “off-script” as he put it, Fr. Wojcichowsky said: “We the people of the Ukrainian Catholic Eparchy of Canada applaud and acknowledge the heroic efforts that is doing for the unification of churches.”

Very Reverend Archpriest Georg Podtepa brought greetings from Bishop Ilarion, who himself electronically connected with the banquet later that evening.