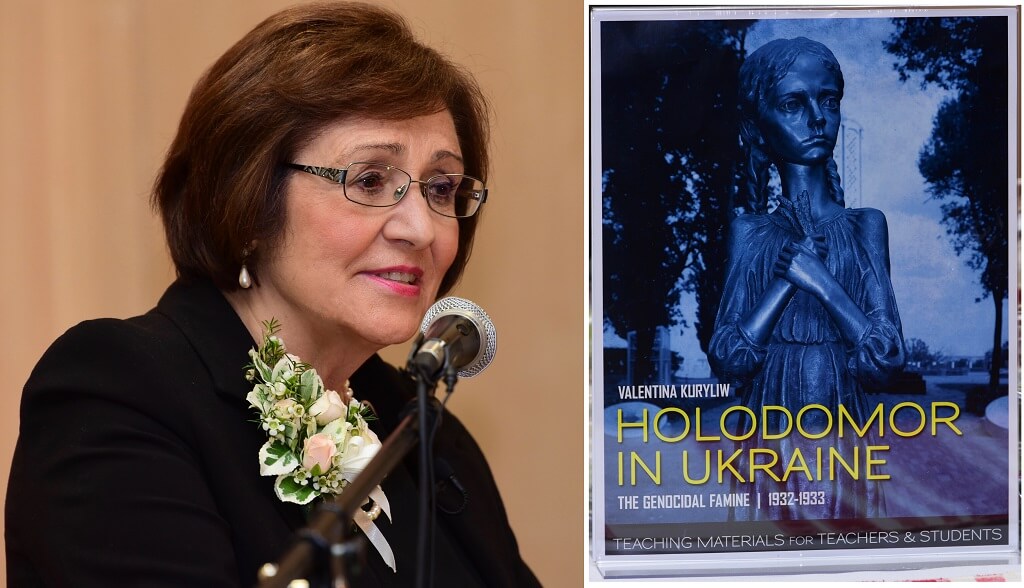 A new resource for teaching and learning about the Holodomor was officially launched on September 27 in Toronto. About two hundred people joined dignitaries at the hall of the Ukrainian National Federation for a presentation of Holodomor in Ukraine, the Genocidal Famine 1932–1933: Learning Materials for Teachers and Students, authored by Valentina Kuryliw, director of education for the Holodomor Research and Education Consortium (HREC) at the Canadian Institute of Ukrainian Studies (CIUS, University of Alberta).

A retired department head and history teacher with over 35 years of teaching experience, Kuryliw developed this much-needed resource for educators of middle and secondary school grades over the course of her career as a teacher and activist promoting Holodomor awareness and education. “The book is a labour of love,” said Kuryliw. “It gives me great pleasure to present what I have learned from teaching history, human rights, and the Holodomor, both in the Canadian classroom and in teacher-training seminars throughout Canada, the USA, and Ukraine.”

Professor Frank Sysyn, director of CIUS’s Toronto office, drew the attention of the audience to the dedication page. Kuryliw dedicates her book to formative influences: her parents, who survived the Holodomor, the American historian Professor James Mace, one of the first scholars of the Holodomor, and the millions of innocent victims who were starved to death and could not speak for themselves. Prof. Sysyn urged those present to buy two copies—one book for personal use and one to present to a teacher, school, library, or colleague.

Paul Grod, national president of the Ukrainian Canadian Congress (UCC), congratulated and thanked Valentina for her efforts as chair of the UCC’s National Holodomor Education Committee, and noted her contributions to Holodomor education, including a successful lobbying campaign to ensure that the Holodomor is included in the school curricula of five Canadian provinces.

Yvan Baker, a former Liberal member of the Legislative Assembly of Ontario—and a former student of Kuryliw—shared that her teaching had helped him to make sense of the experiences of his own survivor grandmother, who had hoped that one day Holodomor victims would be remembered and honoured. He accompanied Kuryliw at meetings with Ministry of Education staff to urge for inclusion of the Holodomor in Ontario school curricula.

Mark Melnyk, a colleague and vice-principal in the York Region District School Board, emphasized the need for engaging materials on the Holodomor. He praised the interactive lesson that Kuryliw created for the Holodomor Mobile Classroom, a state-of-the-art learning environment that travels across Canada, teaching about the Holodomor. Mr. Melnyk described the excitement that the arrival of this special bus caused at his school, and how her lesson immediately engaged his students and made the Holodomor come into focus for them. He also revealed that Kuryliw inspired him not only to teach about the Holodomor but to take a greater interest in his Ukrainian roots.

The Holodomor Learning Materials are published by CIUS Press as a project of CIUS’s Holodomor Research and Education Consortium. The book is available in a paperback edition for $49.95 (plus taxes and shipping; outside Canada, prices are in U.S. dollars). Orders can be placed via the secure on-line ordering system of CIUS Press at www.ciuspress.com or by contacting CIUS Press, 430 Pembina Hall, University of Alberta, Edmonton, AB, Canada T6G 2H8; tel.: (780) 492-2973; fax: (780) 492-4967; e-mail: [email protected]. The book is also available for purchase in Toronto at the Ukrainian Canadian Research and Documentation Centre (email: [email protected]; tel. 416-966-1819).