Five Stalks of Grain: A raw and powerful graphic novel about the Holodomor of 1932-33 that sheds light on Ukraine’s current agony 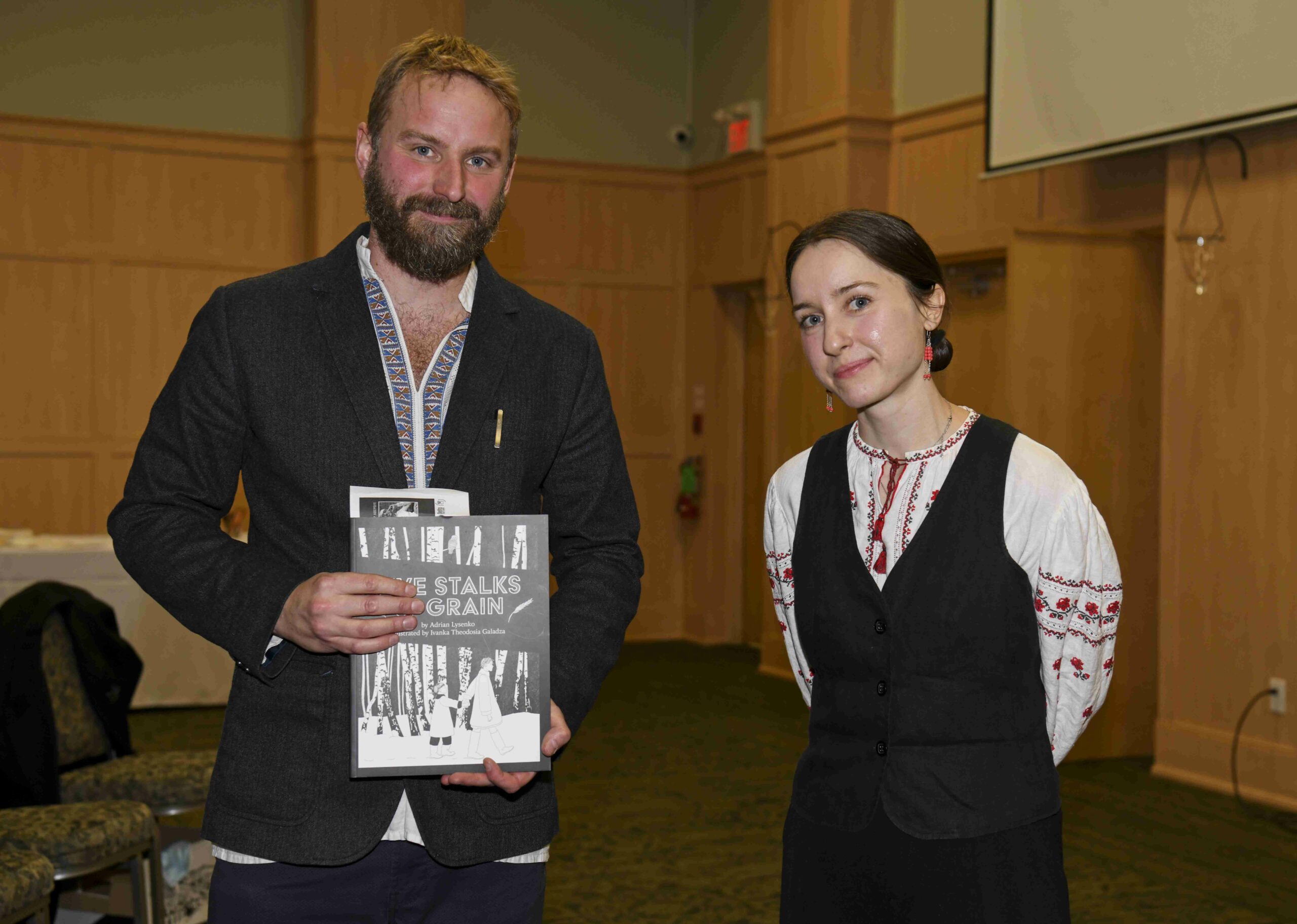 Author Adrian Lysenko and illustrator Ivanka Theodosia Galadza at the presentation of Five Stalks of Grain at the UNF Toronto Hall on November 26. Photos: Mykola Swarnyk

On November 26, 2022, the day the world community officially marked the beginning of the 90th anniversary of the Holodomor Famine-Genocide of Ukraine, an extraordinary book—Five Stalks of Grain— saw its Toronto debut by two young professionals and friends whose heritage beckoned that the story be told.

Author Adrian Lysenko of Thunder Bay and illustrator Ivanka Theodosia Galadza of Ottawa, both Ukrainian Canadians whose four grandparents were Ukrainian immigrants, began to nurture their idea still in 2014, deeply affected by Russia’s illegal annexation of Crimea and brutal invasion of eastern Ukraine resulting in a prolonged and devastating war. Reflecting on these and many other wounds that have been inflicted upon the Ukrainian people throughout its history, these two diasporans sought to create something that would help new generations of Ukrainians and non-Ukrainians alike to understand Ukraine’s suffering, the life-changing consequences of what Ukraine has experienced and, ultimately, its remarkable ability to rise again from the ashes as a free and democratic nation—and a beacon of hope. Their creation was shaped by the different perspectives Adrian and Ivanka bring to their craft: Adrian, a published author, editor, journalist, filmmaker, and lover of physical books, and Ivanka, a visual storyteller, artist, printmaker, social activist, and digital creative. At the intersection of their two perspectives, they discovered the form for their story: a graphic novel.

Ivanka and Adrian’s idea went through many changes, stops, and starts, as both the author and illustrator dealt with other important personal and professional commitments, but continued to sound its important message in each of their hearts. The two of them began to consider the recollections of older family, friends, and community members about the destructive Soviet-perpetrated Holodomor in Ukraine of 1932-33 and realized that this was the metaphor they sought. The project continued to gain momentum but took on added urgency with the outbreak of Russia’s war in Ukraine in February of 2022. As this war increased in intensity and cruelty, turning into a new genocide of the Ukrainian people, Ivanka and Adrian realized that the experiences and lessons of the Holodomor were more relevant than ever and that more people needed to learn about this history and how it is repeating itself today.

Although the two worked with each other for the most part remotely, Ivanka and Adrian were inspired by a vision for their project that transcended space and time. Thanks to the support of their spouses, parents, other family members, and mentors, such as celebrated Canadian author of youth books about war and also the Ukrainian experience, Marsha Skrypuch, whose assistance and encouragement were invaluable, they were able to bring their labour of love to life. The Toronto launch was hosted by the Ukrainian Women’s Organization of Canada (UWOC) Toronto Branch. Some years ago, on occasion of its 80th anniversary, the UWOC had engaged Adrian to document its storied organizational history in film and so, welcomed the opportunity to showcase Adrian and Ivanka’s work. The well-attended event, held in the Trident Banquet Hall of the Ukrainian National Federation of Canada Toronto Branch, was graciously emceed by Mrs. Nadia Ostapchuk, UWOC Toronto’s corresponding secretary, who was also involved in the organization’s film project. Adrian and Ivanka shared with the audience something of the book’s development, including a taste of what was inside through a brief reading accompanied by several images from the book on screen, and concluded with their reflections on the whole compositional journey, expressing their deep gratitude to everyone who had helped make Five Stalks of Grain a reality.

During the question-and-answer portion of the evening, Adrian and Ivanka explained that it was not easy to find a publisher for their project, but once Ivanka had added an epilogue to the story, the full contextualization of their visual narrative was complete and drew the attention of the University of Calgary Press, which has appropriately published the book as part of its Brave & Brilliant Series. Adrian and Ivanka are considering having the book translated, into French and Ukrainian to begin with, and in the meantime are making every effort to reach different audiences. In this regard, Five Stalks of Grain has been included in the Ed Webinars for Educators Series organized by the Holodomor Research and Education Consortium (HREC) of the Canadian Institute of Ukrainian Studies, University of Alberta. A suggestion was also made that they consider producing an animated short film version. Five Stalks of Grain has already received considerable and favourable media coverage, including the CBC, Toronto Star, and Globe and Mail, as well as an array of community media. A number of well-known book reviewers and purveyors have added the novel to their lists of top picks and must-reads. In closing, Adrian and Ivanka encouraged others to take up the torch and tell Ukraine’s Holodomor and other tragic stories using every talent and technology at their disposal.

The program concluded with a moving candle lighting and moment of silence in memory of all the victims of the 1932-33 Holodomor Famine-Genocide, their families, and descendants, and also for the victims–defenders and ordinary citizens–of Russia’s current war in Ukraine. A reflection from 2020 HREC Education Award recipient, Sue Kenney, was shared as a reminder to the audience that we, who are outside of Ukraine, “are not starving, we’re just hungry.”

Five Stalks of Grain follows children Nadia and Taras, who embark on a terrifying journey in search of a safe haven after their mother is executed, having been accused of hoarding a minuscule amount of food. A synopsis is available here: https://www.publishersweekly.com/9781773853758. Although, unsurprisingly, copies of the book at the event sold out completely, Five Stalks of Grain can be purchased from Koota Ooma Ukrainian Books, Gifts & Toys: https://kootaooma.com/five-stalks-of-grain.html.

Special thanks to the Shevchenko Foundation for its generous support.

“Historical fiction at its finest, Five Stalks of Grain is powerfully written and beautifully illustrated, drawing on Ukrainian artistic traditions to tell a story of loss, grief, and hardship with delicate strength. It is a record of a time of profound suffering and a reckoning with the human cost of a tragedy shaped by politics and policy.” (University of Calgary Press)

Ivanka speaking about the book:

Adrian speaking about the book: