A salute to community volunteers 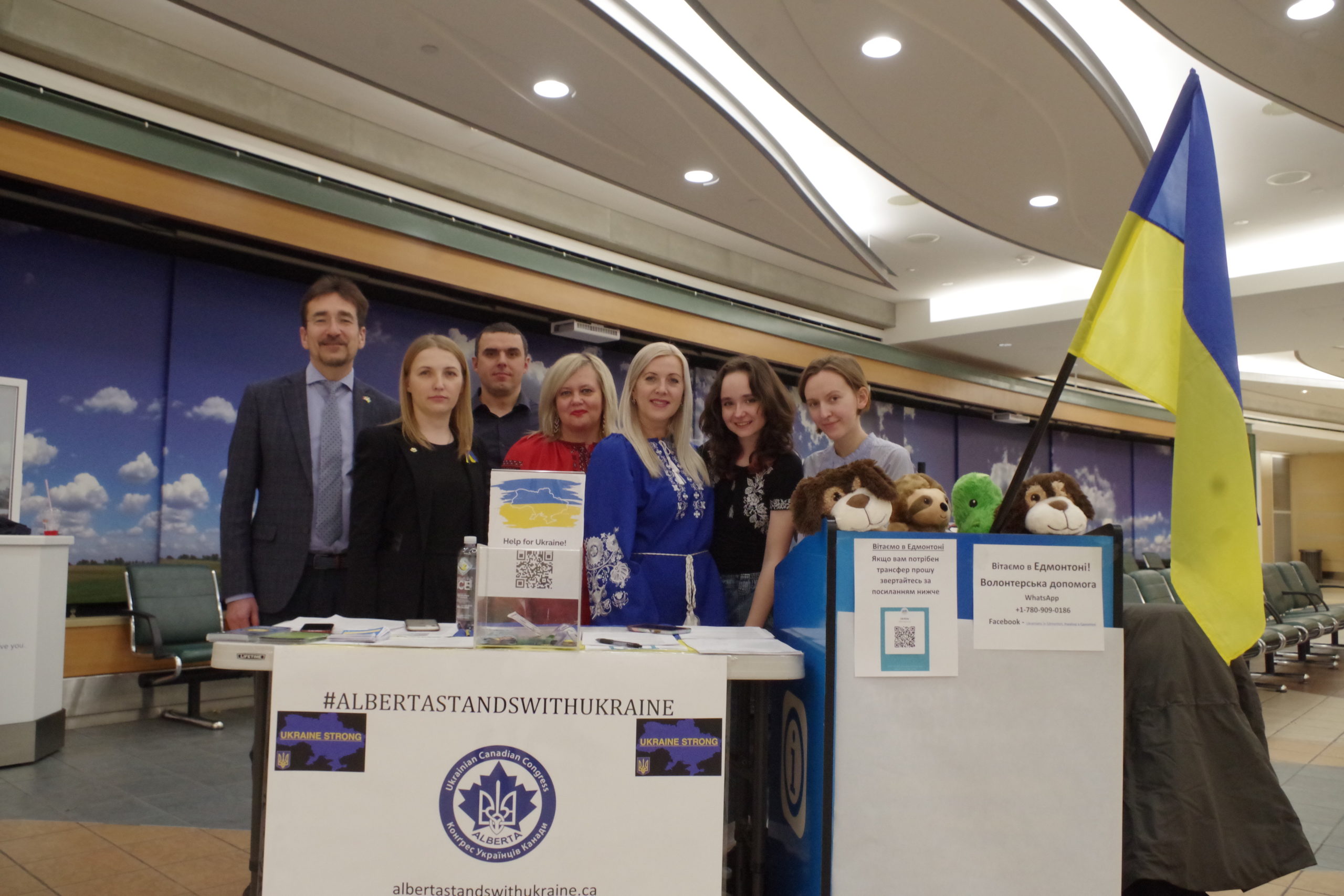 As we reported in the previous issue, 62 displaced Ukrainians arrived in Edmonton March 28 in the first and so far only airlift of refugees from Poland to Canada. They came free on a Boeing 787 Dreamliner from Warsaw landing at 6:45 and, after approximately two hours of processing, were welcomed by volunteers from the Ukrainian community who led them from the international arrivals gate to a special reception where friends are relatives were waiting to take them to their homes.

This was not a government-sponsored plane which brought them to Canada, but one that was made available through a private initiative. It was donated by Polish Lot Airlines to pick up humanitarian supplies in Edmonton under a project organized by former Alberta Premier Ed Stelmach, former Alberta Deputy Premier Thomas Lukaszuk and the Canadian Polish Historical Society. Shell Canada donated 50 tonnes of jet fuel to fly the plane.

Once the plane was confirmed, the organizers contacted refugees through the Polish Ministry of the Interior which works with all the charities in Poland. They put the word out to any refugees who were interested and who had a family in Canada. The welcoming operation was organized by the Alberta Provincial Council of the Ukrainian Canadian Congress, headed by Orysia Boychuk and the Edmonton Branch of the UCC, headed by Anastasia Khoma and proceeded very smoothly with the help of dedicated volunteers.

The Ukrainian community already had a welcoming program in place at Edmonton International Airport that was spearheaded and coordinated by the Edmonton Branches of the Ukrainian National Federation, headed by Ivan Lypovyk and the Ukrainian Women’s Organization, headed by Iryna Kravets-Kuzmicz. Responding quickly to an urgent need they mobilized other Ukrainian community organizations in Edmonton and set up an information table operated by volunteers by the domestic arrivals gate because the vast majority of travellers from Europe connect to Edmonton in other Canadian cities. (There are only two direct flights per week arriving in Edmonton from Europe – both from Amsterdam and volunteers go out to meet them). Since there is no way of knowing who is coming, from where and at what time, they set up 144 shifts of two hours each. Displaced people arriving in Edmonton are given information packages in Ukrainian telling them how to get a SIN number, obtain a bank account, Alberta Health Care and so on. They also collect donations from passersby and the response has been very generous. During the first week of operation over 40 incoming refugees were processed. The Edmonton Branch of Ukrainian Canadian Social Services (UCSS), working in conjunction with the UCC has prepared a data base of people willing to host the displaced persons in their homes. The response has been so great that they have had more people offering their homes than they can handle at this time. It has also arranged for hotel rooms to accommodate them until a placement is arranged.

As of April 1, the Red Cross has also set up a welcoming booth at the airport as per agreement with the federal government, but the Ukrainian community will continue with its own program alongside the Red Cross one.

So far, the displaced people who have arrived have come under visas that were approved under the old rules. Applications under the new Canada-Ukraine Authorization for Emergency Travel (CUAET) program have not been processed yet. How many will be coming once CUAET is in full force, no one knows. For one thing, there is no financial support being provided for the displaced Ukrainians by the federal government, nor is any government transportation provided as was the case with other refugees from war. People wishing to come to Canada from one of the European countries have to cover the cost themselves and this can be prohibitive. As Lypovyk explained, the amount of money it would cost a family to come to Canada, could go towards the purchase of a used car. So, while the government says the program is open to an unlimited number of people, it is nevertheless constrained by processing times and financial considerations.

The UCC has urged the federal government to implement several measures including:

• To continue working to implement an orderly plan to bring displaced persons to Canada engaging government, corporate and individual donors;
• To implement a 90-day transition plan for newcomers that includes provision for basic necessities such as food, shelter and access to health care;
• To arrange for health care in all provinces and territories, including PTSD counselling for adults and children who have been traumatized by war;
• To arrange for access to schooling for children in all provinces and territories;
• To provide federal childcare funding for displaced families.

While the government had pledged to provide some form of assistance in the future, it has not done so to date, nor has provided any timeline for implementing such assistance.

But members of the Ukrainian community have risen up to the challenge. As Lesia Soltykevych, one of the volunteers at the airport, explained:

“I am volunteering because I feel it’s my responsibility as a Canadian citizen, and as a citizen of the world to preserve democracy and to preserve the foundations of democracy around the world and I think it is appalling that Ukraine as a sovereign nation is being invaded and all of its democracy and all of the forward development that have happened in Ukraine have been blown to smithereens. So I’m here in solidarity with my ancestors and my Canadian people here to support the Ukrainians that are coming and fleeing basically for their lives.”

That is the spirit that is motivating so many members of our community to step in and help in which ever way they can. We salute them for their dedication, urge others to take up the challenge and the government to finally provide some financial support.

Postscript: If you want to volunteer to greet refugees, please contact Ivan Lypovyk at: 780-953-6621, email [email protected] To donate to UCSS Edmonton please go to: https://ucssedmonton.ca/.