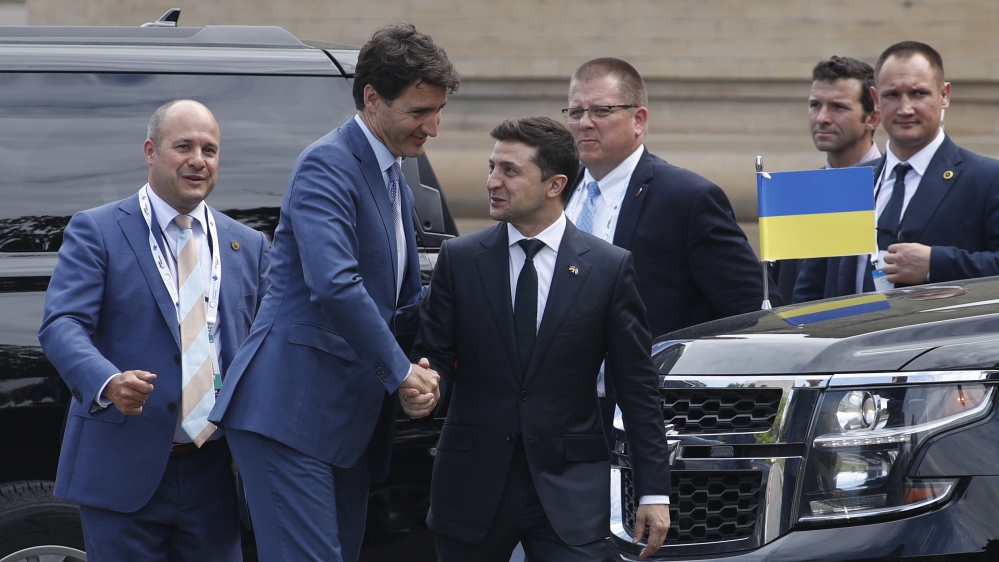 “As a special partner of Ukraine, Canada could take the lead among the allies who support a MAP decision for Ukraine. Canada’s assistance will be an important signal of support from true friends,” said Zelenskyy.

The President of Ukraine also thanked Trudeau for the Canadian military training mission Operation Unifier and suggested considering the possibility of expanding the training program for the Armed Forces of Ukraine, in particular, increasing the number of Canadian military instructors, according to his presidential website.

Zelenskyy made a similar request to NATO Secretary General Jens Stoltenberg in another telephone conversation that same day.

“We are committed to reforming our army and defense sector, but reforms alone will not stop Russia. NATO is the only way to end the war in Donbas. Ukraine’s MAP will be a real signal for Russia,” he said.

Zelenskyy’s requests come after Russia started a major buildup of military forces along its border with Ukraine.

The buildup, which started last month, has sparked alarms in both Ukraine and in the international community. In addition to the buildup, there has been an increase in violence along the Donbas frontline.

“In recent weeks, we have seen a very dangerous tendency to increase the number of ceasefire violations by the Russian occupation forces and the number of Ukrainian defenders killed,” Zelenskyy said.

“Such a permanent presence should be a powerful deterrent to Russia, which continues the large-scale militarization of the region and hinders merchant shipping,” said Zelenskyy.
In his own readout of the conversation, Trudeau made no mention of Zelenskyy’s requests, so New Pathway – Ukrainian News emailed a question to the Prime Minister’s Office which stated:

”Bearing in mind Canada’s strong support for Ukraine in the past including the leading role we played in getting Ukraine to be recognized as a NATO Enhanced Opportunities Partner, and the threat to world peace posed by the Russian Federation’s recent buildup of troops along Ukraine’s border, would you be willing to:
“a) support Ukraine’s bid to join the MAP program and advocate for this with our NATO allies; and
“b) expand both the scope of Operation Unifier and number of CAF personnel within the program?”

In response, Press Secretary Ann-Clara Vaillancourt referred us to the readout. When we sent another email stating that didn’t answer our questions, she replied: “We don’t have anything to add on the record at this time, I am referring you to our readout.”

On behalf of the Conservatives, Shadow Foreign Affairs Minister Michael Chong and Shadow Defense Minister James Bezan sent us a joint press release in which they stated: “Conservatives call on the Trudeau government to counter Russia’s threatening moves by increasing support to Ukraine through the supply of military defensive aid and reoffering the use of RADARSAT imaging to assist in the identification of Russian troop movements and equipment.”

“The NDP will continue to strongly support Ukraine’s bid to join the MAP program and we have and will continue to push the government to advocate for this with our NATO allies. That Prime Minister Trudeau and (Foreign Affairs) Minister (Marc) Garneau have been unwilling to explicitly state their support for Ukraine’s bid and their failure to adequately support the bid via advocacy efforts and multi-lateral diplomacy is very disturbing.

“Further, the NDP would expand both the scope of Operation Unifier and number of CAF personnel within the program. In December 2018, the NDP called for an extension of operation UNIFIER after an unprecedented act of aggression by Russia which seized three Ukrainian ships and their 20 crew members off the coast of Crimea. As you know, in March 2019 the operation was renewed. The support needs to be renewed and increased to acknowledge recent increased aggression by Russia.

“In addition, Canada should deepen its support for people-to-people links, visa-free travel for Ukrainian citizens and reinstatement of the Youth Mobility Agreement. Through Global Affairs Canada, Canada should also extend existing development assistance funding,” she said.

Ukraine’s Ambassador to Canada Andriy Shevchenko says Canada is in a unique position to help because no other country knows Ukraine’s armed forces the way it does.

MAP is a NATO program of advice, assistance and practical support tailored to the individual needs of countries wishing to join the Alliance. Countries participating in the MAP submit individual annual national programs on their preparations for possible future membership.

These cover political, economic, defence, resource, security and legal aspects. Participation in the MAP helped prepare the seven countries that joined NATO in the second post-Cold War round of enlargement in 2004 (Bulgaria, Estonia, Latvia, Lithuania, Romania, Slovakia and Slovenia) as well as Albania and Croatia, which joined in April 2009. Montenegro, which joined the MAP in December 2009, became a member of the Alliance in June 2017.
The Republic of North Macedonia, which had been participating in the MAP since 1999, joined NATO in March 2020. Currently, Bosnia and Herzegovina are participating in the MAP, having been invited to do so in 2010.