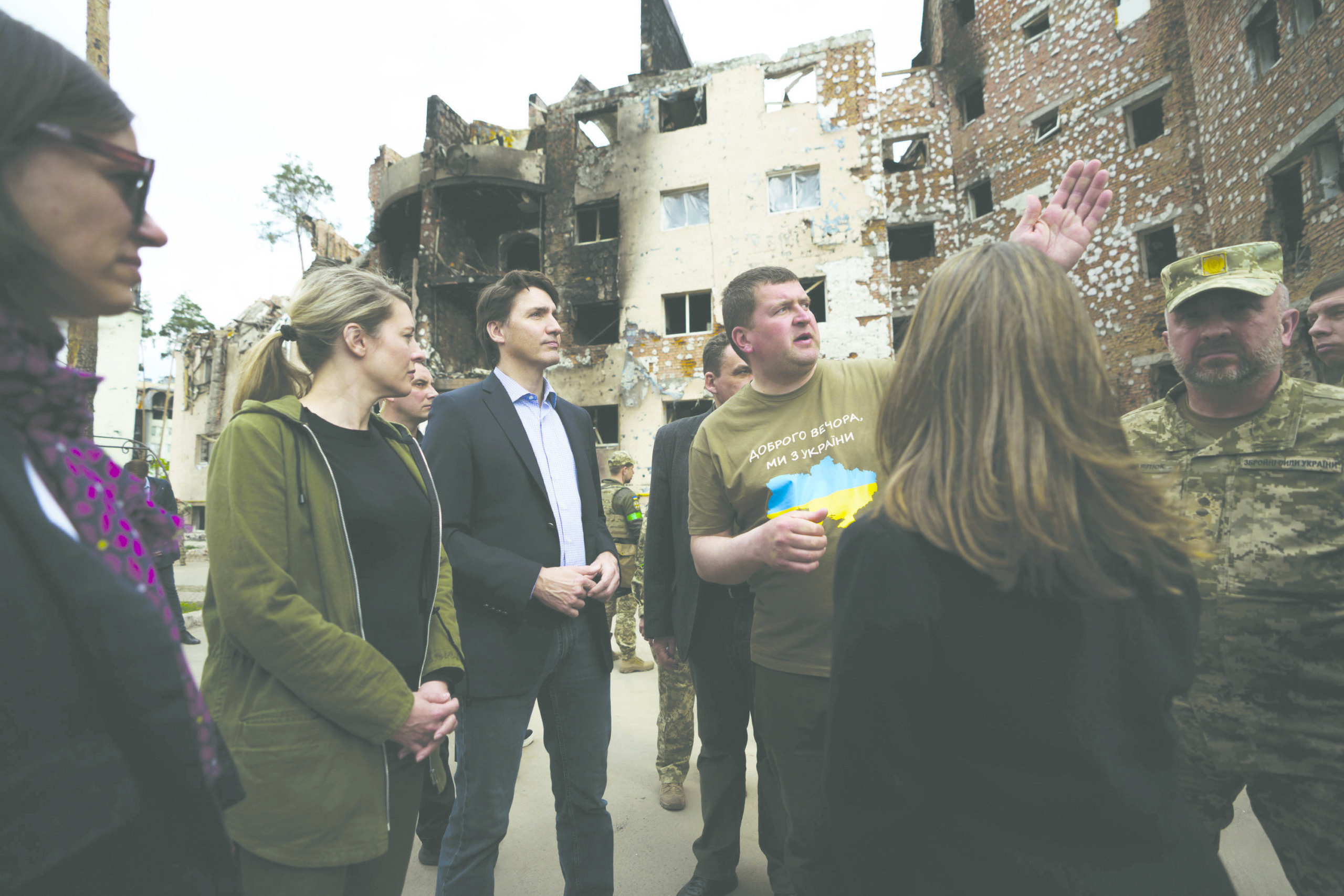 Trudeau also announced that Canada is imposing new sanctions on Russian individuals and entities in connection with Moscow’s invasion of Ukraine.

The additional measures and investments include:
• Providing an additional $50 million in military assistance, which builds on recent contributions of artillery, ammunition, and civilian-pattern light armoured vehicles:
-18 drone cameras, including in-service support and repair,
-$15 million of high-resolution satellite imagery,
-Up to $1 million in small arms and related ammunition, and
-Additional ammunition for M777 howitzers;
• Allocating $25 million, from Canada’s $100 million contribution for humanitarian aid in the region, to the World Food Programme to address food security in Ukraine; and
• Contributing $10 million in funding to support human rights, civil society, and demining in Ukraine, in particular:
-$1.5 million to the United Nations Women’s Peace and Humanitarian Fund;
-$2.5 million to the United Nations Office of the High Commissioner for Human Rights to monitor, document and assess human rights violations;
$775,000 to Front Line Defenders to support human rights activists and organizations;
-Up to $2 million to German Marshal Fund of the United States to support civil society actors at risk;
– Up to $1.15 million in digital emergency support for civil society in Ukraine; and
-$2 million to HALO Trust for mine action emergency response.

The Prime Minister also announced his intention to temporarily remove trade tariffs on Ukrainian imports for a period of one year and that Canada will be imposing new sanctions on 40 Russian individuals and five entities, oligarchs, and close associates of the regime in the defense sector.

During the news conference, Zelenskyy said he welcomed Canadian support, referring to Trudeau as the leader of a country from which Ukraine could not ask for more support.
Zelenskyy noted, however, that Canada could be influential in persuading other, more heavily armed NATO members to provide more advanced weaponry to Ukraine.

He also pressed Trudeau to support Ukraine’s call for a modern-day Marshall Plan — a reference to an Allied program to reconstruct the economies of western and southern Europe following the Second World War — for his war-shattered country.

Earlier that day, the Prime Minister, Deputy Prime Minister, and Minister of Foreign Affairs participated in a flag raising ceremony to mark the re-opening of the Canadian Embassy in Ukraine. Ambassador Larisa Galadza, together with a team of additional staff members, will resume diplomatic operations in Kyiv as part of a gradual restoring of Canada’s full diplomatic presence and services. Until further notice, consular and immigration services will continue to be provided in Poland and many other European cities in the region. 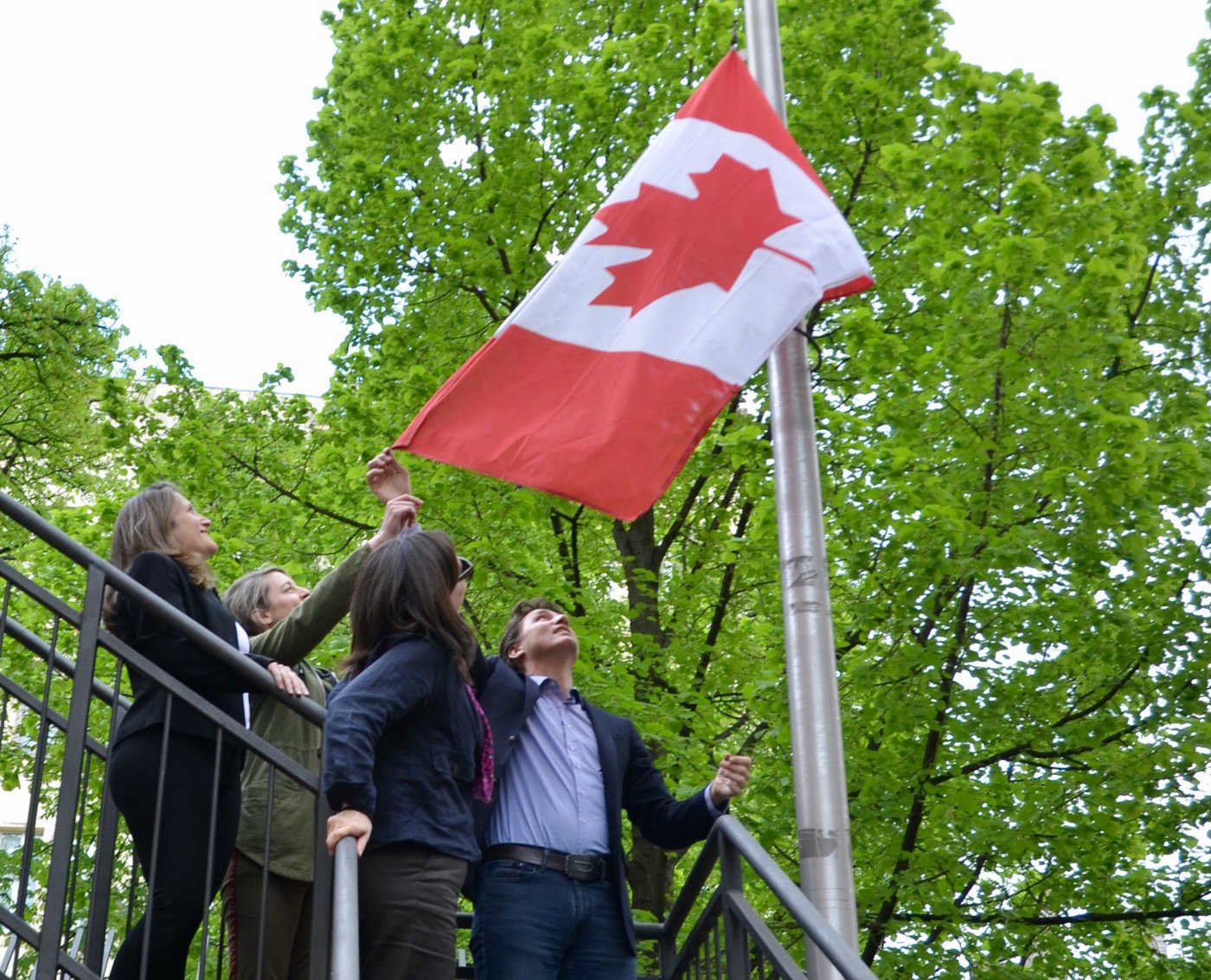 Prime Minister Trudeau also visited Irpin, where he witnessed firsthand the reckless brutality of Vladimir Putin’s illegal war. Russian forces have terrorized and killed civilians and destroyed homes and neighbourhoods. Canada is leading efforts to ensure they are held accountable for war crimes and other egregious violations of human rights. At the same time, the Prime Minister also witnessed the strength and resilience of Ukrainians, and despite efforts by Russia, Kyiv still stands strong and proud today.

In a bilateral meeting, the Prime Minister and President Zelenskyy discussed the historic partnership between their two countries, the situation in Ukraine, and the need for additional international support – including humanitarian, financial, and military assistance. The two leaders also discussed global efforts to impose severe and lasting sanctions on Russia in response to President Putin’s invasion of Ukraine. Prime Minister Trudeau reiterated Canada’s unwavering support for Ukraine and ongoing commitment to help in any way possible.

During his visit, Prime Minister Trudeau and President Zelenskyy participated in a G7 Leaders’ meeting. Together with leaders from the G7, the Prime Minister and President commemorated the end of the Second World War in Europe. The leaders condemned President Putin’s unprovoked, unjustifiable and illegal war, and Russia’s horrendous attacks on civilians and civilian infrastructure. The G7 reiterated its steadfast military, financial, and diplomatic support for Ukraine and committed to phasing out reliance on Russian energy, imposing additional sanctions, combatting Russian propaganda, and addressing the international challenges caused by President Putin’s war – particularly global food security.

“As Russia continues its ongoing illegal and unjustifiable war against Ukraine, Canada will continue to be there to support Ukraine and its people. I would like to thank President Zelenskyy for hosting this visit, but also more importantly, for his leadership. Together with Ukrainians, President Zelenskyy is defending the values at the very heart of democracies. His courage and the courage of Ukrainians is inspiring, and we will continue to do everything we can to make sure Ukraine gets the support it needs,” said Trudeau.

“Canada and our allies are united in our condemnation of Vladimir Putin and his war of aggression, and we are united in our support for the remarkable people of Ukraine who are so bravely resisting his assault. We know that in standing up for themselves, the people of Ukraine are standing up for democracy and international law—and we stand with them. Today’s visit is a key opportunity for Canada to further underscore that unwavering support,” noted Freeland.

“When the Russian regime invaded Ukraine they had gravely underestimated the response of the allies and our commitment towards the people of Ukraine, who continue to fight with courage for their country. Canada will always be a friend to Ukraine and we are here in Kyiv to show our unwavering support. From mapping mines to making sure Russian forces are held accountable for their crimes, Canada is doing its part to support Ukraine,” stated Joly.