The Touchstone that is Shumka 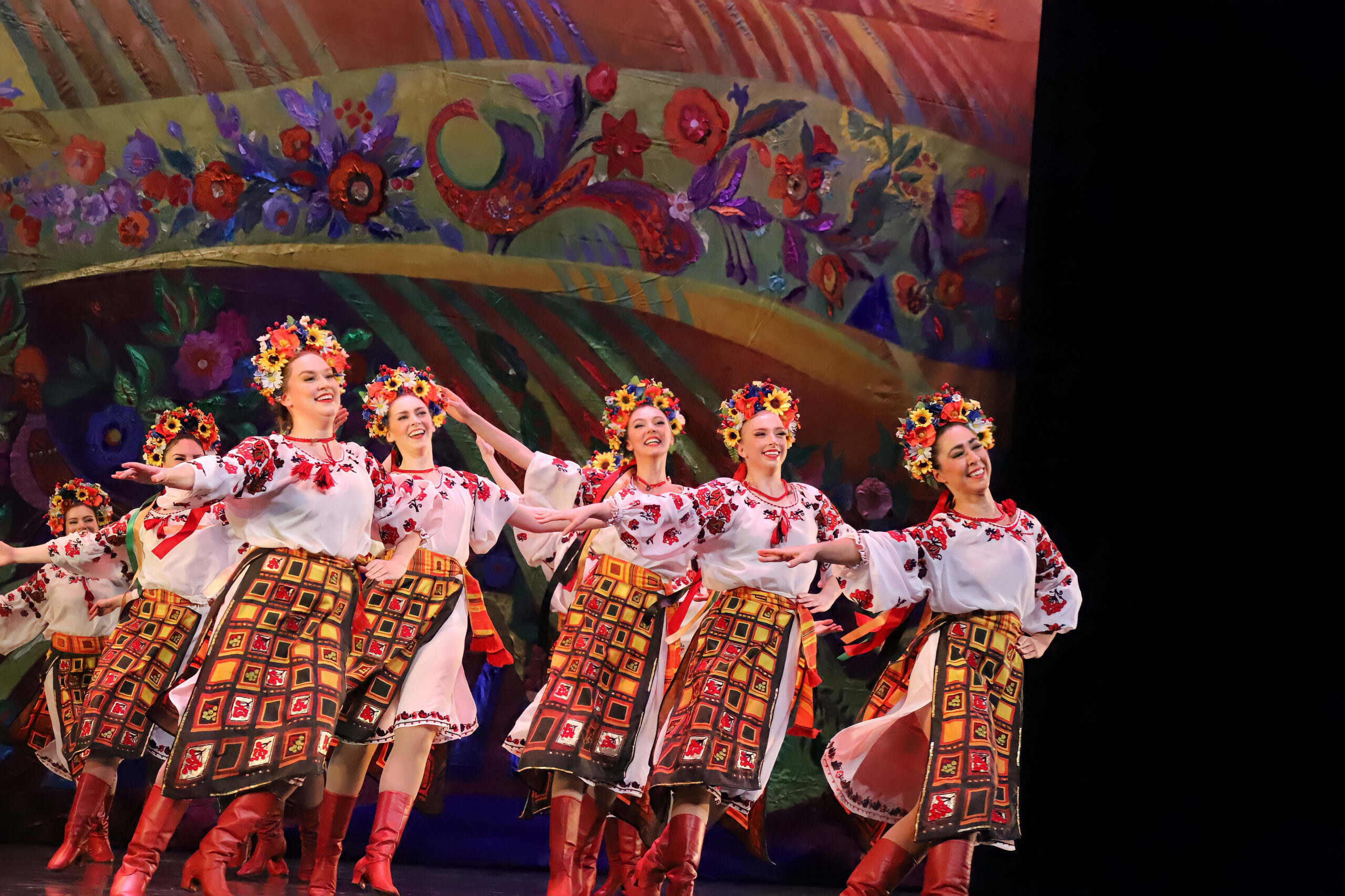 Shumka has long since come into its own. It is both the artistic troupe and an organization on a level which many aspire to reach. In Alberta, when one thinks of Ukrainian Dance, Shumka is synonymous and on the tip of the tongue, whether or not one has any Ukrainian background. They brought four numbers to life in their latest tour.

If you haven’t seen it yet, MOSQUITO’S WEDDING is a must for you the next time it comes to town. The music quote of “All We Need is Love” is such a clever Beatles reference and play on words in this modern adaptation of a Ukrainian folk song/Canadian storybook, full of insects of all kinds. 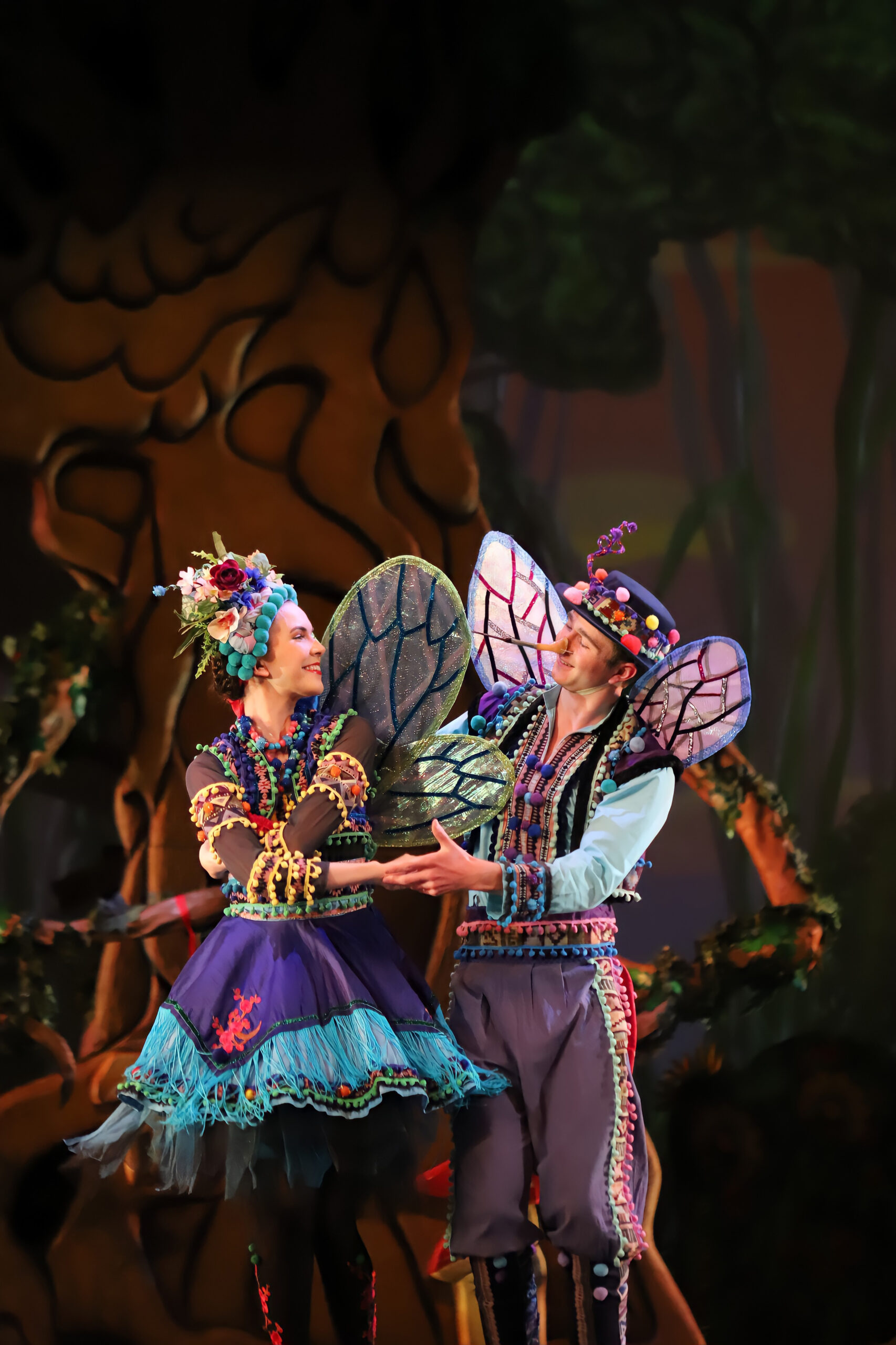 Puppeteer magic brought butterflies to life. The caterpillar a la Chinese dragon, with its colourful legs again gave a nod to the most adorable beetles. Lady bugs, a cricket, mosquitos and more all came alive in masterfully designed playful costumes, undeniably both theatrical and recognizable in Ukrainian folk style.

The backdrop and wisdom of the tree of knowledge came alive with moving eyes and mouth, and help from lighting effects and dripping moss. At times the backdrop was almost too busy with so much to look at including the changing of the sun and moon.
The music was refreshing and artistic license well employed.

The entire affair was a vehicle showcasing Shumka’s talent. The many different tiny creatures easily encompassed regional Ukrainian flavours. Frenzied Hutsul patterns, Transcarpathian with its lovely classic lift, an Arkan vibe with an homage to woodcutters, and the ability to mix in movements like the precise patterns of Bukovynian steps kept the celebration and wonderfully fun party in full swing. Ceremonies, elements of folk culture and faith practices were woven into the fabric of the story, including the call of the trembita, the significance of the wedding bread and the wearing of the marriage sashes by the wedding party.

The story was captivating and always moving forward. There was a twist to the plot, with a modern gender role play reversal in the storyline The tomboyish strong woman character with a sensitive male groom was delightful in this dance. Accolades all around for this family-friendly accessible story.

PROMISED LAND was entirely on film. This was a departure from what we have come to expect from Shumka and it was a brave success for a crowd that came to see a live performance. The film allowed us to be transported directly to the open air of a Ukrainian Canadian early pioneer settlement. We saw more views of the folk dance without choosing different seats in the theatre. We could see circles from above and from inside. We saw expressions up close on the large screen, as if we were right there as part of the dance. Dancing on grass and uneven terrain was not easy, but brought us closer to traditional folk dance. It was an interesting and satisfying performance to watch on film.

The entire evening actually began with an uncharacteristically long speech presentation – but it was necessary and well-delivered by the two speakers. Les Sereda, Shumka’s Artistic Director, brought home the message that seven months into the war in Ukraine it is more than ever the duty of the diaspora to uphold Ukrainian culture. The sombre message brought the audience together. While all program notes were available through a QR code, Mr. Sereda voiced the dedication of the second number of the night to the respected musical collaborator Yuri Shevchenko, who lost his life in March. We also heard of some behind-the-scenes news, such as the completion of the first 3-D filming of a Shumka production. Having experienced one short film by Shumka, the next one sounds intriguing. Executive Director Darka Tarnawsky introduced local heroes of Ukraine highlighting aid of all sorts that has been raised and delivered by these individuals and organizations. Tens of thousands of dollars in support was acknowledged. “Glory to Ukraine” rang out, with the now known response echoing automatically from those in attendance. A deserved standing ovation was spontaneous.

The third number of the night was MY YEH, a quiet and flowing trio saluting the courage and poignant heartache in Ukraine today. The audience was still and mesmerized as the three ladies poured compassion into the dance. There is much pressure put on the middle dancer to maintain impeccable spacing throughout any trio formation. This was at times a work in progress, but the emotion was always heartfelt.

ECHOES OF HOPAK was without doubt the pinnacle. More than a dozen couples, wearing light and free flowing costumes took the stage. As wave after wave of dancers came, the costumes became fuller and more traditional from Central Ukraine, as the dance progressed. When the music cue came for the actual Hopak, the audience response was immediate. The dancers were impressive with no loss of speed in circles or while seamlessly navigating under each other’s arms. Larger-than-life photographs on the backdrop were charming as they faded in and out, as an artful tribute to Shumka’s history and growth. There was so much to see.

Everyone was light on their feet. Use of spotlights for soloists allowed varying patterns to take place for the chorus, with more variation than often seen in hopaks. More than just lines and columns and mirrored semi-circles, the choreography was updated and brilliant.

Precision group work was celebrated and there was solo after solo after solo. Plazunets performed with speed around the semi-circle; leaps were done with grace and split leaps three-fold at times! The turns were as together as Olympic pair skaters, including double-turns in the air. This Hopak choreography was both familiar and innovative. What a marvelous balance!

There was almost unending applause before the encore. I wish I had timed it in order to quote definitely for readers to believe that it happened.

SHUMKA ON TOUR was a triumphant return as the arts begin to recover from the hits of COVID-19. Audiences were treated to eight performances in five cities. We can hardly wait for the live film screening of Shumka’s Nutcracker performance scheduled for December 17, 2023 back in this Northern Alberta Jubilee Auditorium. Hope to see you there.