The ROC is not a true religious body. It has abandoned the teachings of Jesus Christ for the propaganda of an evil empire 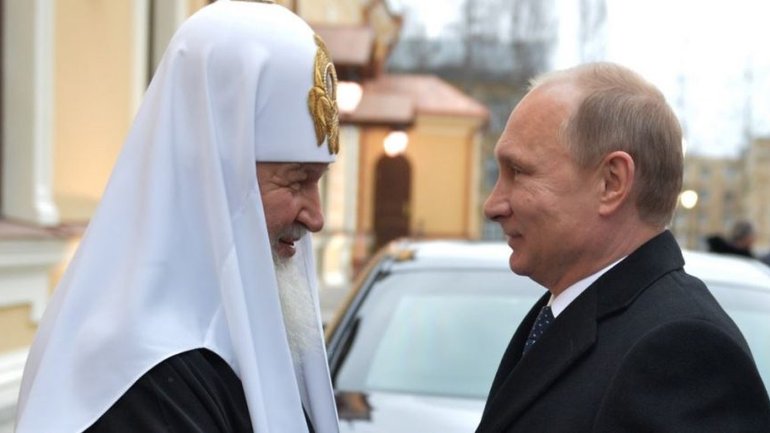 President Volodymyr Zelenskyy has called upon the Verkhovna Rada to approve a law “making it impossible for religious organizations affiliated with centres of influence in the Russian Federation to operate in Ukraine.” This is aimed directly at the Russian Orthodox Church (ROC) and its Ukrainian affiliate which operates under the jurisdiction of the Moscow Patriarchate.

The Kremlin and its sycophants in the Western media have reacted predictably.

That would be fine if the ROC were a true religious body and a true Christian Church.

But the reality is much different.

A Christian church does not abandon the teachings of Jesus Christ for the propaganda of a brutally evil dictator. But that’s what the ROC and its leader Patriarch Kirill have done by genuflecting to the satanic persona of Vladimir Putin.

A Christian Church does not praise rapists, torturers and murderers for their despicable actions. But that’s what Patriarch Kirill did in the aftermath of the Bucha massacre on April 3 when he praised the armed forces for “feats” of service, saying Russia is “peaceful”.

And that’s not all.

He has justified Russia's attack on Ukraine, claiming there is an ongoing 8-year “genocide” of Russian speakers by Ukraine. He has declared that Russia has the right to use force against Ukraine. He has called this blatant act of aggression a holy war and said that those Russians who die in battle against Ukraine will find their reward in heaven.

Since the beginning of the war Russia has been using the Ukrainian Orthodox Church of the Moscow Patriarchate (UOC-MP) to provide cover for a network of clandestine agents trying to undermine Ukraine from within. As of October, 33 priests had been arrested for funneling information to Moscow’s forces.

Ukraine’s security services have found “literature that denies the existence of the Ukrainian people, its language, as well as the very right of Ukraine to statehood,” and videos have emerged of Orthodox priests chanting pro-Russian slogans.

But frankly that is nothing new. The ROC has always been the willing agent of Russian imperialism since the tsarist days.

In 1686 Russian regent Sophia Alekseyevna pressured the Patriarch of Constantinople who was under Ottoman Turkish captivity into transferring the Orthodox Church of Kyiv and all Rus’ from the jurisdiction of Constantinople to the Patriarch of Moscow, established a century prior to that. The legality of this step is questioned to this day along with the fact that the transfer was accompanied by graft and bribery, which in church affairs amounts to an ecclesiastical crime.

Under the Soviet regime it was the only church allowed to practice in the atheist state. In order to do so, it had to place itself under the authority of the KGB. Konstantin Kharchev, former chairman of the Soviet Council on Religious Affairs, explained: “Not a single candidate for the office of bishop or any other high-ranking office, much less a member of the Holy Synod, went through without confirmation by the Central Committee of the CPSU (Communist Party of the Soviet Union) and the KGB”. KGB agents masquerading as priests would violate the sanctity of the confessional to identify political dissidents.

Even Bartholomew, the Ecumenical Patriarch of Constantinople has denounced the ROC. Speaking at the “World Policy Conference – For a Reasonably Open World” on December 12, he condemned the support the Russian Orthodox Church offers to President Putin over the invasion of Ukraine.

“During the Soviet Union, religion was marginalized and oppressed. Communist ideology had occupied the terrain attributed to the screen to a religion exploited by the Tsarist Empire. After its fall, the faith was again used for ideological purposes. The Russian Orthodox Church has sided with the regime of President Vladimir Putin, especially since the election of His Beatitude Patriarch Kirill in 2009. It actively participates in the promotion of the ideology of Rousskii Mir, or the Russian world, according to which language and religion make it possible to define a coherent whole encompassing Russia, Ukraine, Belarus as well as the other territories of the former Soviet Union and the diaspora. Moscow (both political power and religious power) would constitute the centre of this world, whose mission would be to combat the decadent values of the West. This ideology constitutes an instrument of legitimization of Russian expansionism and the basis of its Eurasian strategy,” he stated.

On paper, the UOC-MP remains the largest church in Ukraine with about 12,000 parishes, but polls indicate it now receives the support of only 4 percent of the population. Only 13 percent of Ukrainian citizens of Russian ethnicity support the church. According to a poll conducted across Ukraine by the Kyiv International Institute of Sociology (KIIS) on December 4-27, 54% of Ukrainians believe that the UOC-MP should be completely banned in Ukraine. Another 24% are in favor of a somewhat ‘softer’ approach, which does not provide for a full ban, but lays down the establishment of government control and supervision.

Freedom of Religion is a sacred right in any democracy. But when a foreign state directs and controls every aspect of an imperial enterprise disguised as a traditional religion — the sole purpose of which is to aid and abet the military conquest and physical annihilation of an independent, sovereign and democratic state — then that foreign enterprise forfeits any and all rights to protection under the laws of that independent, sovereign and democratic state. Indeed, in such circumstances, the democratic state’s right to self-preservation, not to mention its moral obligation to defend its citizens from harm, compel it to use every legal instrument at its disposal to neutralize –- if not completely eliminate — any such threat to its existence.

Let there be no mistake about the true nature and objectives of the Russian Orthodox Church in Ukraine. It is wholly controlled and directed by the Kremlin for the sole purpose of destroying a free and democratic Ukraine and bringing back into the waiting arms of Mother Russia whatever remains of the country after its destruction. This task is being undertaken with the enthusiastic assistance of Putin’s minions and accomplices in the ROC leadership starting with Patriarch Kirill on down. The ROC has no moral right to continue operating in Ukraine. Its legal right to do so should be extinguished without further delay.