The Holy Mother has special meaning for Ukrainians

Within the Catholic Church, the month of May is celebrated as “Mary’s Month,” a time of year when special devotions are performed in honor of the Blessed Virgin Mary. This is especially true for Ukrainians as apparitions and interventions of the Mother of God have occurred throughout Ukrainian history. Kyivan Rus, in fact, was the first European state to be dedicated to the Mother of God. This was done by Prince Yaroslav the Wise in 1037.
One of the most notable feast days of the Holy Mother is October 14, known as the Feast of the Protective Veil or Sviato Pokrovy. On this date, we gratefully and prayerfully accept protection from the Blessed Virgin Mary, and Her intercession on our behalf before the Lord. On this occasion we also pay tribute to the heroes who fought for Ukraine’s freedom, the Kozaks, the Ukrainian Insurgent Army and others.

But there is also one key date that celebrates a Marian apparition on Ukrainian territory that falls in May – May 12 to be exact. That was the day the Virgin Mary appeared by the village church in Hrushiv, located 85 kilometres northwest of Lviv alongside the Polish border, to 22 people who happened to be mowing the fields at the time. The people of Hrushiv had planted a weeping willow tree at the site many years prior, commemorating an appearance of the Blessed Mother some 350 years earlier. Later, a spring suddenly appeared beneath the tree. During the severe cholera epidemic of 1855, a local person dreamed that the Virgin had instructed the residents to clear and reclaim the ancient spring and hold Mass. Not one cholera death was reported afterwards.

What was most significant about this apparition was the message the Virgin Mary passed on to the faithful: “There will be a war. Russia will become a godless country. Ukraine, as a nation, will suffer terribly for 80 years – and will have to live through the world wars, but it will be free afterwards.”

This prophecy proved to be most auspicious. Russia did indeed become a godless country following the Bolshevik Revolution of 1917. And the atheist leaders of the Kremlin inflicted the most horrible crimes against the people of Ukraine. There was the Holodomor, during which millions suffered a slow and agonizing death by starvation. Between the 1930s and 1950s, millions more were arrested, sentenced and deported to the hard labour camps of the Gulag to perish or endure long years of unrelenting misery. There were also purges, the destruction of the Ukrainian churches, both Orthodox and Catholic, the enormous devastation and suffering inflicted upon Ukraine during the second world war by both Nazi and Soviet armies, followed by new waves of persecution upon the annexation of Western Ukraine, and many more horrors including the Chornobyl disaster. And then, almost 80 years after the apparition, Ukraine became independent.

The 1914 apparition at Hrushiv also proved to be a prelude to the much-better known apparitions at Fatima, Portugal, when the Holy Mother appeared to three children in 1917. There too she warned of upcoming wars and a godless Russia.

In order to highlight the link between the apparitions at Hrushiv and Fatima and to emphasize the message of the Holy Mother to Eastern Christians, the Pilgrim Virgin Icon of Our Lady of Fatima was commissioned by the World Apostolate of Fatima’s Byzantine Division. The Icon was consecrated and blessed by Bishop Bohdan Danylo of the Ukrainian Catholic Eparchy of St. Josaphat in Parma, Ohio on March 4, 2018 – the Feast of the Exaltation of the Holy Cross. 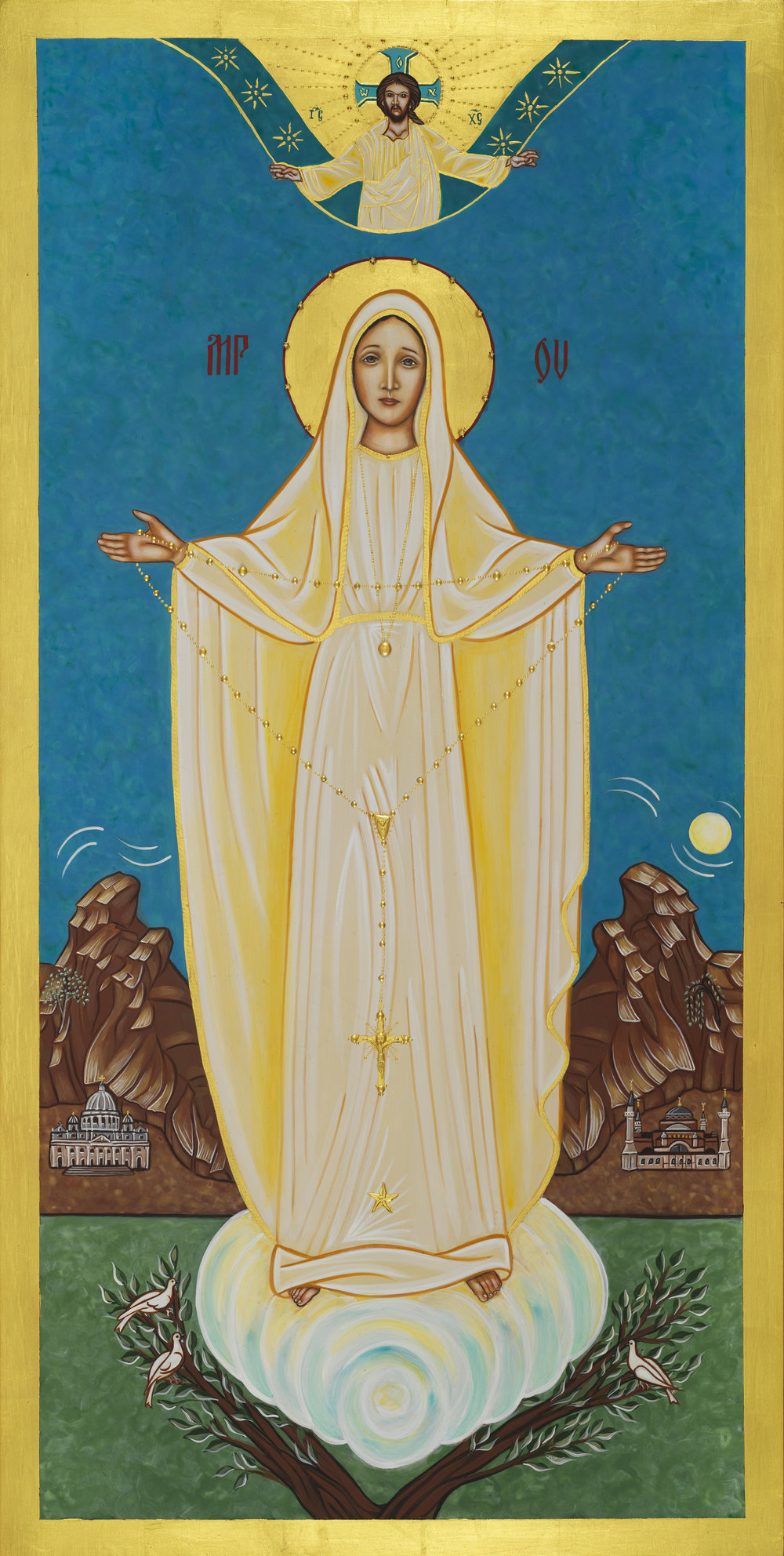 The Pilgrim Virgin icon of Fatima

According to an article by Mark Moran in Faith & Culture; The Journal of the Augustine Institute:

“The image of our Lady, as an icon, is the best way to connect Fatima and Eastern traditions. Icons have always in the East been the expression of choice among sacramentals. Unlike statues, icons are special paintings upon wood. They express ideas through a rich symbolic theology that does not adhere to the realism found in Western paintings, but instead adheres more to symbolism. The icon itself is a prayer offered by the iconologist that is written and offered through fasting.

“The Pilgrim Virgin Icon of Our Lady of Fatima shares the same deep spirituality and common iconic themes. Written by Vivian Imbrulia, the icon captures many spiritual themes of Fatima, as well as being inspired and based off the International Pilgrim Virgin Statue. In this way, Imbrulia captured many of the expressions found in the famous and miraculous statue and transferred them into the face of the Icon itself.”

Seventy-three years after the 1914 apparition, the Mother of God once again appeared at Hrushiv. On April 26, 1987 – exactly one year after the Chornobyl disaster — a bright light covered the church of the Holy Trinity in Hrushiv, and the Virgin Mary appeared over the cupola. A television program even recorded part of this light phenomenon.

Soon hundreds, then thousands came from all over the USSR to view these apparitions which continued every day until August 15. It is estimated that over 500,000 witnessed these apparitions until they ended. The Soviet militia and KGB could not even begin to control the crowds. The message was a sequel to the earlier one:

“I have come on purpose to thank the Ukrainian people because you have suffered most for the Church of Christ in the last 70 years. I have come to comfort you and to tell you that your suffering will soon come to an end. Ukraine will become an independent state.”
And once again, the Holy Mother warned of the dangers coming from Russia and asked people to pray for that country.

“Oppression and wars continue to occupy the minds and hearts of many people. Russia, despite everything, continues to deny my Son. Russia rejects real life and continues to live in darkness. If there is not a return to Christianity in Russia, there will be a Third World War; the whole world will face ruin.”

While Christianity has returned to Russia in theory, in practice it is through a Church which follows the dictates of a brutal regime, rather than the teachings of Jesus Christ. It is also a country that continues to oppress its own people and invade it neighbours.

So, during the month of May, venerate our Holy Mother and pray that Russia may yet become a civilized country that respects the independence and sovereignty of its neighbours and respects the word of God.