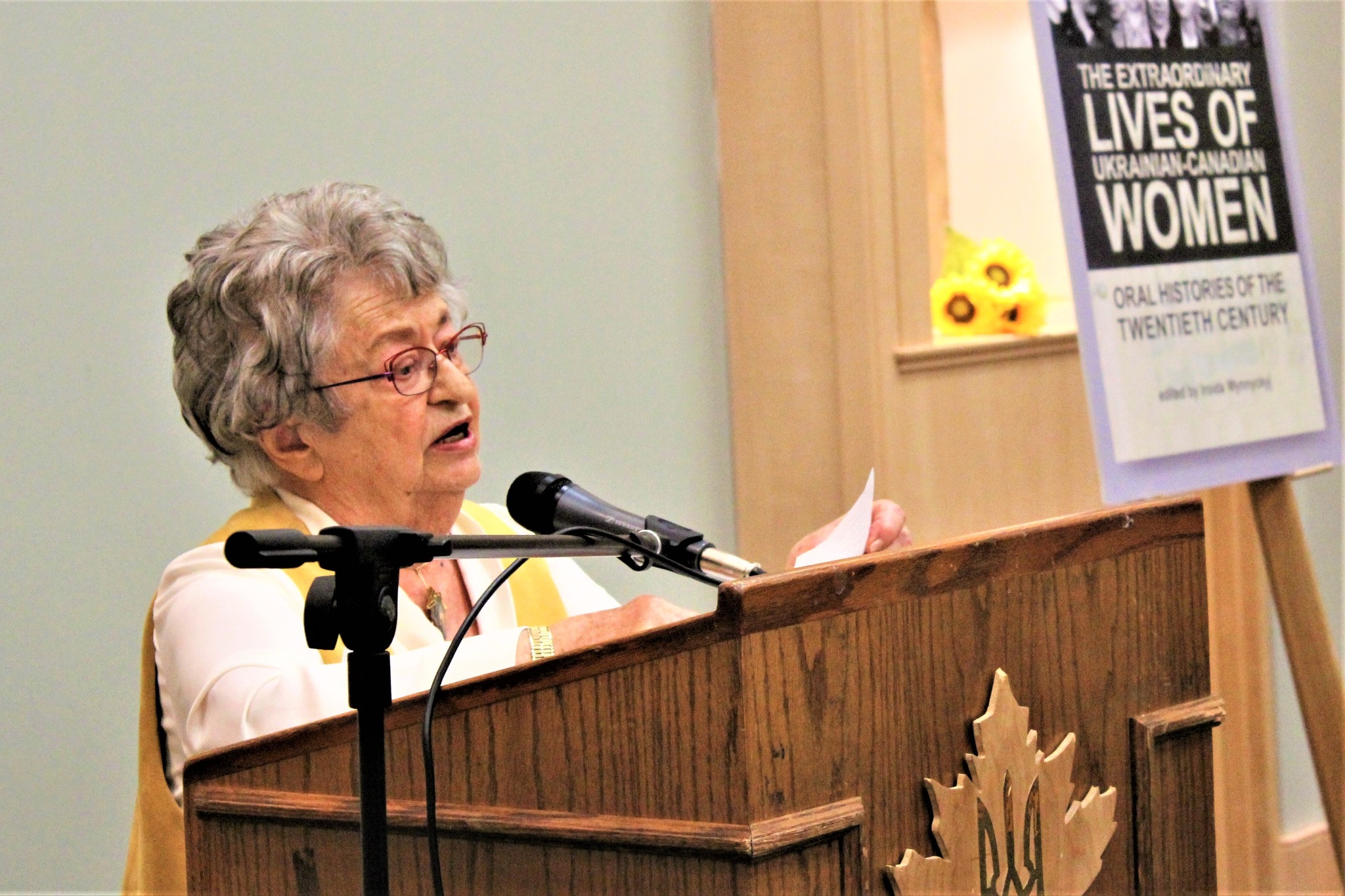 “This book is really phenomenal”, “it’s quite riveting”, “an eye opening lovely intimate account of what it was like to live in those challenging times”, “I cried a few times when I read the book”. These are just a few praises that Iroida Wynnyckyj’s book The Extraordinary Lives of Ukrainian-Canadian Women received at its launch on September 29 at the Ukrainian National Federation – Toronto Branch’s Hall in Etobicoke, ON.

The book depicts life stories of ten Ukrainian Canadian women who survived the turbulent events of the 20th-century Europe, stayed in displaced persons camps known as DP camps in post-war allied-occupied Germany or Austria and then immigrated to Canada. Once in Canada, they became active in the life and organizations of the Ukrainian emigre community. 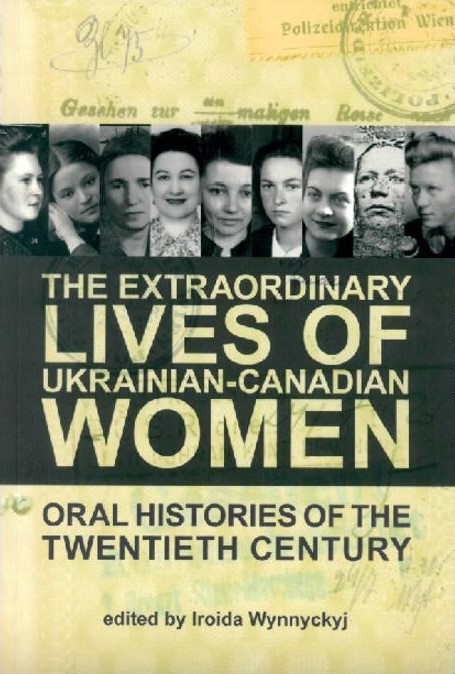 The Extraordinary Lives of Ukrainian-Canadian Women is a shorter, English-language version of the Ukrainian language book The Extraordinary Lives of Ordinary Women published in 2013 in Lviv, Ukraine. For the original book, Iroida Wynnyckyj conducted 250 interviews over the span of several decades. For that original book, sixty interviews were selected for analysis while twenty-one were published in their entirety. The new book contains interviews with the select ten women who have connection with Canada.

Many speakers at the book launch spoke about the importance of the English version of the account of Ukrainian Canadian women’s stories.

Dr. Natalia Khanenko-Friesen, Director of Canadian Institute of Ukrainian Studies (CIUS), said that the experience of Ukrainian Canadian women from “the greatest generation” (generally defined as people born between 1901 and 1927) is otherwise not covered in the global historical studies. At the same time, these women’s stories have an immense value for the scholarly studies, she said. 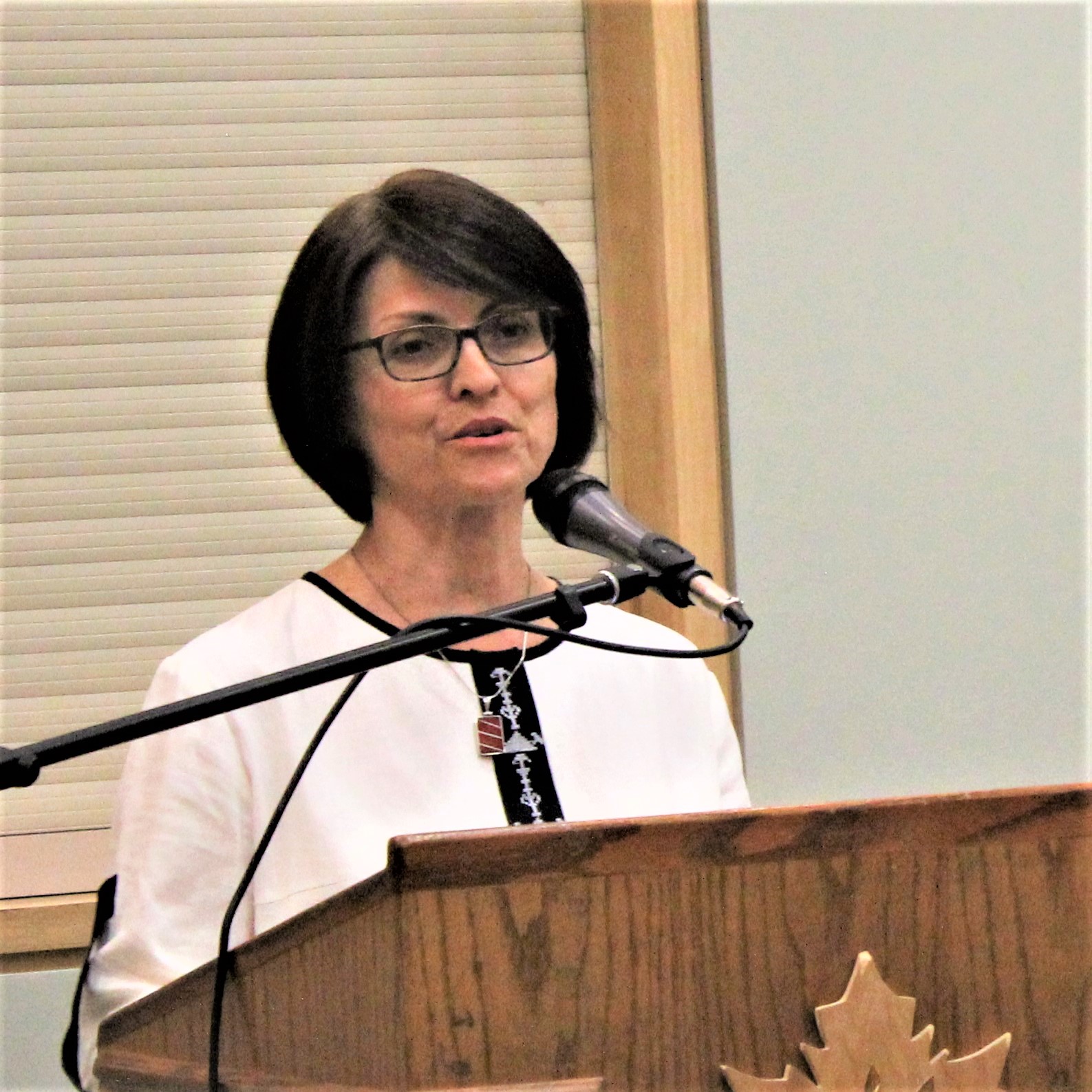 Dr. Natalia Khanenko-Friesen speaks at the launch of The Extraordinary Lives of Ukrainian-Canadian Women

Khanenko-Friesen noted that this generation of Ukrainian women, while having been subjected to the wars and economic hardship just like many other people in those times, were also pursuing their lives on a periphery of various empires or other states that did not recognize Ukrainians as a nation. These women had to defend and assert their own national identity from the very young age, their peripheral position in their societies determined their emancipation. This makes their experience unique and worth considering for scholars of gender studies and for scholars of world history, she said.

Both Khanenko-Friesen and Frank Sysyn, director of the Peter Jacyk Centre for Ukrainian Historical Research at CIUS, spoke about the value of the book’s conversational nature.

Khanenko-Friesen said that because Iroida Wynnyckyj knew very well and had a very good rapport with the people she talked to, they shared the details of such immensity that would not have been possible to write down if it would be memoir writing.

Sysyn told NP-UN that the oral format of the interviews, when the interviewed women were freer in their expression, now allows the researchers to have a way of understanding of the mentality of that generation which was not fully known before. “What we often forget is how quickly mentalities disappear, knowledge disappears. And this book gives us the ability to capture a certain moment in time”, he said.

The other aspect of this book is that reading one interview gives one some understanding of what it was like to live in those times, but having an opportunity to read ten stories generates in the reader the broad understanding of a larger picture, added Khanenko-Friesen.

Iroida Wynnyckyj, who interviewed her mother Anastasiia Lebid’ for the book, and Oksana Sokolyk, whose mother Liudmyla Bryzhun’s story opens the book, spoke about the value the book carries for them personally. It turns out that both Wynnyckyj and Sokolyk found from the interviews some important details about their mothers’ lives which they did not know otherwise.

From the interview, Wynnyckyj found about her mother’s experiences during her family’s flight from Volyn to the small town of Plysky (now Nizhyn Raion, Chernihiv oblast) during the First World War.

In her address at the launch, Sokolyk said that she did not know about her mother’s involvement in the Ukrainian community in the Siberian city of Tomsk in 1917.

Frank Sysyn spoke of the “tremendous” value of the historical accounts in the book, such as Mariia Logush’s information about her involvement in the Ukrainian radio station in Prague during the Karpatska Ukraina’s time: “CUIS Press just published volumes of Czech documents on Karpatska Ukraina but here we have someone who was actually in Prague at the Ukrainian broadcasting at the time these events were going on and who could tell us what was going on behind the scenes”, he said.

Iryna Revutsky, Ukrainian Canadian Research and Documentation Centre’s President and Chair said that the book also has the added benefit of being immensely readable while providing the reader with an insightful personal snapshot of Ukrainian and Ukrainian Canadian history from a woman’s perspective.

The Extraordinary Lives of Ukrainian-Canadian Women is co-published by Canadian Institute of Ukrainian Studies Press and Ukrainian Canadian Research and Documentation Centre.

The book can be purchased at UCRDC at 620 Spadina Ave. Toronto, ON M5S 2H4 Canada. The proceeds from the sale of the book will be given to the UCRDC.