The Crimean Platform: A step in the right direction to de-occupy Crimea 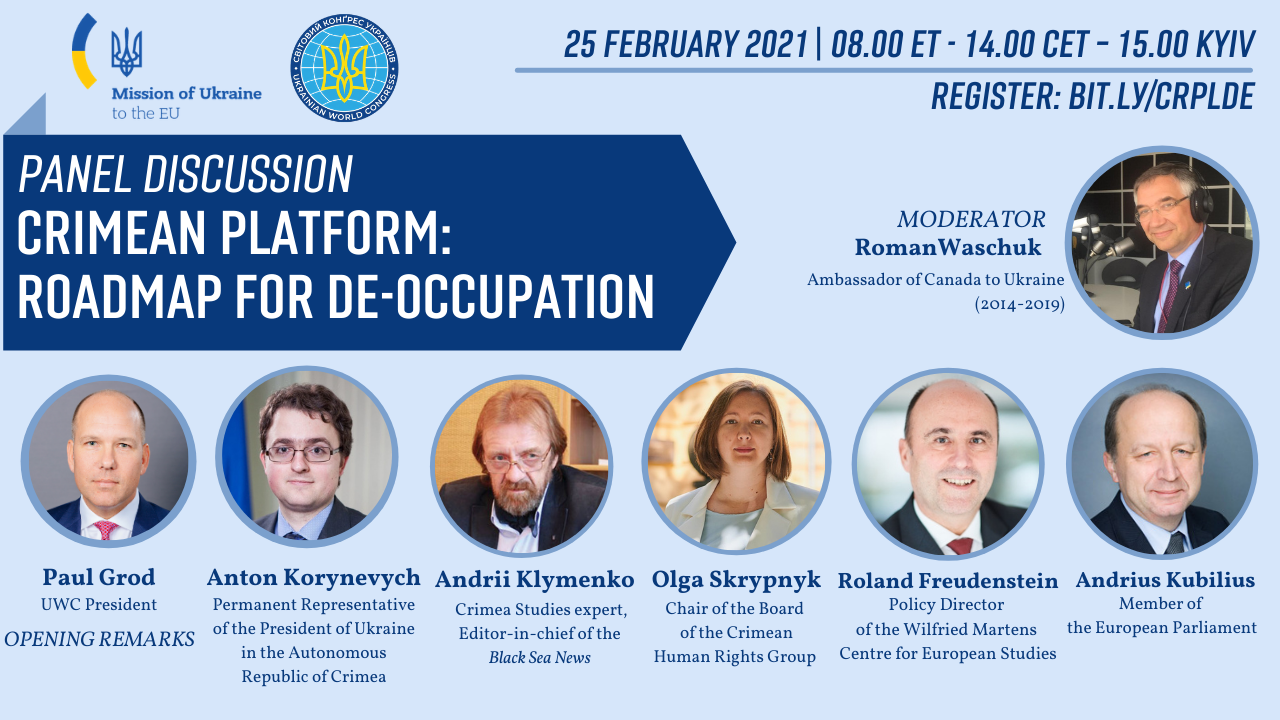 Educators and leaders from around the world highlighted the efforts and next steps surrounding the Crimean Platform and the Russian occupation of the region during a panel discussion led by the Mission of Ukraine to the EU and the Ukrainian World Congress (UWC) on Feb. 25.

According to Tamila Tasheva, deputy permanent representative of the president of Ukraine in the Autonomous Republic of Crimea, the platform has been an ongoing initiative as part of the country’s strategy for the de-occupation of Crimea by Russia.

Tasheva added that the initiative is expected to work on several levels composed of foreign heads of states, foreign ministers and defence ministers, inter-parliamentary members and experts. A “Crimean Summit” is expected to be held in Kyiv on August 23 — the day before the 30th anniversary of Ukraine’s independence.

The panel — which took place in February, marking the seventh anniversary of the Russian occupation of Crimea — was moderated by Roman Waschuk, the chair of the UWC foreign policy council and the former ambassador of Canada to Ukraine.

Along with Tasheva, the panel’s guest speakers included member of the European Parliament Andrius Kubilius and Roland Freudenstein, the policy director of the Wilfried Martens Centre for European Studies. Crimea studies expert and editor-in-chief of the Black Sea News Andriy Klymenko and Olga Skrypnyk, the chair of the Board of the Crimean Human Rights Group, also attended as guest speakers.

In his opening remarks, president of the UWC Paul Grod stressed the importance of taking action against the Russian annexation of Crimea. He suggested imposing sanctions on senior Russian officials and business interests, having global parliaments declare the non-recognition of Russia’s illegal occupation of Crimea and putting an end to rewarding Russia for bad behaviour; highlighting the country’s re-engagement in the parliamentary assembly of the council of Europe, as well as the continued development of the Nord Stream 2 pipeline.

“The international community cannot turn a blind eye on this threat to security in the whole region and a blatant violation of international law and order,” Grod said. “We will never let the world forget that Crimea is Ukraine.”

Tasheva explained that although the initiative has been in the works for seven years, it wasn’t until last year that Ukrainian President Volodymyr Zelensky realized the platform should be put in place as a way to allow for open communication between the government and its citizens.

“The president announced this platform because he sees it as an institution that will help make decisions and propositions for national leaders and in turn, the platform will help [Ukraine] work with its international partners…based from the Kyiv office,” Tasheva said.
On behalf of the European Parliament, Kubilius said the collective supports the Crimean Platform “in all possible means” and will continue to do so.

“We understand very well how much Crimean people are suffering,” Kubilius said. “Unfortunately, there are still no effective [instructions] for how to help and how to stop Russian occupation authorities from causing human rights violations.”

Freudenstein agreed with Kubulius, saying, “The roadmap for de-occupation of Crimea leads via a resilient democracy in the European Union; a stable democracy in rule of law and democratic resilience in Ukraine and the other countries, the Eastern neighbourhood of the European Union.” He added that the roadmap also leads via a democratic Russia, though this is expected to take a long time.

“As long as [Russian President Vladimir] Putin is in power, I cannot see a peaceful de-occupation of Crimea happening,” Freudenstein said.

Freudenstein went on to say that democracy in Western Russia should be the next big project for both the European Union and transatlantic relations, citing the overarching issue of democracy versus authoritarianism found in many intergovernmental relations.
Skrypnyk looked at how Crimean peoples’ human rights are being abused by the Russian authorities. She said, “Russia’s impunity for crimes creates conditions for new human rights violations and continued suffering of Crimeans.”

According to Skrypnyk, a big issue exists around the torture of Crimeans by Russian authorities, however, no one is punished or held accountable.

Skrypnyk also said the COVID-19 pandemic has posed a new challenge; Russian authorities are using the pandemic as an excuse to keep Crimeans in the occupied territory, only allowing limited reasons to leave. Additionally, Russian authorities have blocked external media access for Crimeans which makes it difficult for them to learn more about the pandemic, as well as infringes on their right to freedom of expression.

“Now, only Russian and pro-Russian media can walk freely in Crimea,” she said, adding that even though “Crimea is Ukraine” is an international position, the expression is a crime in Crimea.

Another dangerous trend that is seen in Crimea is the militarization of the civilian population. According to Skrypnyk, Russia has held 12 draft campaigns with 28,000 Crimean men to enlist in the Russian army.

“Many young people, like my brother, leave Crimea for mainland Ukraine in order to avoid being drafted in the Russian armed forces,” she said.

Klymenko explained that over the past seven years, he and his paper have been covering many of the issues discussed during the panel, including the militarization of Crimea as well as other challenges imposed by the occupation of the region.

However, he said he didn’t necessarily agree with Tasheva or Freudenstein. Instead, he believes the Crimean Platform is not about human rights or the rights of the Crimean people; above all, it is the act of freeing and returning the occupied territories.

“We need to find mechanisms in order to force Russia out of Crimea and Donbas,” Klymenko said, adding, “We must create a systemic algorithm that will put a complex pressure on the Russian Federation.”

Klymenko also spoke about the immigration of Russians into the Crimean territory. In a couple of decades, Russians living in Crimea will outnumber the Ukrainians who recall an independent Ukraine that included Crimea.

He went on to stress the importance of implementing a concrete non-recognition policy and keeping track of countries that do not accept the occupation of Crimea by Russia. Klymenko added that new, targeted international sanctions should be put in place in Crimea, as well as a diplomatic military blockade to prevent Russian military ships from docking onto shores of countries that do not support the occupation of Crimea.

To close the virtual panel discussion, Grod acknowledged the variety of ideas and proposals surrounding the Crimean platform, as well as the next steps that need to be taken, including “a clear and unequivocal non-recognition policy, red lines for Russia and…ensuring the international community…understand[s] the real situation in Crimea.”
“This month is critical in terms of ensuring that…we put concrete actions to the international community in helping ensure that Crimea is once again Ukraine,” said Grod.