Ukrainian Canadian life is diverse and complex, and many of its underreported issues and personalities deserve to be brought to our attention and to wider communities. This is the focus of a unique radio program that has been on the airwaves of 18 radio stations across Canada as well as streaming platforms since March 2016. As the show Nasha Kasha is wrapping up in February, NP-UN spoke to Stefan Andrusiak, a career journalist and a community activist, about his show’s origins and experiences, and about his reflections on his life in the media and the community.

As a now-retired career journalist and volunteer with a decades-long track record at CBC and CTV, Andrusiak wanted to contribute his skills to painting a portrait of the Ukrainian Canadian community without “repeating what everybody else is already doing very competently”.

To accomplish this, Andrusiak turned to radio as a practical means of telling original stories that others may not notice. People feel more comfortable without a camera pointed at them. He said: “When I approach people, they say to me, ‘Oh, no, I’m not important enough for a story’. But that’s what Nasha Kasha is – it presents people and finds little stories that demonstrate what they’re going through in life, but also puts it into context as to what Ukrainians as a whole are going through”.

Nasha Kasha is like life, Andrusiak told NP-UN: “The program starts with the premise that Ukrainian life is warm, it embraces you, it restores you like a warm bowl of kasha does. But it’s also a little bit mixed up, it’s not perfect”.

Andrusiak spoke warmly and at length about the heroes of his shows, and it felt like he could talk for hours. He remembered the subjects of the first-ever Nasha Kasha episode, Maksym Sviezhentsev and Natalia Diomina, who were at the time doctoral students at Western University. Both were from cities in Ukraine that were experiencing hardships. Natalia and Maksym told him about their families, their plans, and the music they liked. Diomina would return to her hometown of Mariupol. Sviezhentsev, who grew up in Sevastopol, did complete his doctorate in June of 2020, but he could only find work as a roofer. He was able to bring his wife to Canada. They had a son who is now two. But life would take them back to Ukraine, where today he teaches and works for an NGO: CrimeaSOS.

Andrusiak said, “Nasha Kasha is about life, things change and I look back at these two very first people I talked to. They’re pursuing their lives, and I had a chance to get to know them”.

Many of the interviewees doubted that their stories would be interesting, said Andrusiak. But everyone can teach me and my listeners something of value, and once they opened up, listeners found them fascinating.

Like the story of Richard Zurawski of Halifax, who discovered late in life that he was Jewish with roots in Ukraine. He thought he was of Polish and German heritage. Then one day, a neighbour told his father that Richard with other boys had called Jewish child names. His father gently asked Richard never to do that again. ‘They are our people,’ he said. The revelation eventually would prompt Richard and his mother to visit Lviv after his father died to find his father’s boyhood home.

Andrusiak journeyed to Prince Edward Island and spoke to Orysia Dawydiak, who worked at the Veterinary school at UPEI. She is also an award-winning author. “I lived in Prince Edward Island for nearly a decade,” said Andrusiak, “and I used to joke that there were five Ukrainians in all of PEI, and that they all live in my house”. But now, there are many, many more there and throughout the Atlantic provinces.

Andrusiak spoke about Viktor Khalack, an astronomy professor who with his wife Julia had emigrated from Ukraine to New Brunswick. Prof Khalack had to learn French to teach at l’Université de Moncton, and he did just that. They are also involved in a thriving small Ukrainian community in that province.

Andrusiak travelled to the Internment camp at Spirit Lake in Quebec’s Abitibi region and interviewed James Slobodian, who, because of his close ties to the French-Canadian community, was able to successfully lobby politicians to restore the internment campsite near Amos as a historic site. That same episode introduced listeners to Yurij and Zoryana Luhovy, who, as young filmmakers in the mid-1970s, first revealed the location of this internment camp in northern Quebec.

Another episode showcased the relationships between Ukrainians and the Irish. Andrusiak’s best friend in Montreal is married to someone who is proudly Irish, and he explored her willingness to integrate and to learn Ukrainian: “Through her eyes, (Lori Zacharewycz) told me about the Ukrainian community that she lives in now”.

While in Montreal, Andrusiak also caught up with Jerry Gudzio, who once played guitar for the rock star Luba and for the Ukrainian band Syny Stepiv. Mr. Gudzio introduced Nasha Kasha listeners to the Siamsa Montreal School of Irish Music, which holds classes at a city pub called Hurleys.

Nasha Kasha has also presented many community leaders. Andrusiak called journalism “a backstage pass to life”. He said, “Where else can you ring the doorbell of the Vladyka Yurij (Kalistchuk) of Ukrainian Orthodox Church in Winnipeg? (Of course, I didn’t just show up, I called in advance) And Vladyka sits me down, and for the next hour talks about loving music as a boy, and about growing up in Lachine. Then of course we talk about the important changes in the Church. It was at a time when there was a little bit of uncertainty, but also great excitement because that was just before the Ukrainian Orthodox Church received the Tomos”.

Andrusiak brands his program as “stories for everyone about Ukrainian life”. One episode was dedicated to the Holodomor and why the word itself is not in any English language dictionary. “We’ve campaigned hard for it and here we are still waiting for English language dictionaries to include this term. That’s something that has to be said. And who needs to hear it? Not ourselves, we already know it. It’s the non-Ukrainian speaking community”, said Andrusiak.

He said that he didn’t want to overly romanticize the topic but mentioned that he played “radio station” when he was a child growing up in Montreal and that it has always been his second nature to tell stories. “I was the kid who would get into trouble with teachers for telling jokes in class. Even though I knew back then I would get a slap on the back of the head. … There was a bit of performer in me. I guess I was lucky enough to work in a career that I love”.

It turns out that Andrusiak’s luck materialized in a big way many years ago, on a Friday night at a Carleton University student pub when his friends, journalism students Nadia Rudyk and Marco Levytsky (currently NP-UN’s Chief of Western Bureau), generously shared information with him that CTV was coming to their School of Journalism to recruit. Andrusiak was in graduate studies in International Affairs at the time. He got the interview and was the only one CTV hired at Carleton that year.

He told NP-UN: “My friends did something that was very selfless, that only good friends would do. They knew that I would be their competition, and they did it anyway because they wanted to give me a chance. Can you imagine coming out of graduate school and you’re in Toronto, and you’re working with Lloyd Robertson, Keith Morrison, and some of the best journalists in the country. And so my dream came true”.

What is next for Stefan Andrusiak, who explained that it’s time for new beginnings?

“I’m going to write, I am not sure exactly what, but I think I have a book in me.” Then he laughs: “I think it’s important to take a bow, to leave the stage before people realize you’re becoming ridiculous.”

And there was something Stefan Andrusiak wanted to add. He would like the Ukrainian media to continue speaking to people who may not be on the inside of Ukrainian life: “To not only ask who, what, when, where and how, but also why not?”

Andrusiak was the President of Ukrainian Canadian Congress’ Ontario Council when, in 2014, UCC became almost entirely focused on Ukraine, he said, while he wanted to find some way to reach out to communities across Canada. “And that became Nasha Kasha. I don’t dispute that at the time Ukraine needed our full attention. It’s just that it was a surprise that we couldn’t try to do both. There’s been a course correction and Ukrainian Canadian Congress is now reaching out and doing very good work with our communities and with people who may not be fully engaged in the Ukrainian community”.

Stefan Andrusiak serves on the New Pathway – Ukrainian News Board of Directors. He is the reporter and host of Nasha Kasha – a weekly radio show about Ukrainian life that can be heard now and throughout the summer of 2022 at https://nashakasha.libsyn.com/ 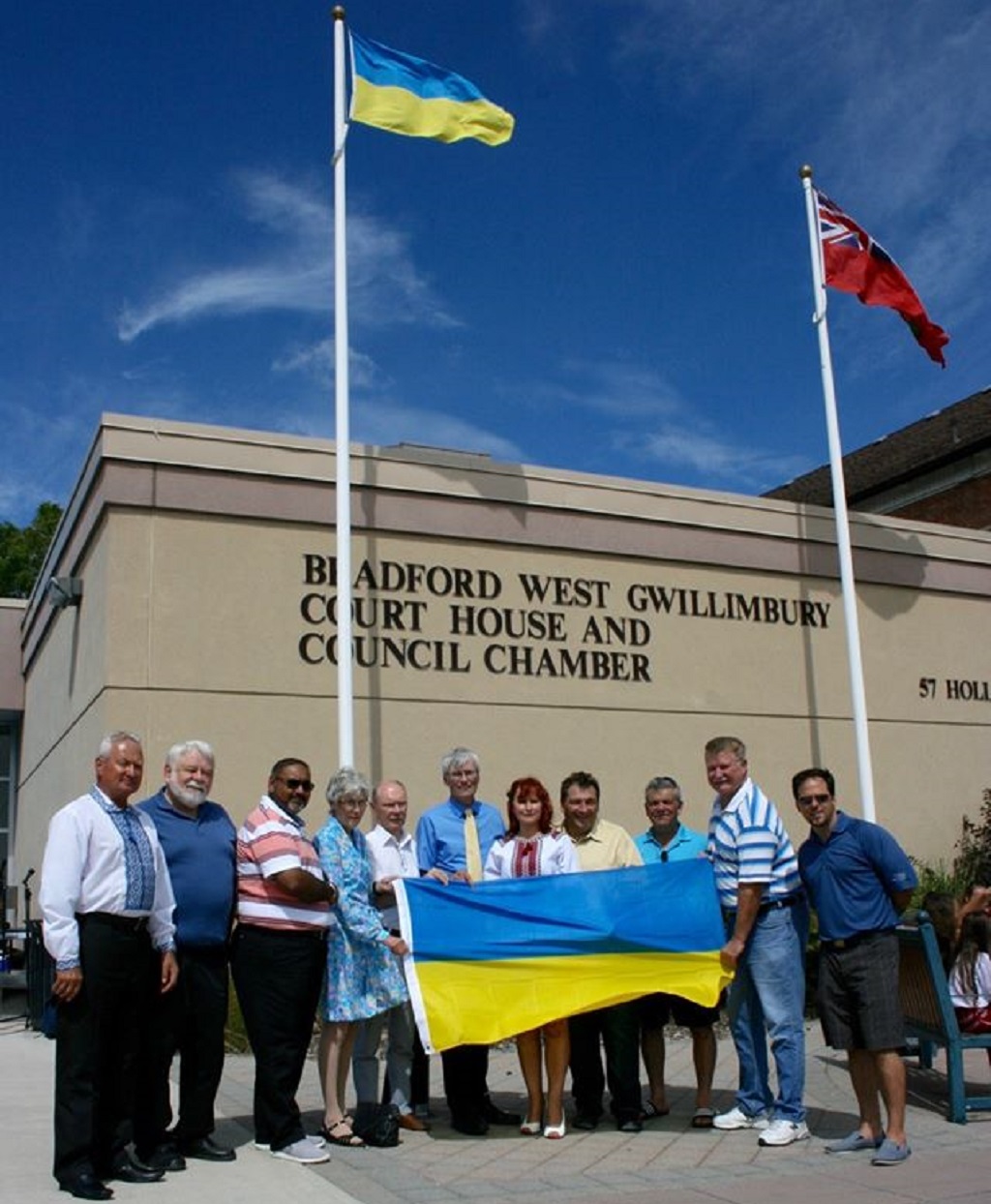