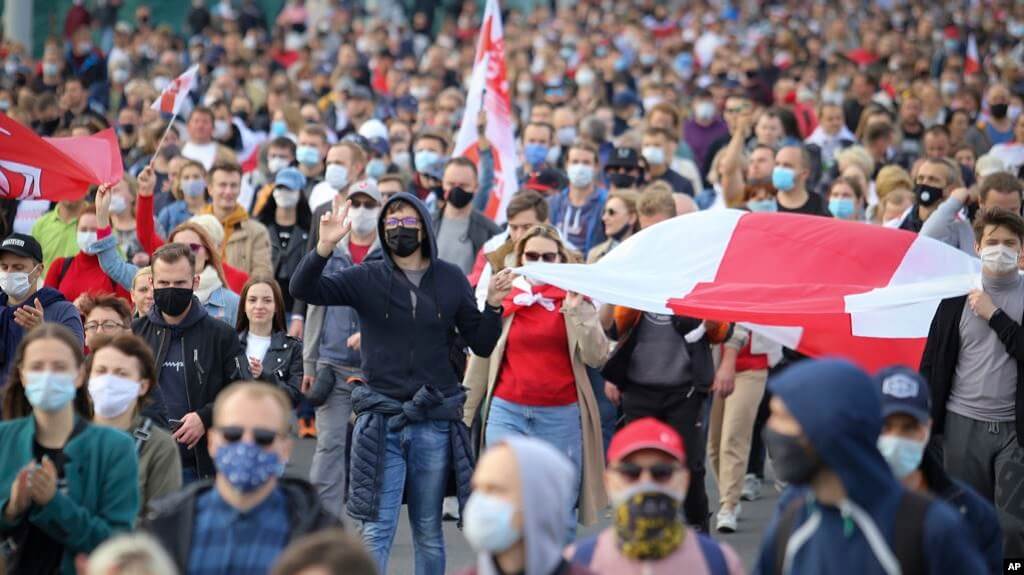 Their struggle is our struggle and we must offer our support

The massive protests that erupted in Belarus following the fraudulent August 9 presidential elections have galvanized the Belarusian community in Canada. In some parts of the country they served to strengthen existing institutions, while in others they brought together people who didn’t know each other previously to form associations where none had existed before.

Edmonton is one such case. Anastacia Morozova who has been one of the key figures in organizing the protests in that city says that Belarusians abroad had been very disconnected until recently. This was partly due to their small number and partly because their main language of communication was Russian, which prompted them to join Russian-speaking online groups and chats.

But the August election changed all that. They first connected through a Russian Facebook group and held a couple of meetings prior to the election. Then came the actual day of the election.

“We as the other millions of Belarusians joined the telegram channel Nexta (reads Nehta which means ‘somebody’ in Belarusian) to watch the results of elections in real time. It was the only source of information abroad and in Belarus where the internet was totally shut down. The havoc began. We could not eat, sleep or lead our normal lives anymore. It was terrifying to see the catastrophe unfolding in our blue-eyed Belarus. I felt like the hearts of millions of Belarusians started to beat in the same rhythm, even if it was the rhythm of pain and agony. Every one of us was shocked and paralyzed. The next thing I knew I was calling another concerned individual and telling her we need to gather a meeting. When? Tomorrow! After my full-time shift at work with trembling hands and eyes full of tears I wrote a speech – things I wanted to tell the world and break the information vacuum. That meeting brought together over 80 people,” recalls Morozova.

The next day she was contacted by Alena Liavonchanka, head of the Belarusian Canadian Alliance (BCA), who suggested they work together. She also got in touch with another interested person in Vancouver and they started coordinating actions through social media.

“Within this initiative, we began to plan Canada-wide events to support Belarus and increase awareness of its tragedy, work on petitions and communicate with the Canadian government, coordinate liaison with the Belarusian diasporas in other parts of the world, and work on many other current projects that help people in Belarus,” she noted.

The first Belarusians arrived in Canada in 1905 but it wasn’t until 1948 that the BCA was founded by post-war political refugees. Like the Ukrainian Displaced Persons (DPs), these Belarusians came from the western part of the country which had been under Polish rule prior to the war. Very few refugees from the eastern part of the country managed to reach the west after the war because, under the Yalta Agreement, refugees from the pre-war boundaries of the USSR were repatriated to the Soviet Union and sent right to the Gulags. As the refugees who made it to Canada had not been exposed to Russification, they maintained the Belarusian language and even published newspapers in their own language at that time. Unlike the Ukrainian community, however, their children did not maintain the ties and the BCA now consists mostly of immigrants who arrived after the collapse of the USSR and whose principal language of communication is Russian. Nevertheless, Belarusian is used exclusively for BCA events, leadership meetings, documentation and correspondence. And the BCA strives to expand upon this. “We sincerely hope that the Belarusian language will gradually gain the lead in the hearts and minds of our people. This is one of the goals of the BCA – to promote the Belarusian language,” explains Liavonchanka.

And the election was a major turning point in many other ways as well.

“There was an unprecedented line in front of the Belarus Embassy in Ottawa on the day of voting — all day,” adds Liavonchanka. “After the horrible events of the first protest week, the Canadian community was in shock, but then people actively engaged in political discussions, activism and community work. We were proud to be Belarusians, at last. Many volunteer groups in major Canadian cities are now organizing protests and helping families in need in Belarus. There is great collaboration between the BCA and volunteer initiatives. We provide guidance and tools for interacting with Canadian politicians.”

What has been happening within Belarus, the Belarusian community in Canada and the Belarusian Diaspora elsewhere, is indeed a growing phenomenon. It is as if all the frustrations that were suppressed during the years of Soviet and Lukashenka’s neo-Soviet repression, have suddenly erupted like a genie bursting out of a bottle. And once the genie’s out, there’s no way to put him back in.

Despite the fact there are no two nations that are closer together in terms of language and culture, we Ukrainian Canadians have known very little about our Belarusian brothers and sisters until just now. But what is happening has major ramifications for our community as well. Ukrainian Canadians and Belarusian Canadians are united in their desire for self determination, their desire to create prosperous and functioning democratic societies in our respective homelands and the desire to rend asunder the chains of Muscovite imperialist oppression. As we are a much larger, more powerful and much older community within Canada’s mosaic, this is an opportunity for us to lend a helping hand and offer our experience, support and community infrastructure for their use and benefit. Their struggle is our struggle and it is the struggle of all people desiring democracy, self-determination and freedom from oppression.