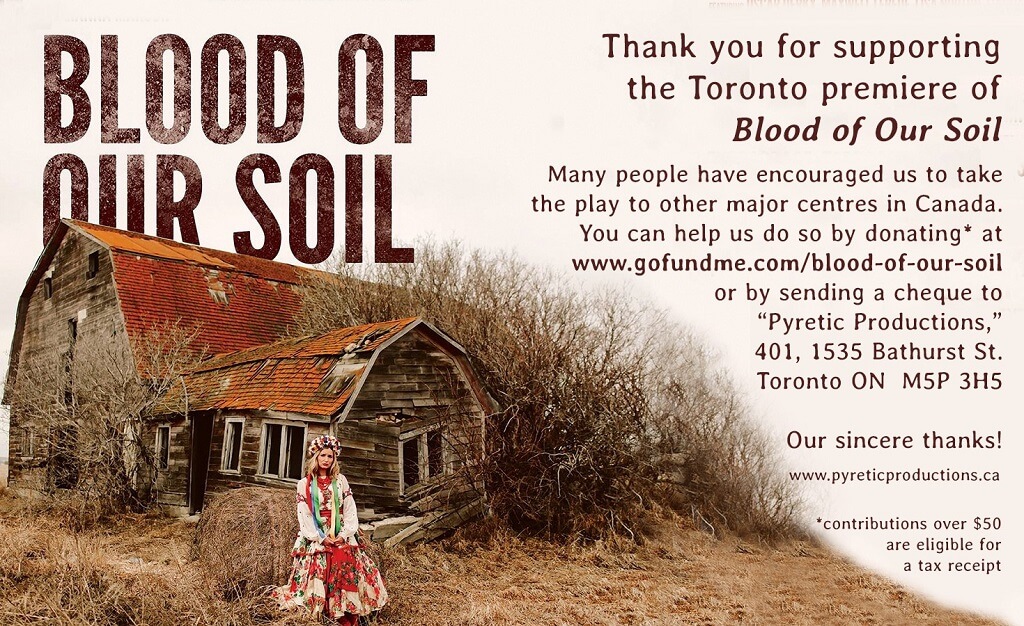 Toronto was treated to Pyretic Productions’ “Blood of Our Soil” from March 7-16 at the Tarragon Theatre, one of Canada’s major centres for contemporary work. The play was written by second-generation, Ukrainian Canadian Lianna Makuch and directed by Patrick Lundeen, with dramaturgy by Matthew MacKenzie, writer/director of the award-winning “Bears” which has just completed its second, successful Toronto run—this time at Factory Theatre.

“Blood of Our Soil” hit the stage at Tarragon Theatre with praise both from the Ukrainian and arts communities, garnering several enthusiastic reviews, including the Toronto Star “a remarkable job of creating a theatrical experience that ties together a heritage journey with thoughtful commentary on a place tragically caught up in cycles of oppression and violence” and leading online blog Mooney on Theatre “a quietly remarkable theatrical event…tightly written, beautifully designed and skillfully performed.”

In October 2017, the principals of Pyretic Productions travelled to war-torn Ukraine to conduct research and interviews for this project. The experience proved invaluable to the creation of the play. Two prior iterations in Edmonton in 2017 and 2018 led to the current 2019 hit, with “Blood of Our Soil” performing to full houses at Toronto’s Tarragon.

The play portrays both the historic and contemporary struggles of Ukrainians—the atrocities of Stalin, the horrors of Hitler, and the present-day, internationally condemned aggressions engendered by Putin.

“Blood of Our Soil” lays out the personal journey of the main character Hania, in Canada and Ukraine, while interspersing scenes of her Baba’s past and present. Hania reflects on fond memories of summers spent with her beloved Baba, now in a long-term care facility and tormented by an unrevealed “secret.” A chance discovery of Baba’s journal allows Hania to gain new insights into the truths of her grandmother’s experiences during the Holodomor in the 1930s and WWII.

As her Baba becomes increasingly consumed by news of the current war and her fears for the fate of her family, Hania feels compelled to go to Ukraine herself. She needs to gain a deeper understanding of her family history and to witness the consequences of the ongoing five-year war, manufactured by Russia-backed “separatists” in Eastern Ukraine—a war that has cost more than 10,000 casualties and millions of civilian displacements.

Hania is not prepared for what she discovers as she learns the harsh realities of people suffering Putin’s reprisals for the 2014 Kyiv Euromaiden “Revolution of Dignity.” The true stories of people caught in the heart of today’s conflict come to life as “Blood of Our Soil” gives voice to those whose lives have been forever changed by oppression and war.

Pyretic Productions initially presented “Blood of Our Soil” in Edmonton. The play gained high acclaim from the Ukrainian community, the arts community, and media, and was nominated for the coveted Sterling Awards of Best New Play and Independent Production.

“Blood of Our Soil” strikes a common emotional chord among audiences, not only for Ukrainian Canadians, but for people everywhere. In response to calls for further productions across Canada, Pyretic Productions is in the early stages of planning a national tour. They hope to bring the play to the major centres of Ottawa, Montreal, and Vancouver, as well as to Winnipeg, Saskatoon, Calgary and their hometown of Edmonton again.