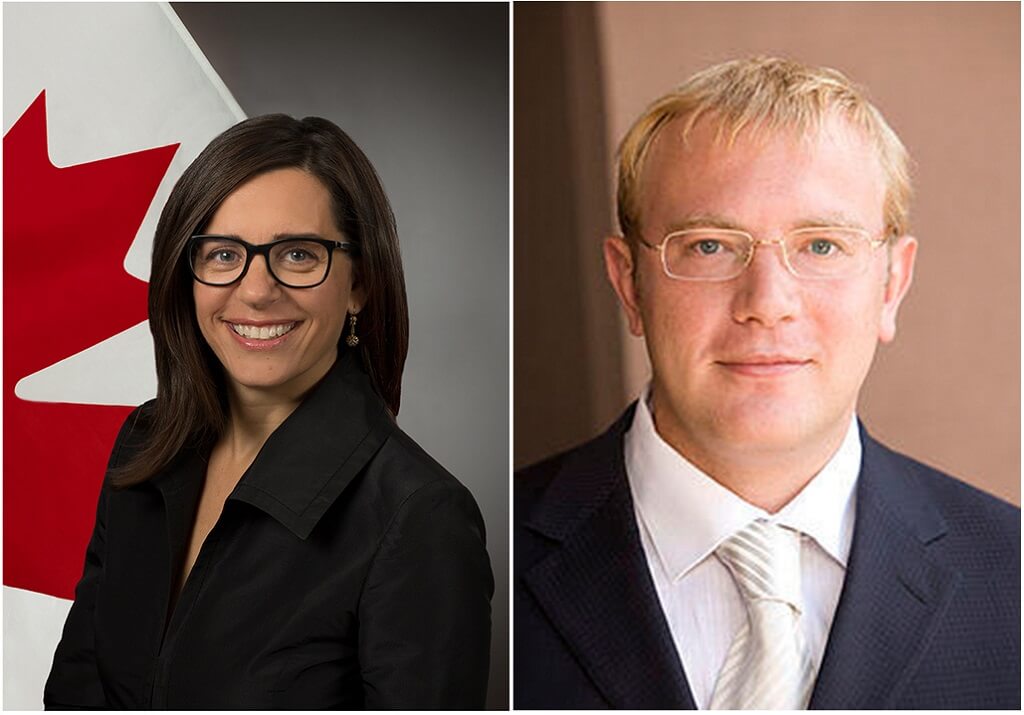 Now is not the time to ease sanctions on Russia, but to maintain and strengthen them, say Canadian and Ukrainian Ambassadors.

“We see how Russia is trying to use the (COVID-19) pandemic situation to convince some of our partners in the free world that this is the time to review sanctions,” said Ukraine’s Ambassador to Canada Andriy Shevchenko during a May 8 webinar, sponsored by the Canadian Institute of Ukrainian Studies at the University of Alberta, in which he was joined by Canada’s Ambassador to Ukraine, Larisa Galadza.

Instead, we should make the best use of these sanctions to put Russia on the right track.

“If there is a chance to get some transformational changes and a chance to make Russia change its behaviour this is the time,” he added, noting that Russia has been spreading disinformation about the pandemic in an effort to polarize society.

He was referring to aid the Russian Federation had earlier sent to European Union members hard-hit by the COVID-19 pandemic, Italy in particular.

But, as the Italian newspaper La Stampa pointed out, 80% of the aid sent March 7, labelled “From Russia With Love” was useless, and intended as a propaganda vehicle to get EU members to lift sanctions imposed upon Moscow for its 2014 annexation of Crimea and invasion of Donbas.

As well, an EU document, revealed by Reuters on March 18, documented 80 cases of Russian disinformation on the pandemic in the previous two months.

Galadza agreed with Shevchenko, stating that Canada’s position on sanctions is that these must be maintained and works with its allies to look for opportunities to strengthen them.

She added that Ukrainian officials she meets ask her to pass on a key message to Canada’s G7 colleagues, which is that they should not be tempted by Russia and lured by a false narrative.

“Do not be tricked by it and please maintain your sanctions on Russia,” she quoted them as saying.

Galadza added that she thinks the argument advanced by some diplomatic observers that Russian President Vladimir Putin is looking for a face-saving way to get out of Ukraine is not particularly compelling.

Responding to a question on how long Operation Unifier, under which Canadian Armed Forces personnel train Ukrainian soldiers in their fight against Russia, will be maintained, Galadza said 17,000 Ukrainian troops have been trained so far, and the mission has a mandate that lasts until 2022.

The operation, for which Canada normally deploys 200 CAF members on a rotating basis but that has been cut down to 60 during the pandemic, will be back at full capacity once mobility issues are resolved.

There are additional plans to develop such areas as tactical training, sustainable needs, some institutional capacity building, civilian policy capacity, and gender analysis, she said.

Shevchenko stated that Ukraine will need Operation Unifier for some time and we should think about what happens after 2022. He added that we can also discuss the scale of the operation. One area to consider is the Black Sea and how Operation Unifier could help Ukraine’s defence capabilities there.

CIUS Acting Director Jars Balan noted that the institute was honoured to help educate members of Canada’s Princess Patricia Battalion about Ukraine and its culture prior to their deployment and offered any future assistance.

Galadza said she was impressed by the deep knowledge CAF members had about Ukraine, adding that they credited the CIUS with preparing them.

She also devoted considerable attention to Canada’s role in assisting Ukraine’s NATO aspirations, both in her opening remarks and in the question and answer session.

Galadza stressed that one thing Ukrainians have to understand about NATO is that it is not just a military alliance, but also a political organization that stresses democratic values and Canadian policy strives to educate Ukrainians as to the benefits NATO brings them as citizens of the country.

“The important part of this cooperation is to bring Ukraine into the fold is not the technical part. It’s not about meeting military standards. Rather, it’s about co-operating with Ukraine to ensure that it can demonstrate to the alliance that it can organize itself according to democratic principles”, she said.

“Preparing to fight together is, relatively speaking, the easy part… Enacting and implementing strong laws is hard,” Galadza said.

The NUC is the decision-making body responsible for developing the NATO-Ukraine relationship and for directing cooperative activities. It also provides a forum for consultation between the Allies and Ukraine on security issues of common concern. Since 2018 its meetings have been blocked by Hungary which claims its minority in Transcarpathia is threatened by the Ukrainian language law.

Shevchenko said Ukraine is the only non-NATO country that takes part in all NATO operations and would like Canada to see Ukraine as a “de facto NATO flank” in the East and “its own natural partner in advancing your international agenda world-wide.”

On the subject of Canada granting visa-free status to Ukraine, Galadza said that’s a question she gets everywhere she goes and “there are opportunities on the horizon to deepen our understanding of the visa regime and to understand what the path forward looks like.” However, it’s a different path from what the Europeans have. While there are a lot of parallels, there are also a lot of differences.

“Very soon we will get into some deep discussions as to that and also some other issues related to immigration,” she added.

Shevchenko said there has been some limited progress on visa-free status, and some encouraging plans have come forward.

Another question raised was related to dealing with Russian disinformation and hybrid warfare.

Shevchenko said this is one of the natural areas for cooperation, especially since Ukraine has a lot of experience dealing with this and can share its experience.

“We feel that this is exactly one of those fields where Ukraine can and has already created added value for the free world and for our NATO partners,” he said.

Galadza said there are many ways both countries cooperate. During the most recent Ukrainian elections, Canada sent technical experts to Ukraine to see how Ukraine was reacting and during its G7 presidency set up a rapid response mechanism to support G7 countries with very specific campaigns. Canada also has a program that seeks to understand what influences people’s thinking where they get their information to help Ukraine and its partners target their messaging in a more effective way.

Responding to a question about the COVID-19 pandemic, Shevchenko noted that Ukraine does not have vast economic resources and strongly counts on international financial support for an economy he anticipates will be hit severely.

The situation in territories occupied by Russian proxies is especially acute as “we understand that the health infrastructure there is very poor and we understand that it can create a humanitarian disaster for the whole region.”

However, there are ways Ukraine can help Canada and the whole world, citing the example of the Antonov Mriya cargo plane – the largest in the world – which can hold 10 million surgical masks, or 250 tons of material, and has been utilized to fly in medical supplies. On May 1 Mriya landed in Montreal bringing with it the largest supply of medical equipment Canada has received throughout the crisis and is expected to come again, this time to Toronto on May 21.

Regarding the plight of Crimean Tatars, Galadza said Canada has a number of human rights projects that speak to this issue and is active in promoting Tatar culture and identity in Ukraine part of its local support.

When asked about the front runners in Canada-Ukraine trade relations, she singled out British Columbia which exports more fish to Ukraine than wine to the whole world.

She earlier noted that within the Canada-Ukraine Free Trade Agreement, which was signed two years ago, there is a provision for expansion in the fall and one of the key sectors that both countries will be looking at including is Information Technology (IT).

In her opening statement, Galadza noted several other areas in which Canada supports Ukraine. These include helping to build institutions grounded in the values we stand for, like the reform of Ukraine’s police system and supporting civil society. She singled out the 30-year-old Canada Ukraine Parliamentary Program as “an invaluable contribution”.

“Everywhere I go in Ukraine, I am met with the deepest gratitude on the part of the people of Ukraine to the people and the Government of Canada for our deep and abiding friendship and it is an incredible privilege to take this credit on behalf of all of you who work so hard on his as well,” she said.

In her closing remarks she stated: “There is no doubt that this is a mutually beneficial relationship and built as it is on incredibly strong people to people ties, growing business to business ties, huge opportunities and, most importantly built upon a set of common values and interests that stem from those values. There is a lot that Canada and Ukraine can do for each other, but more importantly together in a world that is finding old structures very confused… and as middle powers with large influential neighbours, we share these same values and have these ties.”

In his opening comments, Shevchenko stated: “We are natural partners for several reasons. We share the same view of the international order. We believe in multilateralism and international law. Second, we share the same aggressive and irresponsible partner, which borders Ukraine on the east and the north, and Canada on the Arctic.”

While Canada-Ukraine cooperation is mutually beneficial in the field of security, it can come in areas you don’t expect, such as the downing of the Ukraine International Airline jet by Iranian missiles in January. Most of the passengers were ultimately heading to Canada via Kyiv.

“I knew that we could be of some practical help to our Canadian brothers and sisters when it comes to identification of bodies, repatriation, investigation and financial compensation. And I know that that particular tragedy brought a lot of grief to Edmonton and to the university and I can assure you that it is just as heartbreaking to us today as it was in January. But one of the many things that I remember from January is that I switched TV channels in Canada just to hear many Canadians saying, we are so happy to have Ukraine as a partner in this very terrible situation,” he said

In closing, he cited a recent poll which asked Ukrainians to list the countries they considered to be their closest allies. Lithuania was first, followed by Canada. Ten years ago, they most likely would have been Poland and the United States.

He also stressed the value of Ukrainian studies in academia, recalling a statement he made in Edmonton during the celebration of the 40th anniversary of CIUS: