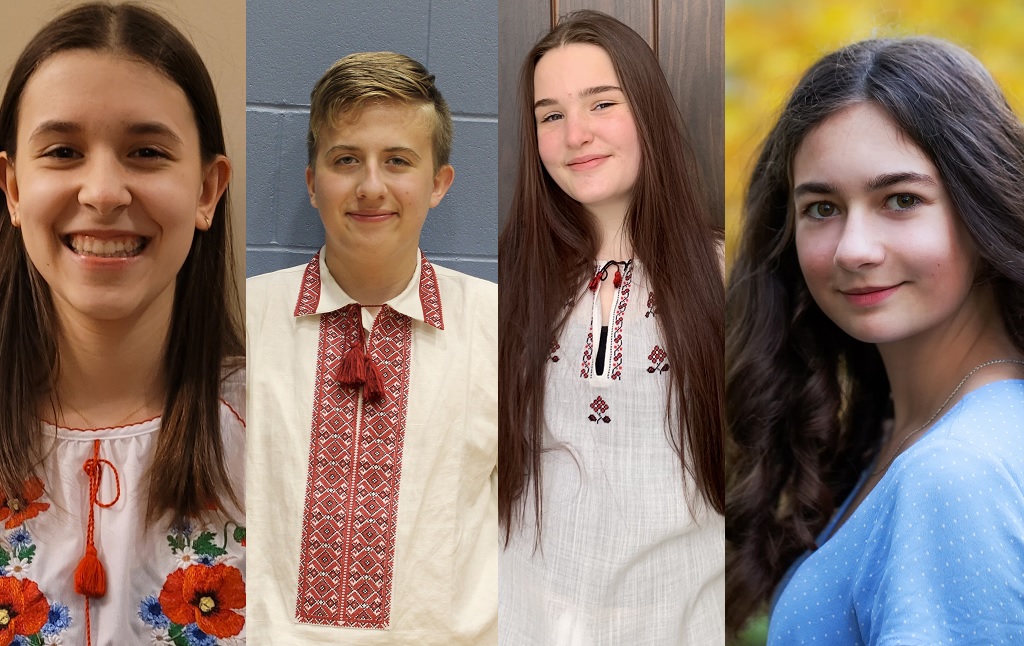 The Edmonton branch of the League of Ukrainian Canadian Women (LUCW) is pleased to announce the winners of the 2021 Holodomor Essay Contest. This Essay contest was established in 2020 to help junior and senior high school students in the Ukrainian-English bilingual program and at the Ivan Franko School of Ukrainian Studies develop a deeper understanding of the Holodomor. The topic for the 2021 essay contest was “How would you raise awareness about the Holodomor and increase knowledge about this Genocide of the Ukrainian Nation?” This year’s contest drew fifty-eight participants from four different schools.

Students earning first place were awarded $250, second place was awarded $200 and third was awarded $150. There were also three honorable mentions in each age category that were awarded copies of Olha Mak’s poignant Holodomor novel, “Stones under the Scythe” written especially for young people. The English translation of this volume by Vera Kaczmarskyj was sponsored by the Women’s Association for the Defense of Four Freedoms for Ukraine. All participants received personalized certificates of recognition.

The Edmonton Branch of the LUCW was delighted to again have three respected professionals judge the essay contest. Rena Hanchuk, an educator with years of experience teaching Ukrainian in the English-Ukrainian bilingual program and at the university level along with social studies and history at the high school level. Marco Levytsky is well known to the readers of this paper as he is the Western Bureau Chief for The New Pathway – Ukrainian News. He is a professional journalist and is highly esteemed for his integrity, objectivity, and passion to keep our community well informed. In 2020, Mr. Levytsky was awarded the Ivan Mazepa Cross by Ukraine’s President Volodymyr Zelenskyy and presented by Ukraine’s Ambassador to Canada, Andriy Shevchenko. The Ivan Mazepa Cross was established to honour citizens of Ukraine, foreign citizens, or stateless persons for significant contributions to the revival of the national, cultural, artistic, spiritual, architectural, military, and historical heritage of Ukraine, and for achievements in state, diplomatic, humanitarian, scientific, educational, and charitable activity. Boris Radyo is an experienced educator who taught all subjects in elementary, junior, and senior high levels and served as principal at several schools in Edmonton. His most recent position was Assistant Superintendent Educational Planning with the Edmonton Catholic School District, a position he held for 11 years before retiring in 2018. Without a commitment from our judges, this contest would be almost impossible to conduct. A special thanks is owed to our judges for their enthusiasm and willingness to volunteer a significant amount of their personal time to assess the essays.

The LUCW Edmonton Branch was established in 1955 and has continually been engaged in political activism, charitable works, and cultural programming in the Ukrainian community. The Edmonton Branch is very proud of its advocacy for the recognition of the Holodomor, the Ukrainian Famine Genocide of 1932-1933 as genocide through Bill 37: Ukrainian Famine and Genocide (Holodomor) Memorial Day Act passed unanimously by the Legislative Assembly of Alberta in 2008. Other recent projects supported by the branch include The Pier 21 project at the Canadian Museum of Immigration and the Guardian Angels Ukraine Project supporting medical treatment, rehabilitation and social re-integration of soldiers wounded in the war in Eastern Ukraine.

The Brotherhood of Ukrainian Catholics Alberta Branch once again provided generous financial support for the administrative costs of running this contest. This year, generous support was also provided by the Edmonton Branch of the League of Ukrainian Canadians. The substantial support of these organizations allows LUCW to continue this project and offer generous awards to the winners.

2022 will be a solemn anniversary year, marking the 90th (ninetieth) anniversary of the Holodomor. Planning for the 2022 Essay Contest will start shortly. Given that the Holodomor is a subject in the Alberta curriculum, the Edmonton Branch of the LUCW hopes to be able to continue to support this valuable educational project in future years.