Minister of Immigration briefs UCC in an urgent meeting 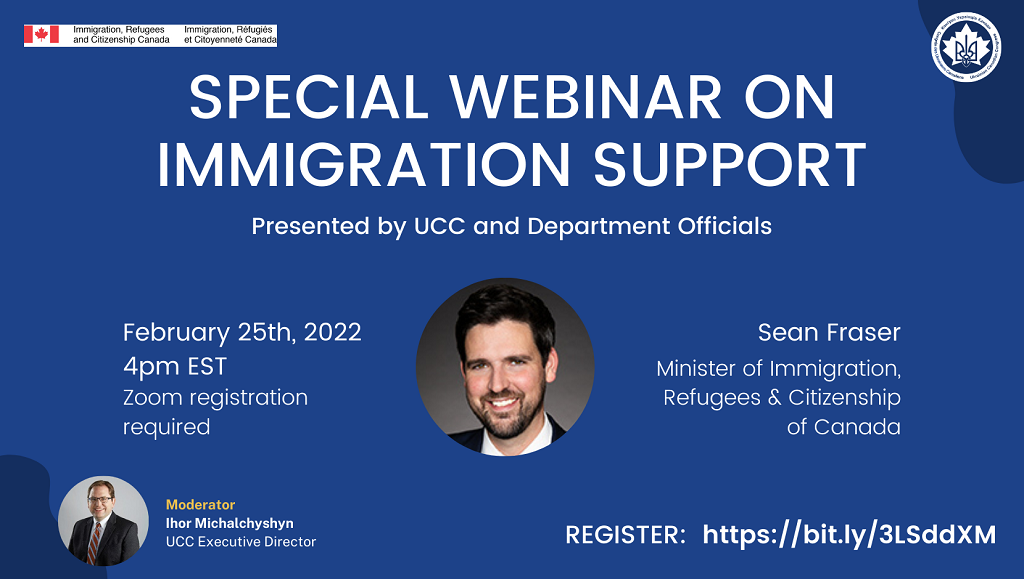 “Generations of Ukrainian immigrants, many of whom were forced to flee war and persecution, have helped build our country,” Fraser said. “We have a strong and united Ukrainian Canadian community across our country. And I want to let you know that you’re not standing alone during this hour of darkness.”

The IRCC has been working closely with other government departments in anticipation of the escalating situation in Ukraine. On Friday, Prime Minister Trudeau announced certain new measures to support Ukrainians to make it easier and faster for Canadian citizens, permanent residents and their accompanying immediate family members to return to Canada.

Fraser said that Canada has been prioritizing applications for travel documents for Canadian citizens, permanent residents and their immediate family members so they can come home quickly. The office prioritized processing for Ukrainians who want to reunite with family, study, work or start a new life in Canada. This includes applications for proof of citizenship, permanent residents, temporary residents, study and work permits as well as citizenship grants for adopted children.

Fraser said that Canada plans to extend temporary status to those who are in Canada now who are facing travel plans that are no longer possible for reasons of personal safety. For Canadian citizens and permanent residents who do not have valid travel documents on an exceptional basis, the Ministry is issuing single journey travel documents, which will allow those, who do not currently have passports, to be able to travel. Fraser said that the turnaround time of urgent processing of the emergency travel documents is within 24 hours. Fraser said the IRCC negotiated safe passage of Canadian citizens, permanent residents and their families with countries that border Ukraine to the west, including Poland, Moldova, Slovakia, Hungary and Romania.

Retroactive to February 22, the Ministry is developing a public policy to waive fees for certain travel and immigration documents, such as Canadian passports, permanent residence cards, proof of citizenship, visitor visas and work and study permits. The office also launched a dedicated immigration phone line for Ukraine available both inside Canada and abroad to answer immigration inquiries, so that applicants can get assistance faster. The phone number is 613-321-4243.

“We’re working to prepare additional measures, and we will be ready to welcome more Ukrainians into Canada in the days and weeks ahead,” Fraser said.