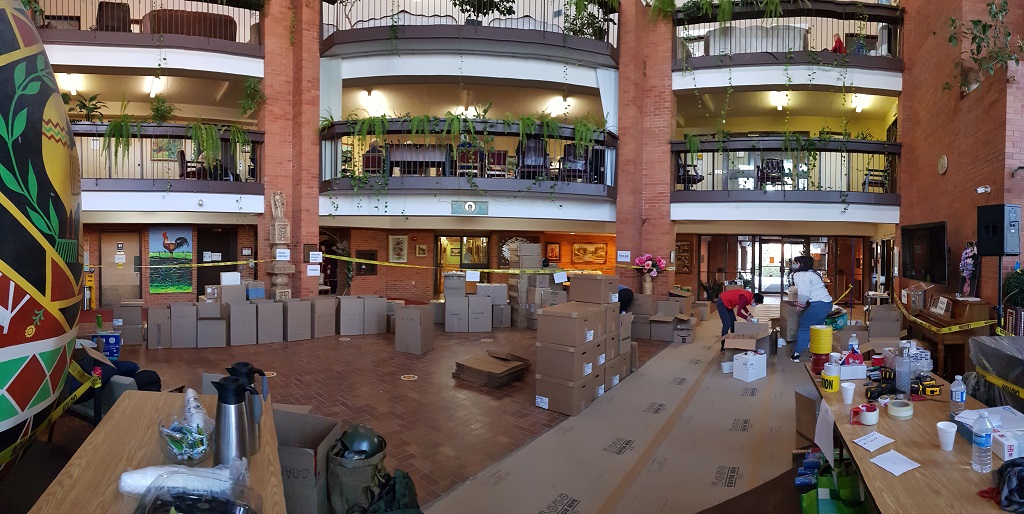 Volunteers at the Ivan Franko Homes in Mississauga sort and prepare humanitarian packages at the beginning of March to be sent to Ukraine.

As Ukrainians valiantly defend their land, Russians attack the defenceless.

As we enter the fourth week of the undeclared war the Kremlin has unleashed on Ukraine one can only marvel of the indomitable spirit of the Ukrainian people. Much to his dismay, Vladimir Putin has only succeeded in uniting the people of Ukraine like never before. Ukrainian-speaking and Russian-speaking alike stand up with a resistance that is unbreakable. Feuding politicians have set aside their differences and stand together for a united Ukraine. Above all the physically diminutive Volodymyr Zelenskyy towers as a wartime leader refusing to leave embattled Kyiv for safety and rallying his people behind the struggle. Truly he has become Ukraine’s Winston Churchill.

Around the world millions are showing their solidarity with Ukraine. They march in the streets. The Ukrainian anthem resounds in sports arenas and other venues. Church bells ring in unison throughout many countries. The United States and its allies have united in sanctioning Russia like no other country has been sanctioned before.

The steadfast resistance of the Armed Forces of Ukraine to the onslaught of the vastly superior (in terms of numbers and weapons) Russian forces has astonished the world. They have inflicted heavy casualties on both personnel and equipment. The Russian advance has stalled. Their own troops are heavily demoralized many not even knowing why they are there.

Unfortunately, the side effect of Ukraine’s successful ground defence has prompted Russia to react the way all bullies and cowards do — to rain terror upon the defenceless. They have indiscriminately shelled and bombed the cities of Ukraine. They have targeted hospitals, maternity wards, schools, residential buildings. Cities like Mariupol have been turned into rubble while the besieged citizens run out of food and water. Russians cynically offer humanitarian corridors for civilians to escape, only to attack them once they set out. The list of war crimes just mounts relentlessly.

This has created a refugee crisis unseen in Europe since the Second World War. As of March 14, 2.8 million people have fled Ukraine, the majority of these coming to Poland which has responded in a most generous manner but is getting stretched to the limits of its resources. There is also a great need for humanitarian aid in Ukraine itself. This is where we and all Canadians have to step in and help.

Many organizations have responded to this call. As always there may also be some unscrupulous individuals who create scams to take advantage of this horrible situation. And Russians themselves may create false fronts simply to divert the cash. Thus, it becomes imperative to know whom to trust and who can best deliver the goods. Within Canada’s Ukrainian community this is being coordinated through the Ukrainian Canadian Congress (UCC), and the Canada-Ukraine Foundation (CUF), who have jointly established the Ukraine Humanitarian Appeal. The CUF/UCC Humanitarian Appeal has already delivered multiple tranches of aid, valued at over $2 million. Aid has been delivered wherever affected recipients are found, from heavily shelled areas in the north and east of the country, to areas in the west of Ukraine and in neighbouring countries where displaced families need support. CUF and UCC are withholding more specific information due to security concerns. Subsequent tranches of support will follow in coming days as they monitor and confirm prior deliveries of support and assess the evolving needs, together with partners on the ground in all parts of Ukraine and its neighbours where help is required. Tax receipts are provided by CUF which reserves only 10% for administration costs. If you wish to donate you can go either to the UCC website (https://www.ucc.ca/) or CUF (https://www.cufoundation.ca/). For more information, please contact: [email protected]

Another organization that is doing a tremendous job is the Catholic Near East Welfare Association (CNEWA). Their campaign is supported by both the Ukrainian and Roman Catholic Churches in Canada. Many are raising funds for CNEWA through their own offices. In Ukraine, CNEWA’s aid is coordinated through Caritas Ukraine. CNEWA, which has a regular administrative fee of 10% has lowered this to only 5% for Ukraine assistance. If you wish to make a donation to CNEWA contact: www.cnewa,org.ca, or http: cnewa.org.campaigns/Ukraine/. For mail-in donations send to CNEWA Canada, 223 Main Street Box 80, Ottawa, ON, K1S 1C4.

Then there is the issue of resettlement. With the great strain that this is putting on the resources of Ukraine’s Western neighbours, countries like ours also need to provide refuge in to help alleviate it. The vast majority of refugees are not looking for permanent residency. They hope to return to their homes at some point. And also, to their husbands and fathers as men between the ages of 18 and 60 aren’t allowed to leave Ukraine as they’re wanted to defend the homeland.

The Government of Canada has announced a new program designed specifically to meet the needs of this crisis. For Ukrainians who want to come to Canada temporarily, Immigration, Refugees and Citizenship Canada (IRCC) will create a Canada-Ukraine Authorization for Emergency Travel. There will be no limit to the number of Ukrainians who can apply. This is the fastest, safest, and most efficient way for Ukrainians to come to Canada and eliminates many of the normal visa requirements. All Ukrainian nationals will be able to apply through this new path, and, pending background check and security screening, their stay in Canada could be extended by at least two years.

If you have family members who have fled and are currently in Poland or one of the other neighbouring countries, or if you just want to provide some help for the refugees, this could be a very good program to take advantage of. It is preferable to using refugee status to sponsor a person. For one thing the person must first get UN certification as a refugee. That is a complicated process. For another the sponsor takes on a legal obligation to support them, a caveat that is not a requirement for the temporary resident program. Finally, once a person is classified as a refugee they cannot return to their homeland – ever.

Unfortunately, the government is still working out the details and application forms for this particular program have not yet been finalized. That is expected to happen very soon. When it is announced this newspaper will provide all the necessary information. Please check our website (https://newpathway.ca/) for updates.

In the meantime, the UCC is preparing a data base of people willing to bring refugees into their home. If you wish to volunteer to open your doors and your hearts, or help in any other way, please go to the UCC website (https://www.ucc.ca/), click the button that says, “I WANT TO HELP” and fill out the form.

Locally, the various branches of Ukrainian Canadian Social Services will be coordinating the resettlement. There are nine branches throughout Canada: Edmonton, Hamilton, Manitoba, Montreal, Saskatoon, St. Catharines, Toronto, Ottawa and Vancouver. To find contact information for your branch go to: https://www.ucss.info/

Outside our own community, the Red Cross is the most reliable international organization for humanitarian aid. Administrative and fundraising costs amount to 22%. For every dollar donated, 78 cents go to the cause.

Unfortunately, it looks like the war will be long and protracted. Ukrainians will put up a determined fight against a much superior foe and will never surrender. For his part, Vladimir Putin does not want to give up his imperial dream and will not accept defeat. This means the humanitarian crisis will only get worse and all freedom-loving people around the world must do their part to help alleviate the suffering.

So please take the plight of all the Ukrainian refugees who have left their husbands, fathers and homes behind and need some shelter from the storm to heart. Help them in which ever way you can. And please be generous.