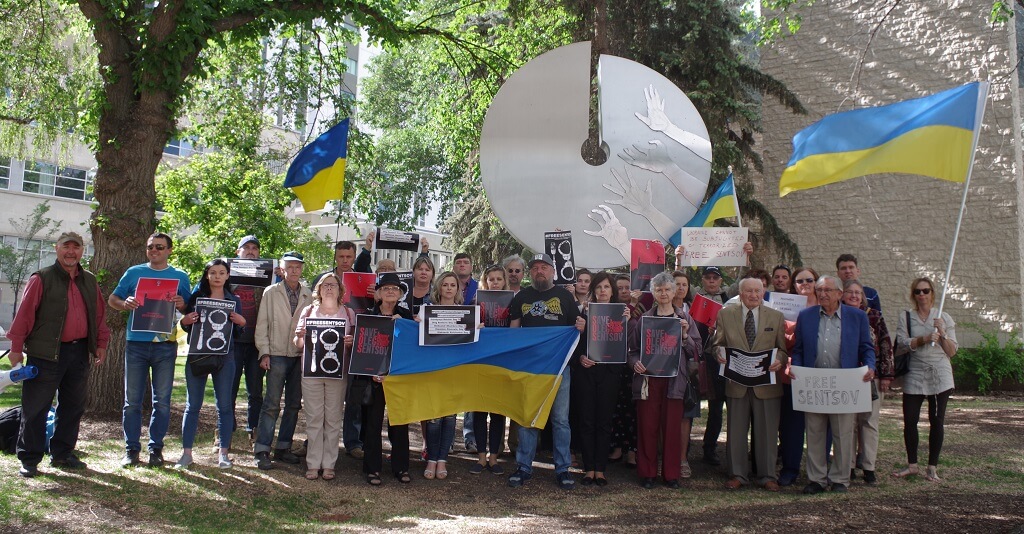 The 41-year-old Sentsov, a native of Crimea who opposed the Russian annexation of the peninsula, is serving a 20-year prison term after being convicted on terrorism charges that he and human rights groups say were politically motivated.

On May 14, Sentsov declared a hunger strike demanding the release of 64 other Ukrainian citizens that he considers to be political prisoners in Russia.

A global campaign to demand the release of Sentsov and the other prisoners has been organized ahead of this summer’s World Cup soccer competition in Russia. Several rallies to free Sentsov were held on June 1-2 in numerous Ukrainian cities as well as in Brussels, Paris, Sidney, Warsaw, Tel Aviv, Riga, Leipzig, Vienna and London. In Canada, rallies and other actions have also been held in Victoria, Vancouver, Calgary, Winnipeg. Mississauga, Toronto, Ottawa, Montreal and Halifax.

“We have to show a democratic country like Canada that there are totalitarian regimes like Putin’s regime who violate the territory of sovereign states like ours, illegally arrest and throw our citizens into prison, and the world should know this. That’s the basic goal of our action,” the organizer of the Edmonton event, Vasyl Voronovsky, told New Pathway – Ukrainian News, speaking in Ukrainian.

People in democratic countries must be made aware of the threat that Russia poses to global security, he noted.

“This is a world threat. This is not only a threat to Ukraine, it is a threat to the whole world,” he said.

Other objectives also included reminding people about the death of 298 innocent passengers of Malaysia Airlines Flight MH-17, shot down over eastern Ukraine in 2014 by Russian soldiers serving in Russia’s 53rd anti-aircraft missile brigade and to protest the decision to award the 2018 FIFA World Cup soccer championship to Russia even as Russia wages undeclared wars on its peaceful neighbours.

Voronovsly, a resident of Kyiv, who has been in Edmonton for five months, is involved with assistance to children escaping the war zone in eastern Ukraine and with help for volunteer soldiers.

Both the provincial council and local branch of the Ukrainian Canadian Congress supported the rally.

Taras Podilsky, President of the Edmonton Branch of the League of Ukrainian Canadians, read out an open letter on the Sentsov case that delegates to national annual meeting of LUC held in Edmonton that weekend had written to Prime Minister Justin Trudeau, to participants of the rally.

“We are writing to express our profound concerns about the rise of human rights violations by Russia, including the ongoing arrest of Ukrainian citizens who oppose the illegal Russian occupation of Crimea, Ukraine.

“Oleg Sentsov, an accomplished filmmaker, along with more than 60 other known Ukrainian citizens, have been illegally imprisoned, tortured and denied basic human rights for expressing their views. In protest, Oleg Sentsov, along with other Ukrainian political prisoners have been on a hunger strike.

“While we are grateful for Canada’s continued support for Ukrainian territorial integrity and independence, we urge the Canadian government to pressure Russian authorities through diplomatic means and sanctions, if necessary, to immediately free all Ukrainian political prisoners,” stated the letter.