The Threads That Connect 2021 Project, a year-long celebration of Ukrainian embroidery and textiles, has wrapped up in Edmonton, culminating in a fashion show at MacEwan University’s Allard Hall, Sept. 10.

“The project had many moving parts on an international scale,” said Darka Tarnawsky, Producer of the show. “The world situation made things more challenging, to say the least. But we approached the Project with optimism. The show was sold out weeks in advance and was met with much enthusiasm from the audience. It was a unique night out in a time of constraint, and a beautiful representation of our cultural fabric…literally.”

The Fashion Show featured Ukrainian clothing on the runway for the first time in Edmonton, home of the largest settlement of Ukrainians in Canada. The Show displayed fashion from the Ukrainian-Canadian diaspora and provided a modern showcase of how Ukrainian clothing has evolved and adapted to changing trends while staying true to its roots.

Presented by the Alberta Council for the Ukrainian Arts (ACUA) and the Ukrainian Resource & Development Centre of MacEwan University in Edmonton (URDC), the Project combined a series of events that explored Ukrainian embroidered fashion over time, taking attendees on a journey through Ukrainian history and culture.

“The Threads That Connect Fashion Show offered a unique experience to witness exquisitely embroidered clothing, modelled in a celebration of the history and talent of artists who have created them, while looking to the future of fashion,” Tarnawsky said.

The Show consisted of three segments: historical, retro and the 2021 Fall Collection of a contemporary Lviv-based designer Olena Romanova. Members of the Ukrainian Canadian diaspora of Edmonton have lent their clothing for the historical and retro segments, making it completely unique to Edmonton.

The historical segment (pre-1960s) featured clothing from Lyudmyla Shefel’s private collection. Each piece was an authentic Ukrainian traditional costume, such as ones used for ceremonies or worn for festivals, weddings and other holidays. All were complete with embroidery patterns and motifs specific to the region in which they originated.

The retro section (1950-1990s) featured everyday clothing such as shirts and dresses that Ukrainian Canadians have modified with embroidery to showcase their heritage and talent. Sleeves and skirt hems were decorated with traditional patterns that reflect the regions in which each family originated. Among the items to walk the Edmonton runway were skirt suits decorated with geometric Hutsul designs and dresses with hems embroidered with the red and black roses typical of Kyivska Oblast.

Finally, the Show features the 2021 Fall Collection of contemporary Lviv-based Ukrainian designer Olena Romanova. It displayed traditional Ukrainian motifs and patterns in clothing for the modern woman, reimagined in the world of high fashion. Romanova works out of her studio to create clothing with all types of textile materials. Due to COVID-19 travel restrictions, she was unable to attend the show. 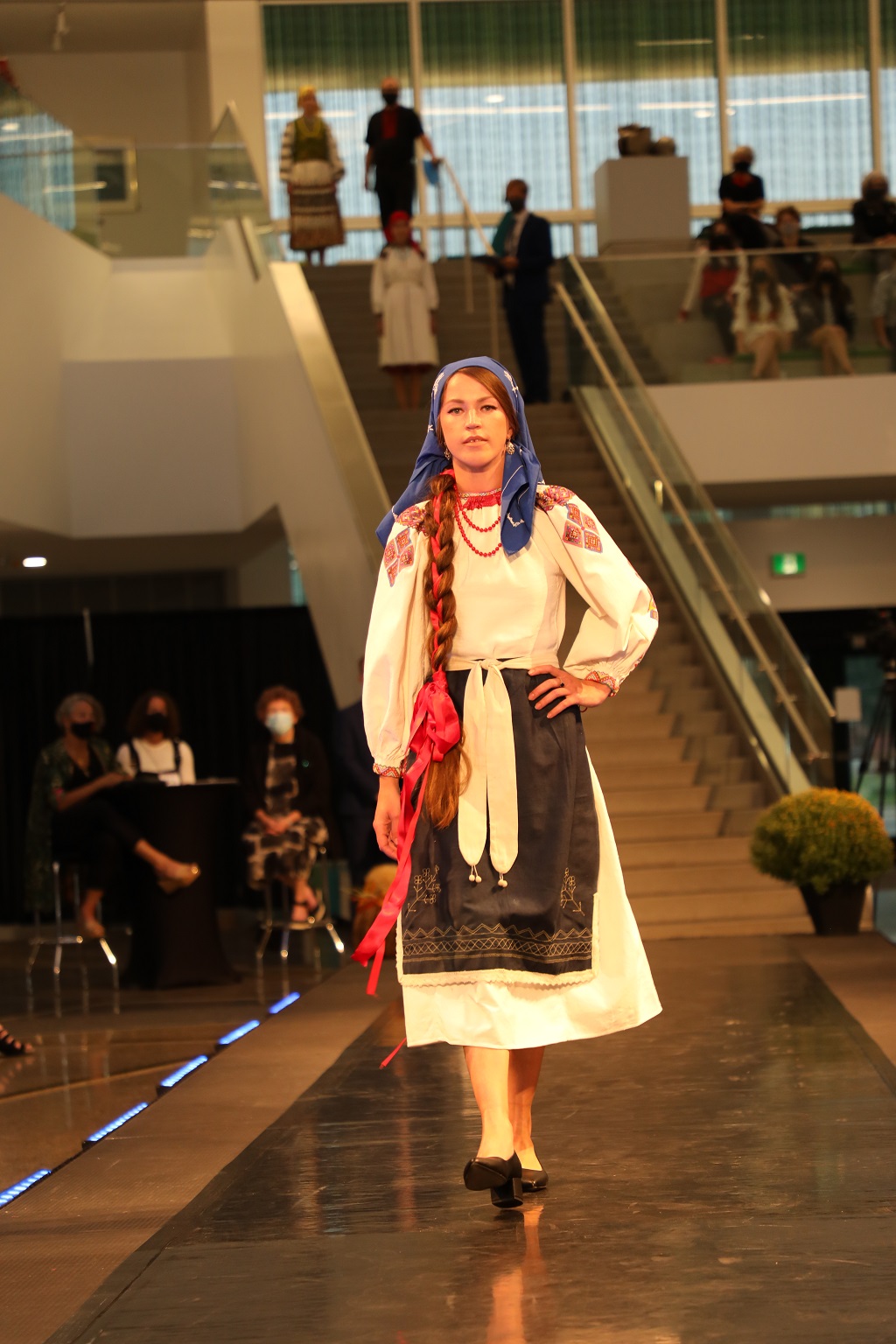 Tarnawsky said that, at first, Threads That Connect was meant to be an international symposium that lasted six days in May of 2020.

“It meant to bring together academics and fashion enthusiasts from Canada and Ukraine to explore embroidery styles and design,” she said. “However, the emergence of the COVID-19 pandemic in Canada months prior led to the shut-down of in-person events and large gatherings. The symposium was postponed and plans for the Threads That Connect Fashion Show were put on hold.”

Throughout 2021, Threads That Connect exhibits and workshops were adapted to a largely virtual format. The Fashion Show remained the Project’s final in-person event and was rescheduled to September 2021. The symposium featured two elements of the original plan: a Thursday night panel titled “The Circle of Life of Fashion” and a Saturday marketplace.

The panel featured business owners and fashion designers, who reflected on how fashion has allowed them to embrace their heritage. It also featured a video presentation from Romanova who discussed the evolution of Ukrainian clothing from being an element of cultural heritage to a piece of art in fashion.

The Saturday marketplace featured works from textile artists and fashion designers from Canada and Ukraine, promoting emerging and prominent members of the fashion and crafting communities. Romanova’s Fall Collection was a hit at the market, with models and attendees coming to photograph the outfits that caught their eye at the Show.

“The final event of Threads That Connect combines the two and a half years of close collaboration between URDC and ACUA,” said Larisa Hayduk, Fashion Show Committee Co-Chair. “It celebrates connections between different waves of immigration in this country, and between Canada and Ukraine. It honours our heritage. It gives hope to future generations.”

“URDC’s mandate is to bring community to the campus and campus to community,” Hayduk said. “The Fashion Show highlighted community-university engagement at its finest.”

In early 2021, organizers launched a social media campaign #Favourite_Threads that asked the Ukrainian community to submit photos of their favourite embroidered clothing. The campaign allowed the community to express their connection to their heritage through their clothing and become a part of Threads That Connect Project.

“The Threads that Connect Fashion Show was a showcase focusing on the Ukrainian Threads that bind and yet release us,” said Olesia Luciw-Andryjowycz, the Fashion Show Committee Co-Chair. “Not only do we embrace our cultural history, but we are also inspired by it in our fashion today. Our Ukrainian fashion has flourished in contemporary Canada. It is a treasured art.”

Tarnawsky said that, as one of ACUA’s largest events to date, the Fashion Show required an extensive team of volunteers. Recruitment began in the early summer and dancers from Cheremosh, Shumka, Viter and Volya dance companies agreed to volunteer as models, alongside other active members of the local Ukrainian community. ACUA members became a part of the behind-the-scenes volunteer team, helping to make the show a reality.

Cultural Heritage as an Element of National Security: the Crimea Lens

Cultural Heritage as an Element of National Security: the Crimea Lens