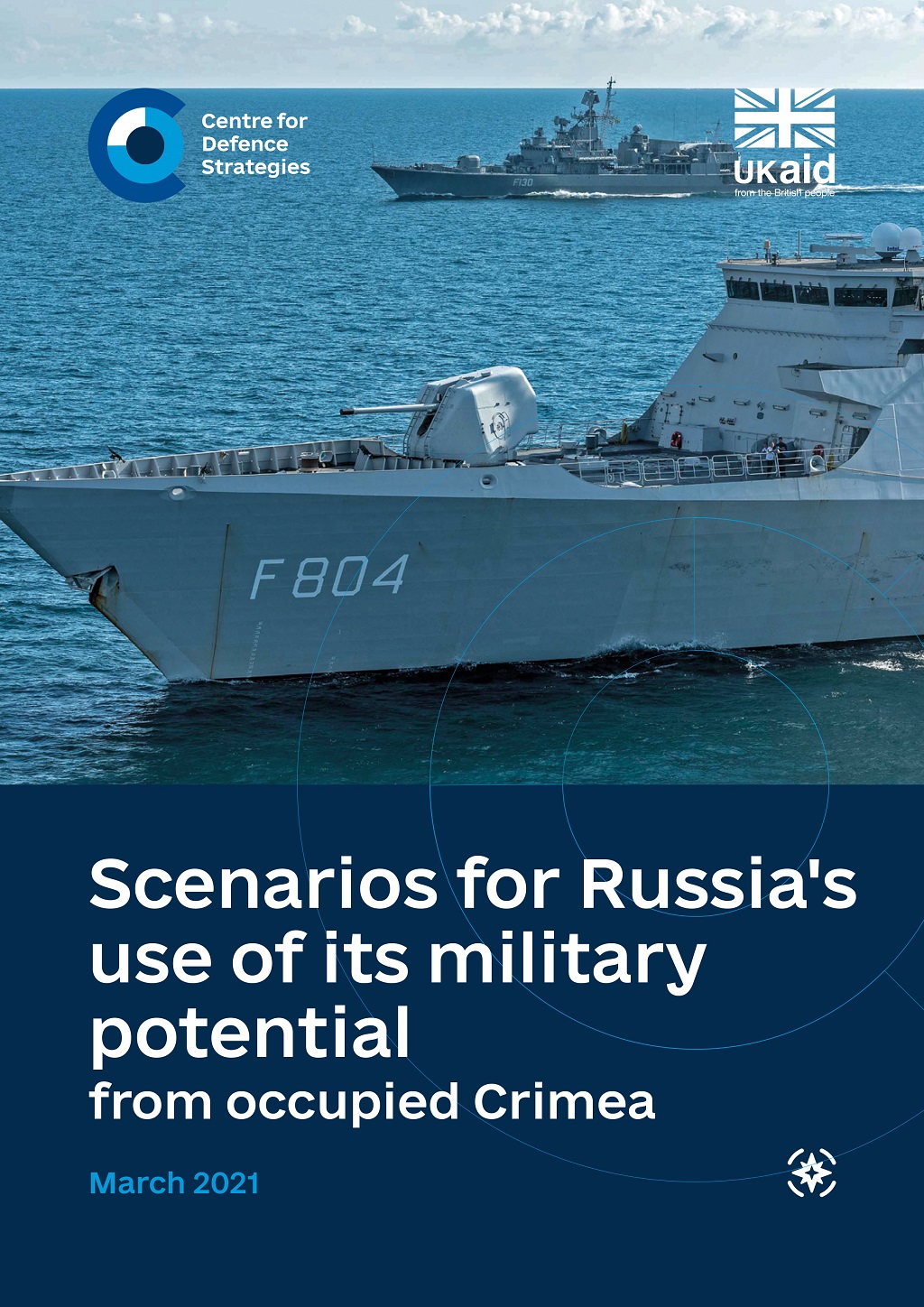 Highlights from the “Scenarios for Russia’s use of its military potential from occupied Crimea”, prepared by Andrii Ryzhenko, Fellow, CDS and Ihor Kabanenko, ret. Admiral, Ukrainian Navy.

Russia sees Crimea as a core element of its dominance in the Black Sea region (including the Sea of Azov) and as a critical base for its geo-strategic influence in the Eastern Mediterranean, the Middle East and North Africa. It is essential to consider possible scenarios for Russia’s military potential in Crimea in the Black, Azov and Mediterranean seas.

Russia in the Black Sea region

The latest Russian naval military exercises in the Black Sea region are aimed at establishing, strengthening and maintaining a sustainable naval influence on coastal states and aiming their military power in the direction of the Atlantic Ocean.

The presence of the former Soviet Black Sea Fleet facilitated Russia’s initial “toehold” in Crimea that remained there until the time of its division in 1997. The peninsula lost its features of an “unsinkable aircraft carrier” after the collapse of the USSR. However, immediately after Crimea’s occupation in 2014, Russia began an intensive militarization of the peninsula. During the seven years of Crimea’s occupation, the Armed Forces’ leadership of the Russian Federation has systematically strengthened Russian naval capabilities in the Black Sea. By 2020, the balance of power in the Black Sea region has already changed to Russia’s advantage.

The exercises of the Russian Black Sea Fleet since 2016 began to involve joint tactical forces (JTFs) along with missile firings. During these exercises, destroying NATO naval groups with missile strikes has been simulated. At the same time, the combined forces of the Russian fleet have developed the coordination of their activities with attack aircraft, helicopters and special forces.

In addition to purely military activities, Russia is implementing a strategy of “creeping expansion” in the Black Sea waters and creating and spreading obstacles to freedom of maritime navigation. Russia declares unreasonably large areas of the sea prohibited for navigation, allegedly for combat training and firing. These hybrid actions have the signs of short-term aggressive blockading actions. They aim to collect the necessary information to support further active actions at sea and have a very negative impact on maritime navigation.

Russia in the Mediterranean region and North Africa

Russia is rebuilding its military capabilities in the Mediterranean Sea. There is a permanent grouping of the surface forces of the Russian Navy (5th Operational Squadron) in the eastern Mediterranean region, which now includes up to 15 surface ships and submarines on a rotational basis. The main operational goal of this standing task force of the Russian Navy is to create naval capabilities that are visible to the NATO command in the region.

Certain countries of North Africa were satellites of the USSR in the 1960s and 1980s, which draws attention to some current Russian naval exercises in the Mediterranean Sea. An example is an annual exercise with the Egyptian Naval Forces “Friendship Bridge” launched in 2015. Significantly, Egypt purchased two Mistral helicopter carriers, which were ordered and built for the Russian Navy. However, this contract was cancelled at its final stage when the Russian Federation occupied Crimea. Through these exercises, Russia opposes the implementation of the NATO Mediterranean Dialogue program, resumes its influence on countries that are within its traditional interests and gets acquainted with the experience of operating Mistral landing ships with Russian helicopters on board.

Understanding possible scenarios for Russia’s use of its military potential will help visualize Russia’s military ambitions and provide proposals for countering them to both the Ukrainian authorities and their partners. Understanding Russia’s capabilities and intentions will help Ukraine, its partner countries and NATO to develop their defence strategies and coordinate joint efforts.

Countering Russia is possible primarily through asymmetric methods, with the concentration of efforts on the enemy’s vulnerabilities. The geographic areas for the counteraction of potential Russian aggression at sea allow Ukraine to do this feasibly by using small but fast, manoeuvrable and well-armed boats together with coastal missile and artillery systems.

The sea flank remains the least protected area in southern Ukraine. Although Ukraine’s naval capabilities were reinforced by coastal defence forces, naval infantry and small armoured boats, Ukraine’s military capabilities are significantly inferior to the Russian ones. The most optimal way to strengthen them is to develop a maritime surveillance system, deny access to the proximal maritime zone and protect ports and navigation close to Ukraine’s coast. At the same time, it is necessary to develop a basing system on the coasts of the Black and Azov seas for the Ukrainian fleet.

Ukraine’s countering of the Russian Black Sea Fleet aggression should use asymmetric strikes against the most vulnerable enemy forces. The most achievable valuable tool to accomplish this, given the resources available, is building up the fleet’s surface forces with small-sized, high-speed and manoeuvrable boats that can ensure the performance of the tasks near the coast (out to 200 miles).

Recommendations to the Ukrainian authorities: