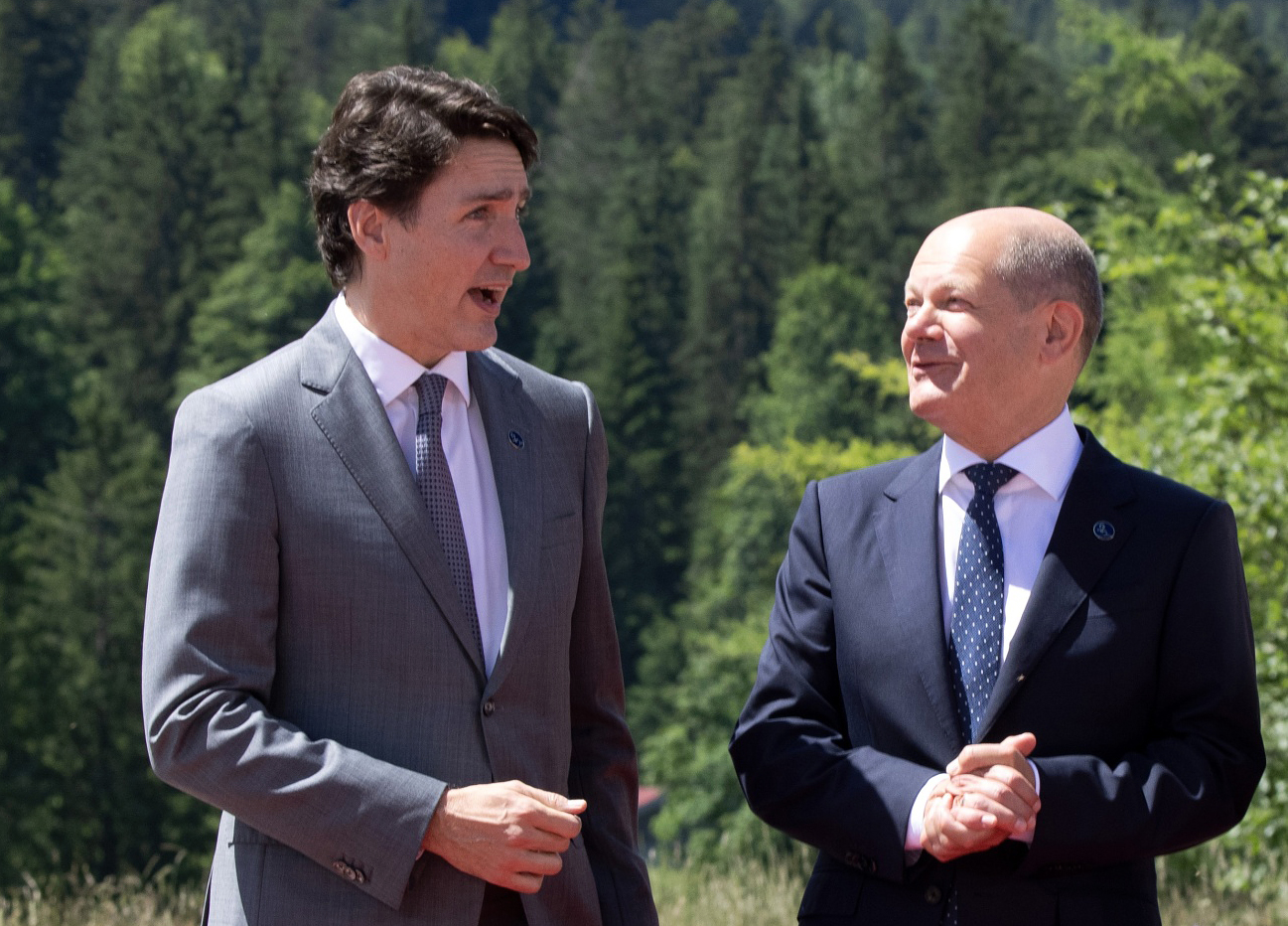 Justin Trudeau is welcomed by Olaf Scholz on the opening day of the Group of Seven summit in Elmau, Germany, on June 26.Photographer: Liesa Johannssen-Koppitz/Bloomberg

Responding to Russia’s full-scale invasion of Ukraine, the European Union set a plan in March to make Europe independent from Russian fossil fuels before 2030. Germany’s plans were even more ambitious – the country set a goal of halving its imports of Russian oil and coal this year and freeing itself from its dependence on Russian natural gas by the middle of 2024.

Then, in recent weeks, Russia moved to slash Europe’s gas supplies which may cause a collapse in energy markets and weaken Europe’s resolve in supporting Ukraine. Germany, which has been hit particularly hard by the Russian move, set its gas risk level to the second-highest “alarm” phase and is scrambling to find any Liquified Natural Gas (LNG) available on the global market.

Earlier this year, Natural Resources Minister Jonathan Wilkinson said Canada could help Europe in the short term by increasing its shipments (through the U.S. terminals) of crude oil by 200,000 barrels per day (bpd) and natural gas by the equivalent of 100,000 bpd by year-end.

The conservative opponents have criticized this plan. The Conservative Party called the government’s commitment to supply 100,000 bpd equivalent of natural gas to Europe “paltry”. While Alberta Premier Jason Kenney said that he believes Canada could increase its oil exports by as much as 900,000 bpd through optimizing its pipeline network and shipping more by rail.

Wilkinson, in turn, criticized the latter statement and said he did not know how such additional export volumes were possible referring to the recent exercise with the sector which came up with the additional 300,000 bpd.

Germany is now urgently working to develop its capacity to receive LNG from overseas. The country is renting four floating storage and regasification units and choosing the North Sea port of Wilhelmshaven as the first LNG handling hub. German Chancellor Olaf Scholz said in June he was confident that LNG would start flowing into the country by early 2023.

Germany has made it clear that it sees Canada as a preferred supplier of LNG. As Wilkinson said in a recent interview with Bloomberg, “We are interested in trying to help our friends in Germany, and the Germans have been pressing us to try to do what we can”.

The two countries have been discussing options for an LNG terminal on Canada’s east coast to export to Europe. Meeting last week on the sidelines of the Group of Seven summit, German Chancellor Olaf Scholz and Canadian Prime Minister Justin Trudeau discussed the issue. German officials are hopeful the two countries will be able to announce an LNG deal by the time Scholz visits Canada in late August.

At the same time, Canada, the world’s sixth-largest natural gas producer (in 2020), does not currently have any functioning facilities to export LNG. On the east coast, the Canadian government is in discussions with the companies behind two proposed facilities, a Spanish company Repsol’s Saint John LNG facility in New Brunswick and the Goldboro LNG facility in Nova Scotia proposed by Pieridae Energy.

After Pieridae Energy abandoned plans for a land-based Goldboro LNG project, it proposed a 2.4 megatonne per year floating export facility. The timetable for that kind of project would be much shorter than the 4.5 years envisaged for the land-based project. For comparison, in Germany, planned floating storage and regasification units should become operational within months (although the lack of infrastructure at Goldboro is also part of the equation). 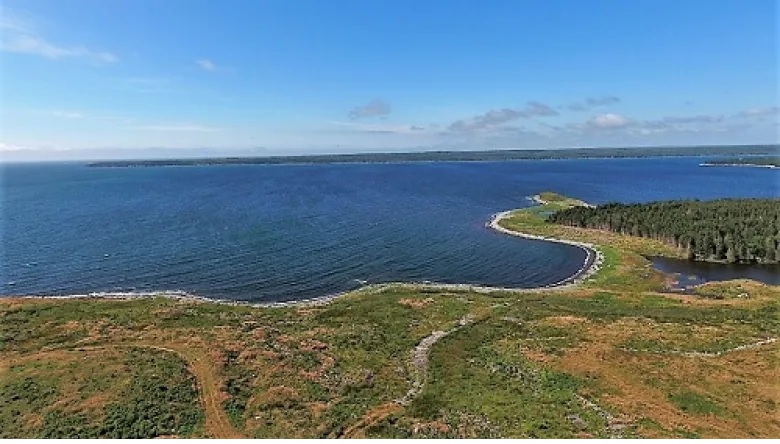 The main constraint for this project may come from the lack of east-west pipelines in Canada as, according to Environment Minister Steven Guilbeault, East Coast has only enough natural gas supply to accommodate one new LNG export facility and the gas would need to be brought from the western provinces. In his interview with Reuters last week, Guilbeault called the idea of constructing new gas pipelines in Canada not “very realistic”.

The issue of pipelines has been a contested one for a long time in Canada. A proposed LNG project, which would also depend on the availability of pipelines, GNL Quebec’s Énergie Saguenay, needed a 780-km natural gas pipeline from northern Ontario to the region north of Quebec City. The project was disapproved by both Quebec and federal governments. Conservative leadership hopeful Pierre Poilievre promised back in April that he would revive the project if elected Prime Minister. He also noted: “When Trudeau took office, there were 18 proposals to liquefy natural gas in Canada. Not a single one of them has come to pass. Only one is under construction” (on Canada’s West Coast – NP-UN).

These kinds of projects also need financial support: Pieridae Energy has previously requested nearly $1 billion as a grant, repayable contribution or loan guarantee from the federal government to support the Goldboro project.

The industry representatives have indicated their interest in advancing the LNG export projects. Since the onset of the war in Ukraine, CGA has held 16 individual embassy briefings and met with the EU delegation to Canada (at their request) to discuss Canada’s LNG export prospects and how they could help Europe in a time of energy crisis.

On emissions, which is a critical issue for the Canadian government, the industry emphasizes that the Canadian natural gas sector’s emission profile is much lower compared to the global marketplace. This means that getting more of Canada’s LNG to the world will help lower global emissions.

Whether the Canadian government is ready to expedite the regulatory process and assist the industry financially in bringing LNG exporting projects online sooner than in three years will become clear in August, during German Chancellor Scholz’s visit to Canada.

Getting the Canadian LNG to the global markets will help Europe become much more economically independent of Russia and reduce Russia’s revenues from sales of its energy products. This in turn would significantly increase chances to end the Russian aggression against Ukraine. In the meantime, after the bombings in Kremenchuk and Odesa, the civilian death toll of the war exceeded 28,000.

Body bags containing the remains of some of the 21 civilians killed by a Russian missile strike lie
in front of a damaged residential building in the village of Serhiyivka on July 1. Image: RFE/RL / Press service of the State Emergency Service of Ukraine / Reuters