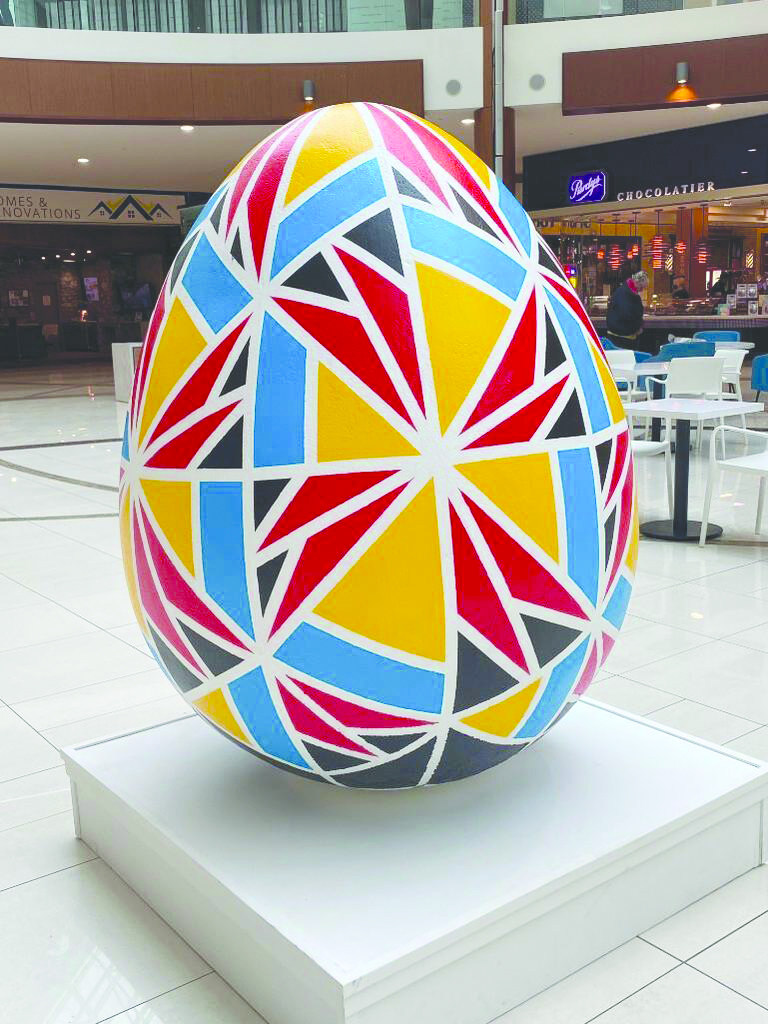 A pysanka by Daena Diduck

Along with Kingsway Garden Mall in Edmonton, Calgary’s Southcentre Mall is also hosting a fundraiser with larger-than-life Easter eggs. The ‘Pysanky for Peace‘ art fundraiser kicked on April 15 (World Art Day) and is in honour of the traditional pysanky style of Easter egg artwork originally from Ukraine!
Visitors are invited to explore five oversized eggs, ranging from three to six feet tall, in Centre Court until April 30 during mall hours. The eggs are painted by pysanky specialist Daena Diduck with assistance from Dana Teh and Jeff Minkevics.

Daena has been writing pysanky, the art of Ukrainian Easter eggs, since she was a little girl. Both sides of Daena’s family are Ukrainian and they came to Canada from western Ukraine during the first wave of immigration to Canada. Daena went on to work at the Ukrainian Museum of Canada in Saskatoon where she taught many classes for the museum as well as displayed her work in the gift shop.

She moved to Calgary in 2005 and since then, has taught classes in Calgary for various schools and community groups. She was part of the Ukrainian Museum’s Pysanka exhibit and does various demonstrations at venues such as the Calgary Ukrainian Festival and the Calgary Farmers Market. Her pysanky are also featured in Edmonton at the Alberta Council for the Ukrainian Arts, or ACUA. Daena was in Ukraine in 2019 with other pysanka artists on a special tour. She was to go back in 2020 for the opening of an exhibition of North American Pysanky that included her work at the Pysanka museum in Kolomyia, which has since been delayed.

The Easter eggs will be sold via an online silent auction in an effort to raise funds for the Edmonton Branch of Ukrainian Canadian Social Services (UCSS, Edmonton), a charitable organization that responds to the needs and interests of the Ukrainian community in Canada through a wide range of programs and services.

All funds collected through the Silent Auction will be donated to UCSS, Edmonton.