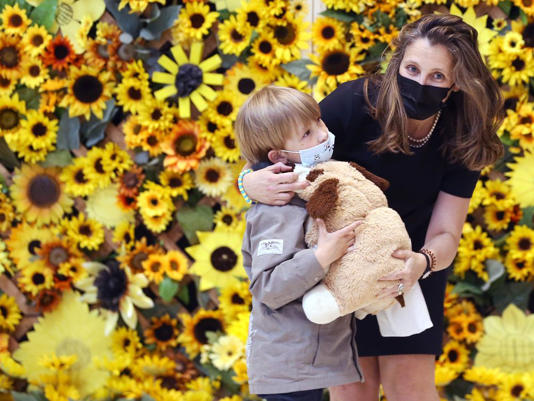 The first of three scheduled federal charter flight carrying 328 Ukrainians touched down at the Winnipeg James Armstrong Richardson International Airport around 3:45 p.m., May 23.

Freeland and Stefanson boarded the plane after it landed and were met with cheers and applause from the people on board, reported the Canadian Press.

Freeland gave her greetings in Ukrainian over the plane’s intercom system, while Stefanson thanked those on board for choosing Manitoba and Canada as their “home away from home.”

“We want you to know we welcome you with open arms and open hearts … we’ll do everything to make your stay a welcome stay,” she said.

Newcomers had another chance to speak with the two leaders as they departed the plane and picked up their luggage.

At one point Freeland hugged one emotional woman before she posed for a photo with the woman’s family.

“This has been a very emotional and moving day,” Freeland later told reporters.

“They’re here to take shelter but what they’re really waiting for is for Ukraine to win the war.”

Dogs, cats and even a hamster joined their owners in the more than 7,000-kilometre flight.

Onlookers and relatives cheered and applauded the newcomers as they made their way into the airport.

Anastasiia Seleznova was waiting patiently with a bouquet of flowers for her cousin, who she helped register to come to Canada. She says her cousin was put on a waitlist and they were only notified three days prior she would be on the flight.

“We believed that it (would) happen so we just hoped that things (would) work for us and it happened,” said Seleznova.

“In these difficult times and when it’s dark around you, you’re just trying to keep at least a light of hope.”

This wasn’t the first time Seleznova helped a family member escape. She met her nine-year-old sister in Poland in the middle of March to bring her to Winnipeg to stay with her.

The second charter flight will leave for Montreal from Poland on May 29 and the third, bound for Halifax, will take off on June 2.

Pavlo and Natalie Lebedev, who moved to Winnipeg from Kharkiv eight years ago, were waiting at the airport wearing Ukrainian flags and anxiously waiting for word the plane had touched down. 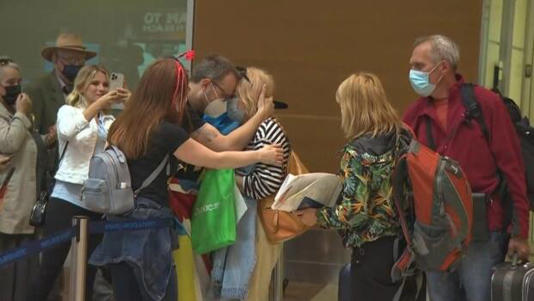 Pavlo Lebedev is reunited with his mother, who has fled the war in Ukraine

Pavlo’s mother and sister, who the couple hadn’t seen since they left, are on the flight. His sister was living near Kyiv when Russia invaded, and was surrounded by troops for over a month before being able to flee across the border.

After leaving Ukraine, they had been in Warsaw for over a month while waiting for their visas.

Natalie’s mother, sister, and niece arrived in Winnipeg a month ago. Her sister’s husband stayed in Ukraine.

The couple said they hadn’t been able to sleep or eat much since the beginning of the war, as they watched the news and waited anxiously for updates from family and friends.

While the Lebedevs’ families have familiar faces to welcome them to Winnipeg, many arrived today not knowing anyone.

A group of volunteers, many of whom immigrated here from Ukraine themselves, stepped in to offer translation and to help the refugees make their way to the hotel welcome centre.

Syvatoslav Furda came to Canada six years ago, and is volunteering through the Ukrainian Canadian Congress. 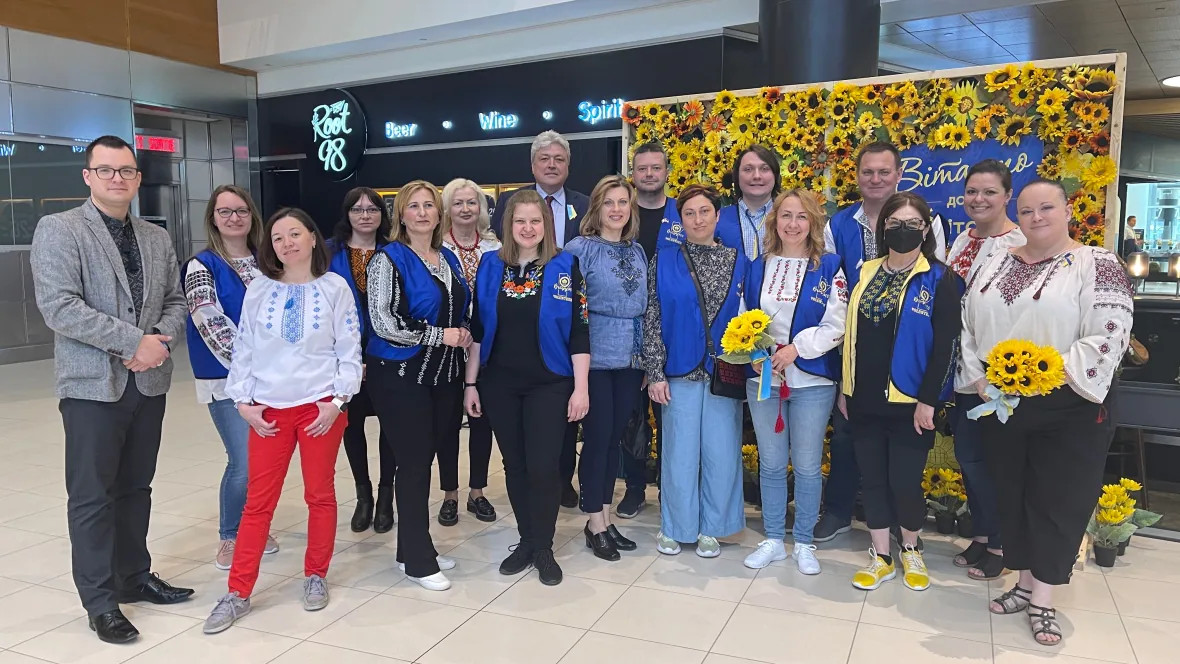 Volunteers have been making preparations for 350 Ukrainian newcomers to arrive in Winnipeg. Jérémie Bergeron/CBC

“Many people that are coming here, they do not have any family or anybody who will be able to assist them in more a family kind of matter. So for me, it’s really important to help them and give them this kind of understanding and feeling that they are welcome here and are like home,” Furda said.

When Mariana Sklepowich came to Canada, she was welcomed and accepted into a community with the help of volunteers. Today, she’s hoping to offer the same comfort and guidance.

“It’s important to just offer a little bit of a ray of hope, some comfort to the people who are coming here and seeking some refuge and safety,” Sklepowich said. While she feels a bit of excitement for the refugees to be arriving in a safe, welcoming community, she’s mindful of the journey they’ve gone through to get here.

“It’s been a really long journey and a difficult one full of potential trauma that the people arriving have experienced. So we are very sensitive to that. But we also want to make sure that they feel welcome with open arms when they arrive in Manitoba.”

Kseniia Zinenko arrived with eight other relatives including her mother, sister and son. She says her father and brother had to stay behind in Mykolaiv, a city in southern Ukraine, to fight in the army.

The family wanted to get as far away from Russia as possible and didn’t want to stay in Europe so they chose to move to Canada, said Zinenko. “It’s hard but we haven’t any choice,” she said.

About three hours after arriving, Zinenko boarded a bus that took her and her family to the provincial reception centre.