Zelenskyy pleads for a no-fly zone 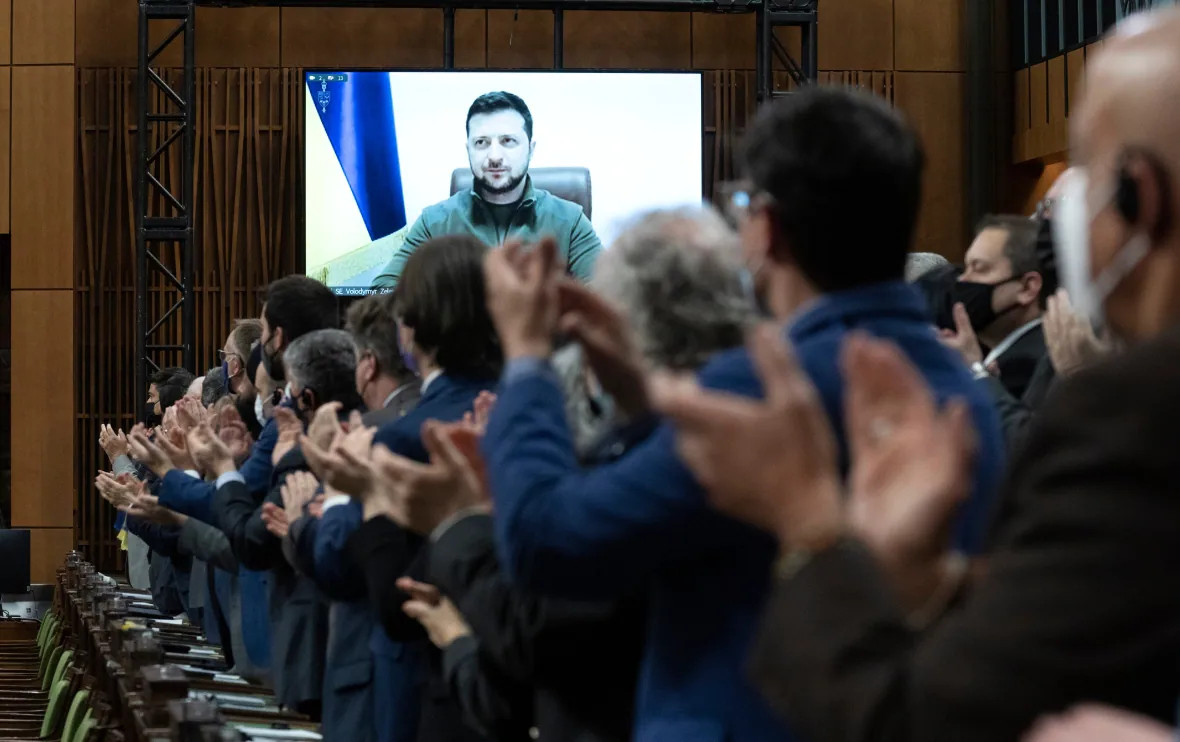 Ukrainian President Volodymyr Zelenskyy made an impassioned plea for a no-fly-zone during a special session of Canada’s Parliament, March 15.

It was the same message he delivered the previous week to the British Parliament and the following day to the U.S. Congress.

“Can you imagine when you call your friends, your friendly nation, and you ask: ‘Please close the sky, close the airspace, please stop the bombing. How many more cruise missiles have to fall on our cities until you make this happen?’

“And they, in return, they express their deep concerns about the situation.

“When we talk with our partners, they say, ‘Please hold on, hold on a little longer.’

“Some people are talking about trying to avoid the escalation, and at the same time, in response to our aspiration to become members of NATO, we also do not hear a clear answer.

“Sometimes we don’t see obvious things. It’s dire straits, but it’s also allowed us to see who our real friends are over the last 20 days and as well, eight previous years,” he stated.

“Canada has always been steadfast in their support. You’ve been a reliable partner to Ukraine and Ukrainians, and I am sure this will continue. “You’ve offered your help, your assistance at our earliest request. You supply us with military assistance, with humanitarian assistance, you imposed serious sanctions.

“At the same time, we see unfortunately this did not bring an end to the war. You can see our cities like Kharkiv, Mariupol and many other cities are not protected, just like your cities are protected: Edmonton, Vancouver. You can see that Kyiv is being shelled and bombed. The city of Ivano Frankivsk: it used to be a very peaceful country, peaceful cities but now they’re being constantly bombarded.

Speaking by video link to a packed house at a special session of parliament, Zelenskyy, whose historic speech was interrupted by standing ovations several times including a three-minute one at the end, drove the message home to Canadians, asking them to imagine if such attacks on civilian targets happened in Canada.

“They bomb school buildings. They destroy kindergartens. Like in our city: city of Sumy, like in the city of Okhtyrka. Imagine that someone is laying siege to Vancouver. Can you just imagine for a second?…

“Can you imagine the famous CN Tower in Toronto if it was hit by Russian bombs? Of course, I don’t wish this on anyone, but this is our reality in which we live. We have to contemplate, we have to see where the next bombing will take place. We have a freedom square in the city of Kharkiv. Our Babyn Yar is the place where victims of the Holocaust have been buried, and today it was bombed by Russians.

“Imagine that Canadian facilities have been bombed similarly as our buildings and our memorial places are being bombed. A number of families have died. Every night is a horrible night.

“Russians are shelling from all kinds of artillery, from tanks. They’re hitting civilian infrastructure. They’re hitting big buildings. Can you imagine there is a fire starting at a nuclear power plant? That’s exactly what happened in our country,” he said.

The United States and NATO have consistently refused to establish a no-fly zone over Ukraine, arguing that it could draw western air forces into direct confrontation with Russia.

“We must do more together with our allies to secure Ukraine’s airspace. We need to protect as a minimum the airspace over the humanitarian corridors so that the Ukrainians can receive safe passage away from the war zone and to allow humanitarian relief to reach those areas under siege,” she said.

Bergen noted that while the images coming out of Ukraine are “heartbreaking and painful,” the courage shown by ordinary Ukrainians defending their homeland is inspiring.

“Putin’s brutal attack on Ukraine is an attack on all of us,” Bergen said. “That is the lesson history has taught us and one we cannot ignore.”

Bergen, Bloc Quebecois leader Yves-François Blanchet and NDP Leader Jagmeet Singh all called upon the Government of Canada to remove the obstacles to bringing refugees in from Ukraine.

Former Green Party leader Elizabeth May delivered an emotional address, citing a letter she had received from a Green supporter in Ukraine who pleaded with her to urge Canada to back a no-fly zone. She said it “broke my heart” to write back and say that such a move would risk a wider war, including the possibility of a nuclear confrontation.

“We must [use] every tool in front of us and I fear the tools we have are inadequate” to help Ukraine, May said before delivering a heart-rending appeal.

“President Zelenskyy, we do not want to let you down,” May said. “We fear we may inevitably let you down, but we will find every tool we can find and where there are not adequate tools, by God, let’s invent them.”

In introducing Zelenskyy to Parliament, Trudeau spoke about what the Ukrainian president’s leadership has meant to the world.

“Volodymyr, in the years I have known you, I have always thought of you as a champion for democracy and now democracies around the world are lucky to have you as our champion,” Trudeau said.

This was the third time a Ukrainian President had addressed Ukraine’s Parliament.