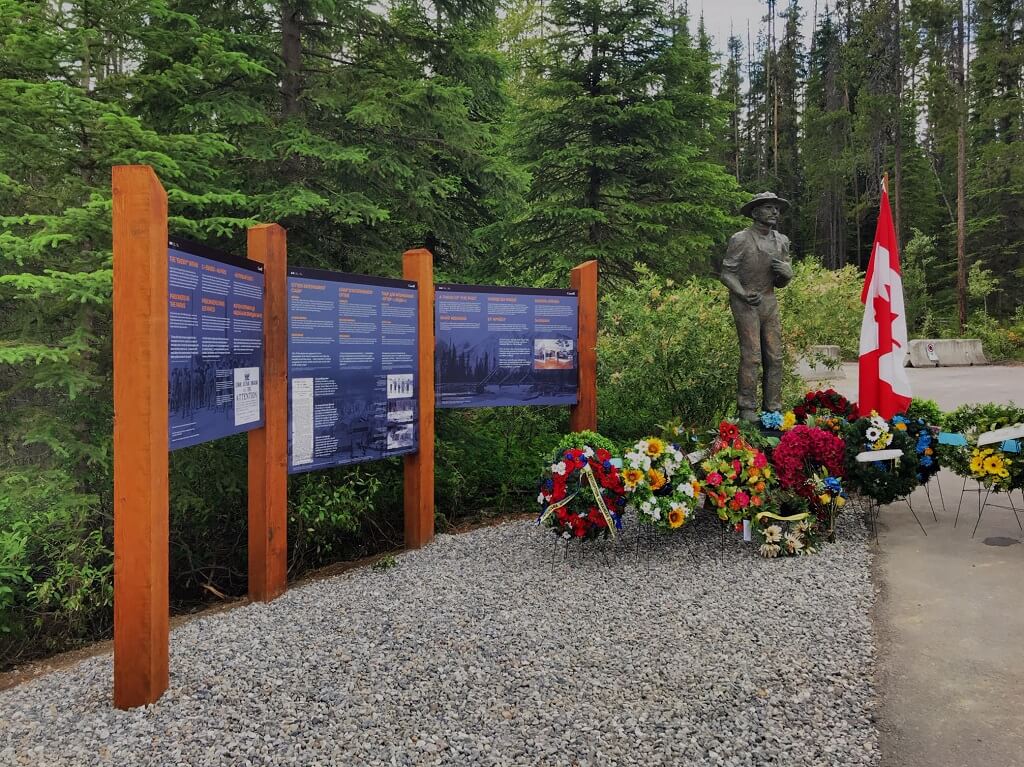 A trilingual educational plaque and commemorative statue were unveiled and consecrated Saturday, June 22, 2019, to the civilian internees held in Yoho National Park’s internment camp during the First World War.

More than 125 people from Calgary and the surrounding community in the British Columbia Interior attended the unveiling, near the Natural Bridge in the Park.

The UCCLA, in co-operation with Parks Canada, as well as with the support of the Ukrainian community of Calgary and the region, unveiled a trilingual (English, French, Ukrainian) plaque on the site where, from 1915 and 1916, some 200 men, mostly East and Central Europeans and mostly Ukrainians, were unjustly interned as enemy aliens under the War Measures Act.

“The UCCLA has, over the decades, been steadfast in its commitment to memorialize each and every ‘concentration camp’ created by the government of the day,” said UCCLA’s Borys Sydoruk. “With thanks today to the Endowment Council of the Canadian First World War Internment Recognition Fund, as well as Parks Canada, the statue and plaque consecrated in the heart of this country’s national parks system in Yoho means our work in permanently memorializing every site is ongoing, but successful.”

Some 90,000 civilians were part of the machinery of Canada’s first national internment operations from 1914 to 1920, whether they were arrested, interned, dispossessed of their wealth, made to work, or forced to regularly register with the police. Yoho was the site of one of 24 internment camps in Canada, which housed more than 8,000 men, and in some cases women and children, during the First World War and for two years following, simply for being born or for having parents who were born in what was then the Austro-Hungarian Empire.

The majority of those interned were Ukrainians, which were invited by the Dominion government to settle this country, and which the British government in London suggested were “friendly” aliens and recommended against interning. Canada went ahead anyway.

UCCLA worked collaboratively with the CFWWIRF and the Government of Canada to create the new exhibit after the previous on the same site required extensive upgrading.