One of the most fascinating places to visit in Winnipeg is the Shrine of Blessed Martyr Vasyl Velychkovsky.

Blessed Vasyl, who suffered over 40 years of persecution, including three terms of imprisonment, by the Soviet authorities, was finally released in 1972 and exiled from Ukraine.

Metropolitan Maxim Hermaniuk invited Bishop Vasyl to come to Winnipeg, in June, 1972. Overcome by the tortures and death causing drugs he received while in prison, he died a martyr’s death on June 30, 1973. After the funeral services in Sts. Vladimir and Olha Ukrainian Catholic Cathedral, he was buried on July 5 in All Saints Cemetery near Winnipeg.

He was beatified by Pope St. John Paul II along with 27 other martyrs of the Ukrainian Greek Catholic Church on June 27, 2001.

After beatification, preparations began for the exhumation and enshrinement of Blessed Vasyl’s holy relics. His holy body was exhumed on September 16, 2002. Following Vatican protocol, it was examined by a team of doctors and church personnel. His holy body was found to be fully intact with all its muscle mass.

It was “just like he was buried yesterday”, says Mary Jane Kalenchuk, Administrator of the shrine. “We were just in awe. We began with prayers and singing of hymns and the whole process began just like an autopsy… When I speak about this it still sends chills up my spine after all these years.”

The exception were his toes, which had fallen off due to frostbite incurred before death. They were subsequently divided to be used as holy relics.

His holy body was re-vested with new vestments and placed in a stainless-steel sarcophagus. On September 22, 2002, his holy relics were enshrined in a chapel in St. Joseph’s Ukrainian Catholic Church in Winnipeg. 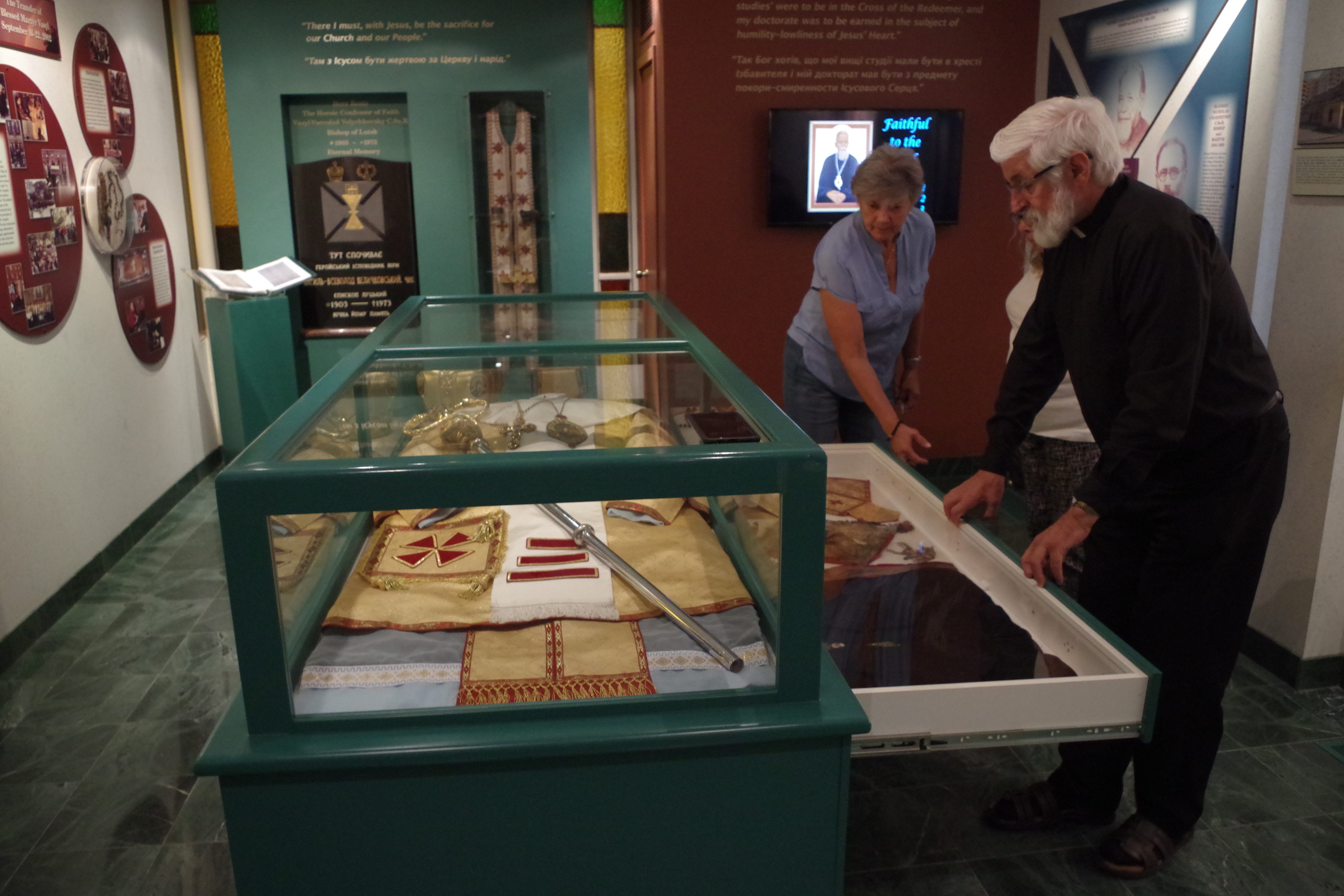 Father John Sianchuk, CSsR and Mary Jane Kalenchuk display some of the items inside the museum

Pilgrims come and pray before Blessed Vasyl, seeking his powerful intercession. Father John Sianchuk, CSsR, Director of the Shrine relates the case of one woman who had 10 lumps on her lungs and came to the shrine to pray. Later, during a biopsy, they were found to be benign. When operated on, they found nothing but scars and the doctor even asked her if she had already had surgery as no tumour was found. Today, she is still living.

Unfortunately, the medical records were lost in the hospital, thus there is no scientific proof of the miracle recovery, which is necessary for elevation to sainthood. “Her proof is her own words and her health,” says Fr. Sianchuk.

Another case is that of a five-year-old boy whose legs were crippled, but after prayer and anointing with the holy oil of Blessed Vasyl, came back to normal.

The shrine consists of two rooms – the Shrine Chapel and the museum.

The Shrine Chapel contains the holy relics, and the fully intact body of Blessed Martyr Vasyl. The chapel was constructed in 2002, designed by a local architect, Ben Wasylyshen. It is filled with symbolism and artwork which help the pilgrim enter into an atmosphere of prayer and into the presence of the holy.

The museum is dedicated to his life and that of other Redemptorist martyrs. Among some of the precious relics are a very small chalice that Blessed Vasyl used to administer Holy Communion. The reason it was made so small was so that it could be easily hidden from authorities.

There are also copies of three documents that Blessed Vasyl hid under a tree in Ukraine in 1967 and recovered in 2004.

One was from the Superior of the Basilian Fathers in Rome and the other two from Patriarch Cardinal Josyf Slipyj, which contained guidelines as to the operations of the underground church in Ukraine.

Right after his release from 18 years of Soviet labour camps in 1963, while enroute to Rome to attend the Second Vatican Council in Rome, Patriarch Slipyj called Blessed Vasyl to come to his hotel room in Moscow where he secretly ordained him as bishop. Bishop Vasyl returned to Lviv to do his episcopal work and a year later ordained Volodymyr Sternyuk, continuing the Apostolic Succession.

Relics are classified according to three classes – the first being his body itself, the second things that he used and the third being things that touched him.

One can become familiar with the life of this holy man through a presentation of a short video. Wall panels and display cases with artifacts complete the story of his life. Other walls in the museum depict the story of the exhumation and enshrinement of his Holy Relics.

A souvenir/gift shop completes this room. Books, holy cards, icons, candles and other items are available. 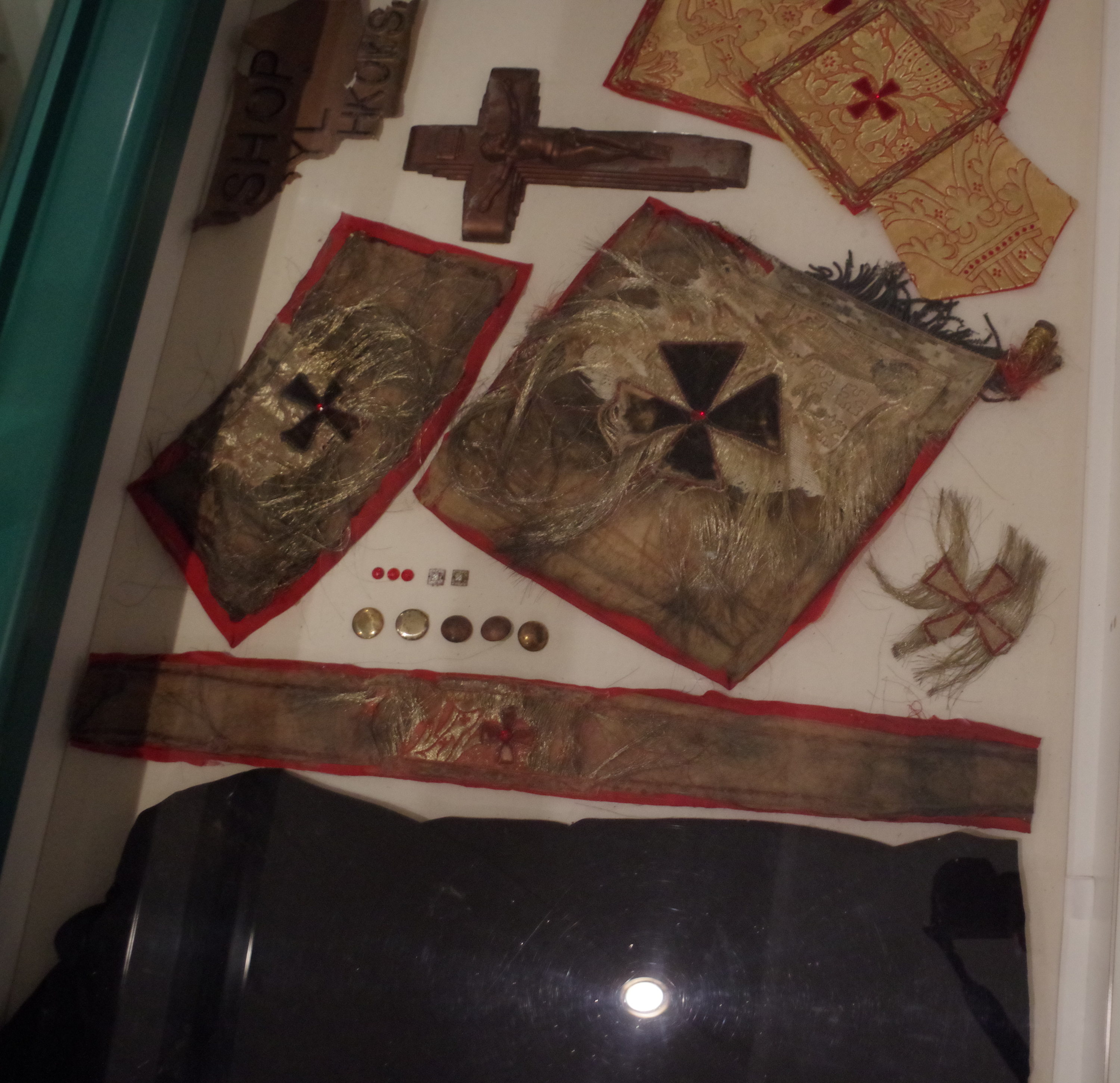 Some of the artifacts inside the museum

Blessed Vasyl was born into a priestly family in Stanislaviv, now called Ivano-Frankivsk, on June 1, 1903. In 1920 he entered the seminary in Lviv. In 1925 he took his first religious vows in the village of Holosko near Lviv in the Congregation of the Most Holy Redeemer (better known as the Redemptorists) and was ordained a priest.

As a priest-monk Vasyl Velychkovsky taught and preached in Volyn. In 1942 he became abbot of the monastery in Ternopil. Because of religious persecution by the Communist Soviet Union he was arrested in 1945 by the NKVD.

After one year of interrogations and tortures in the KGB prison in Kyiv, he was finally sentenced on June 26, 1946 to die by firing squad. He was on death row for three months. While in the cell with others on death row, he catechized them and prepared them through the sacraments for their coming death. When his name was called, he left the cell ready to die for Christ, but at that moment, his death sentence was commuted to ten years in Soviet labour camps.

He spent most of his years working in the coal mines of the Vorkuta region above the Arctic Circle. Accused of inciting a strike among the prisoners in the fall of 1953, he was transferred to a most severe prison in Vladimir, near Moscow. After protesting his innocence, he was sent back to Vorkuta.

When his prison sentence was completed, he was sent to Lviv. He became instrumental in organizing the underground church. His apartment became the centre of church activity: Divine Liturgies, administering the sacraments, catechesis, preparing seminarians, counseling and the like.

On January 27 of 1969, Bishop Vasyl was again arrested. He was accused of anti-Soviet agitation in a book he wrote on The Icon of the Mother of Perpetual Help, for listening to Vatican radio and for baptizing people. He was sentenced to a three-year prison term in Komunarsk in Eastern Ukraine. There he underwent chemical, physical and mental torture. The Soviets attempted to extract information from him about the underground church but were unsuccessful. They also administered drugs that were intended to slow his heart so it would appear that he died of natural causes. However, the people charged with administering these drugs injected them in between his armpits while pretending to insert them into his skin.

Nevertheless, by the time of his release, he was near death.

“After many years spent in prisons and labour camps, how pleasant it is to be free with my fellow Ukrainians. What joy to go to pray freely in a Ukrainian church, where no one will send you to the camps or prison because of your prayers. The prisons and camps ruined my health and my strength, but this was my fate, the Lord God placed this cross on my shoulders,” he stated in his final speech to the faithful in Canada, on June 17, 1973.

On July 20, 2014 during the All-Ukraine Pilgrimage to Zarvanytsia, Ukraine, Patriarch Sviatoslav solemnly proclaimed Blessed Vasyl to be the Patron of Prison Ministry for the Ukrainian Greek Catholic Church.

The Shrine of Blessed Martyr Vasyl Velychkovsky is located at: 250 Jefferson Avenue, Winnipeg, Manitoba, Canada R2V 0M6. Regular visiting hours are: Tuesday – Friday: 10:00AM – 5:00PM. Divine Liturgy is celebrated in the Shrine every Wednesday at 8:00 am. Acathist or Moleben in honour of Blessed Vasyl is celebrated every Wednesday at 7:00PM. Group tours can be arranged.