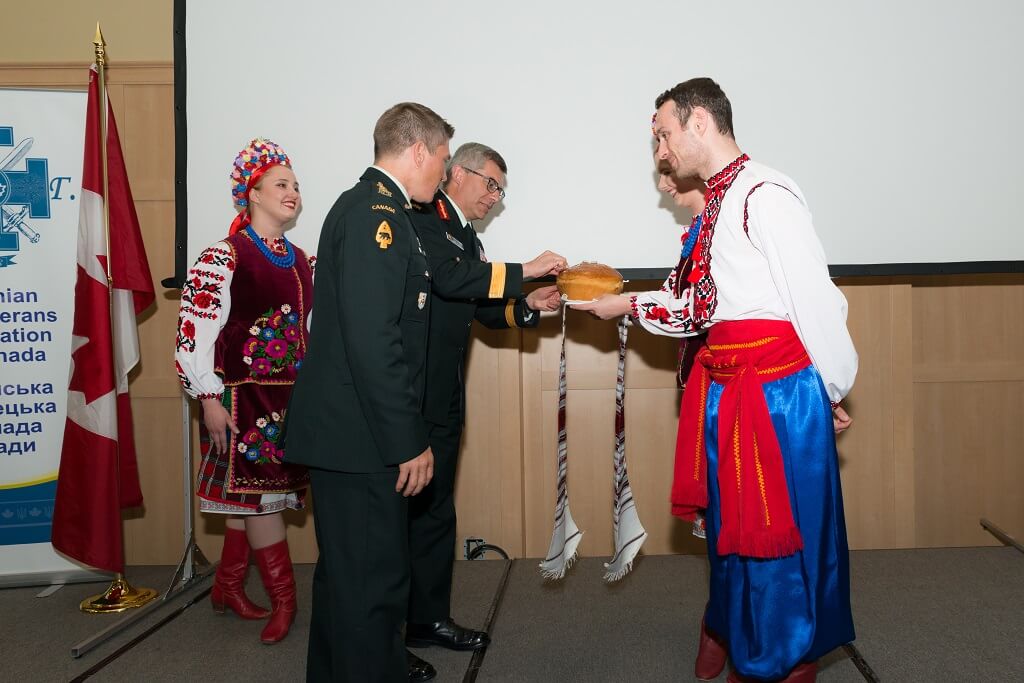 To recognize the hard work of the Canadian Armed Forces in their help to Ukraine and their support to NATO, the Ukrainian War Veterans Association of Canada hosted an annual Canadian Forces Appreciation Event at Trident Banquet Hall on Friday, June 1st. The evening honoured and thanked the Canadian Army for its contributions to Ukraine under the auspices of Operation Unifier – the Canadian military’s capacity building and mentoring mission in Ukraine, working towards stability in Eastern Europe.

The evening’s audience found out about the Operation’s progress, heard first-hand accounts of the mission, and learned how it has evolved from its original conception in 2015. The speakers also told the audience how the mission is helping the Canadian Armed Forces to prepare for a new type of warfare, like the one that Russia is leading in Ukraine. As Capt (Retd) Andre Sochaniwsky CD noted, “Operation Unifier is important not only to Ukraine and Eastern Europe, but to Canada and other states that respect the international rule of law”.

The second guest of honour was Lieutenant-Colonel Kris Reeves CD, Commanding Officer of the 3rd Battalion, The Royal Canadian Regiment. LCol Reeves is the former Canadian Commander of Operation Unifier. He shared his experiences and observations of the mission: “It started with a small group of soldiers and worked outwards into larger bases and moved from a tactical scenario of what we were doing – direct training – working on training institutions and helping the Ukrainians to change their approach to training to make them more effective.” LCol Reeves called the Operation “an incredibly powerful experience for all of us” and stressed that the mission helped not only the Ukrainian military to become better, but also made the Canadian soldiers better too: “We are better soldiers, we are better Canadians and we are just better people”.

Upon greeting the Ukrainian Canadian community and honoring the Canadian Armed Forces, Liberal MP James Maloney delivered the address of the Prime Minister Justin Trudeau, which recognized that “through missions such as Operation Unifier, the CAF is helping to ensure that Ukraine remains sovereign, secure and stable. It is a vital operation that ensures the advancement and protection of democracy, human rights and the rule of law.” Maloney was joined by Borys Wrzesnewskyj, who reminded the community of the importance of Operation Unifier. He reflected on the address of the Secretary General Jens Stoltenberg to the NATO Parliamentary Assembly, in which Stoltenberg recognized the importance of Canadian military’s contributions to the security in Europe: “This mission should be considered equal to all of the other [NATO] missions because today Ukraine’s soldiers are a shield for NATO and the NATO countries.”

Conservative MP James Bezan reiterated Canada’s current help to Ukraine, specifically the addition of Ukraine to Automatic Firearms Country Control List, which allows shipping of Canadian-made weapons to assist the Ukrainian military in war against the aggressor. He said that a future Conservative government would take the weapons that are currently in storage and were destined for the Kurdish Peshmerga and give them to Ukraine; this includes sniper rifles, pistols, grenade launchers, mortar systems and anti-tank missiles. These promises were greeted with a round of applause and cheers from the Ukrainian audience.

Ted Opitz, a retired Canadian Forces Lieutenant-Colonel and a former Conservative MP for Etobicoke Centre, lauded the bravery of the Ukrainian soldiers on the front lines: “Our military is training the Ukrainian military tremendous fighting skills, organization, NATO standards. But one thing that you cannot teach the Ukrainian soldier – male and female – is courage. They are absolutely courageous in standing up to Vladimir Putin.” He pointed out that Ukraine is doing an immense favour to the West by “tying up” Vladimir Putin in the East. With the aid from the Canadian Armed Forces and their contributions, Ukraine can do a better job at being the shield for the rest of Europe.

Other distinguished guests of the evening included:

UWVA President Captain (Retd) Andre Sochaniwsky CD discussed how Operation Unifier provides Canadian Army with a unique opportunity to learn about a new type of hybrid warfare and threats from Russia. He encouraged the Canadian government to continue to support this mission beyond 2019, which is when the mission is set to expire. He also spoke about the renewed mission of UWVA in the context of Ukraine’s current struggles with the Russian aggressor: “With brutal combat operations taking place in Ukraine for the first time since the Second World War, and the Canadian Armed Forces playing an active role to build and renew Ukraine’s military capabilities and supporting NATO allies in Eastern Europe, the UWVA has begun to channel its efforts in fostering relationships between the Canadian and Ukrainian militaries, and the Ukrainian Canadian community.”