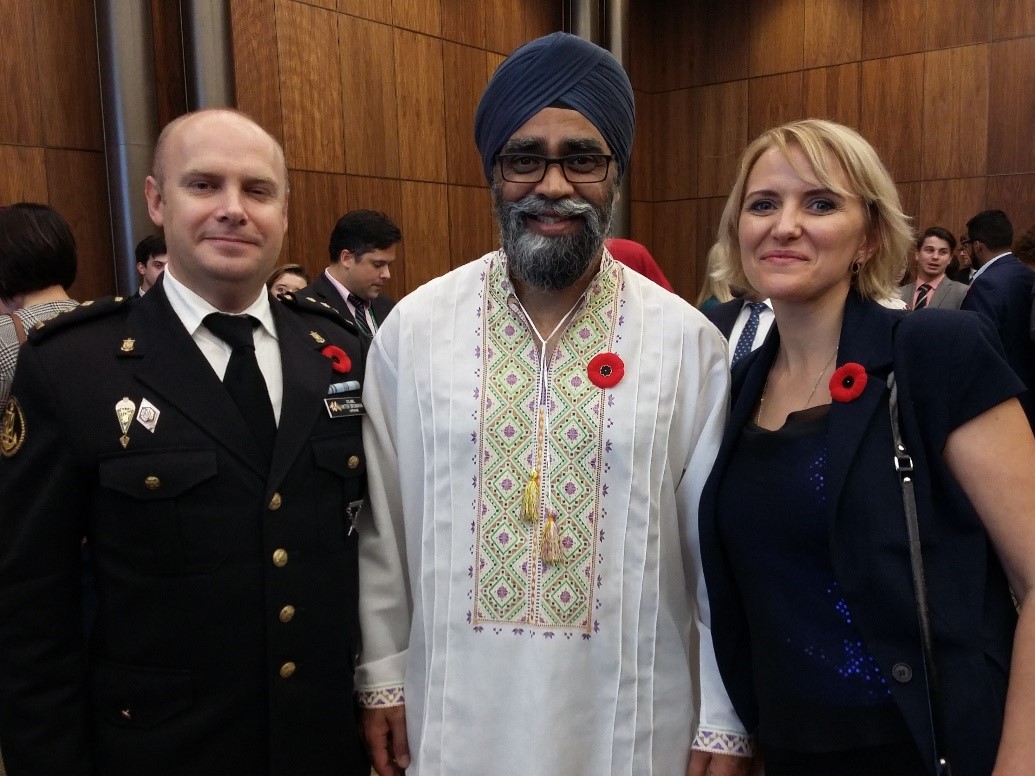 This past April, the President of the Ukrainian War Veterans Association of Canada (Українська Стрілецька Громада Канади), Andre Sochaniwsky, visited Ottawa to bid farewell to the long serving Defence Attaché of Ukraine to Canada, Colonel Viktor Siromakha. The UWVA has enjoyed a very positive and productive relationship with Col Siromakha over his 6-year term and wanted to thank him personally for his service in Canada and wish him well on his impending return to Ukraine.

Col Siromakha first arrived in Ottawa in 2016 initially as Military Attaché, after Ukraine had already been at war with Russia for two years. He quickly got to work with then Ukraine’s Ambassador to Canada, Andriy Shevchenko,  on forging relationships with Canadian defence officials to defend, train and equip Ukraine. By 2017, Col Siromakha was elevated to the position of Defence, Naval and Air Attaché of Ukraine to Canada, the position he holds today. Serving as Defence Attaché during wartime and then with the added complexity of a global pandemic and more recently the violent re-launch of the Russian invasion, is no simple feat but a role in which Col Siromakha embraced and excelled. Col Siromakha is a new and modern breed of Ukrainian military officer. Educated and trained in post-Soviet era Ukraine, and not in the former Soviet republics under Russian “tutelage”. He is a graduate of the Kyiv Land Forces Military School, National Defence University and Ukrainian State University of Finance and Foreign Trade – all in Kyiv. He speaks 4 languages fluently, including English and French. Prior to coming to Canada, he deployed on dangerous international operations in Africa where he worked closely with foreign militaries and government organizations. While diligently carrying out his military duties, he helped elevate Ukraine as a worthy international partner and contributor to world peace and stability. 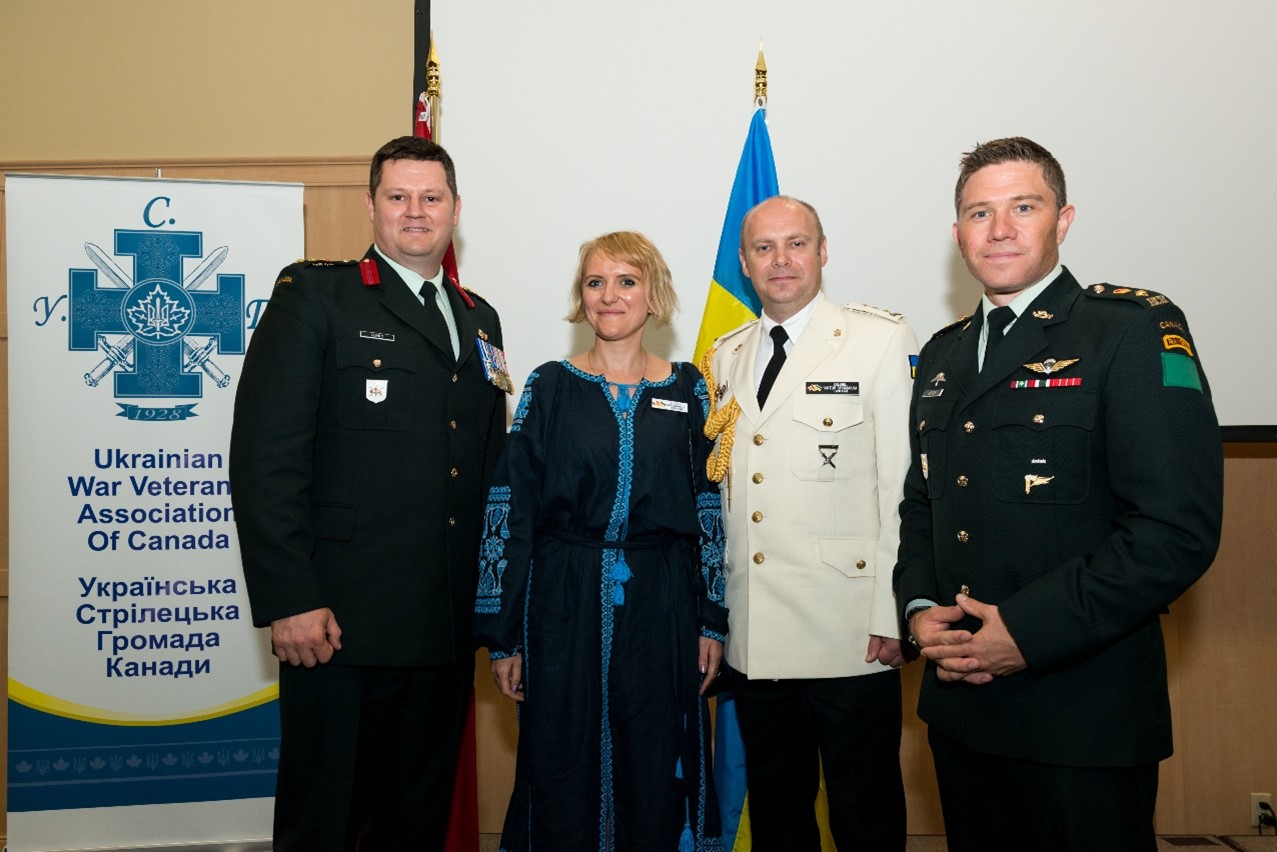 His work in Canada would, no doubt, prove to be his most impactful to Ukraine to date. Colonel Siromakha focused on the security of Ukraine by organizing and coordinating defense-related initiatives with Canadian defence department and industry representatives. In April 2017, the Canadian government signed a defence cooperation agreement with the government of Ukraine. This bilateral agreement identified areas of mutual cooperation including defence policy, defence research, development and production, and military education. This framework is in use today facilitating the movement of military resources and services between Canada and Ukraine, including the recent dispatch of Canadian artillery to Ukraine.

Colonel Siromakha also took great strides to thank and encourage Canada for its contribution in training Ukraine’s armed forces under the auspices of Operation UNIFIER, an operation that has had a very positive impact on Ukraine being able to defend and repel attacks from its much larger aggressor. He took the time to meet with every UNIFIER rotation prior to departing for Ukraine and upon its arrival in Canada. He thanked all the UNIFIER commanders and their troops at military bases across Canada. He witnessed how the training evolved from rudimentary skills training to mores sophisticated and specialized training that his brothers and sisters in arms would benefit from on the battlefield. He and his spouse were also present at the widely attended UWVA-sponsored UNIFIER Appreciation Event in 2018, where a large contingent of Canadian soldiers from Garrison Petawawa that had recently returned from Ukraine were hosted and honoured.

Col Siromakha also recalled the Invictus Games and the visit of then President Petro Poroshenko to Toronto in September 2017. The Invictus Games are an international sports competition for wounded soldiers, and this was the first time that they were held in Canada and the first time that a Ukrainian team participated. The Ukrainian team performed admirably, and Canadians were able to see the indominable fighting spirit of Ukraine’s male and female soldiers and veterans. 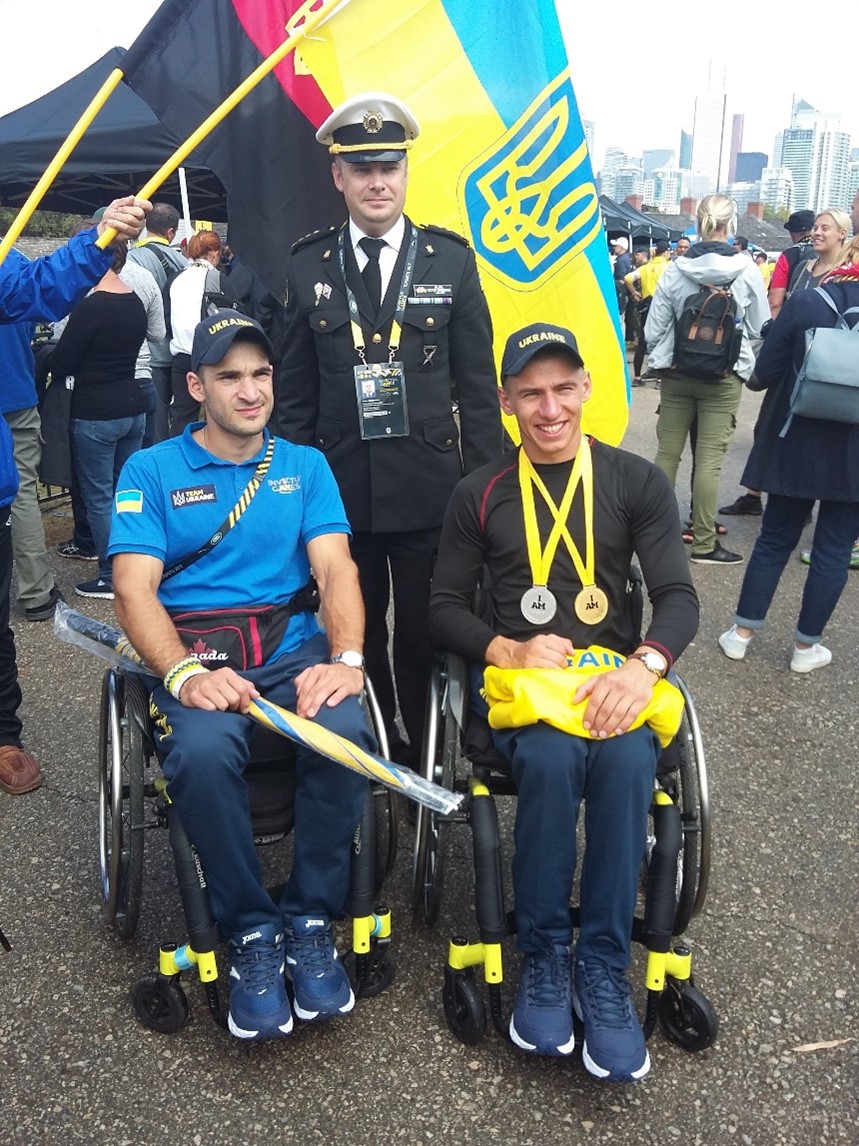 Col Siromakha stands with 2 Ukrainian participants in the Invictus Games in Toronto in 2017. Photo courtesy of Victor Siromakha.

The Attaché also recollected his introduction to the Canadian Book of Remembrance at the Memorial Chamber on Parliament Hill, where the names of more than 120,000 Canadians who have given their lives in the service of their country are inscribed. This was a very moving experience for Colonel Siromakha which ultimately led him to recommend a similar model for Ukraine. In 2018, Ukraine opened its “Hall of Memory” («Зала пам'яті»), a memorial complex at the Ministry of Defense of Ukraine that honours the fallen servicemen and servicewomen of the Armed Forces of Ukraine, as well as volunteers who died in the defence of Ukraine.

In his parting words, Colonel Siromakha applauded Canada as a country that protects individual freedoms and encourages living to one’s full potential and ambition. This is a value for which Ukraine is currently fighting and will succeed in achieving. He was very grateful to Canada for supporting Ukraine and supplying both lethal and non-lethal resources. He was very thankful to Canada’s armed forces for helping train and mentor Ukraine’s military and bringing them closer to a modern and effective fighting force, and in the opinion of the author, to become one of the most lethal and disciplined armies in the world today. The UWVA wishes Colonel Siromakha and his family well and a safe return to Ukraine.