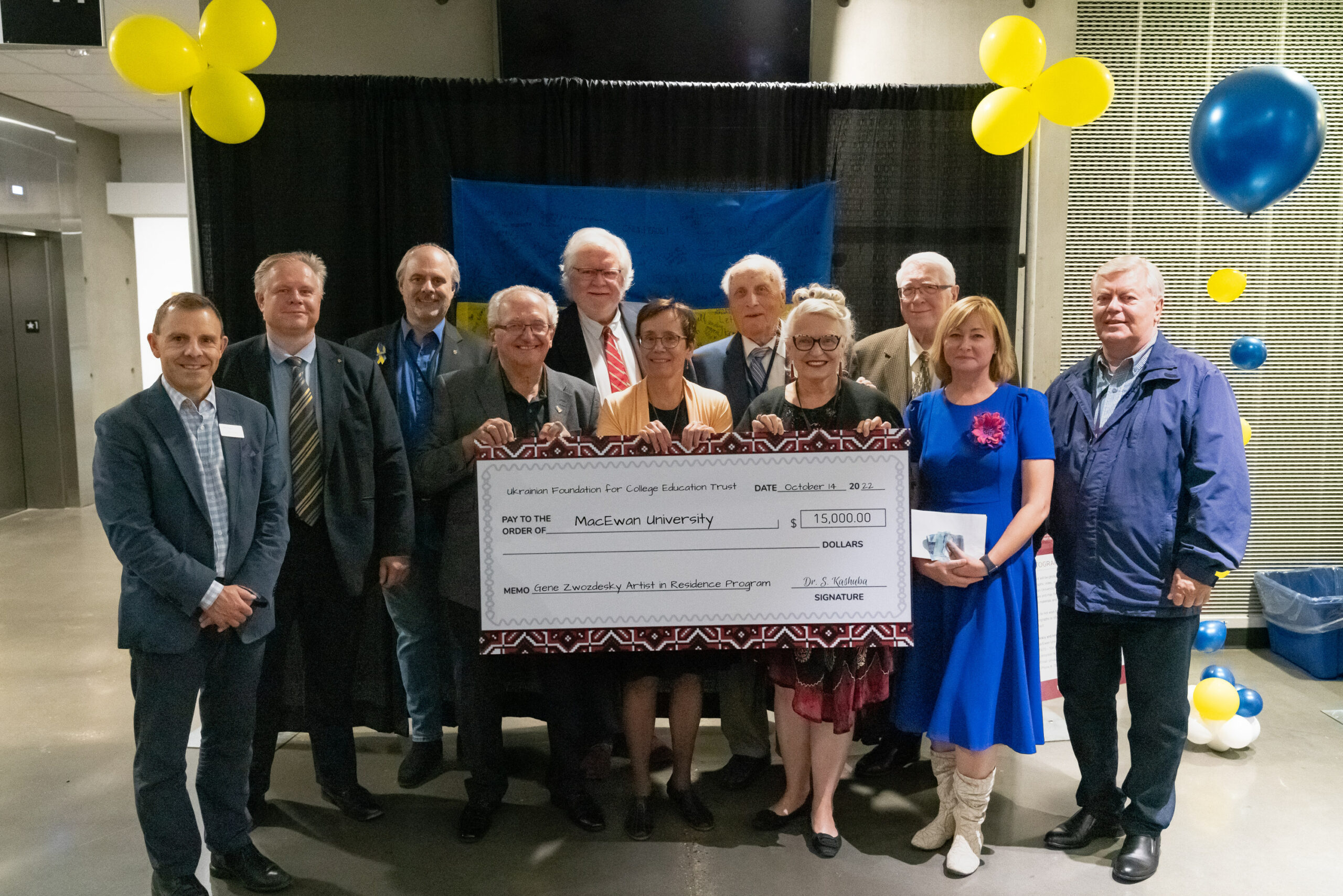 Some of the participants at the ceremony during the cheque presentation

Grant MacEwan University has honored former Speaker of the Alberta Legislature Gene Zwozdesky by creating an artist in residence program in his name.

The Gene Zwozdesky Artist in Residence Program will be based in the Faculty of Fine Arts and Communications, with support from the Ukrainian Resources and Development Centre (URDC), and funding from the Ukrainian Foundation for College Education (UFCE).

The UFCE Trust will contribute $75,000 over five years.

The program will bring world-class Ukrainian or Ukrainian Canadian artists to campus for 1-3-month long residences.

The artists will have the opportunity to develop artistic practice, create opportunities to engage students and collaborate with MacEwan faculty and Ukrainian Canadian communities.

“I am so delighted to be able to announce this project,” said Dr. Annette Trimbee, President and Vice-Chancellor of MacEwan University at the celebration commemorating the 35th anniversary of the URDC in Edmonton, October 14.

“Gene is renowned for his advocacy of Ukrainian Canadians, their contribution to the development of Alberta, and for building a strong relationship with Ukraine today.

“I was a Deputy Minister when the Honorable Ed Stelmach was Premier and got to know the Honorable Gene Zwozdesky well. Gene was always very kind, and passionate about his work. The public service loved working with him.

“Gene was a friend to MacEwan.

“He advocated MacEwan’s participation in provincial trade delegations to Ukraine.

“And was instrumental in bringing URDC’s expertise to the creation of the Ukrainian Famine and Genocide Memorial Day Act,” she added.

“Gene’s pursuit of enabling education (especially in arts) and leadership is perfectly encapsulated by this program A legacy of enriching the arts through education is perhaps the perfect way to remember (him). And we have been often times overwhelmed by the love he has received from the community,” he added.

Dr. Roman Petryshyn, Founder and the first Director of the Ukrainian Resource and Development Centre, highlighted some of the key accomplishments of the URDC during its 35 years.

First established in 1987, the URDC fund itself with a unique opportunity when Ukraine became independent in 1991.

“Although URDC only had two staff, project applications were submitted to major donors and URDC attracted about $5 million from external sources to undertake large projects, in partnership with various universities and community organizations,” said Dr. Petryshyn.
He listed some selected examples of results achieved:

• In the mid-1990s URDC worked in partnership with the International School of Business in Kyiv for ten years in delivering a two-year Business management program. It was attended by 300 students, with over 60 from Ukraine doing their practicum placements at businesses in Edmonton.
• MacEwan’s Faculty of Nursing with funds from the community arranged for translation into Ukrainian of over 3,500 pages, as well as voice overs for 17 nursing curriculum videos, and distributed to three dozen nursing schools in Ukraine. Eventually this work led to the establishment of the Chair of International Health Research endowment of $1.0 million that today funds a MacEwan partnership with Ternopil State Medical University.
• URDC and its Winnipeg partners received substantial Federal government funding for a five- year program to introduce Inclusive Education to Ukraine. This produced translated and many Ukrainian textbooks on inclusion and led the Ministry of Education and Science to set up inclusive education schools throughout Ukraine affecting thousands of children with disabilities.

In more recent years the following initiatives have been undertaken at URDC:
• Ternopil National Medical University established a MacEwan Nursing Simulation Lab, as result of the MacEwan’s Kule’s Technology Fund. Joint Nursing faculty from MacEwan and Ternopil National Medical University have cooperated in developing a course on Global Health delivered both online and in person through international exchanges.
• Endowment revenues fund research related to Ukraine and is underway in MacEwan’s Sociology and Nursing departments and have translated and published the well-known Research Methods by Creswell which was not previously available in Ukraine.
URDC also has active Visiting Scholars program. Using these resources:
• MacEwan’s “Canada-Ukraine Model United Nations program” brings political science students from MacEwan and Ukrainian university partners together to learn about UN procedures and jointly participate in international conferences. As a result of this project, a new political science course was developed, faculty and students presented at the international education conferences, and the Model UN relationships grew to include universities in Germany and Spain.
• In Alberta, URDC established an innovated Ukrainian-Indigenous program of dialogue as part of Canada’s program of reconciliation with Indigenous nations.
• And most recently, MacEwan‘s Faculty of Fine Arts and Communication has established a working relationship with the Lviv National Music Academy named after composer Mykola Lysenko. This initiative was one that former Speaker of the Alberta Legislature, Gene Zwozdesky, was involved in getting off the ground.

Russia’s aggression this year has turned the attention of the entire world to defending Ukraine against the invasion, noted Dr. Petryshyn.

“URDC’s role has become more important than ever both in Canada and Ukraine — with regard to the treatment of its Indigenous and Ukrainian Canadian community – and — in helping Canadian faculty members and students better understand Ukraine and Eastern Europe and their historical conflicts with Russian autocracy.

“There is a need to expand MacEwan’s involvement both in Ukrainian Canadian and Eastern European research, programs, courses, publications and conferences to better inform Canadian students and the public,” he added.

But this can only be accomplished if additional funds are found from government, business and community donors.

“We have an opportunity for both the MacEwan Foundation and the Ukrainian Foundation for College Education to develop a joint strategic fundraising plan and to fundraise together under the concept of community-university engagement.

“The time is right for MacEwan and URDC to work together to enhance URDC’s resources in both Ukrainian Canadian and Eastern European studies as a MacEwan University priority. When the message is well planned and well delivered, I believe that the people of Alberta will support our appeal,” Dr. Petryshyn said.

Speaking on behalf of the Government of Ukraine, Oleksandr Danyleiko, Consul-General of Ukraine in Edmonton stressed the need for education, particularly now when “Russians would like and want to destroy us as a nation.”

“We are fighting not only for Ukraine. We are fighting for all of Europe, for the whole world. Because if we don’t stop Putin now, he will go further. He will invade other countries in Europe and… he will bring the world to the edge of a planetary disaster,” he added.

MC Stephanie Nedoshytko said that since the beginning of the Russian full-scale invasion, the URDC has become a hub for students, faculty, and staff to provide information, develop resources and keep the University and wider community engaged and focused on Ukraine.

“URDC led and supported numerous initiatives, including weekly campus forums, joint online course developments and research studies with Ukrainian partners. As part of the Canada Ukraine Model United Nations project, URDC supported the Ukraine team to participate in the world largest Model UN simulation in New York, bringing the Voice of Ukrainian Resilience to the 4,000-student conference. URDC, thanks to generous donation from the Ukrainian Foundation for College Education, offered financial bursaries to 20 students from Ukraine.

“Furthermore, URDC brought MacEwan and community educational experts to offer free English classes, when the urgency was identified. When laptops were needed, MacEwan university made a decision to donate 50+ computers to the Ukrainian Canadian Social Services in Edmonton. When lack of information resources for newcomers became apparent, URDC provided support to UCC-APC and developed the Ukrainian English Language Guide,” she added.

During the ceremony, participants were entertained by singer Nadia Konon. 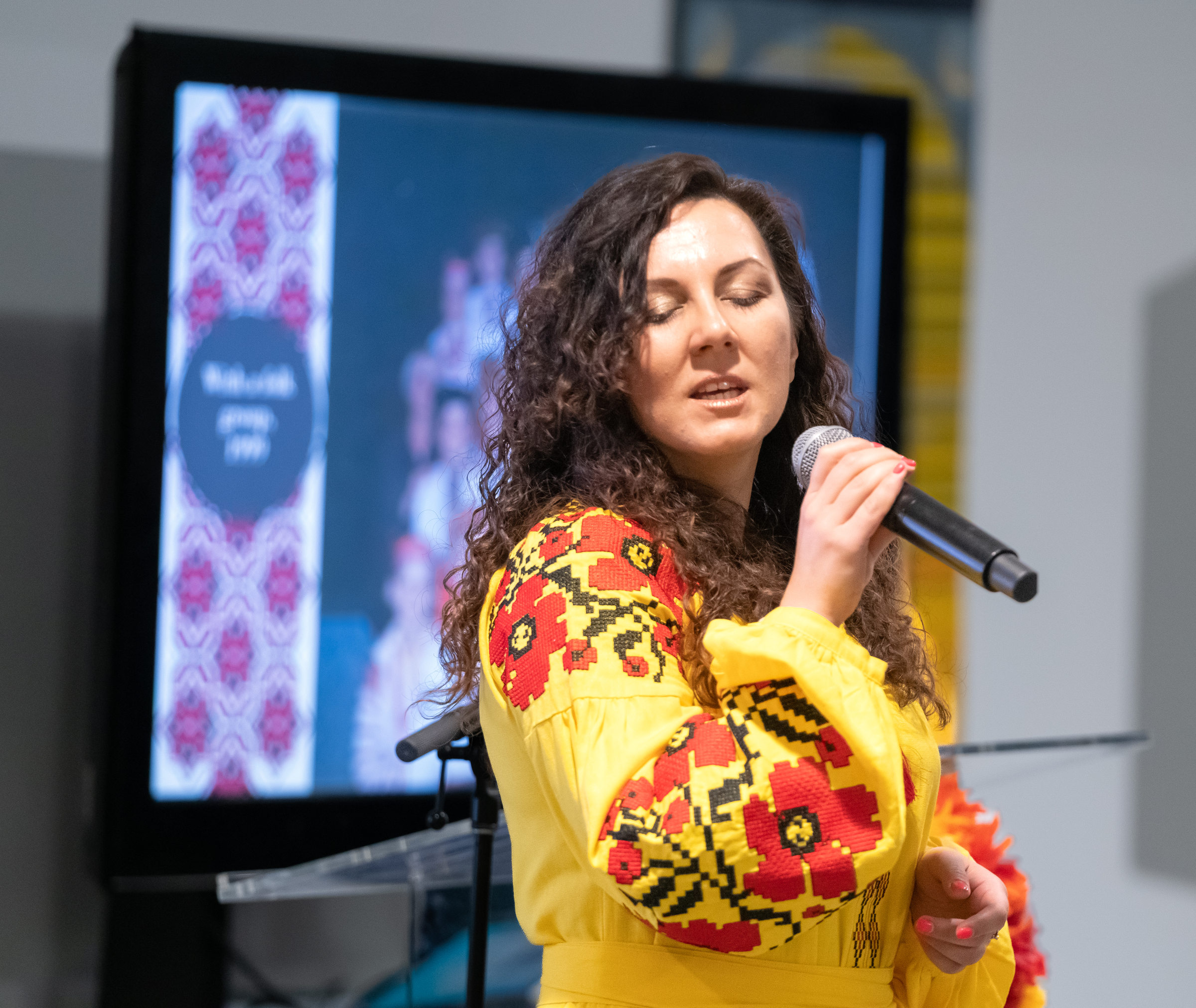 Afterwards they were treated to a benefit concert performed by renowned jazz pianist John Stetch. 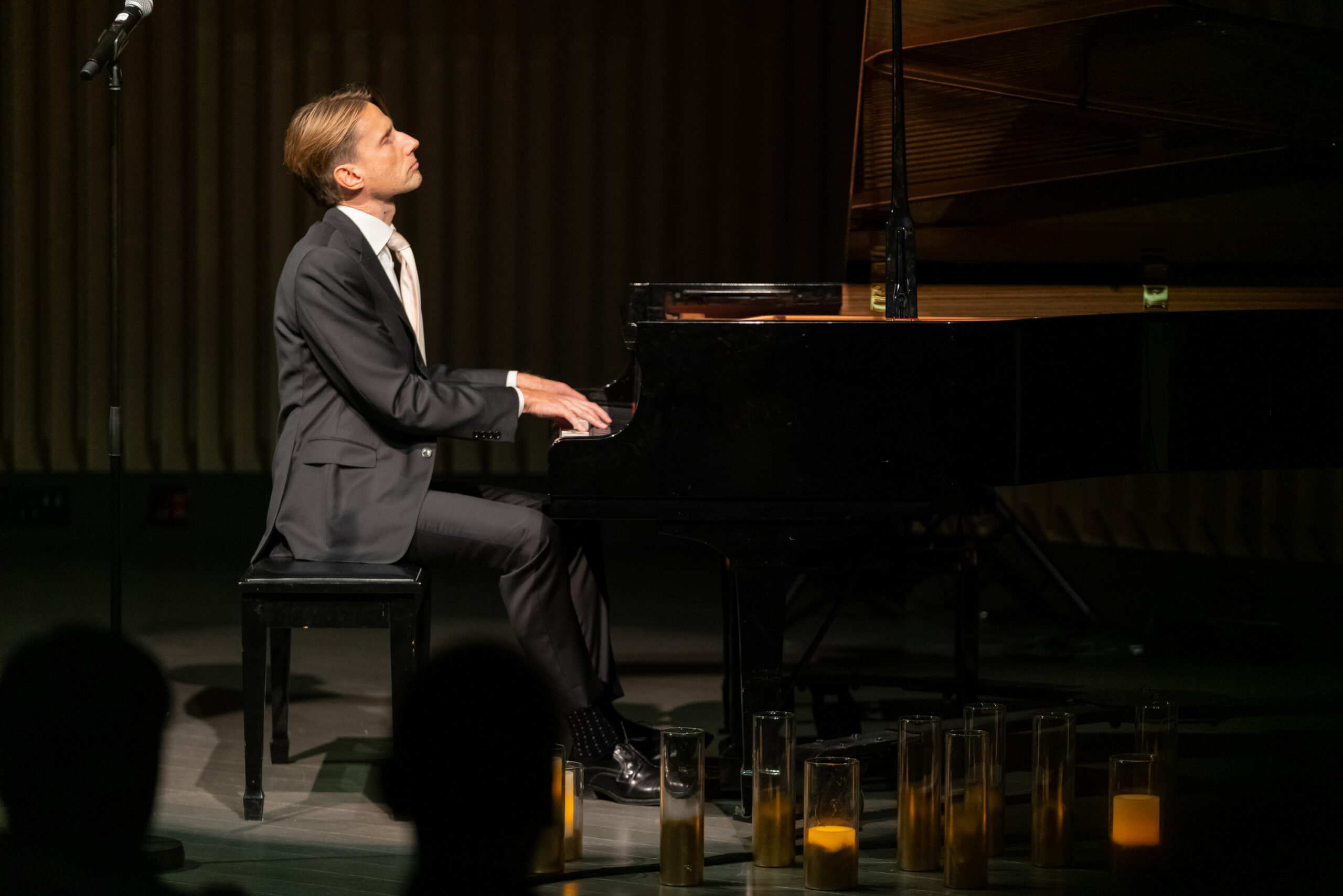