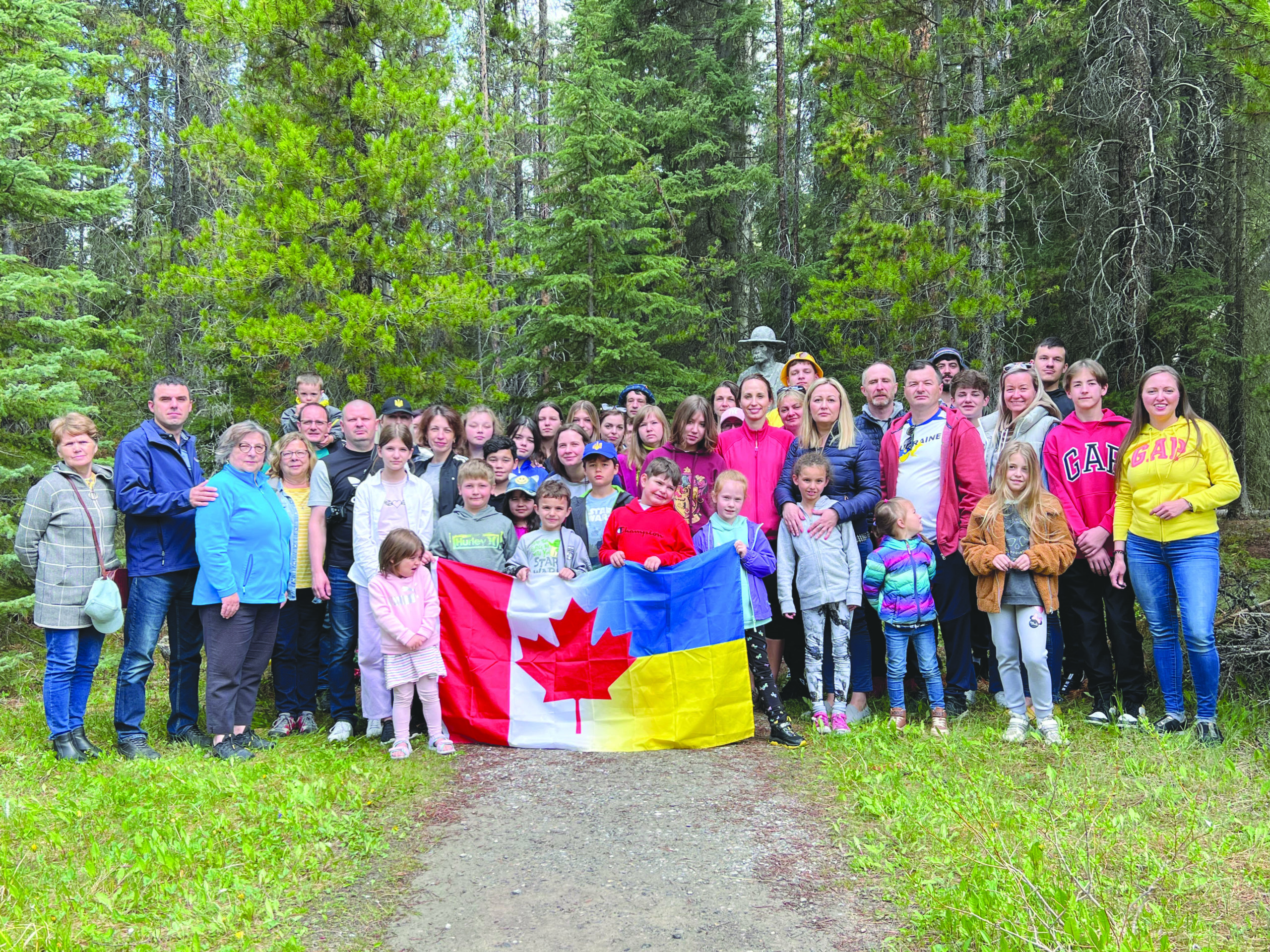 At the Castle Mountain Internment site. The monument honouring internees is just behind the tour participants. Photo: Yulianna Voloshyna

For Mariia Seniw, setting out on a bus trip to the Rockies just two days after arriving in Canada, was quite an eye-opener.

“In Ukraine we have mountains, the Carpathians, but compared with the Canadians ones it just can’t be compared. Because here the mountains are rocky and high, the trees are also high unlike the ones I’ve seen in the Carpathians. And the lakes and rivers that are truly a wonder of nature… like I’ve never seen in my life,” she said speaking in Ukrainian.

Seniw came from Ivano Frankivsk to join her daughter Iryna Lytvynets under the Canada-Ukraine Authorization for Emergency Travel (CUAET) program.

She recalls the bombing they suffered:

“At first we all hid. We ran to the bomb shelter. But with time we got used to it and we would hide in the rooms in the apartments and look for other places … to be better defended.”

The Edmonton Branch of the Ukrainian National Federation invited several recent arrivals to join them on their visit to Canmore in the Rockies, June 10-12.

UNF Edmonton usually organizes an annual outing, but this one was two years in the waiting as it had to be cancelled twice due to Covid, explained Past President and trip organizer Andriy Lytvynets.

The trip included stopovers in Peyto Lake; Abraham Lake; Bow Lake; Morain Lake; the Castle Mountain site of the camp where Ukrainian nationals were interned during World War I; the Cave and Basin in Banff, which was built by interned Ukrainians; and the Canmore Nordic Centre Provincial Park, which was developed to host the cross-country ski events of the 1988 Olympic Winter Games, and is now one of the few operational Olympic Nordic Skiing venues in the world.

Visitors from Alberta, across Canada and around the world come to Canmore Nordic Centre to enjoy extensive recreational ski trails, participate in and be spectators at world-class events.

Spending two nights in Canmore, UNF members joined in a spontaneous sing-along on the evening of June 11 to the guitar accompaniment of executive member Marco Levytsky. 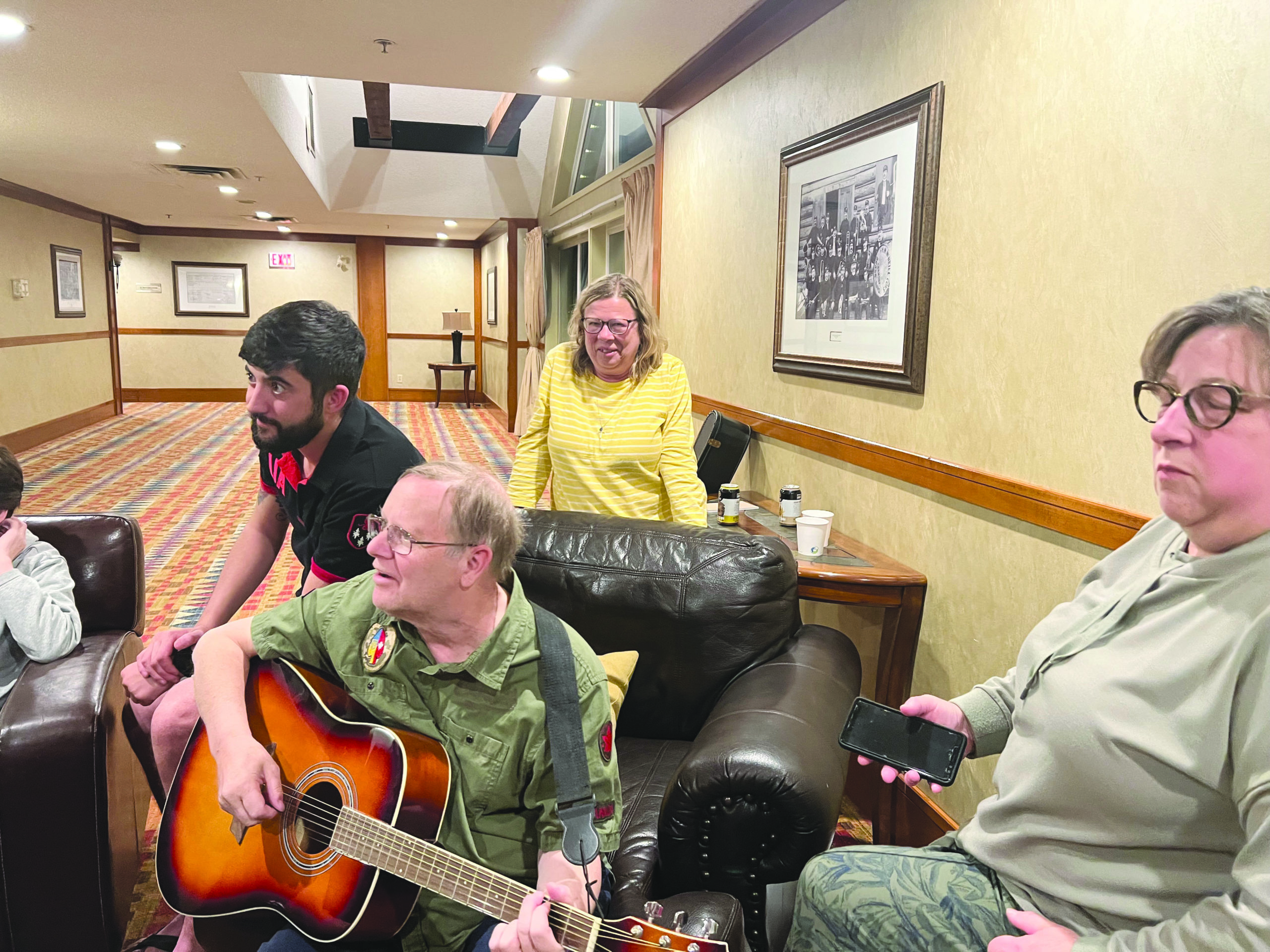 Marco Levytsky provided the accompaniment for the sing-a-long

Yulianna Voloshyna, Director of the Ukrainian Program on World FM recorded some of the numbers and broadcast them on her show under the name of “Nasha Hrupa”.

All in all, it was a very satisfying weekend for the refugees.

“Canada is very wonderful and can’t be compared with other countries… I feel a warmth in Canada and don’t feel like I am in a foreign country,” said Iryna Yavorska, another recent arrival from Ukraine, describing her impressions.