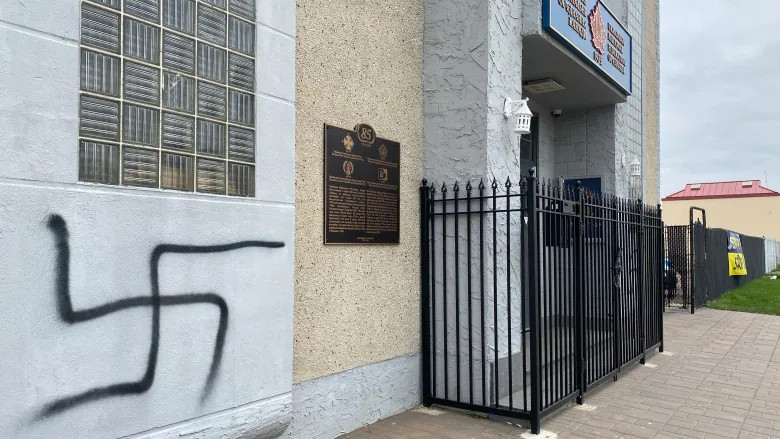 Swastika on the wall of the UNF building in Edmonton

UCC to call upon government to investigate anti-Ukrainian hate crimes

The Ukrainian Canadian Congress will be calling upon Public Safety Minister—- to investigate a series of hate crimes perpetrated against members of the Ukrainian community in Canada after the most recent incident in which the Ukrainian National Federation building in Edmonton was vandalized with spray-painted swastikas, May 13.

Speaking with leaders of Edmonton’s Ukrainian community at a breakfast meeting held at the Chateau Louis Conference Centre the following day, UCC National President Alexandra Chyczij said the incident was disturbing to all of us because it’s not the first time something like this happened in Edmonton or elsewhere across Canada.

“And the incidents are beginning to get increasingly violent,” she added.

As examples, Chyczij cited the April 20 arson attack on the home of Father Yuriy Vyshnevskyy, pastor for St. Nicholas Ukrainian Catholic Church in Victoria while the family was still inside the house and the assault on Ukrainian demonstrators by Russian-speaking thugs at the March 9 Edmonton Oilers-Washington Capital game at Rogers Place in Edmonton

“In Toronto we’ve had incidents of violence were people stopped cars with Ukrainian flags and smashed in their windshields when children were sitting in the back seat,” she added.

“This isn’t fun and games anymore. This isn’t just a little bit of vandalism. This is physical attacks on people as we had at the Rogers Place here in Edmonton. This is arson. This is attempted murder. So, it’s time that the government took this seriously. Find out who these perpetrators are. These are hate-motivated crimes. And that we trace the origin of this incident perhaps to a certain embassy in Ottawa and then we’ll call for the removal of those so-called diplomats,” said Chyczij.

Taras Podilsky, President of the Edmonton Branch of the League of Ukrainian Canadians, whose own building has been targeted many times by vandals in the past because of its monument to Ukrainian Insurgent Army Commander Roman Shukhevych, said “there seems to be more and more evidence that this is an organized group” committing the hate crimes.

“There is a pro-Russian lobby, there always has been as we know, but I think it’s becoming more aggressive,” he added.

According to security camera footage, the swastikas were sprayed on at about 3 AM by a man whose identity was hidden by a hood.

It was first noticed by the building’s manager Olee Wowk when he came in later that morning and informed the police, who are treating this as a hate crime.

The incident was covered by CTV, CBC, Global television, and the Edmonton Journal and Edmonton Sun who are owned by the same company and have the same staff.

Yaroslav Broda, Edmonton branch president of the Ukrainian Canadian Congress (UCC), told the Edmonton Journal/Sun the vandalism is especially hurtful because many members of the local Ukrainian community and their ancestors are victims of Nazism.

“To get painted with that brush — it’s pretty upsetting,” Broda said. “And it just goes to show how pervasive Russian propaganda is, even in Canada.”

UNF Edmonton Corresponding Secretary Marco Levytsky, told Global News Online Reporter Phil Heidenreich the UNF has been “spearheading and handling and organizing the welcoming committee for Ukrainian refugees coming into Edmonton,” and that hundreds have already arrived in the city since the military invasion began.

He added that while he does not know who may have been behind the vandalism, he is convinced it is the work of “someone who is obviously influenced by Russian propaganda.”

“(I believe) Russian propaganda’s behind this,” he said, noting Ukraine’s president is Jewish and was handed a landslide electoral win by Ukrainians.

Levytsky said that with ongoing actions being taken by Russia in Ukraine resulting in high numbers of civilian deaths, it disturbs him to see people helping Ukrainians fleeing the war being targeted by vandals.

“I don’t understand why people do stuff like this.”

He noted that he does not believe the vandalism reflects badly on the city as Edmontonians as a whole have come together to help Ukrainians fleeing the violence.