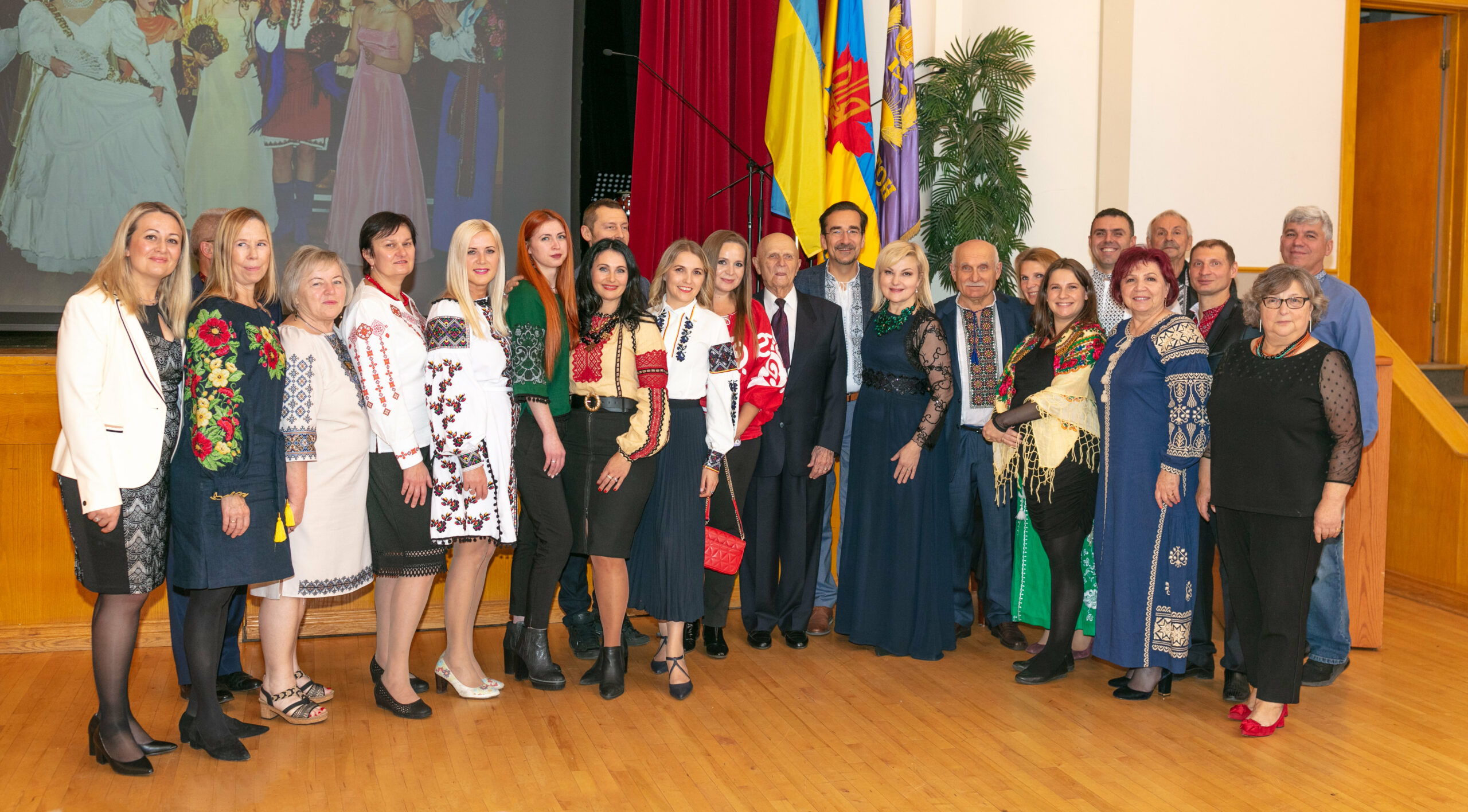 Some of the performers and participants at the banquet. All photos by Roman Petriw

The Ukrainian National Federation celebrated its 90th Anniversary with a sold-out banquet at the UNF Hall in Edmonton – the city in which was founded in 1932 – October 22.

Special guest was Ukrainian singer Maria Burmaka who described the traumas experienced by Kyiv residents hiding in bomb shelters and how courageously Ukrainians have united behind the war effort. Many artists and musicians who had no previous military experience have volunteered for the front.

Russia, she said, is conducting a true genocide and perpetrating a moral terror in Ukraine. 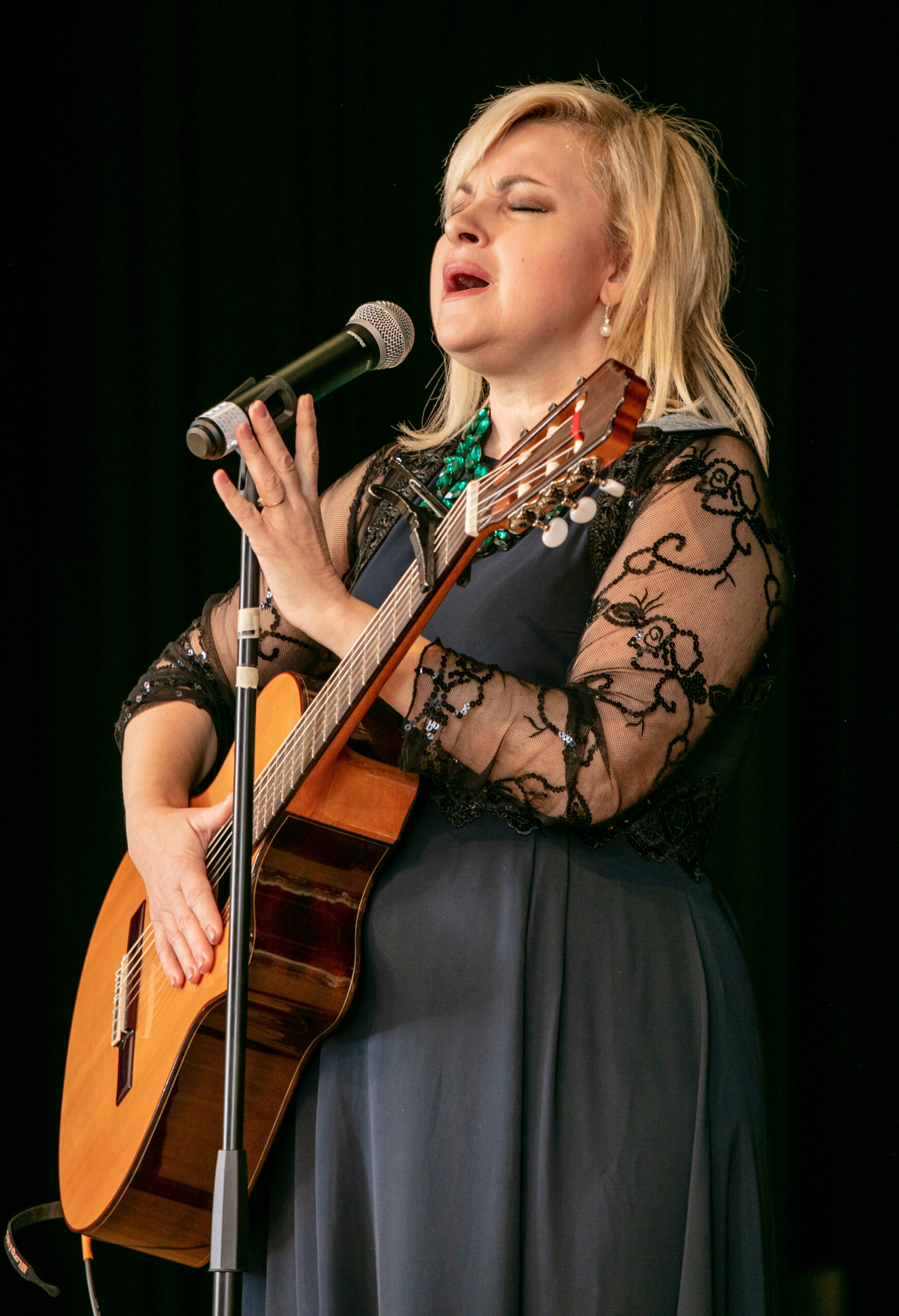 Burmaka added was extremely grateful to the Ukrainian community in Canada for their support and commended those born in Canada for preserving Ukrainian culture and language for so many decades.

As she picked up her guitar, Burmaka proclaimed she wasn’t going to sing any sad songs, but instead performed three patriotically inspirational ones she had written – “Ne biysia zhyty” (Don’t be afraid to live), “Vernys’ zhyvyi” (Return alive) and “Peremoha bude z namy proty vrazhoyi ordy” (Victory against the enemy hordes will be ours).

UNF National President Jurij Klufas, who came from Toronto especially for the event, described the UNF as the “lamp of Ukrainian identity” in a bilingual address. 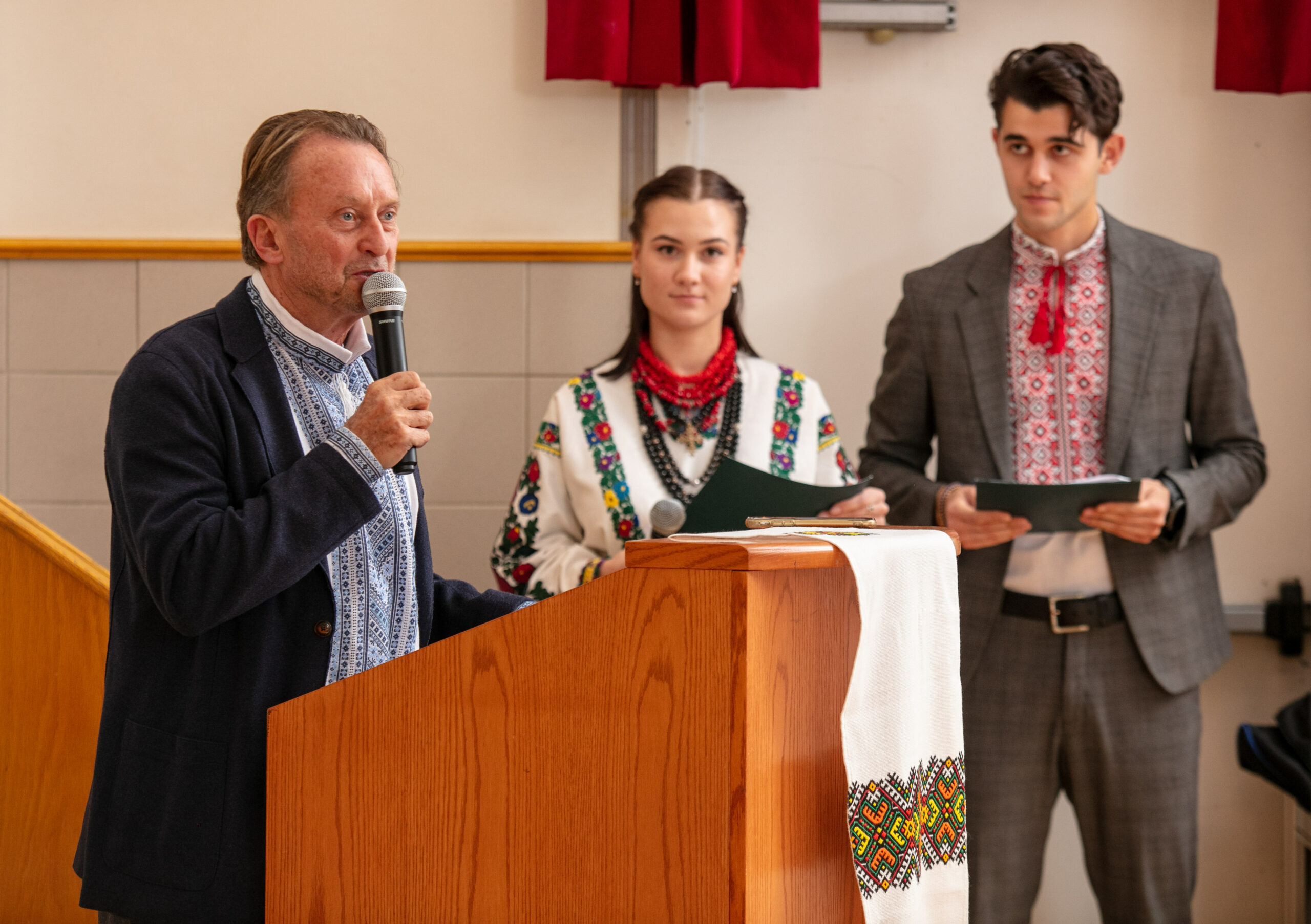 “Today we continue to steadfastly support our sisters and brothers in their struggle for the Independence of Ukraine and. At the same time, we skillfully preserve and continue to develop our Ukrainian Canadian cultural heritage here, at home, in Canada,” he said, speaking in Ukrainian.

“Considering that just recently we were celebrating Canada’s 150 Birthday the members of the UNF did not just build their own Ukrainian organization but also helped build Canada.

“When to this historical perspective we add the current needs of our Ukrainian community caused by the terror created by Russia’s invasion of Ukraine we are all the more grateful to the Ukrainian Canadian Women and Men that have led the UNF for almost a century!” he noted in English.

Klufas referred to the previous day’s concert by Burmaka and her “exceptionally inspirational” song “Don’t be afraid to live” stating “a perfect example came before my eyes”.

“I would like to greet your member, my friend Marco Levytsky for his courage and bravery in turning a serious obstacle in the physical world into an individual victory! He was not afraid to live”.

Members of the audience gave Levytsky, who recently had his right leg amputated above the knee, a standing ovation.

Edmonton Mayor Armajeet Sohi congratulated the UNF and the Ukrainian Women’s Organization (UWO) on their anniversary and said the city is doing what it can to help people escaping the war at the municipal level. This includes providing free transit and access to recreational sites.

“We stand in solidarity with the community,” he stated adding that we have to stand together: “If not evil will prevail.”

Ukraine’s Consul-General to Edmonton Oleksandr Danyleiko said the historic photos of UNF on display represent “generations of work, generations of people who gave their souls, who gave all their strength so that this organization could work, so that Ukrainian culture and Ukrainian knowledge could be preserved here in Canada.”

Right now, one of the most important aspects of UNF’s work is helping refugees from Ukraine. The UNF was one of the first organization to respond to the challenge by organizing the greeting booths at the airport which provided newcomers with valuable information and helped them resettle, he added and lashed out at the Russian invaders of Ukraine.

“They are losing on the field of battle, they can’t do anything on the field of battle, so they decided to fight with children, with schools, with women, with electrical power plants, in order to leave Ukraine without light, heat during winter. This is genocide. They want Ukrainians to die without water, without gas in winter and are destroying the infrastructure to deny any form of normal life,” Danyleiko said.

UCC National Vice President Olesia Luciw-Andryjowycz said that its founding the UNF in 1932, has been one of the most important pillars of the Ukrainian Canadian community.

“Across Canada, the UNF and Ukrainian War Veteran’s Association, The Ukrainian Women’s Organization of Canada and the Ukrainian National Youth Federation and your branches undertake an enormous amount of responsibilities, training generations of young leaders through such initiatives as the Paul Yuzyk Institute for Youth Leadership, supporting arts, cultural endeavors and festivals, educating our young people in arts and Culture, in summer camps, representing Ukrainian Canadian veterans, and working to provide services for our seniors and elders,” she said.

“During the national crisis brought on by the covid-19 pandemic, the ability of the National UNF, your branches and affiliated organizations to adjust to new realities and continue serving and supporting your members and constituents and our Ukrainian Canadian community. You have served as a model for the UCC and an example to us all. Your tireless efforts have been a critical part of our community’s response to the challenges of the pandemic and an essential part of maintaining the well-being of our community,” Luciw-Andryjowycz added.

UCC Alberta President Orysia Boychuk noted that the founding president of the UNF, Alberta school teacher Alexander Gregorovich, headed “an organization that brought together both Canadian-born and immigrant members, as it proudly continues to do today”.

“The Federation is a lighthouse organization that promotes sacrifice and work for a better future for Canada and places the responsibilities as citizens of this country, ahead of their own personal affairs, to preserve our rights, freedom and our Ukrainian culture and language for future generations. At the same time, the Federation has never lost sight of the importance of continuing the battle for a free, independent and sovereign Ukrainian nation.

“The contribution of the Ukrainian National Federation and its members over nine decades is commendable. It has remained the centre for Ukrainian drama, song, music, dance, youth, and the Ukrainian Women Organizations. It has been a core hub for our community to gather and we are so proud of its tenacity and resilience to endure and thrive for 90 years. Today, it continues to welcome Ukrainian newcomers and we are so grateful for everyone’s dedication and commitment to preserve our Ukrainian heritage of our ancestors,” she added.

Edmonton Branch UNF President Ivan Lypovyk noted that the UNF Hall was built 75 years ago by Ukrainians who were forced to leave their native land but wanted to preserve Ukraine beyond its borders through political and cultural development. The UNF Hall witnessed the birth of the Shumka and Cheremosh dance groups as well as the Dnipro choir.

Today like never before we have to once again assure ourselves of the importance of our activity in Canada,” he said, speaking in Ukrainian. “When the enemy wants to destroy our nation, our language, our culture, the mission of the UNF rises up anew to stand up for the interests of Ukraine in Canada and to ensure that our nation remains unbreakable.”

Together with the UWO and UCC-APC, the UNF conducted meetings with newcomers passing on informational, social and psychological aid, and organized a Ukrainian welcoming booth at Edmonton International Airport, he noted. In addition, members of the “Suzirya” drama group put on theatrical performances, weekly protest actions and peaceful demonstrations artifacts were sold by the children of “Dzherelo” to aid Ukraine and the musical group “Ruta” appeared at many benefit concerts.

UWO President Iryna Kravets-Kuzmicz called upon members to keep up their high-ranking reputation and great potential. 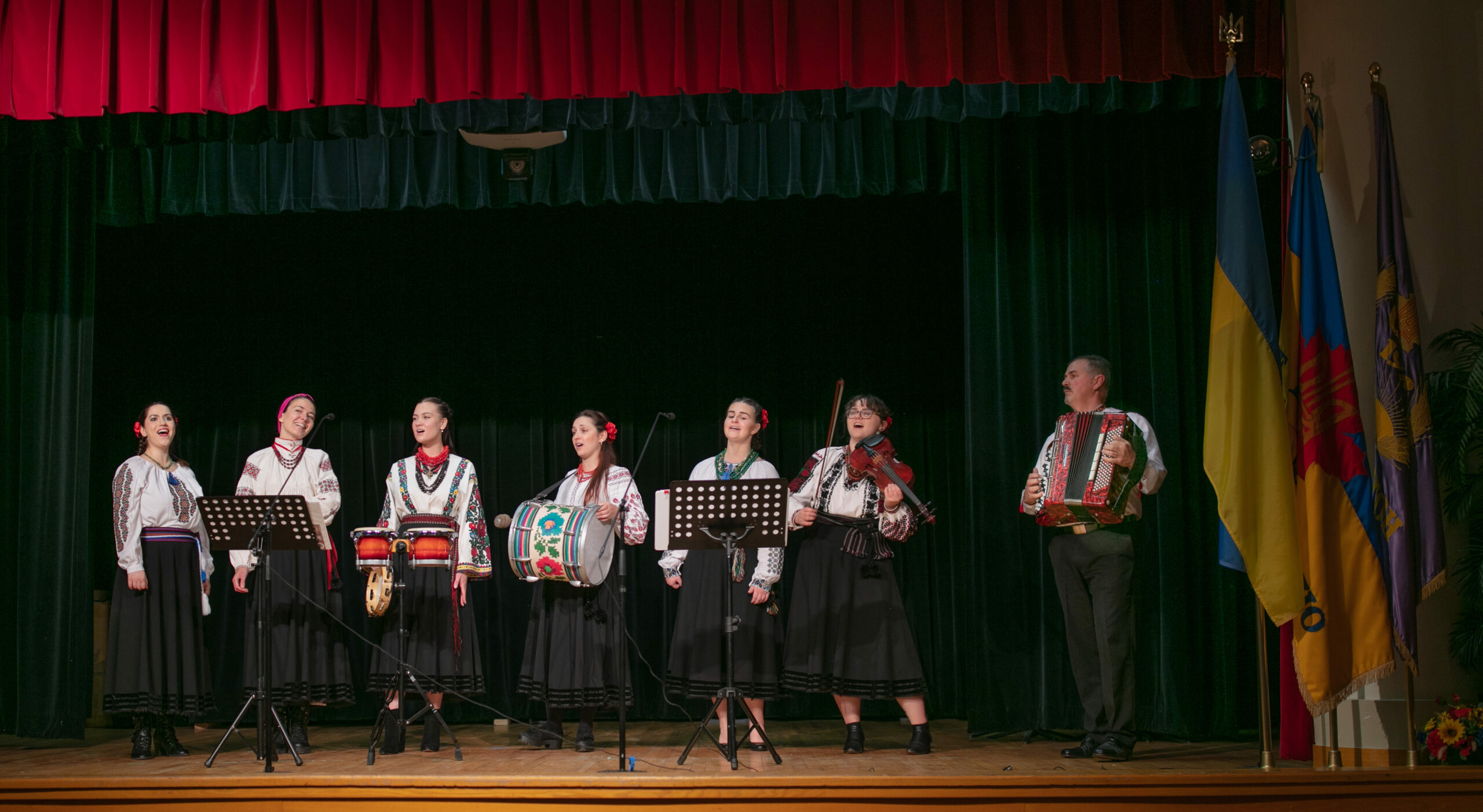 “May the organization only strengthen its position within the Ukrainian community with each passing year, may you be able to attain unbelievable successes and great heights with each day. Much has been done by those that came before us. Throughout the past 90 years history was created, traditions were preserved, and this work continues until today…We wish victory for all of us.”

Entertainment was provided by the Ukrainian Dramatic Ensemble Suzirya, the Ukrainian Children’s Theatre-Studio Dzherelo, and the Ukrainian Musical Ensemble Ruta. Sofiya Semenko and Konstiantyn Lutchenko served as Masters of Ceremony. 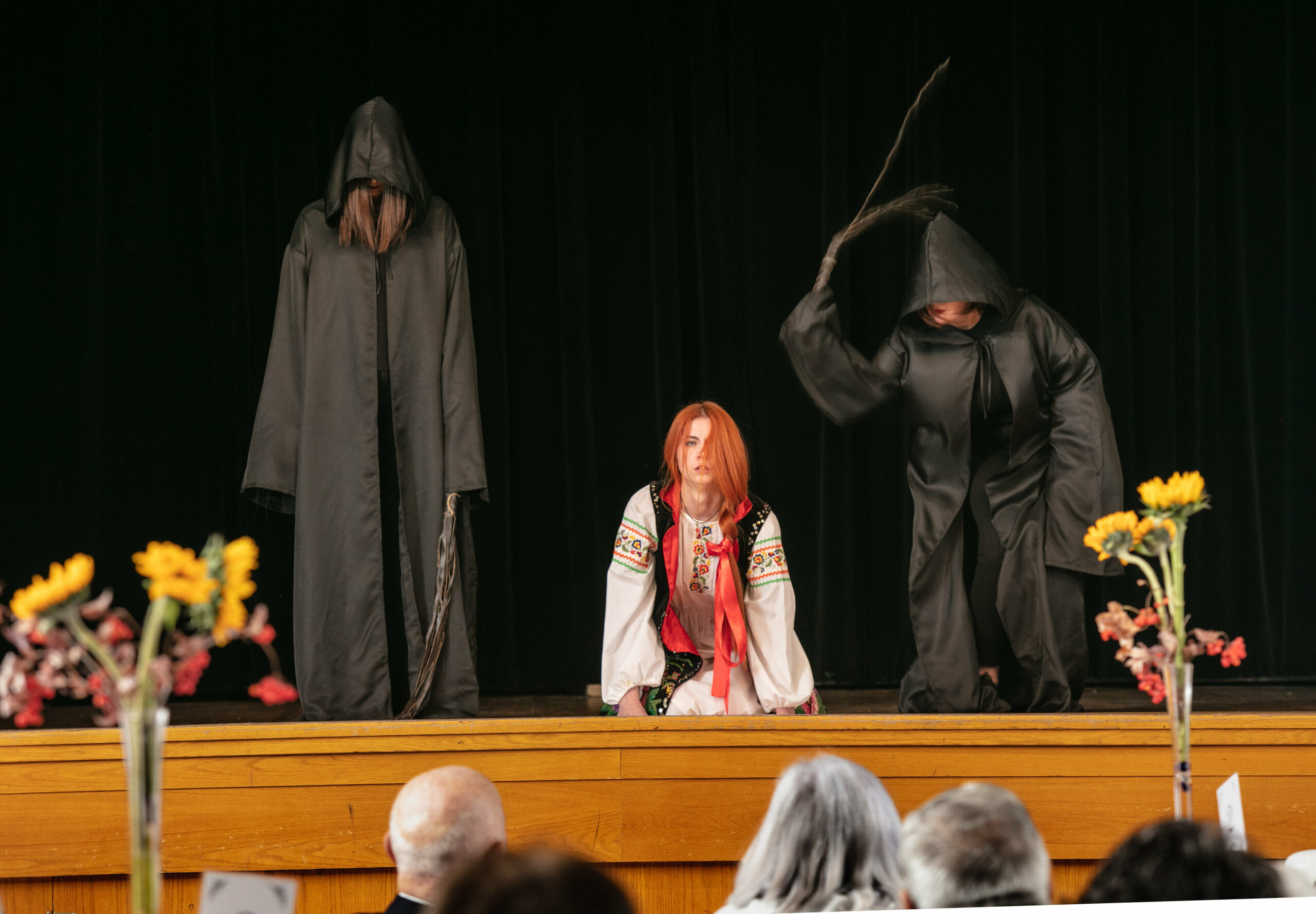