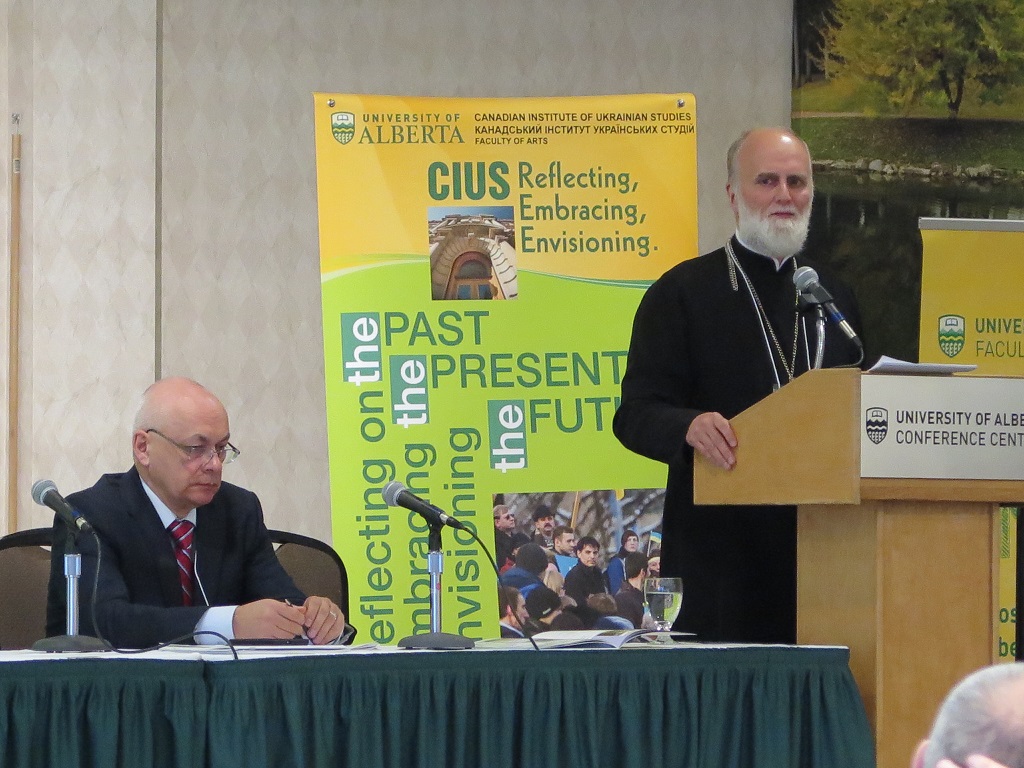 Continued from the previous issue

CIUS director Volodymyr Kravchenko reiterated that CIUS’s fundamental mandate was research and publishing. Yet now the time was ripe, he asserted, for the institute to start thinking about teaching Ukrainian courses at the university level.

The conference program upheld the supporting role of the community in CIUS operations, with gratitude expressed to the listed conference sponsors, which included—in addition to the university’s Faculty of Arts and the Kule Institute for Advanced Study—local organizations and many individuals. Among the attendees at the conference was Dr. Jeanette Bayduza, whose recent generous gift to CIUS made possible one of the fellowships to which Kravchenko referred (the inaugural Bayduza Post-Doctoral Research Fellowship for the Study of Modern and Contemporary Ukraine).

Ambassador Shevchenko was the featured speaker at the banquet that followed the conference. He emphasized the importance of the work that institutions such as CIUS have done for the development of Ukrainian identity. He also echoed a sentiment expressed during the conference that the study of Ukrainian problems helped in the understanding of larger global issues. Dean Lesley Cormack complemented that view by noting that social scientists were better equipped to resolve the problems of the world than others. Greetings were also brought by representatives of the federal and provincial governments—Member of Parliament Randy Boissonnault and Alberta Minister of Economic Development and Trade Deron Bilous, respectively.

The 40th anniversary of CIUS happens to fall on a year of other major anniversaries: 125 years of Ukrainians in Canada, 25 years of Ukraine’s independence, and 150 years since the birth of historian and civic leader Mykhailo Hrushevsky. In conjunction with the latter, Frank Sysyn presented a recently published volume of Hrushevsky’s History of Ukraine-Rus' to Nadia Jacyk, whose father, Petro Jacyk, inaugurated the multi-volume translation project.

In honour of the occasion, and replacing its regular annual Newsletter publication for this year, CIUS published the full-colour commemorative overview CIUS: Forty Years of Excellence. This beautifully designed 56-page “ruby jubilee” publication is available in hard copy as well as online. A video of the CIUS 40th Anniversary Conference proceedings will also be posted online, with texts and transcriptions to be added at a later date.