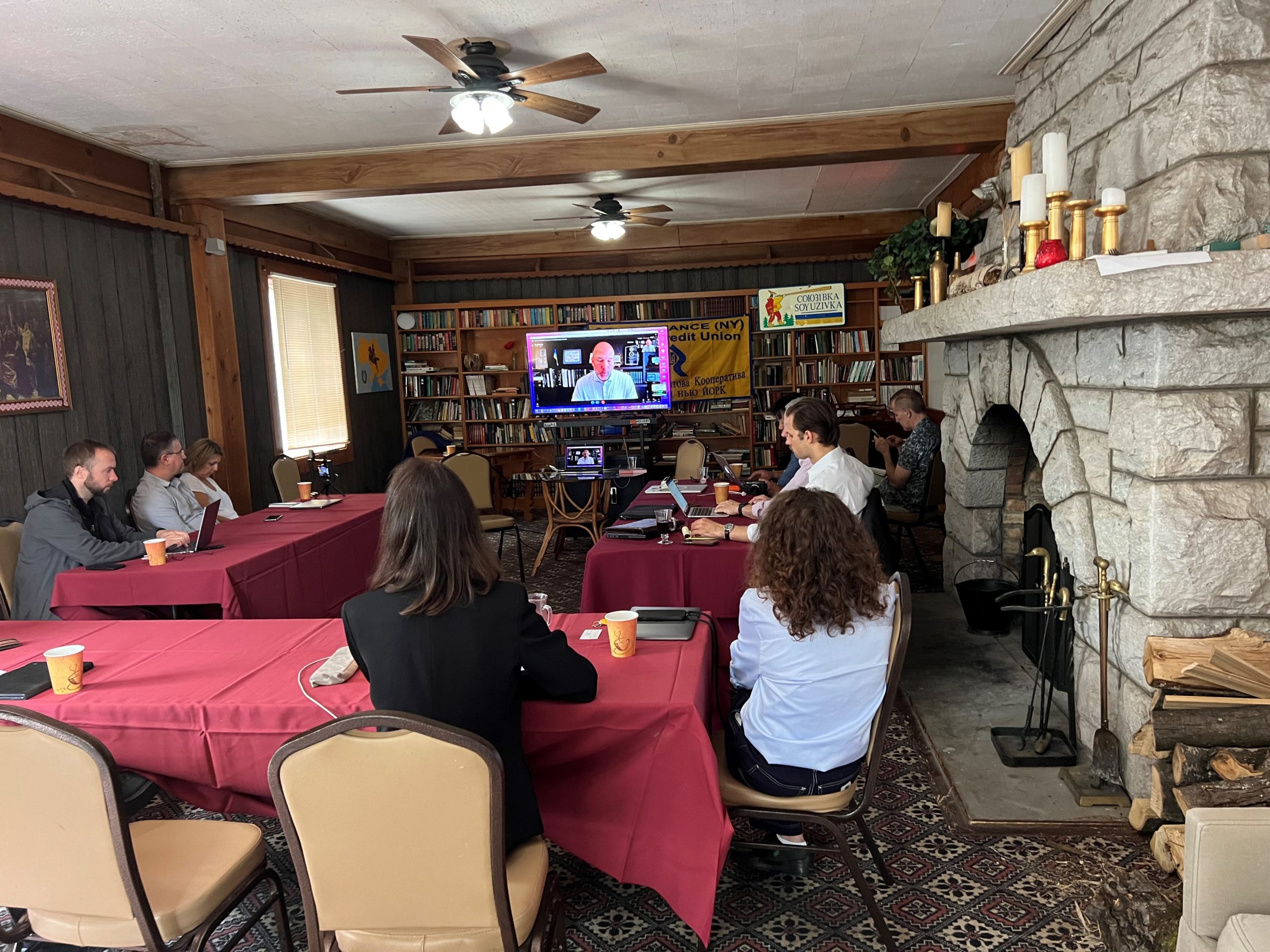 Why gather at a resort in the middle of a brutal war that is devastating the homeland? This question bothered the members of Ukrainian Journalists’ Association of North America (UJNA) before their annual meeting at the Soyuzivka Heritage Center in Upstate New York on June 10-12. The common feeling after the meeting, which was organized by UJNA president Jurij Klufas, was that the convention was well worth it and even very important. It allowed the journalists to bounce the ideas off of each other, to listen to the business and community leaders and other influencers, and in the end to create a deeper and more comprehensive picture of what the Ukrainian media of North America should do to help Ukraine in the time of dire need.

The presentations and discussions at the convention orbited around several topics: the current state and prospects of the war that Russia is waging on Ukraine; the global response to the war and the ways to better help Ukraine; the Ukrainian diasporan media’s role in bringing the realities of the war and Ukraine’s needs to the global audiences; and the future of the Ukrainian media, both in Ukraine and the Diaspora.

In terms of the war and the global assistance for Ukraine, the convention considered first things first. Paul Grod, President of Ukrainian World Congress (UWC) said in his presentation that the discussions on how to reconstruct Ukraine and make it better and greener, of the likes that took place at this year’s World Economic Forum in Davos, are good, but Ukraine first needs to win the war. He said that winning the war is important for Ukraine not just because it’s about Ukraine’s territorial integrity but also due to Russia’s genocidal policies which he witnessed in Kyiv’s suburbs of Bucha and Irpin.

Paul Grod wants Ukrainian journalists in North America to tell the world the stories of genocide perpetrated by the Russians in Ukraine. The Ukrainian communities in all major global centres, said Grod, need to use sophisticated methods, including working with political leaders and publishing opinion columns in the local media, to influence their governments to help Ukraine.

At the same time, many speakers at the convention recognized that the Diaspora, just like Ukraine, does not currently have a business model that would sustain a developed system of independent journalism and media. The convention considered the example of the successful rebuilding of the former Kyiv Post team of journalists and its transformation into the Kyiv Independent outlet. The new medium has raised funds that have allowed it to develop a strong foundation for itself and assist other Ukrainian media outlets. [See the Kyiv Independent story in the next issue of New Pathway – Ukrainian News]

How can Ukraine win the war? How can the collective West make this task less burdensome for Ukraine? Although the western sanctions against Russia have been praised and called unprecedented, in reality, they have not done anything yet to stop the aggressor. With the higher energy prices and only a partial European oil embargo against Russia planned to take effect this year, the aggressor state’s revenues from oil and natural gas exports to Europe are financing the war. Apart from the previously “naive” policies that lead to Europe’s dependency on Russia’s energy, Grod noted the need to strengthen the global resolve against the Russian oil and gas which are now increasingly flowing to Asia. Loopholes in the sanctions against Russian banks need to be eliminated while Russian oligarchs should not get a free pass, said Grod.

NP-UN asked Grod whether Canada with its vast oil and natural gas resources should do more to help Europe move away from Russia’s energy. Paul Grod said that Canada is currently “ill-equipped” to export its energy and that now is the time to open up the country’s reserves to the international markets. The reality is that it would take some time to develop Canada’s energy corridors and ramp up its export capacity. In effect, the country will not be able to substantially help alleviate the energy crisis that will hit Europe this winter and thus help Europe put more pressure on Russia.

Meanwhile, Ukraine needs urgent help. Melinda Haring, Deputy Director, Eurasia Center at Atlantic Council, stressed the dire situation in the Donbas where the Ukrainian forces are outnumbered at least 10:1 in terms of heavy equipment and ammunition and 3:1 in terms of personnel. She called the American plans to send just four Multiple Launch Rocket Systems to Ukraine “a recipe for failure”. Haring also attracted the journalists’ attention to Russia’s kidnappings of Ukrainians as at least 1.3 million Ukrainians including at least 200 thousand children have been taken to Russia. “Noise needs to be made about that, especially about the kidnapping of children”, she said. The population drain into the Western countries, where millions of Ukrainians have fled since the start of the offensive, is also of big concern. And the economic situation in Ukraine is gloomy – 9 out of 10 Ukrainians will be poor by Christmas if the war doesn’t stop, she said.

From Haring’s presentation, the journalists could make the conclusion that this war demands realism and objectivity on the part of the media. It transpired from her words that over-optimistic reports about an imminent or even longer-term comprehensive victory for Ukraine are hardly useful. To NP-UN’s question about her outlook for the war, Haring said that a middle-of-the-road scenario of a frozen conflict is the most realistic one. “The world will be sick of this conflict. The images of Bucha and all other places, where there have been war crimes, are horrific but not enough to cause the international community to do what it’s going to take to expel Putin from Ukraine. I think the fighting will continue at least until Christmas. It’s a war of attrition at this point and the question is, what can Ukraine get at a negotiating table”.

While listening to Haring, an old truth came to mind about the need for journalists to remain realistic and honest even in the most sensitive of the issues. Crimea will hardly return to Ukraine in the observable future: “Crimea is a dead issue unfortunately, I need to say that. I don’t see a way that Ukrainians are going to be able to get Crimea back any time soon. The best-case scenario is that Ukraine gets the Donbas back and we will have to settle with the non-recognition of Crimea”, she said.

The convention paid a lot of attention to the European Council’s meeting on June 23 and 24 which will decide the fate of Ukraine’s candidate status in the European Union.

Paul Grod believes that if Ukraine does not get the EU candidate status, it will disappoint the people of Ukraine and will embolden Russia’s president Vladimir Putin, even though this status is largely symbolic.

Olena Kalabania, former Chief Media Officer at Ukrainian Crisis Media Center, who now lives in France, provided quotes from the French media that Ukraine is Europe, that the war is going on in Europe, and has a “European face”. To NP-UN’s question, if the French journalists draw a direct line from those statements to the French government’s position about accepting Ukraine as a candidate to the EU and are calling on the government to vote for it, Kalabania’s answer was “Unfortunately, no”.

Several factors are at play in this kind of position, Kalabania said, including the fatigue in France about the EU enlargement and the perceived need for Ukraine to reform many of its sectors. The visit to Kyiv by the French president Emmanuel Macron, which happened after the convention in Soyizivka, provided some optimism about that country’s position on Ukraine’s candidacy. Whether the French and other European governments do consider Ukrainians a European nation worthy of becoming an EU candidate, will become clear on June 23-24.

The West’s attitude to Ukraine was among the subjects of a strategist Michael Popow’s fireplace chat with Michael Bociurkiw, Sr. Fellow at The Atlantic Council and CNN Opinion Contributor who was instrumental in organizing the convention’s interesting program. Popow compared Ukraine to Taiwan which is under the threat from China and whose fate depends heavily on the outcome of the Russian aggression in Ukraine. He said that, from a geopolitical perspective, Taiwan, as a world capital of technology manufacturing that makes 80% of the global advanced semiconductor production, is far more important to the West than Ukraine. Popow characterized Ukraine as a “domino too important to fall” and said that if Ukraine falls “Taiwan will not be far behind”.

But is Ukraine just “a domino” and the testing ground for the West to see how aggressions go in the 21st century? Does the West really care about Ukraine as a nation that belongs in the European and wider Western community? Popow believes that, like a domino, Ukraine will decide not just Taiwan’s fate but also who is going to dominate the world order in the next 100 years. If Ukraine falls, the decline of the U.S., as the most powerful democratic country in the world, will accelerate. If Ukraine stands, the American decline may be reversed. “Ukraine is part of a puzzle, but it’s incredibly important”, said Popow. “No other country has ever inspired U.S. citizens the way Ukraine has”, he added. Popow believes that Ukraine’s becoming part of the Western world is “irreversible”.