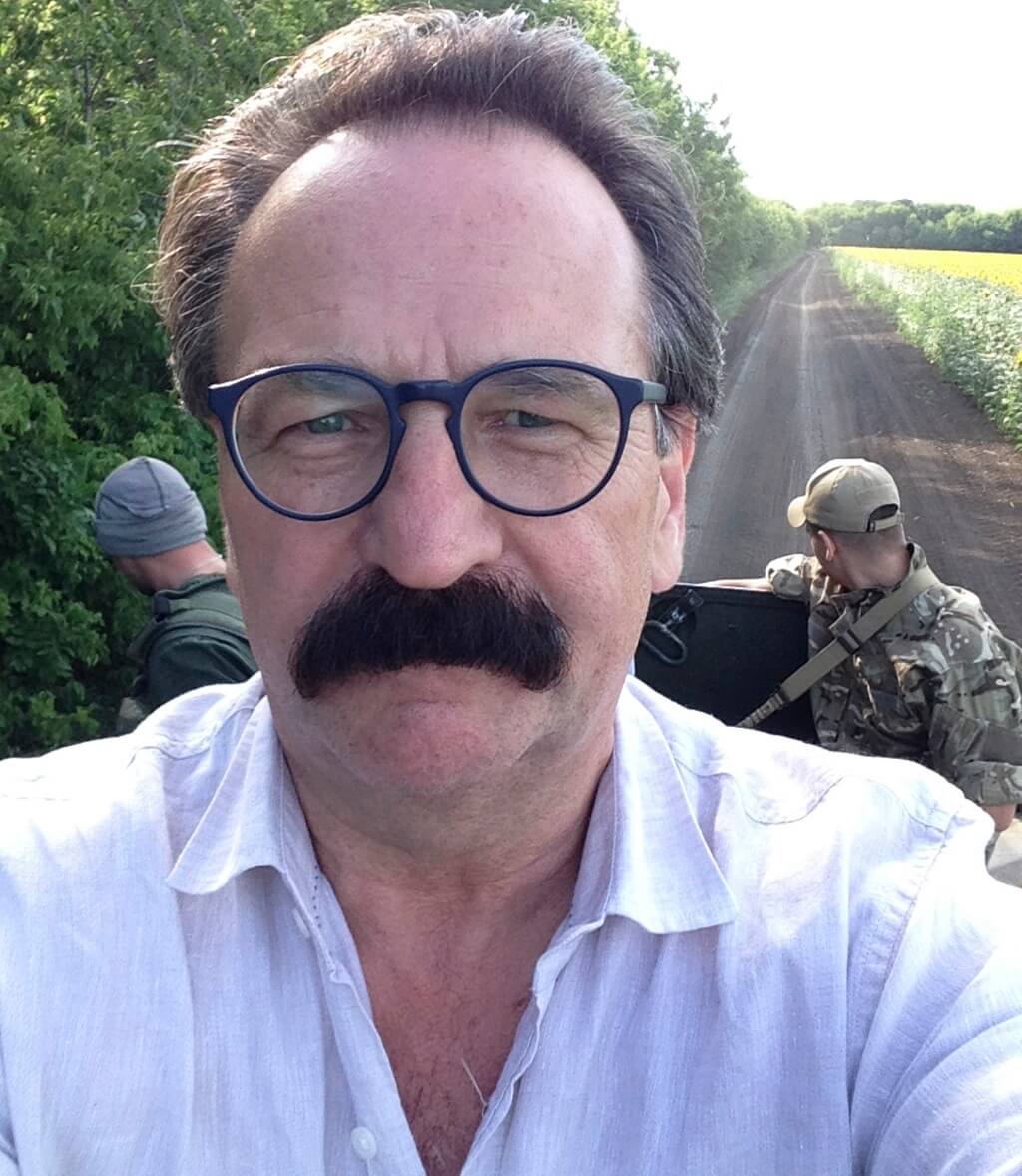 I’m not as good a runner as I used to be. This revelation came somewhere between the 9th and 1st floors of a murky, bomb-ravaged building located at the edge of no-man’s land in the Donbas region of eastern Ukraine. I began scrambling downstairs after our sentinel, positioned nearby, yelled “Run!” I did not ask why, nor linger to consider how only minutes before we had inched up these very same stairs, stepping carefully in each other’s footsteps to avoid setting off any booby-traps secreted to maim, mutilate, or murder anyone scouting this abandoned edifice. Children’s toys, full bottles of alcohol and other seemingly innocuous household items can be the disguised agents of your destruction, something I learned a few days earlier at the Ukrainian Armed Forces Demining Centre in Kamyanets-Podilsky. No matter. I ran for my life. It was only after I got outside and turned a corner into the comparative safety of shadows behind the building that I was told a Russian tank had emerged from the distant rubble, manoeuvring to take a shot. We didn’t offer the enemy a chance for target practice.

What surprised me was that I experienced no fear. Instead I was quite resigned to whatever might happen. Indeed the strongest emotion I had was a kind of desperate hope that I didn’t do anything to endanger my companions, members of an elite Ukrainian military intelligence unit. So I was pleased when I got out of that ruin without failing my friends, even though I was quite winded, my big toes bruised badly despite the protection of combat boots. Like I said I’m not a runner anymore.

We moved to a nearby firing position, heavily sandbagged, from where my companions opened up at the enemy’s front line. Crouching, I snapped a few photographs, including one of “Okun,” the squad machine gunner. His pseudonym means “Perch.” This troop regularly penetrates the enemy’s front lines to gather intelligence and sow fear in the hearts and minds of the Russian invaders and their local collaborators. The latter are dismissively called vatniks after the padded jackets worn by the Russian military, considered little more than a dull-witted breed of drunks and criminals, certainly no match for the professional Ukrainian soldiers who routinely best them on the battlefield. Even so Ukrainian special forces soldiers usually do not give their names or like to be photographed, to lessen the chance of the Russians targeting their loved ones, many of whom live close by in the Donetsk oblast or a few hours away in Kharkiv. Ukrainian spetsnaz groups have infiltrated the occupied territories. Their enemies do the same in the opposite direction. The Ukrainians know their foes have no scruples when it comes to murdering women and children to further Moscow’s ongoing campaign to destabilize Ukraine.

As I questioned these troopers I learned many have been fighting since the Russians invaded in February 2014. For them this is not a civil war or an Anti-Terrorist Operation, even if Kyiv’s politicians pretend otherwise. Instead they see themselves as soldiers in a war of independence, struggling to secure Ukraine’s proper place in Europe rather than allowing their homeland to be swallowed by a resuscitated Russian empire, as prescribed by Vladimir Putin, the KGB criminal in the Kremlin.

Since Ukraine’s soldiers understand what they are fighting for their morale remains excellent. A Ukrainian spetsnaz officer in Luhansk oblast told me: “In early 2014 I just wanted to stay alive. By 2015- 2016 I was fighting to recover occupied Ukrainian lands. Today I think of myself as a wolf. I know the boundaries of my territory. I do not want anyone else’s. I know how to kill. And I believe every Ukrainian woman, whether a child, a mother, a wife, or a grandmother, is a woman I must protect. And so I will pursue the enemy until every one of them is killed or goes back where he came from. Not one of them will be allowed to occupy even a metre of Ukrainian land, except for those whose bodies will rot in our chornozem soil, fertilizing it as the corpses of all of the past invaders of Ukraine have done. There can be no quarter. We did not invade their country. They attacked ours. Now we will make them pay for it.”

That credo comes with a price. A Russian sniper killed Okun the next day. He was 20, a volunteer who joined up in December 2015, an only son. When the news came I realized I had forever captured his last photograph. I made sure his mother got it. Her son, Maxim – for that was his name – died bravely in battle. Although I could not attend his funeral I believe this good young man rests in peace having sacrificed himself in a just war, defending Ukraine. There is a glory in that.