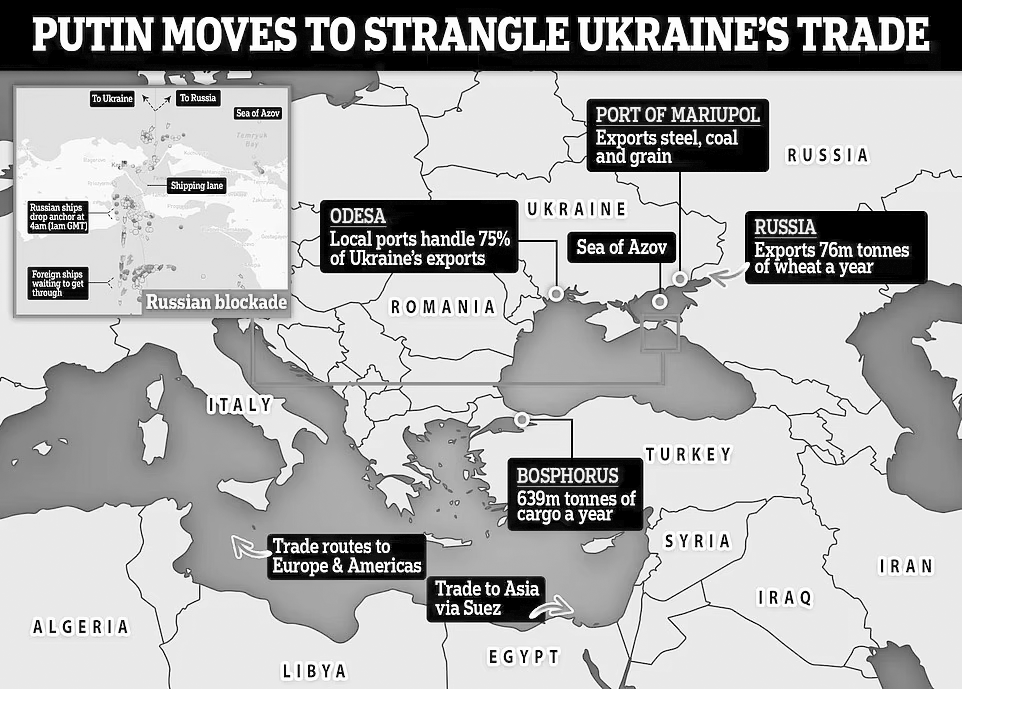 With the occupation of the Southern and Eastern regions of Ukraine, russian troops are currently blockading both Azov and Black Sea ports in the country. «russia has blocked almost all ports. All, so to say, maritime opportunities to export food products — our grain, barley, sunflower and more … 22 million tonnes are blocked by the russian federation today», President Volodymyr Zelenskyy said during a recent briefing. This figure includes around 1.25 million tonnes of grain on commercial vessels.

Seed oils, corn and wheat are generally among the top exports of Ukraine. But as the result of the sea ports blockade, the usual amount of five million tonnes of the monthly export harvests dropped to around 500,000 tonnes. According to Ukraine’s Agriculture ministry, this downfall costs about $1.5 billion. At the same time, by sieging Ukrainian sea ports, the russians are provoking a global food crisis, the effects of which are likely to become apparent as early as this July. «The prices for crops, and later other foods as well, might rise catastrophically», Ukraine’s president has reported.

However, despite the millions of tonnes of agricultural products under the russian occupation, which made it impossible for the vessels to move freely through usual sea shipping routes, Ukraine isn’t likely to experience any significant food crisis any time soon. «There are enough stocks of basic products for several years to come. Oils — at least for a decade. … There are no reasons to worry», said Ukraine’s agriculture minister Mykola Solskyi. Currently, the majority of Ukrainian grocery stores offer all kinds of grains, oils and other basic food supplies without limitations. However, the situation varies across regions, as there is very little information about what is happening in the occupied areas of Donets`k, Zaporizhzhia, Luhansk, Mykolayiv, Kharkiv and Kherson regions.

During the UN meeting on global food security last month, secretary-general António Guterres spoke of the alarming impact of russia’s blockade of Ukrainian sea ports for the world. He pointed out that the shortages of grain and other agricultural goods threaten to «tip tens of millions of people over the edge into food insecurity». Further on, russian occupation of Ukrainian sea ports will be followed by «malnutrition, mass hunger and famine, in a crisis that could last for years».

In the meantime, the recent satellite images show russia loading its own vessels with the stolen grain from Ukrainian ports and warehouses at the Crimean port of Sevastopol. Ukrainian officials point out that Russia has already stolen five hundred thousand tonnes of grain. And while some portion of that will end up in russia, the aggressor has already been caught trying to sell the stolen food supplies abroad. According to the information from the Ukrainian embassy in Beirut, russia has recently sent an estimated amount of 100,000 tonnes of stolen wheat from the agriculturally rich regions of Kherson and Zaporizhzhia to Syria.

While the UN hopes to restore Ukraine’s grain exports by appealing to russia to allow «the safe and secure export of grain», russia blackmails the world with a food crisis in order to lift sanctions. In the meantime, the UN Chief Guterres backs the russian side, saying that russian food and fertilizers «must have full and unrestricted access to world markets». The US, however, is not going to agree to a deal that would lift any economic pressure on the kremlin, as was reported by Politico. «Putin is waging war on other innocent people across the world by holding Ukrainian food and related exports hostage», commented Sen. Jim Risch of Idaho.

Despite the Azov and Black sea ports being under temporary russian occupation, Ukraine has already worked out several alternative transportation pathways. Since the beginning of the war, Ukraine’s foreign trade has been going largely through the railroads, river ports, and autoroutes, but exports have declined severely. As the head of the Ukrainian Agribusiness Club reports, the transportation through the land routes can provide a flow of up to 600,000 tonnes per month, which is just 10%-15% of what could have been moved through the sea ports.

For the safe move of vessels to be restored, russia must withdraw its forces from the maritime waters around Ukraine and provide security guarantees, the Ukrainian Ministry of Foreign Affairs reported earlier this month. On Monday, the Ukrainian president Zelenskyy indicated that Ukraine is working to obtain anti-ship weapon systems to unblock the sea ports: «Our weapons are our strongest guarantees», he said.