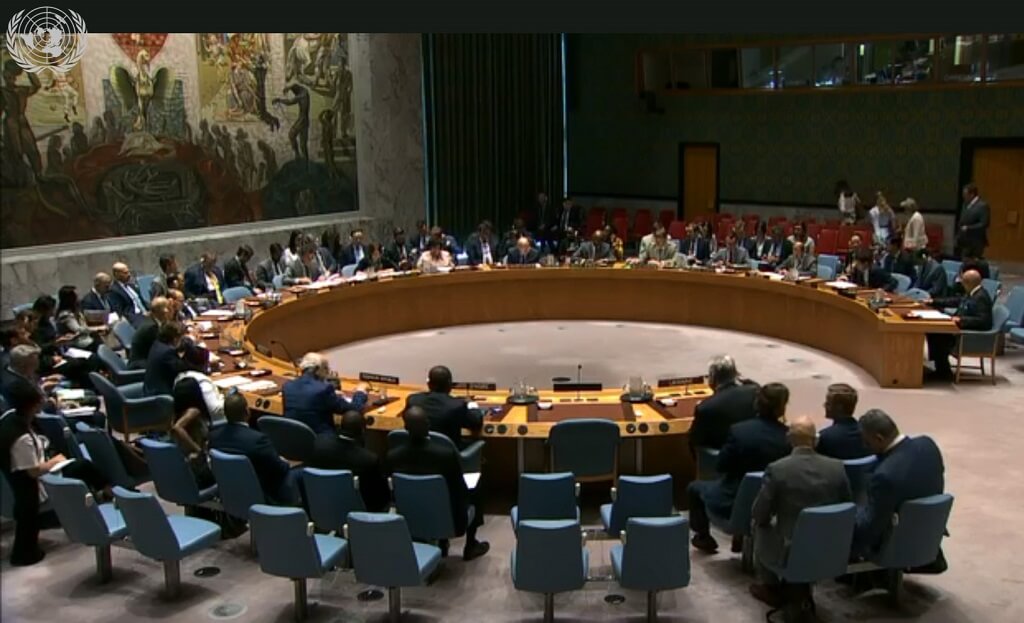 On Tuesday, July 16, the legislation “To ensure the functioning of Ukrainian as the State language” that was adopted by the Verkhovna Rada on April 25 of this year came into force. The law says that Ukrainian is the only official language in Ukraine and its usage is obligatory by the bodies of State power.

The law obliges officials to know the State language and speak Ukrainian while performing their duties in their jobs. Ukrainian is obligatory for use in public education, medicine, in the sphere of services, during cultural events, in television and radio broadcasts.

The law does not require using Ukrainian in private communications and church sermons.

On the day the language law took effect, the Russian Federation initiated a meeting at the UN Security Council on this topic. The Russian delegation tried to organize the discussion of this law this May but a meeting was cancelled because it coincided with the day of inauguration of President Volodymyr Zelenskyy.

The Russian delegation denounced the language law during the July 16 meeting. Vasily Nebenzya, Russia’s ambassador to the United Nations, said that the language law violates all conventions on the protection of rights of national minorities and is “a forced Ukrainization of the country”. In his words, the law was passed without a national consensus and on political motives. His Ukrainian counterpart Volodymyr Elchenko while addressing the session stressed that the issue of using the Ukrainian language is an internal affair and should not be the topic of discussion at a meeting of UN Security Council. In his opinion, Russia, by bringing up the subject of the language, pursues a double goal — first, to exert political pressure on Ukraine and, second, to draw attention away from other urgent issues. Although the United Nations and the OSCE called for a constructive dialog on protecting the rights of national minorities in Ukraine, the delegations of the United States, Britain and France used the session to focus its attention on Russian aggression against its neighbor country and demand an end to the occupation of the Crimea and the restriction of minority rights on the peninsula. The Western powers demanded justice on the eve of the fifth anniversary of the crash of Malaysian flight MH17 in the sky over Donbas, the tragedy that took the lives of 298 passengers.

Thus, American diplomat Rodney Hunter said that the missile launcher “Buk” which had fired at and downed the MH17 belonged to 53rd missile brigade of the Armed Forces of the Russian Federation. Bellingcat investigators came to the same conclusion in 2015.

He went on to state that his country’s sanctions would remain in place until the Russian Federation ends its occupation of Crimea and it fully implements the Minsk agreements. The United States and its allies also called for the release of Ukrainian sailors and vessels detained during an incident in the Kerch Strait (Sea of Azov) in November 2018.

Analysts believe that the UN Security Council session on the Ukrainian language law initiated by the Russian Federation turned out to be a failure for the Russian Federation in the first place. And not only because the session passed no resolution whatsoever. Immediately after the session the delegations of six countries of the European Union – Belgium, France, Germany, Poland, Great Britain and Estonia – made a joint statement in which they said, “We expect that Russia immediately stops feeding the conflict and refrain from actions that suvert the Minsk agreements and prevent the Ukrainian Government from establishing control over these territories. Russia has to stop financial and military support of separatists and issuing Russian passports to Ukrainian citizens in Donbas”.

The statement calls all countries, particularly Russia, to cooperate fully with the investigative team and the law-enforcement bodies of the Netherlands in order to find the guilty in the downing of Malaysian Airlines MH17.

On July 17, that marks the fifth anniversary of the crash of the airliner, Federica Mogherini, High Representative of the Union for Foreign Affairs and Security, speaking on behalf of the European Union demanded from the Russian Federation to admit its responsibility for the crash of the Malaysian Boeing and begin immediately to cooperate with the investigation.