Danylo Myhal, left, from Lappe, Ont., and Oleksandr Shevchenko, consulate general of Ukraine in Toronto, are seen at Thunder Bay, Ont.’s airport with the Ukrainian flag that Myhal carried onto the pitch during a protest at a 1976 Montreal Olympics soccer match between East Germany and the U.S.S.R. Photo: Kris Ketonen/CBC

When Ukrainian President Volodymyr Zelenskyy decided upon a flag to raise at this year’s celebration of Ukraine’s independence, he decided upon one that was heavily symbolic. It was the flag a young Ukrainian Canadian, Taras Myhal, proudly carried across the soccer pitch of the 1976 Olympic Semi-Final match between East Germany and the U.S.S.R., whose team was made up primarily of Ukrainians from the champions Dynamo Kyiv team, shouting “Freedom for Ukraine”.

During the 15-second protest, Myhal also did the hopak. Police then hauled Myhal out of the stadium. He spent a few hours in jail, but had stuffed the flag down his shirt, and kept it to this day. This event was covered in the Western media, even making it to the New York Times.

Yulia Kovaliv, Ukraine’s ambassador to Canada, told CBC News that the protest was “a very famous moment for showing the Ukrainian feeling of freedom.”

“That was a very brave move at the time.”

She said that at the time, the U.S.S.R. was “trying to undermine all of the Ukrainian culture and Ukrainian identity.”

Bold as they were, Myhal’s actions were not unique. Similar protests were organized throughout the 1976 Olympics and again at the 1988 Olympics in Calgary. Demonstrations in front of the Soviet Embassy in Ottawa were commonplace throughout the seventies – usually in defence of dissidents. “KGB set them free” was the catch call. Those of us who grew up during the postwar period, who belonged to Ukrainian youth organizations, and who attended Ridna Shkola and Kursy Ukrayinoznavstva, were always imbued with the idea that we had to preserve the Ukrainian language, the culture and the dream that Ukraine would be free some day. 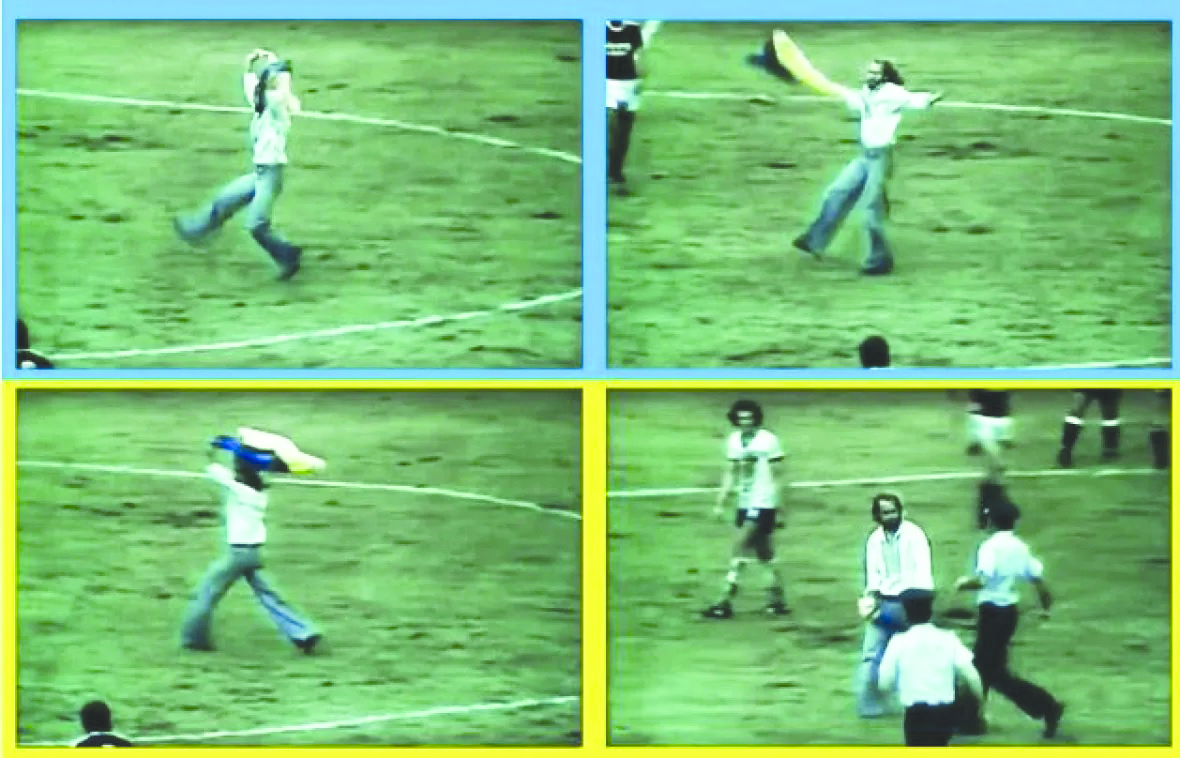 Myhal runs onto the field carrying a Ukrainian flag during the 1976 Olympics soccer match between East German and the U.S.S.R. The flag is now in Ukraine for flag day celebrations. Photo: ukrinform.net

Thus, as we approach Ukrainian Canadian Heritage Day (celebrated September 7 in Alberta and Ontario and in August in Manitoba) let us pay tribute to the immense contributions Ukrainians made to Canada’s growth and development as a country, but let us also remember how we, the Ukrainian Canadian Diaspora, kept that dream alive.

Most of the earliest pioneers were illiterate and not that nationally conscious. They considered themselves “Ruthenians” as opposed to Ukrainians. But they had a strong sense of faith and a developing identity. The two most cherished books they brought with them were a Bible and a copy of Taras Shevchenko’s Kobzar.

All that changed with World War One (when thousands experienced internment in Canada) and the subsequent struggle for Ukraine’s independence. The community split into two camps – those favouring independence for Ukraine (Catholics and Orthodox) and a strong leftist element which embraced the new Soviet Ukraine. And indeed, it did appear early during the twenties that there was a new Ukraine where the language and culture flourished under the policy of Ukrainization. But that changed when Joseph Stalin came to power and initiated a brutal genocide which became known as the Holodomor. The atheist pro-Soviet Ukrainian Labour-Farmer Temple Association (ULFTA), which later became the Association of United Ukrainian Canadians (AUUC), parroted Moscow’s line that the Holodomor was a lie, but a new organization organized by veterans of the war for independence, the Ukrainian National Federation came on board to battle those lies and bring the question of Ukraine’s right to self-determination to the forefront.

With the onset of World War Two and the ULFTA’s slavish adherence to Moscow’s dictates to oppose the “imperialist war”, loyal Ukrainian Canadians united under the umbrella of the Ukrainian Canadian Committee (now Congress). The arrival of thousands of Ukrainian refugees following the war greatly strengthened the pro-independence movement, while Nikita Khrushchev’s revelation of Stalin’s crimes against humanity, the 1956 invasion of Hungary and the 1968 invasion of Czechoslovakia decimated the pro-Soviet ranks. Prime Minister John Diefenbaker’s 1960 speech to the United Nations in which he called for the liberation of all Captive Nations of Moscow greatly boosted the morale of the Ukrainian Canadian community.

When independence came in 1991, the Diaspora was ready. Benefactors provided the Embassy, the Ambassador’s Residence and the first Consulate facilities. The Canada-Ukraine Foundation was created to help the nascent state develop. Many other projects were started, and the Diaspora did its utmost to help.

Today, as Ukraine faces its darkest hour it needs our help as never before. Millions have been displaced. The infrastructure is being systematically destroyed by Russians missiles. Those lucky enough to still have their homes are preparing for a winter without power and heat. Despite this many still donate their last kopiyky for the army. We, the Diaspora must step in. We need to advocate for military and humanitarian assistance and truly crippling sanctions against Russia from our governments in the strongest terms. We need to donate – to the military, for humanitarian aid – as well as helping our friends and relatives. For more information, please go to ucc.ca, www.cufoundation.ca, cnewa.org/ca, just to mention a few. And give! Give! Give! Give! As St. Theresa of Calcutta used to say: Give until it hurts.