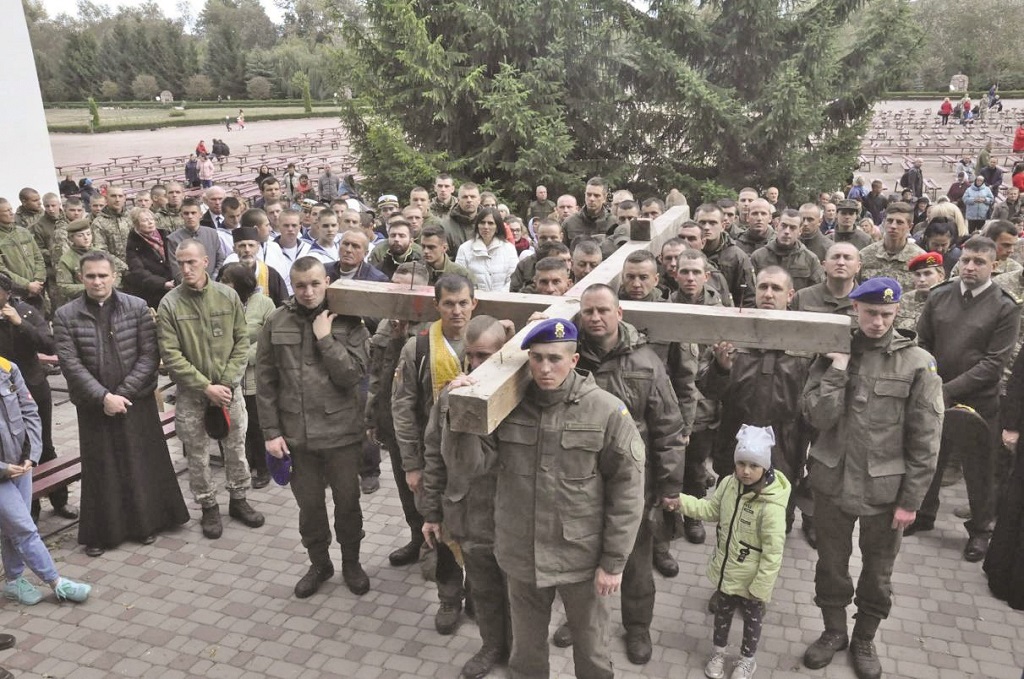 Ukrainian Greek Catholic Church takes its chaplaincy mission seriously. Over the past couple of years, Patriarchal Curia of UGCC carried out a project of supporting the UGCC Department of Pastoral Care in the Armed Forces with the help from the US $10,000 grant by Catholic Near East Welfare Association. The project’s work helped formulate and adopt the new legislation on chaplaincy, which was passed by Ukraine’s Parliament on November 30.

The project helped form the Church’s professional chaplaincy service and build capacity for military and penitentiary chaplains to develop psychological resilience and provide reintegration and resocialization of Ukrainian veterans. This also helped promote an adequate perception of the military and veterans in Ukrainian society.

Department of Pastoral Care in the Armed Forces has conducted trainings that helped develop a system of preparation of clergy to provide formation to the military chaplains. These training sessions, in which dozens of priests and seminarians participated, were conducted within pilgrimages and Church congresses. The events happened in Zarvanytsia, under the overall theme “Soldiers of God’s Platoon”, and in Kyiv, where tactical medicine was covered. The training at Zarvanytsia included the following themes: “Experience of pastoral care of military”, “Military chaplaincy: from the beginning till today”, “From own family and to military family”, “Military pastoral care in the teaching of the Church” and “Challenges and spiritual gifts on the way of God’s warrior”.

The training course on the peculiarities of pastoral care in penitentiary institutions and how to serve the imprisoned was conducted in five UGCC seminaries for 69 seminarians. The course, which featured lessons by such experienced prison chaplains as Fr. Konstantyn Panteley (Kyiv), Fr. Oleh Nestor (Drohobych), Fr. Omelyan Kolodchak (Ternopil), Fr. Arsen Panchak (Ivano-Frankivsk) and Fr. Taras Myrka (Lviv), included a visit to the penitentiary.

As part of the course, the seminarians learned: the history of Christian preaching in prison, the magisterium of the Catholic Church on pastoral care for prisoners, and the concept of sin and repentance. During the visits to the penitentiary, the seminarians learned how to preserve human rights in imprisonment and specifics of different kinds of penitentiary institutions. Seminarians co-celebrated Liturgies and prayers, had excursions with penitentiary employees, and co-organized catechetical lessons and quizzes (for minors).

To foster communication and sharing of knowledge among the chaplains, the Department organized three networking congresses.

In the first Networking Congress of prison chaplains, in Lviv in 2019, 20 prison chaplains participated. The congress discussed strategies to develop a prison service in a multi-confessional society. During the congress, prison chaplains learned the skills of pastoral counselling of prisoners and of working with prisoners with combat experience (veterans with PTSD). The latter subject benefited from the experience of the Dutch trainers from the Protestant Theological University (Amsterdam), the Ministry of Defense of the Netherlands and the Tilburg School of Catholic Theology. The congress discussed such deep philosophical themes as “Philosophical Issue of Freedom and Justice” and “The Issue of Guilt and Repentance”. The participants also learned how to partner with institutions of punishment and probation to better integrate the convicts in society.

In the second congress, later in 2019, 15 prison chaplains participated. The program discussed the participation of religious organizations in probation programs, how to organize pastoral offices in prisons, the problem of sin as a crime, and the issue of compassion in the Church’s Social Doctrine.

The project also provided spiritual and physical rehabilitation for military chaplains. In late 2019, ten military chaplains with extensive experience of service in the area of Joint Forces Operation (former Anti-Terrorist Operation, ATO) in eastern Ukraine had a 5-day session at the resort “Eagle’s Nest” in Transcarpathia. In addition to everyday prayer, the participants enjoyed various therapeutic procedures at the salt room, spa baths, received underwater shower-massage, physiotherapy, etc. They also had a chance to mix and communicate a lot about their practical and emotional experiences in the ATO, which helped them relax and rejuvenate.

The project included coordinating visits of the military chaplains in active military units. The Department of Pastoral Care’s staff visited chaplains serving in military units in five Ukrainian regions (Donetsk, Luhansk, Odesa, Zakarpattia and Kyiv) and spoke to the chaplains and their military commanders. The chaplains received additional resources for their service: prayer books, Church vestments and military uniforms.

The all-Ukrainian pilgrimage of penitentiary staff to the Monastery of the Univ Lavra occurred in June 2019. Over 100 employees of the penitentiary institutions (together with families) from Kyiv, Boryspil, Lviv, Drohobych, Ivano-Frankivsk, Chortkiv, Zbarazh and Ternopil, led by chaplains, participated in the pilgrimage for spiritual renewal and strengthening of values. The pilgrimage included Archbishop’s Liturgy, the evening of remembrance of Blessed Omelyan Kovch, guided tour of the monastery and a festive lunch.

In September 2019, 109 staff members of the penitentiary institutions with their families participated in the military pilgrimage to Zarvanytsia (Ternopil oblast). The pilgrimage program “Me and my household, we will serve the Lord” (Josh. 24,15) was built around the subject of a Christian family and Christian values, family as a model of Christ’s Church and a place of education, mutual understanding, comfort from the traumas of war and social aggression. In addition to the traditional spiritual and religious activities, the pilgrimage included thematic trainings, groups of spiritual sharing, and medical and psychological consultations by specialists. Over 2,000 people took part in the pilgrimage – military and penitentiary staff, war veterans, volunteers and families of those killed in action.

The project sponsored the head of the Department for Pastoral Care in the Armed Forces UGCC Bishop Mykhajlo Koltun and Rev. Andriy Zelinskyy to participate in two international conferences: the International Conference for the military chaplains in Rome in October 2019 and the 31st International Military Chiefs of Chaplains Conference in Berlin in January 2020.

As a culmination of the project, the Department, in cooperation with the All-Ukrainian Council of churches and religious organizations, contributed to the development of legislation “On Military Chaplaincy”. The Department held 14 working meetings to help pass the legislation, which was finally adopted by Ukraine’s Parliament on November 30, 2021.

With files from CNEWA