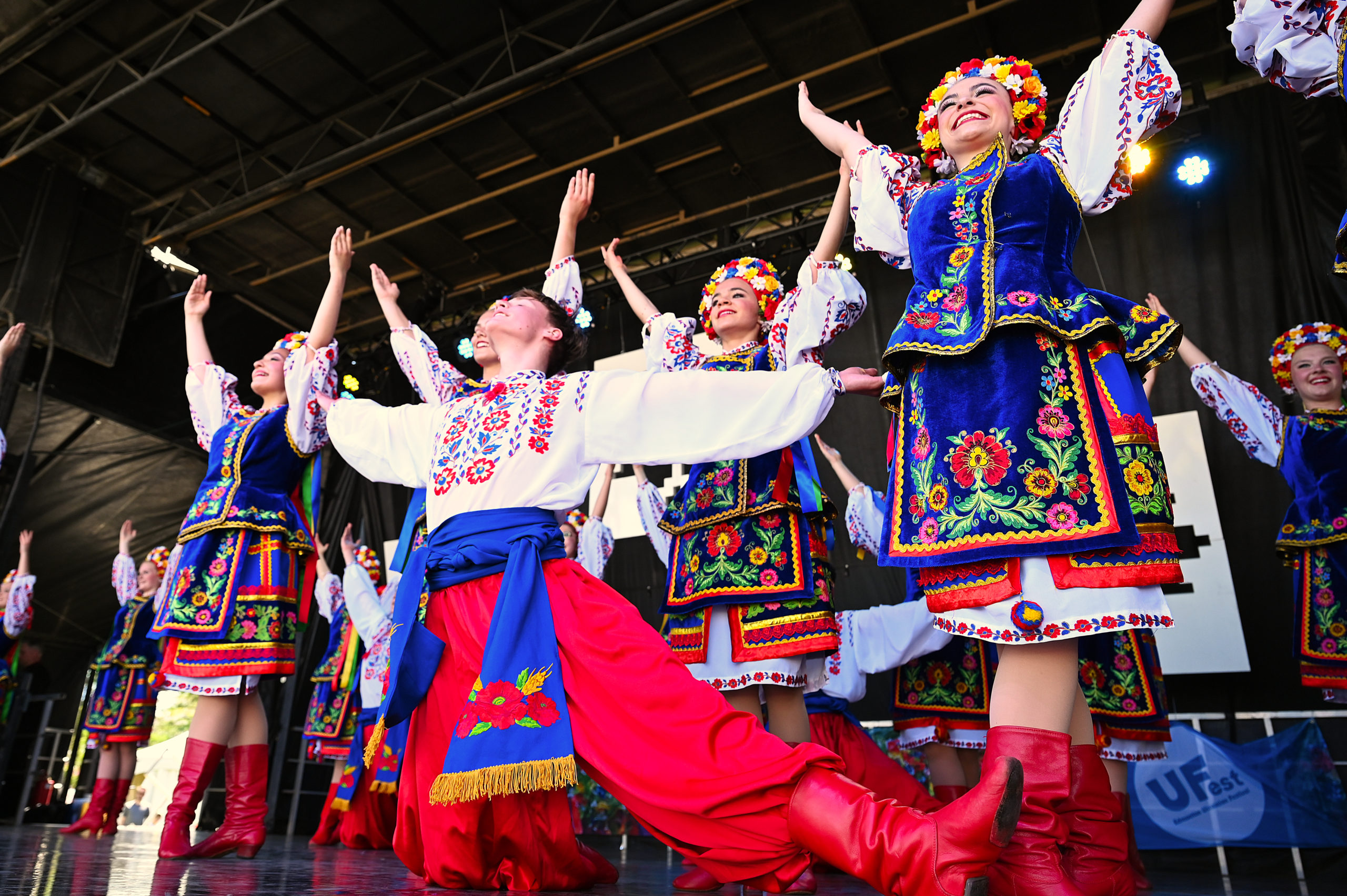 UFest Ukrainian Festival has finally returned to Edmonton — bigger and better — after a two-year absence caused by the Covid-19 pandemic.

Holding fast to national identity and culture is at the heart of a fierce resistance of Ukrainians worldwide, and the organizers hoped it was about time to lift the spirits of those uprooted by the Russian war who found shelter in Edmonton, Ukrainian Canadians, and all the other participants of the festival.

The two-day family-friendly celebration, featuring over 30 live performing groups including Ukrainian bands, choirs, dancers, and soloists, attracted tens of thousands of attendees to the city’s Borden Park on May 27-28.
Christine Teterenko, a President of the Edmonton Ukrainian Festival Society, explained that their preparation was rather different than the previous years for several reasons. The pandemic did not allow the festival to take place in 2020 and 2021. But events in Ukraine, of course, affected the organizers, too. 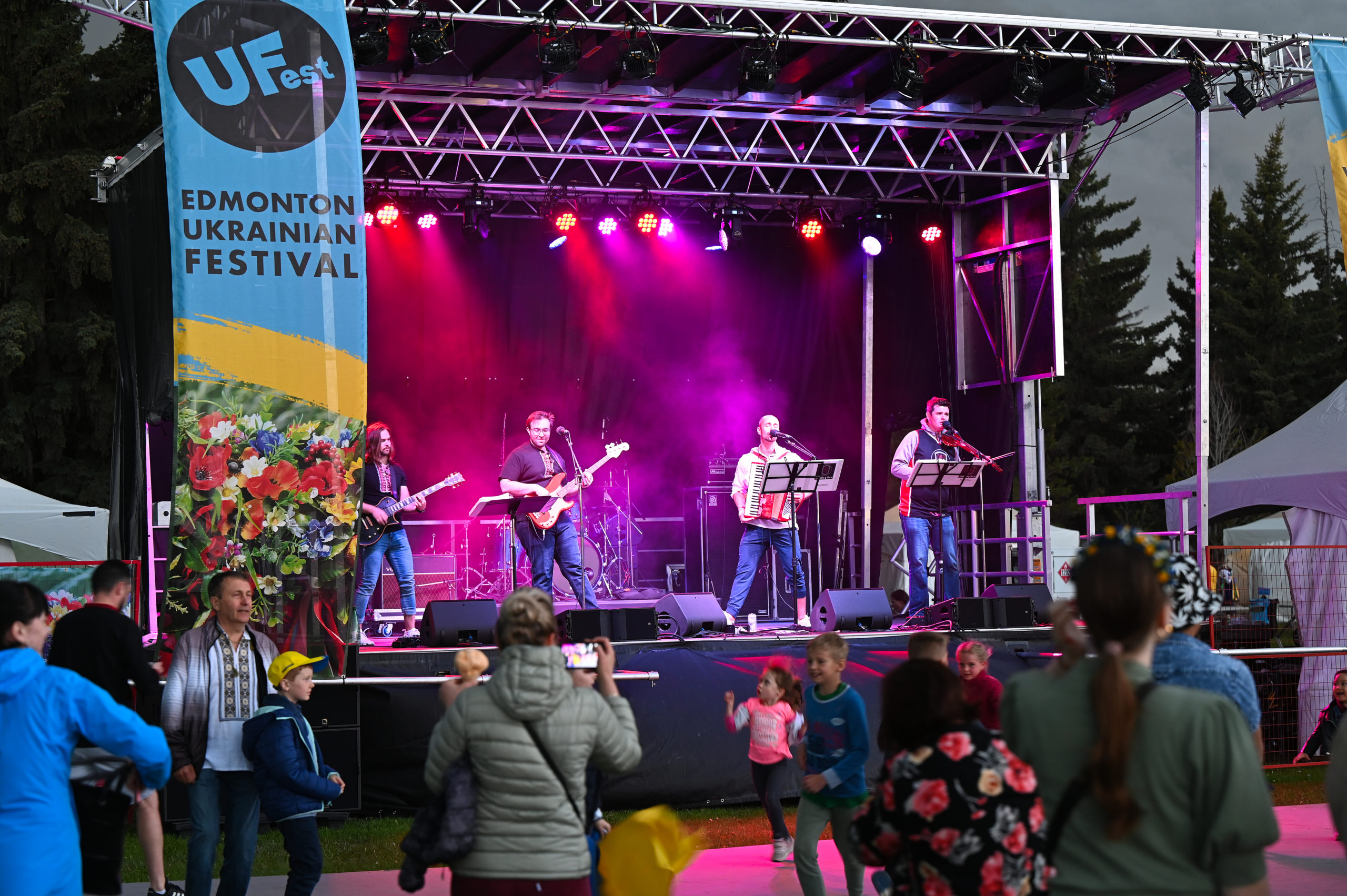 “When the war broke out in Ukraine in February, everything changed and we had to pivot,” Teterenko said. “We had a lot of organizations, and individuals, and groups who, maybe, were not scheduled to be involved this year, but who now wanted the presence at the festival.”

She says the festival team did have a conversation on whether to proceed with the event or not: “It was very emotional for a lot of people, some of our committee members themselves are from Ukraine and a couple of them had to step back because emotion overtook them. But in the end, we decided it would be better to have a presence and to have people aware and being able to show their support — whether they are Ukrainian or not — to come to an event like this.”

Seeing hundreds of people showing up right at the opening of the festival that moved to the outskirts of Borden Park this year was a relief for the team. “We had planned to expand but we didn’t expect this many people… People just started arriving and kept on coming.” 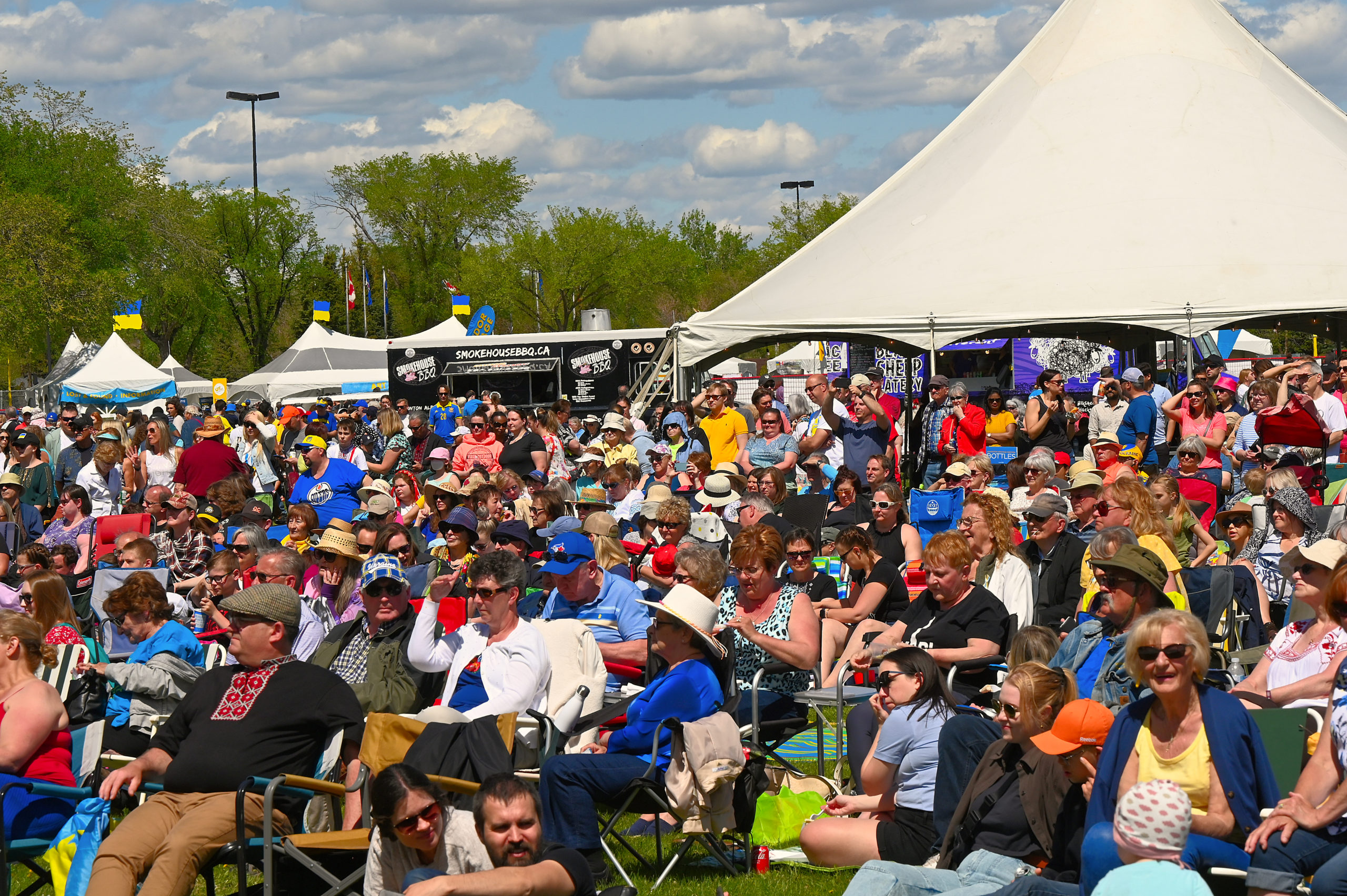 Some members of Edmonton’s Ukrainian community told NP-UN they felt that the UFest missed the mark in seeking a balance between celebration and acknowledgment of the war in Ukraine, undoubtfully one of the biggest tragedies in the country’s history, as only some vendors and individual presenters decided to bring attention to Russia’s invasion and ongoing attempted genocide.

UFest’s Vice President Daria Luciw responded to criticism: “The entire UFest organizing committee continues to keep Ukraine in our hearts and minds. This year we were driven to put on the festival to honour and recognize Ukrainian culture, now more so than ever. The Edmonton Ukrainian Festival Society’s mission is to organize a major annual Ukrainian festival in Edmonton. Our goal is to create a platform to share our culture with as many people as possible, particularly those of non-Ukrainian descent, to recognize that same culture currently under threat in Ukraine by Russia’s ongoing war. We are honoured that so many Albertans, individuals who may not otherwise have the opportunity, came to show their support of Ukraine and our community by attending Ufest. This was an opportunity to show our unwavering love and commitment to all things Ukrainian. The donation stations placed throughout the festival site raised funds for Ukrainian Canadian Social Services to support refugees who have recently arrived in the Edmonton Region. Along with donations from our vendors and volunteers, funds will help both Ukrainians settling here and with humanitarian aid to Ukraine.”

To make sure that UFest will attract large crowds, the organizers tried to keep in mind all the favourites. For the ears, there was an array of folk bands, including Polka Ramblers, Euphoria Ukrainian Band, Steppe, Zabava u Koli, Logan Alexis Singers of the Alexis First Nation, Trembita, and Millenia. For the taste buds, there were Ukrainian varenyky, kovbasa and a great variety of traditional desserts at Kava Cafe. For the feet, there were performances to dance to by famous folk-dancing companies, including the Shumka School of Dance, the Viter, Volya, Cheremosh, Dunai, and dozens of others. See the UFest website https://www.ufest.ca for the whole list of all the performers. 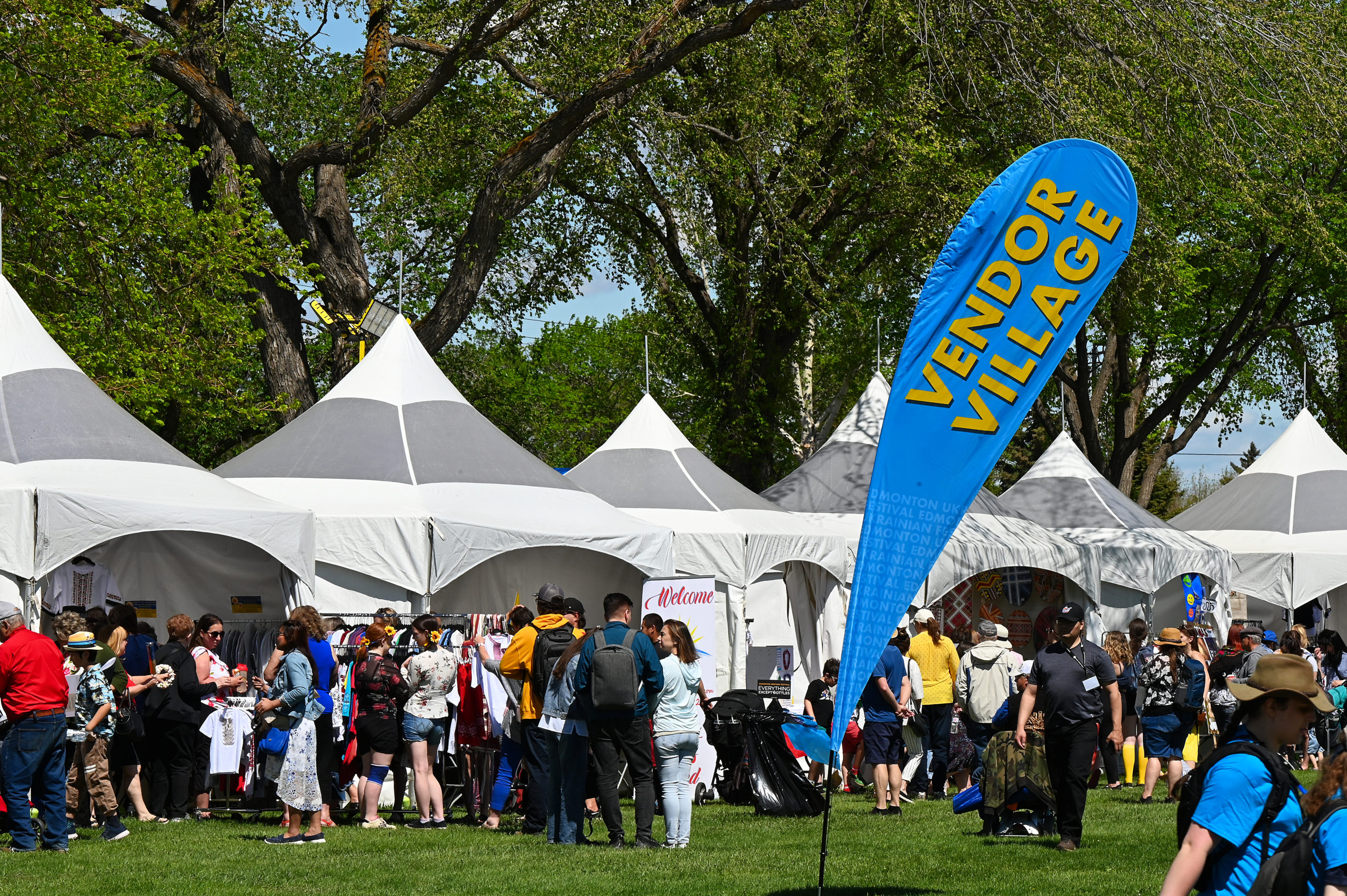 One of the favourite attractions – the photo booth where festival-goers could don a wreath and have their photo taken as a keepsake – also returned this year, as well as Vendor Village, Workshops, Community and Heritage Pavilions. The organizers also brought a petting zoo – thanks to Thistle Hill Farm Petting Zoo & Pony Rides, which quickly became a hit among the youngest attendees.

The organizers introduced a guest culture this year (something they had planned on doing in 2020) – a tradition they hope to carry on through future events. This year, the members of the Alexis Nakota Sioux Nation joined the festival to share their stories, histories, and teachings with the crowd. Running Thunder Dancers also performed on the second day of the festival.

While exploring around, the attendees could also check out booths set up by Firefighter Aid Ukraine, an Edmonton-based nonprofit that has been helping to outfit emergency workers in Ukraine with life-saving gear for the last eight years; and the Canadian Institute of Ukrainian Studies (CIUS) of the University of Alberta.

For Natalia Khanenko-Friesen, director of CIUS, this is the first UFest but she believes it is an important venue to support Ukraine and Ukraine’s cause and to “build stronger bridges between cultures and communities” in Edmonton.

Over 700 Ukrainians have arrived in Edmonton since Canada introduced the emergency CUAET program and many of them turned to the festival to find new friends and enjoy familiar festivities.
Tetyana Tsurka, who recently left Ukraine and now has settled in Edmonton, said her children especially enjoyed the festival. “It feels like everything is so familiar, just in English (instead of Ukrainian)! There’s tasty food, a packed program, and new connections, too,” she said, adding that events like this might help newcomers from Ukraine these days.

“It’s a difficult time (for people who arrive from Ukraine now) because you are in a new country, everything feels good, there are a lot of opportunities, but in your head, you are still in Ukraine, on that February day,” Tetyana added.